City needs to bring back narrower traffic lanes for safety

I'm guessing you probably don't think much about the width of car lanes. I can't blame you--they are just there. But right-sizing car lane widths is the cheapest and easiest way for us to improve walking, biking, and greening in our city. Here are a few details on how narrower lanes can be valuable and examples from 8th Street to Washington Ave where we can put this to use now.

For decades, 12-foot lanes or wider were common place on our city streets. Minneapolis and Hennepin County have recently moved to using 11-foot lanes as pretty standard for city streets. Going narrower than 11 feet has typically been a struggle. But various research and national practice shows that 10-foot wide lanes should be used much more in Minneapolis.

A great City Lab article lays out the details perfectly. It references a 2015 study by Toronto (they have ice and snow!) civil engineer Dewan Masud Karim that found that lane widths of 9.8-10.5 feet (3-3.25 meters) are generally the safest for urban streets (high truck or bus volumes warrant consideration for slightly wider lanes). 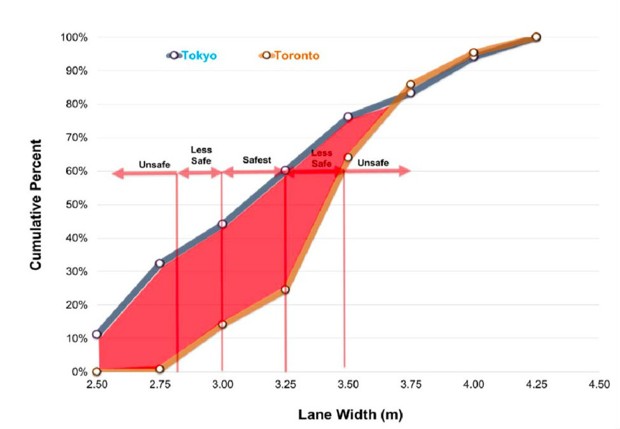 "The findings demonstrate that if lane widths in urban areas were reduced to less than the current guidelines of 3.5m [11.5 feet], the result could be a safer environment for all street users. Given the empirical evidence that favours ‘narrower is safer’, the ‘wider is safer’ approach based on intuition should be discarded once and for all. Narrower lane width, combined with other livable streets elements in urban areas, result in less aggressive driving and the ability to slow or stop a vehicle over shorter distances to avoid a collision."

And another study from 2007 looking at lane widths and safety, which included Minnesota streets, found:

"A safety evaluation of lane widths for arterial roadway segments found no indication, except in limited cases, that the use of narrower lanes [10 feet] increases crash frequencies. The lane width effects in the analyses conducted were generally either not statistically significant or indicated that narrower lanes were associated with lower rather than higher crash frequencies."

This aligns with the National Association of City Transportation Officials (Minneapolis is a NACTO member city) Urban Street Design Guide, which says:

"Lane widths of 10 feet are appropriate in urban areas and have a positive impact on a street’s safety without impacting traffic operations. For designated truck or transit routes, one travel lane of 11 feet may be used in each direction. In select cases, narrower travel lanes (9–9.5 feet) can be effective as through lanes in conjunction with a turn lane."

In addition to being at least as safe overall, narrower lanes have been shown to reduce speeding, they shorten crossing distances for people walking and in wheelchairs, and they provide space for other things like wider sidewalks, bike lanes, or more greening.

Where we are at in Minnesota on lane widths

Nationally and in Minnesota, for decades there has generally been a feeling (it is literally a feeling, since there aren't studies to back it up) that wider car lanes are better. Messages I often here include: "Drivers need wiggle room so that they don't run into another car or the curb." "We need space for emergency vehicles to get through." "The snow has to go somewhere." "Minnesota has safer roads because of our (wider) standards."

That feeling was written in stone--or in our case, Minnesota's State Aid Design Standards, which define what local streets that receive state funding have to look like. I first learned about the State Aid Standards in 2009 when I was leading the Minnesota Complete Streets Coalition working to pass a state law to bring more focus on walking, biking, transit, and wheelchair access and safety. These Standards, unique to Minnesota, have been limiting the ability of local communities to build streets for their local needs. They take a wider is better mentality and said that is the case in downtown Minneapolis, Main Street Red Wing, and a rural farm-to-market road. Cities and counties that wanted to do narrower traffic lanes in line with what many other places do around the country had to receive a variance, which added cost, delay, and liability to a project. Most engineers and planners wouldn't bother. They would just build in wider lanes even if it meant a less good street.

After 7 years of work, we finally are on the cusp of changes to the State Aid Standards. A bi-partisan bill in the 2015 session (thanks to Senator Scott Dibble, the Bicycle Alliance of Minnesota and other partners, MnDOT, and the bill authors Sen. Schmidt and Rep. Kelly (both of Red Wing), directed MnDOT to align the State Aid Standards with their own Road Design Manual. I participated with many other voices in a stakeholder group for that alignment process and we were able to mostly come to agreement with local engineers on significant changes. You can see a full report on changes here. It includes aligning Minnesota with national standards in important ways, including allowing cities and counties to use:

These changes are just awaiting the final rule making process, but MnDOT is doing administrative approvals for designs within the soon-to-be standards.

Minneapolis looking at lane widths too

Minneapolis has made some strides on more appropriate narrower lanes, but there is still more work to do. I'm encouraged that Public Works staff have said they are looking at lane widths again. Things are evolving quickly with Complete Streets policy in place and new and developing staff leaders, including Director Robin Hutcheson.

The good includes 10-foot lanes on part of 3rd Avenue S and on a number of streets where bike lanes have been added recently or are planned to be added. When there are unprotected bike lanes, the City seems to generally be defaulting to 10-foot lanes adjacent to those bike lanes.

But recent reconstruction projects like 8th Street in downtown, Hennepin Avenue downtown and in Uptown, 18th Avenue Northeast, and others show that 11-foot lanes are generally the default. And for lanes adjacent to curbs, 13-foot lanes are always used. The City's Street and Sidewalk Design Guidelines list 11 or 12-foot lanes as desired in most settings and say that 10.5-foot lanes are the absolute minimum and only in certain limited circumstances. The City still has its own separate guidelines and has not adopted the NACTO Urban Street Design Guide like a number of other cities.

Hennepin County, who was very supportive of additional flexibility in the State Aid Standards, has often been resistant to narrower lanes. They have used 10.8-foot lanes in several locations, including Washington Avenue in downtown and parts of Lake Street, but we had disagreements over lane widths on Glenwood Avenue and we've been trying to get the County to explore options for Washington Avenue in the Mill District that would include slightly narrower lanes. We hope we can continue to keep discussions going with the County since many of the most challenging streets for safety are County roads.

Lanes widths matter for literally every project, but here are three examples on downtown projects that are being worked on this year:

8th Street in the heart of downtown will be reconstructed starting in 2018. There are some good things in the current design (greening and wider sidewalks), but whether it feel like a freeway on ramp or a city street will depend in part on the width of the car lanes. Currently, they are proposed as 13-feet along the curbs and 11-feet when not near a curb. That is too wide. It's unnecessary. There are no benefits and there will be costs in speeding traffic, less safety for people walking, and less space for greening. I hope the City will narrow the lanes before a final layout. The Pedestrian Advisory Committee has also asked for narrower lanes. 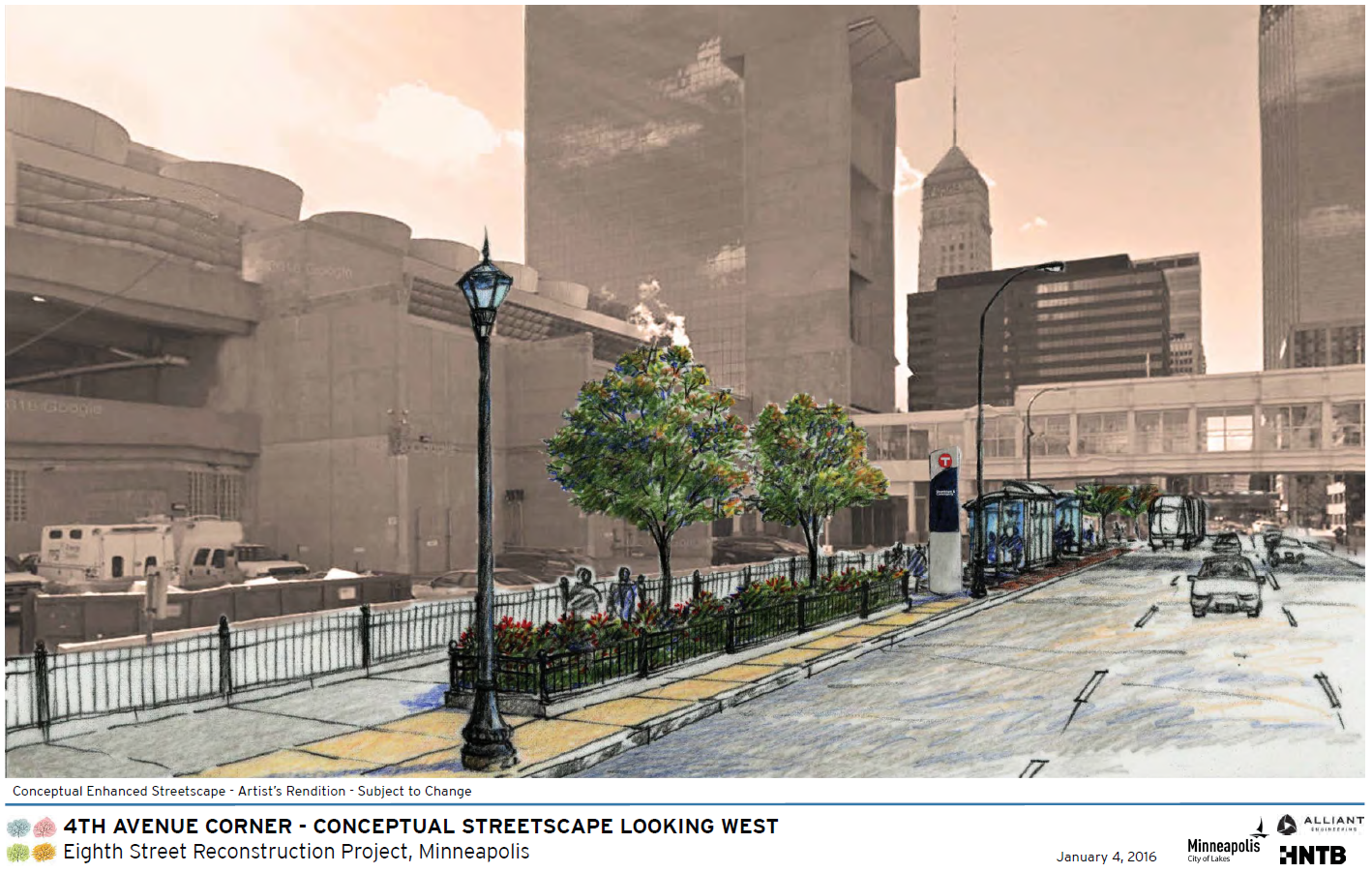 Washington Avenue in the Mill District

Hennepin County is installing curb protected bike lanes on Washington from Hennepin Ave to 5th Ave S this year. They are going to be great (10.8-foot lanes are part of that). We've been trying to get these lanes to connect to the U of M with protected bike lanes the whole way. The sticking point has been lane widths as our volunteer Tyler outlined last year. Using even 10.5-foot lanes on Washington likely makes a quality parking protected bike lane possible. As research shows, those lanes would also likely make it safer for everyone. We are happy that conversations are happening here and we hope the County and City can sort out a plan to be implemented this summer! 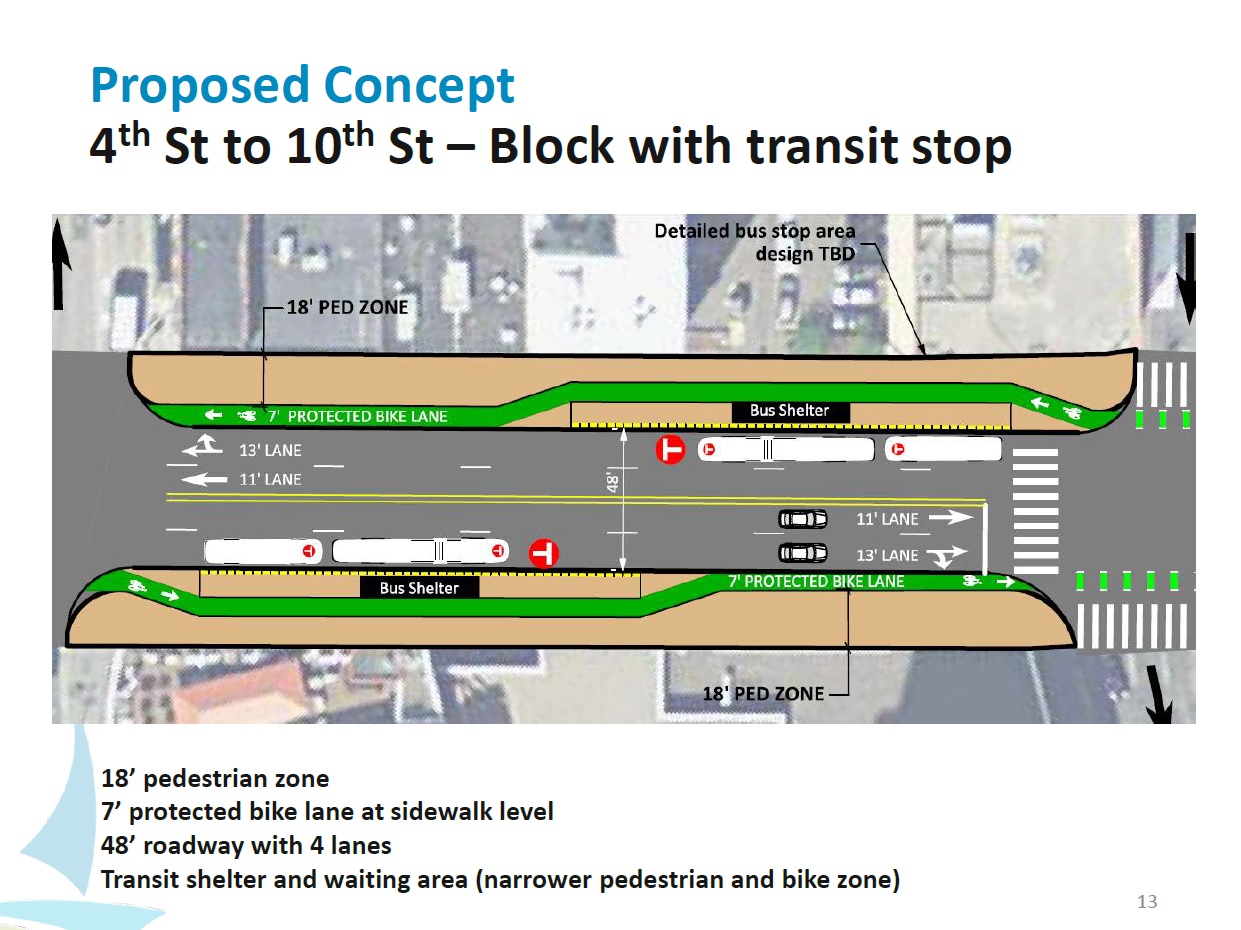