Multimodal Streets, You Complete Me

Attendees discussed Minneapolis’ Complete Streets Policy at the February 18th meeting of the Engineering Subcommitee of Bicycle Advisory Committee (BAC) and some pushed policymakers to craft a bold policy that does more to protect and prioritize bicyclists and pedestrians on city streets rather than an aspirational document that does nothing to change the reality on the street.

“I think [the plan] explicitly said that complete streets policy doesn’t prioritize one type of road user above another type of user, and I think it should.” BAC member Robin Garwood said. “I think it has to in order to make sense, in order to be something that actually works, and in order to acknowledge the physical reality that pedestrians and bicyclists are easier to kill when they’re on a street than people in other modes of transportation.”

Minneapolis Bicycle and Pedestrian Coordinator Sean Murphy agreed and pointed out that different parts of the plan contradicted each other.

“Instead of skirting around the issue, we should have the Minneapolis City Council say that we are actually going to prioritize the most vulnerable users.” Garwood said. “We are going to prioritize people in wheelchairs and schoolchildren and bicyclists and pedestrians”

Prioritizing these users inevitably involves some trade offs from other users. By and large, policy makers have not tackled these tough decisions.

“We make decision after decision that favors automobiles, and freight, and driving quickly, and no congestion, and ample parking, instead of other decisions, because we’re all scared of taking something away from those modes, because we haven’t ever said yes that’s what we are actually doing,” Garwood said. “So I think that one of the reasons the concept of a complete streets policy exists is to say we’ve been giving too much to the car for too long, and we should take some of it back. The extent to which our policy does that is the extent to which I think it’s a success.”

Minneapolis transportation planner Anna Fliftoft invited Dan Herber from the Pedestrian Advisory Committee to attend the meeting to contribute to the complete streets discussion. Herber stressed that any overarching policy document should tie in with the city’s climate plan.

“I certainly don’t blame Public Works for the original draft, but I do think that, as Robin said, the idea of just capturing design guidelines in the bike and ped plan is not going to get you to accomplish the Climate Action Plan. It's not going to happen. You're not going to increase modal share for bikes by ignoring the broader concepts, and you're not going to get there by not addressing land use and density issues” Herber said. “I think it’s unfair to the City Council not to present them with a document that lets them know that their climate action plan is just an worthless piece of paper unless they consider modal priorities.”

“And if they want a future of greatly increased multimodal share for bicyclists, pedestrians, and cleaner air, and a planet that’s not on fire, we need to work that into a master thing, and I don't know if it's complete streets. Maybe we've called it complete streets because that's the in thing. I personally think its a ten year, twenty year old concept.”

He urged the city to go above and beyond what other municipalities have done with their Complete Streets policies.

“I don’t see why we can’t have a better model. Why don’t we become a model for the rest of country by adopting some of these broader ideas, and pulling together more plans and helping to achieve this modal shift that I do think the policy decision makers really do want.”


Is Washington Avenue A Complete Street? 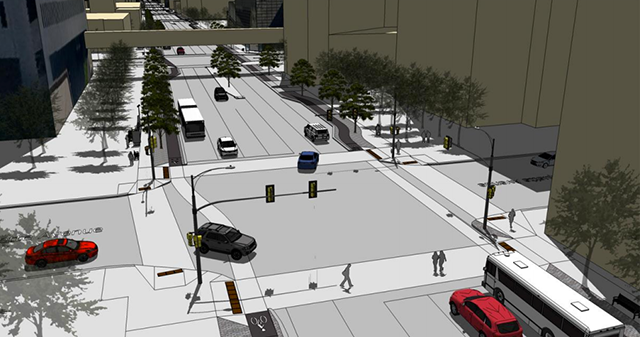 Kimley Horn and Associates via Minnpost

Garwood mentioned how Hennepin County has its own complete streets policy but its redesign of Washington Avenue reduced the width of the sidewalk to 7.5 feet and left the crossing distance at a still quite long 6 car lanes, despite cries from the PAC to reduce it to 5 lanes..

Herber argued policy makers are squandering his money as a taxpayer by not addressing pedestrian needs.

“I am increasingly frustrated by new redesigned streets,” Herber said. “It’s a lot of money that isn’t putting pedestrians on the sidewalk. Washington Avenue is still going to be the same thing. It’s still going to be a very ugly space for pedestrians but we are still going to spend millions of dollars on it, because we are getting it wrong now with the design, with the number of lanes in particular.”

BAC members were happy about the protected bike lane in the Washington Avenue plan.

There was some consternation that the city of Minneapolis wouldn’t have its plan done before Hennepin County’s plan so that the bike transit corridors selected would match. Officials from the city and county did assure the BAC they would be in regular contact and stay on the same page.