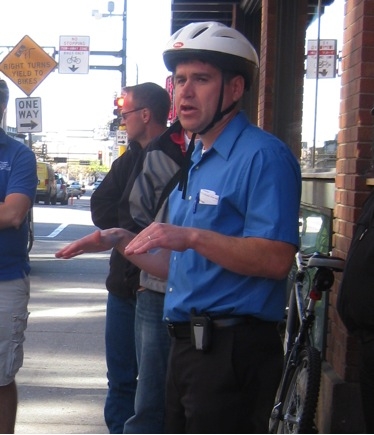 Steve has been at the forefront of innovative, safe, and bicycle-friendly street design in Minneapolis. Some examples:

• Steve was integral to finding the solution for a serious problem at the intersection of the Midtown Greenway and 28th Street East, where many drivers were ignoring pavement markings. Steve found the funding for a permanent refuge island that physically narrows the road to one lane in each direction, dramatically improving safety for users of one of the state's most heavily-traveled bike highways.

• After bicyclist Audrey Hull was hit and killed by a turning semi truck on 15th Avenue Southeast, Steve found the funds for a new, safety-enhancing treatment with a new pavement marking material never before used in Minneapolis. 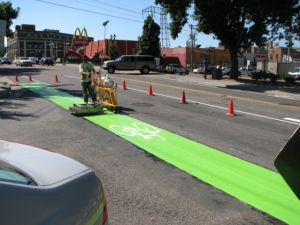 • Steve has a genuine and documented interest in making clear to his colleagues in Public Works, elected officials, the media, and the general public why bicycling is important to reaching multiple adopted goals and policies.

• Steve doesn't just design good bicycle facilities, he gets on a bike and rides the corridors he's working on, to get a feel for the bicyclist's experience on the street.

• Steve has overseen the staff working on the tremendously successful Non-Motorized Transportation Pilot, and continues to supervise the Bicycle and Pedestrian Coordinator.

For these reasons and more, we are proud to award Steve Mosing the first annual Minneapolis Bicycle Coalition Bike Champion Award. Henceforth, this new award will be presented annually to an individual who has gone to exceptional lengths to keep biking safe, accessible, and enjoyable in the City of Minneapolis.