Minnehaha Avenue: What You Can Do!

Minnehaha and Avenue will be fully reconstructed from Lake Street to 46th Street South in Summer 2014, and designs for the reconstruction are being finalized now, with key meetings and decision points in the coming days and weeks. A full reconstruction provides a rare opportunity to start with a 'blank slate' and design a street to be safe and inviting for all people for the next 30-50 years.

The Minneapolis Bicycle Coalition is supporting a cycle track--or protected bike lane--on Minnehaha because of worldwide evidence that well-designed cycle tracks attract more people to bicycle than bike lanes that are not protected. You can learn more here: Minnehaha Cycle Track Fact Sheet See below for an example of a cycletrack in Vancouver. 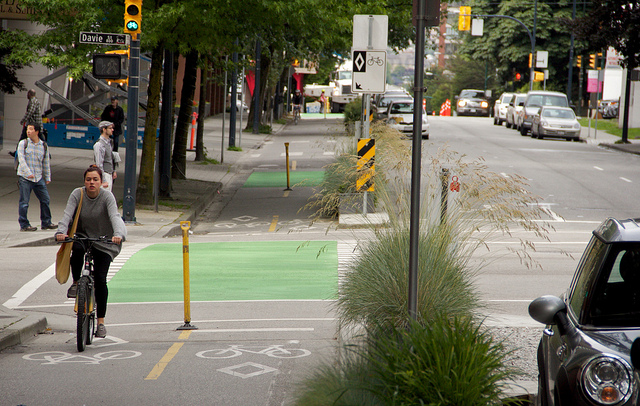 Decision-Makers: County Commissioner Peter McLaughlin is the most important decision-maker on this project. He represents the area on the county board, and this is a county project. Council Member Colvin Roy is a key decision-maker on this project, because roughly half of the project falls within her Ward (12), and she chairs the Transportation and Public Works committee of the City Council. Gary Schiff is also a key stakeholder, because roughly half of the project is in Ward 9, which he represents.  Find your Councilmember.

What you can do: Are you interested in the redesign? Well, make your voice heard! You can contact Commissioner McLaughlin, Councilmember Sandy Colvin Roy, and Councilmember Schiff by phone or email to let them know that bicycle safety is an important part of the Minnehaha Avenue re-design plan and that it matters to you.

Need some tips? If you have never contacted an elected official before, don’t be nervous. Elected officials are grateful to hear from constituents and are interested in the issues that matter to you. If you want so say something simple, you could say “please do everything you can to make sure that Minnehaha Avenue is rebuilt with cycle tracks.”

Please include a personal story of why this is important to you. You could say something along the lines of the following:

1.    I do not feel comfortable biking with family on the bike lanes that are currently in place on Minnehaha Avenue. The traffic on Minnehaha is too fast, and a narrower street with a separate place for biking would be much safer for everyone.

2.    I would be more likely to visit the businesses on Minnehaha if there were a cycle track, and it would make Minnehaha the obvious place to take visitors from out-of-town.

3.    The cycle track would make Minnehaha a great route for getting from the Midtown

Greenway to Minnehaha Park – both of which are great places for family bike rides.