Last week, the Star Tribune reported that the Minneapolis Police Department (MPD) is beginning to track race and/or ethnicity of the people they stop. This includes bicyclists and pedestrians.

The driving factor for this change is the pressure the MPD has felt from organizations such as Neighborhoods Organizing for Change and the ACLU that have highlighted the racial disparities in enforcing laws and the lack of formal tracking of whom the police stop. In other words, there is a lot of anecdotal evidence that people of color receive more citations than white people, but until now, it has not been officially tracked by the police department. Currently, citation data does not exist that either confirms or denies widespread racial disparities.

Take for example a new report on Minneapolis bicycle citations and related arrests to be released in October. A team of Minneapolis Bicycle Coalition volunteers (including myself) recently completed a research project where we collected data from all bicycle-related citations given out between 2009 and 2015. We were curious where and why bicyclists were getting citations in this city. But we were also interested in knowing who was receiving the majority of citations.

Although gender data showed a clear male majority (sorry guys), we could not make similar conclusions on the race and/or ethnicity of a person. This is because the data, collected through the Fourth District Court, did not include race or ethnicity information. The only source of information that included race/ethnicity demographics was the CAPRS reports (shorthand for police reports that are produced through the police in-car computers). So we also collected all police reports that were produced from an initial bicycle stop. Although the number of police reports were a small sample of all bicycle citations, it did give us some clues as to how people of color are treated on their bicycles.

Our data collection cannot paint a full picture of how police and bicyclists interact. We have heard anecdotes about police-bicycle interactions that will not show up in our citation data because the bicyclist did not get a bicycle-related citation. Still, we are aware that race continues to play a role in how bicyclists are treated on the roads. (Trigger warning: police violence, yelling). We are keenly aware of this today, watching a newly circulating video showing a 15-year-old Black bicyclist getting pepper-sprayed after refusing medical treatment for a bicycle-car collision in Maryland.

We do not want to assume such violent and reactionary events are happening here in Minneapolis. We also do not want to assume that people of color are getting the majority of bicycle citations (like they are in Tampa Bay, Florida). And so we are relieved that the biggest recommendation spurred from our research is being addressed: track the race/ethnicity of people being stopped on their bicycles. This way we can see what is truly going on when police interact with bicyclists.

Our report will be released in early October with a public presentation on October 18th. Please follow the Minneapolis Bicycle Coalition on Facebook for announcements on the public report release and presentation. 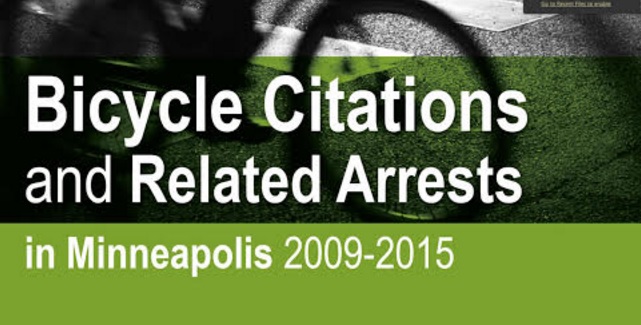