At its November meeting on Tuesday, the Engineering Subcommittee of the Minneapolis Bicycle Advisory Committee (BAC) passed a motion to request $750,000 for a protected bikeway fund in the 2014 City of Minneapolis Budget and continue to recommend it fund the North Minneapolis Greenway as its highest priority. 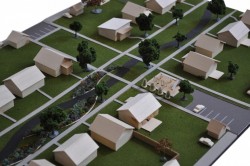 This model illustrates the concept for a linear park design replacing a low traffic street in North MInneapolis.

The full BAC will have to approve the motion to make it official. Last year, the BAC asked the city for $500,000 for a Cycle Track Fund, but that item was not included in the city's budget.

Minneapolis Bicycle and Pedestrian Coordinator Sean Murphy pointed out that the idea buttressing the request is that the 2025 Climate Action Plan the city adopted calls for thirty miles of cycle tracks by 2025. The Cycle Track Fund was intended to keep the city building cycle tracks on schedule. Currently, the city has less than one mile of cycle tracks (1st Ave N between Washington and 8th). The BAC figured the city should be building at least 3 miles of cycle tracks per year to keep that timeline and hoped $500,000 would be enough to get that pace started.

David Peterson, the Minneapolis Public Works city planner tasked with bicycle infrastructure, said the bare minimum necessary to build a cycle track is $120,000/mile, but that would cover only painting and traffic posts.

Members agreed that more money would be nice to fund further enhancements, such as trees or traffic signals. Moreover, having a bigger fund may allow even more than 3 miles of cycle track per year.

Bike advocates have made cycle tracks a focal point because most bicyclists find them safer and more comfortable to use than unprotected lanes. The MBC’s own blogger extraordinaire Janne gave cycle tracks in Chicago a glowing review.

The subcommittee agreed to use the phrase "protected bikeway" rather than cycle track to allow greater flexiblity with funds.

Perhaps the high turnover at the city council (7 of 13 members are new) and a new mayor will give protected bikeway funding a better shot in the 2014 budget than in the 2013.

In addition to the funding request, the meeting also covered the Intercity Regional Trail, which will connect Minneapolis to Bloomington via Richfield. Engineering Subcommittee members saw the plans, which are soon to be finalized, and got their last chance to offer alterations.

The subcommittee members reviewed the 2013 and 2014 Repaving and Sealcoating Lists to discuss the Minneapolis Public Works recommendations for bike improvements. Franklin Ave SE (the infamous hill east of the Mississippi heading into Saint Paul) garnered some discussion, and members decided to up the recommendation for a bike lane only on the uphill climbing side to bike lanes on both sides.

Minneapolis Bicycle and Pedestrian Coordinator Sean Murphy ran through the list of the 2014-2018 Capital Improvement Program Projects with new bike components. Minneapolis Public Works is seeking to add close to 7 miles of bike facilities to the bike network through the CIP projects. 26th and 28th St in South Minneapolis and 26th Ave N account for the bulk of the proposed bike facilities.

BAC members did not go into detail on the North Minneapolis Greenway, which had been covered previously. For more on that greenway (specifically reservations some have because of greenway-induced gentrification) check out the article Scott wrote back in July.