The Southwest LRT: a brief history

The idea of a light rail transit corridor connecting the wealthy southwestern suburbs to downtown Minneapolis was born in 1988, in a plan by Hennepin County (PDF). As the plan for the train rolls toward actualization, resistance to the plan has gained momentum. The grassroots organization LRT Done Right demands no colocation and asks the Met Council to re-examine the alignment of the SWLRT, and Nick Magrino from Streets.mn (and many others) would prefer to start the planning process from scratch, and re-route the SWLRT through dense neighborhoods in south Minneapolis. We've written about our desire to see SWLRT built (it will be a great project) while protecting the Kenilworth Trail here on our blog. This opposition has caused the Met Council to postpone decisions, and just this week, Hennepin County asked them to bring in more consultants. The project seems to be slowing down.

So now might be a good time to take a look at the prospective route. On Wednesday, August 28th, the Minneapolis Bicycle Advisory Committee (BAC) and a few hangers-on went on a bike tour of the proposed route for the Southwest Light Rail Transit (SWLRT) corridor, guided by Sophia Ginis from the Met Council, Peter Wagenius from Mayor Rybak's office, and Simon Blenski from the City of Minneapolis. The tour stopped at the Van White Memorial Bridge, the junction of the Cedar Lake and Kenilworth trails (where a Penn Avenue station will be built), and the Kenilworth corridor's infamous pinch point just north of where it meets the Midtown Greenway. 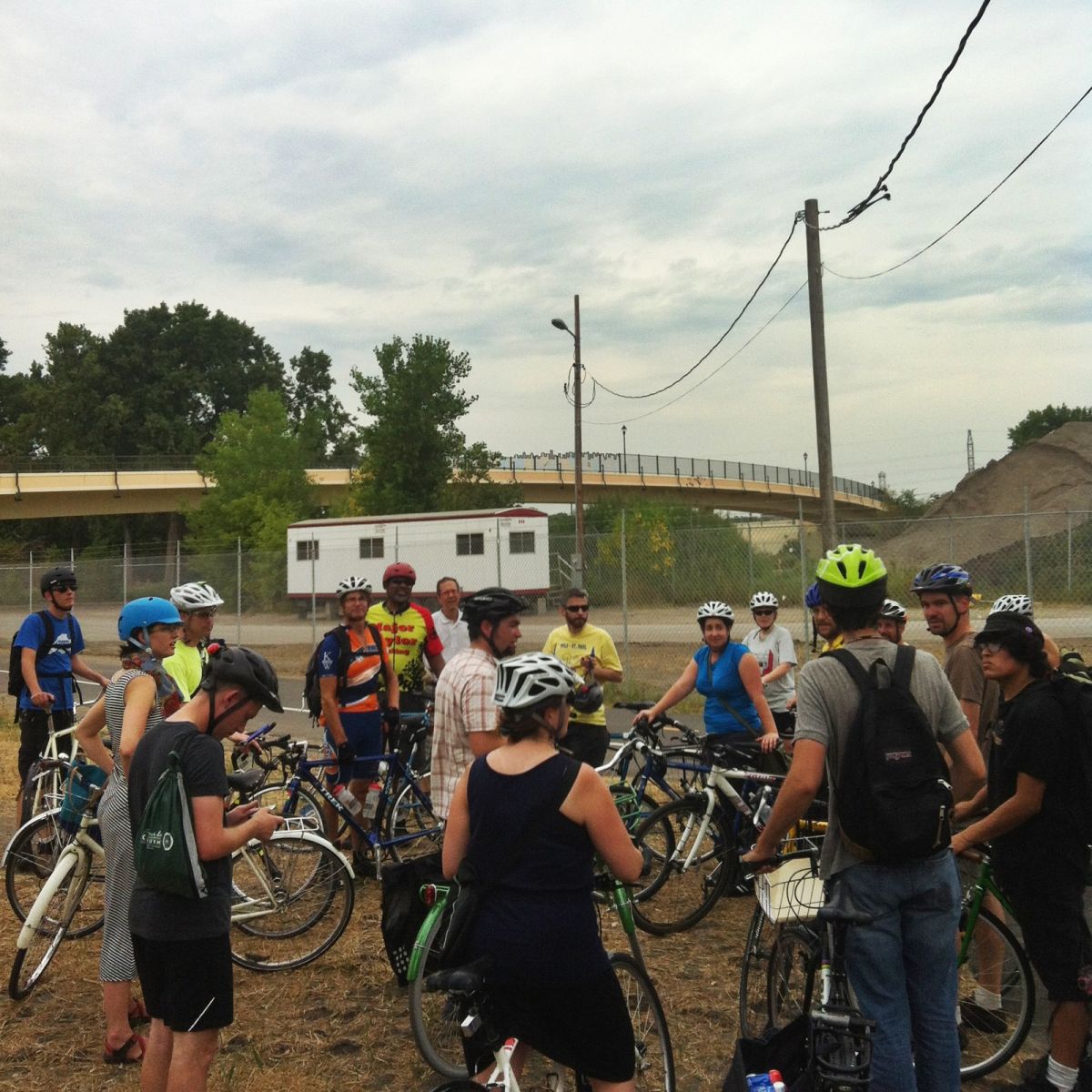 The recently-opened Van White Bridge passes over the site of a planned SWLRT station. An elevator will connect the bridge and the station, and there is no plan for a nearby parking lot. The Met Council is "not assuming this will be a high-ridership station," Sophia said. The authorities have been talking to developers, who plan to build an office and residential complex near the station. This future development, along with the prospect of better connection to other parts of Minneapolis, excites the Harrison neighborhood.

The photograph to the left shows the Van White Memorial Bridge in the background. The train station would be under the bridge's highest point.

With the Kenwood water tower looming to our south, we stopped near the site of the future Penn Avenue station. It was here that the tour guides shared some hard truths about the SWLRT plan: 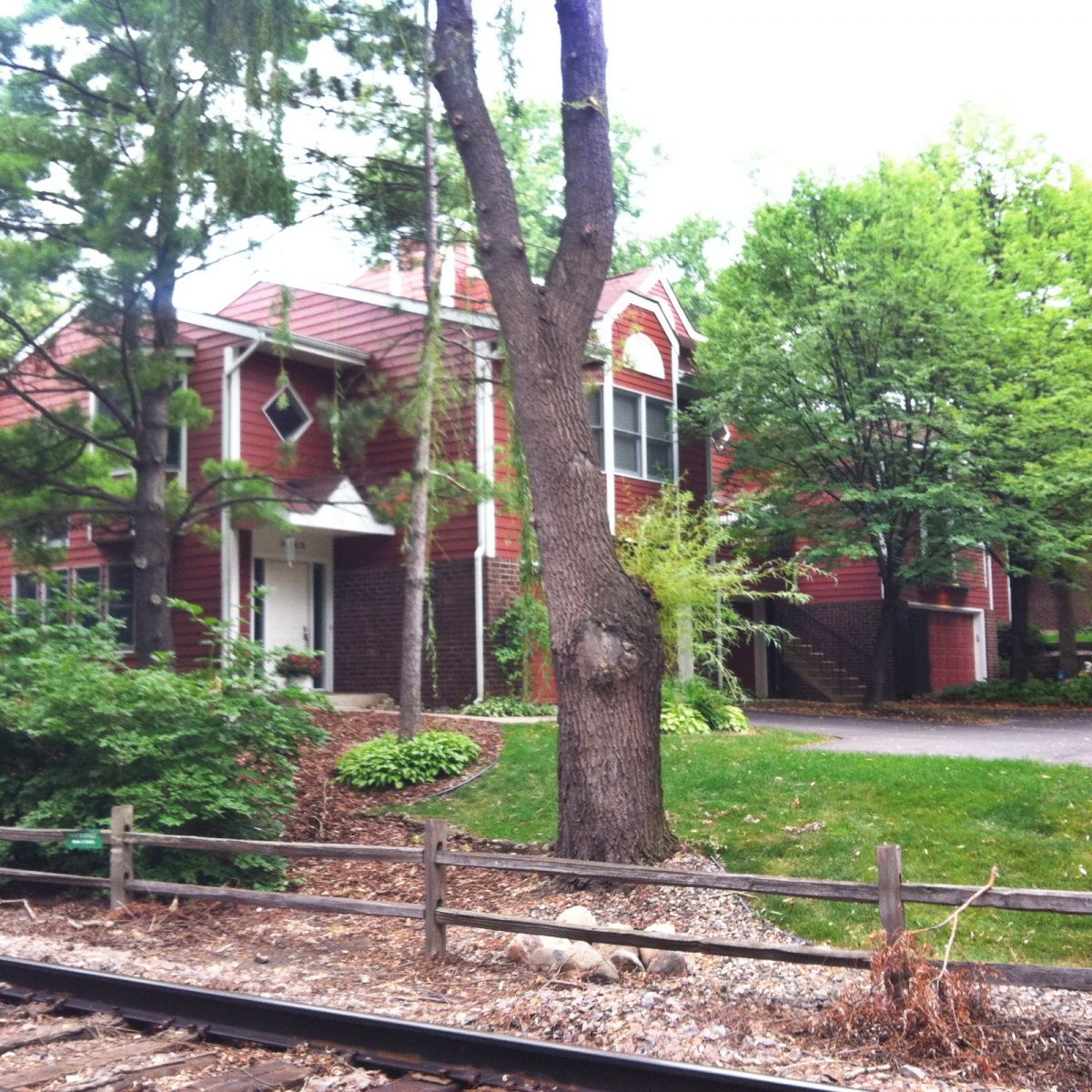 Just north of where the Kenilworth Trail meets the Midtown Greenway, the trail is squeezed between townhomes on one side and condominiums on the other, leaving only 54 feet to accomodate freight rail, LRT, and the trail's non-motorized users. There are three options, all of which offend some interested parties, and most of which will result in lawsuits.


The photograph above and to the right shows the townhomes that abut the Kenilworth corridor at its narrowest point. If you'd like to see larger versions and more photos from the bike ride, click here.

MinnPost and Streets.mn are great resources for staying informed on the latest SWLRT developments, and we'll let you know about possible impacts to bike infrastructure. Be sure to tell your Metropolitan Council member if you have concerns.

UPDATE 9/4: The Star Tribune reports that the Met Council has nixed the deep tunnel option, citing the cost of the project.

UPDATE 9/5: Since the Met Council has removed the possibility of a deep tunnel, LRT Done Right has changed their position (read about it here).