The engineering subcommittee went over Saint Paul’s bikeways master plan and commented on the quality of connections to the Minneapolis bike facility network (at the request of Saint Paul public works). Generally connections between each city’s bike arteries made sense since Saint Paul planners could base their decisions off of Minneapolis’ existing and planned bikeway network. 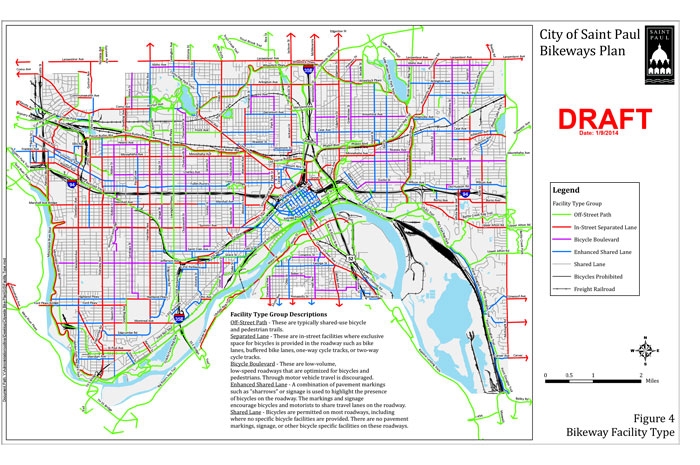 Members complimented the plan, but some believed a gap in the planned bikeway network would exist for bicyclists seeking to connect to Charles Avenue via Franklin Avenue or University Avenue. BAC member Bob Hain and others expected it would be difficult for cyclists to connect from Minneapolis to the bikeway planned on Charles Avenue two blocks north of University Avenue.

Saint Paul Bicycle Coalition co-chair Andy Singer tackled this very issue in a Streets.mn post published a few days after the meeting. Singer suggested University be reduced from 4 lanes to 2 lanes to allow room for bike lanes and more parking. Read more about that here.

Minneapolis Transportation Planner Anna Fliftoft updated the subcommittee on the city’s bike master plan. Fliftoft focused on defining the city’s existing low stress network, which includes the streets that bicyclists find comfortable to navigate. Defining the existing low stress network would help the city to identify the gaps in its network so it can target streets to fill in those gaps.

Fliftoft said Public Works staff looked at motor vehicles traffic volumes, the number of through traffic lanes, and the quality of bicycle amenities on the street to qualify the street for inclusion in the low stress network. Fliftoft said they also plan to look at bicycle traffic counts in order to analyze the safety in numbers aspect that can make streets feel safer for bicyclists.

Minneapolis Bicycle Coalition president Ethan Fawley commended Fliftoft for her in-depth analysis, but warned against overlooking other factors that make a big difference on the street’s stress level for bicyclists. One factor that was widely discussed was bus traffic. BAC members agreed that this complex issue can sometimes depend on the particular street. Bus traffic on Nicollet Mall, for example, might not increase stress that much since Nicollet prohibits most vehicle traffic (although busses do slow bicyclists down.) On the other hand, high frequency bus routes intermixed with vehicle traffic and parking such as on Fremont can make a street feel stressful even if its has a bike lane and relatively low vehicle counts.

Fliftoft said she will continue to update the engineering subcommittee as they continue to work on the Minneapolis Bicycle Master Plan.

In January, the UDA allocated $10,000 to fund the wayfinding plan. Ted Tucker said the UDA was able to secure $125,000 per year from the Vikings Good Neighbor Fund to help pay for the improvements. The plan calls for the City of Minneapolis and other sponsors to pay for the rest. The amount of funding will determine how elaborate the signs will be, Tucker said.

Tucker also said the UDA would return to get feedback on the wayfinding plan to help find the best location for wayfinding signs.

Public Works bicycle planner Simon Blenski alerted the subcommittee to a bike project he is working on on Hennepin Avenue between 12th and 16th Avenues (near Loring Park). The plan would add bike lanes to this section, but they would disappear under the Interstate 94 overpass, where two left turns lanes allow southbound motorists to stay on Hennepin and two through lanes to continue westward on Dunwoody.

Fawley and others recommended they explore keeping the bike lane under the overpass and westward onto Dunwoody by eliminating one through lane. Members commented that low traffic counts should make this feasible, although some worried that rush hour traffic would get backed up. This alignment would help cyclists more comfortably and safely reach the Cedar Lake Trail and the bikeway on Van White Boulevard.

Blenski said he would explore this option and report back to the subcommittee.