At its October 15th meeting, the BAC Engineering Subcommittee heard a report on West River Parkway improvement plans, reviewed proposed relocation routes of the Kenilworth corridor during Southwest LRT construction, and discussed plans to add a connection to the Dinkytown trail actually in the Dinkytown business district.

Eric Newman (who was recently appointed to the Citizen Advisory Committee of the Central Mississippi Riverfront Regional Park and West River Parkway) presented the group’s West River Parkway plans. Newman said funding for the project is secured and construction will likely begin next year. 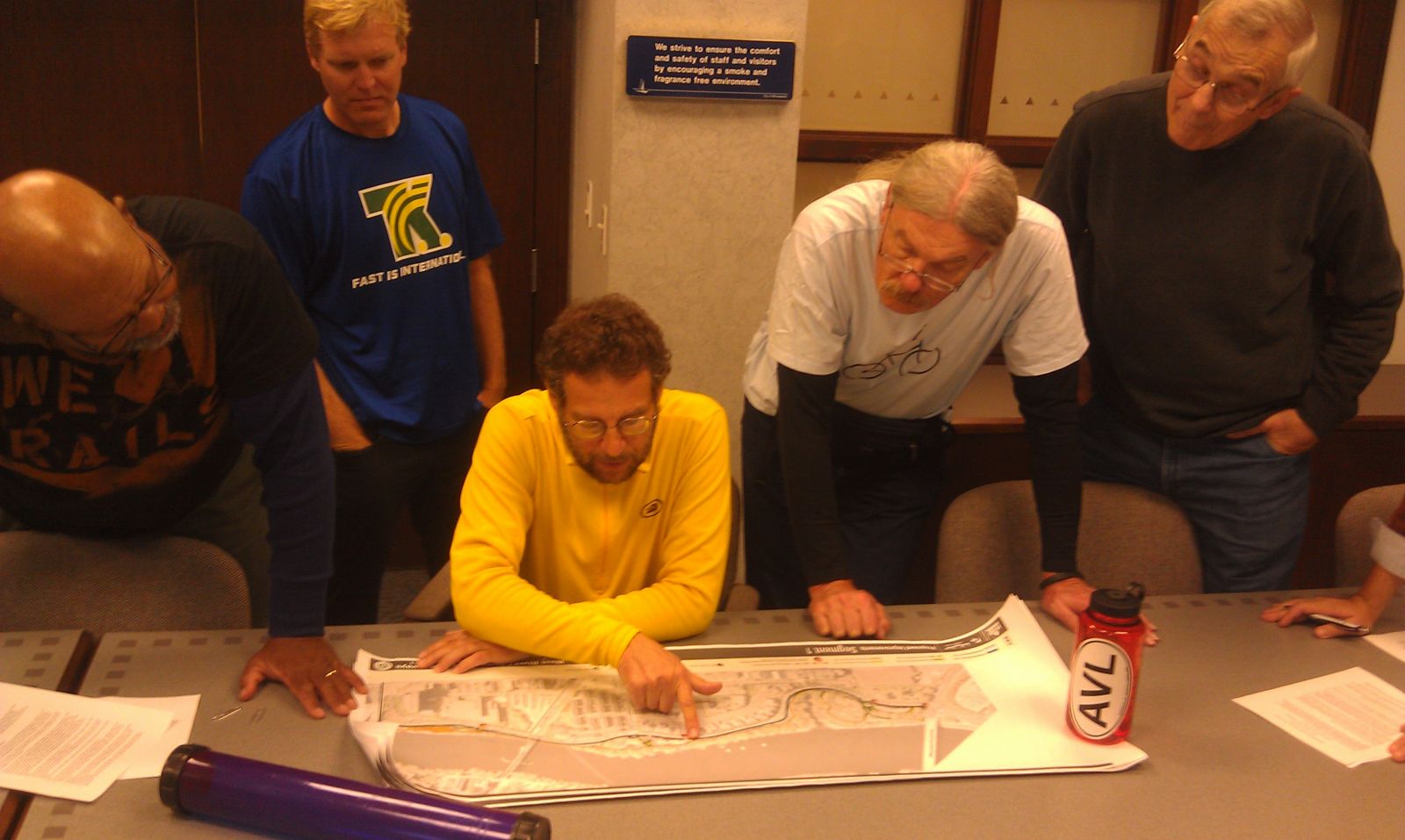 The good news is that the bike and pedestrian paths will be completely repaved with asphalt from Plymouth south to Franklin improving a trail that is significantly deteriorated in several spots and not a pleasant bike surface. Plans also calls for straightening out kinks in the trail, most notably the sharp turn weaving around the abutment for the 10th Ave Bridge.

Another significant improvement will be reducing entrances to parking lots from two down to one, which reduces conflict points with vehicles. In a busy area like the entrance to the Stone Arch Bridge this should make the trail much safer and easier to navigate. At the Stone Arch, plans close the parking lot entrance closer to the bridge, which has been a dangerous area for bicyclists.

Bicyclists will also be happy to hear that planners are leaning toward paving the infamously bumpy plank road near the Stone Arch Bridge. The pedestrian path would likely remain a plank road to preserve the nostalgic appeal of this boardwalk like section of the parkway. 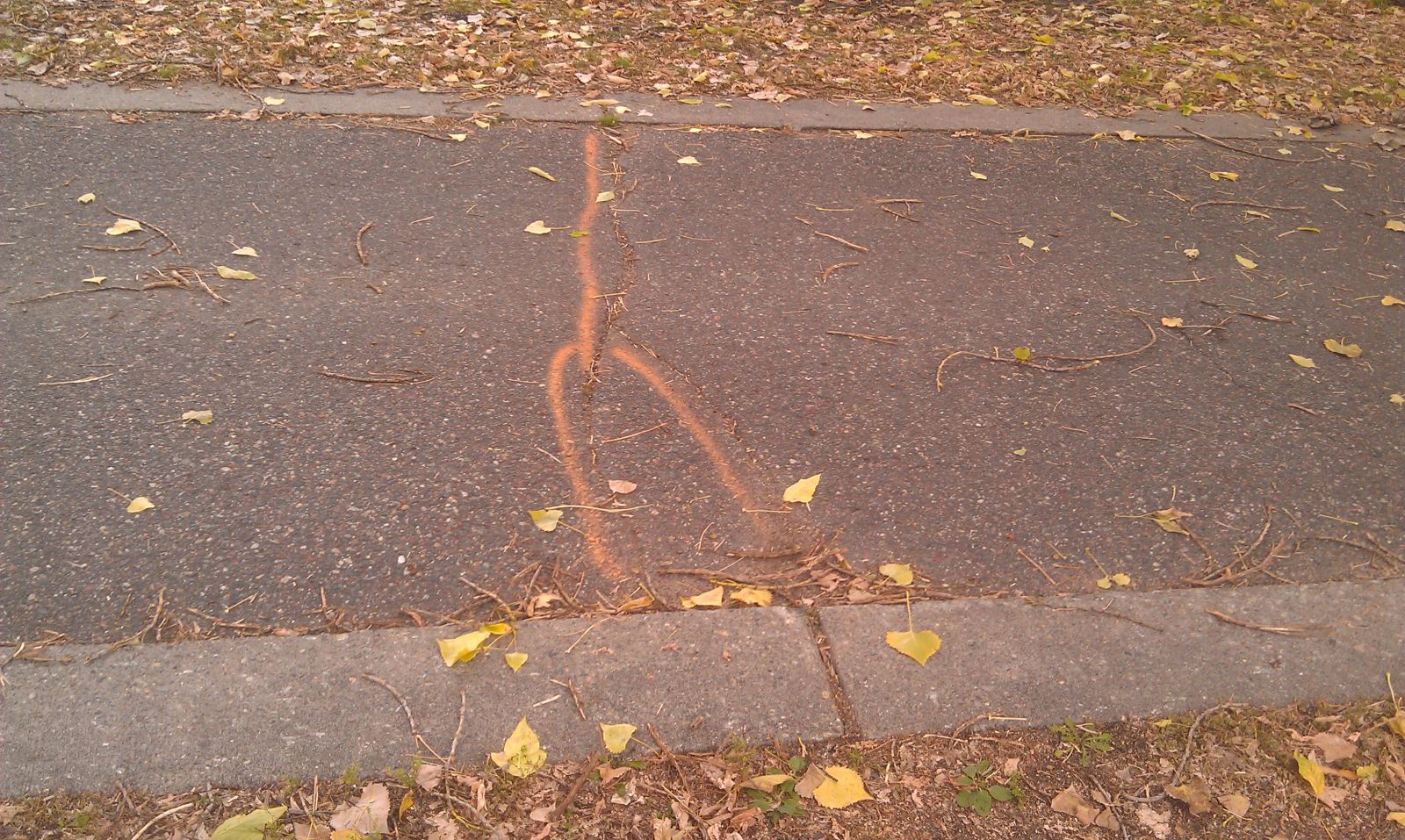 The cracks in this section of the West River Parkway bike path are marked in orange, hinting at improvements to come to the trail condition.

The BAC largely expressed their approval of the West River Parkway plans as it seemed great pains had been taken to improve the bicycle experience on the trail. The committee did offer a few suggestions for further improvements.

Speed tables, although seldom used in the Twin Cities, are becoming more popular in other bike friendly cities and function like a speed bump only widened to allow a bicycle trail to cross along its length. A speed table serves the joint purpose of making motorists more aware of bicycle and pedestrian traffic through the visibility the raised path has, encouraging motorists to reduce their speed for the grade chance, and making the grade smoother for bicyclists and pedestrians path. Rather than dipping down into the road and back up again when crossing a road, bicyclists stay at grade over the speed table. Thus, the ride is both safer and more comfortable.

BAC member Paul Frenz updated members on the Southwest LRT plans. He presented a bike trail relocation map that would bypass the southernmost section of the Kenilworth trail while that section is under construction.

Frenz said he wasn’t able to ascertain whether the plan is being considered only as a construction detour or also as a long term engineering solution to the problem of the bottleneck near West Lake Street.

During discussion, members agreed that the route could be an adequate detour during construction but would be problematic as a permanent reroute because there would be too many intersections crossings making it slow, dangerous and less attractive to casual bicyclists.

Although they were skeptical of relocation of the bike trail, the committee decided to wait to issue a statement on the route until Met Council's plans became clearer.

Varsity Bike Shop owner Rob Dehoff attended the meeting and raised the issue of access to Dinkytown for the newly opened Dinkytown Greenway.

Apparently, Mayor Rybak included $275,000 in his budget to construct a staircase with bike sliders from the Dinkytown Greenway up to the corner of 4th Street and 15th Avenue Southeast. Currently, the trail’s connects at East River Road and at 5th Street and 17th Avenue SE but not in between (in the heart of Dinkytown).

Dehoff said a ramp would be the preferable option for bicyclists. Committee members agreed but passed along the city’s explanation that a ramp would be difficult to engineer in the limited space available next to the trail.

Dehoff also asked if a bike trail connection from the Dinkytown Greenway to the Stone Arch Bridge is in the works. Members informed him it is, but probably a few years off due to complications acquiring the necessary property from the railroad authority.