At its May 3 meeting, the City of Minneapolis Pedestrian Advisory Committee discussed three new projects as well as updates on new crosswalk markings recruitment for new PAC members and other issues. No formal action was taken. 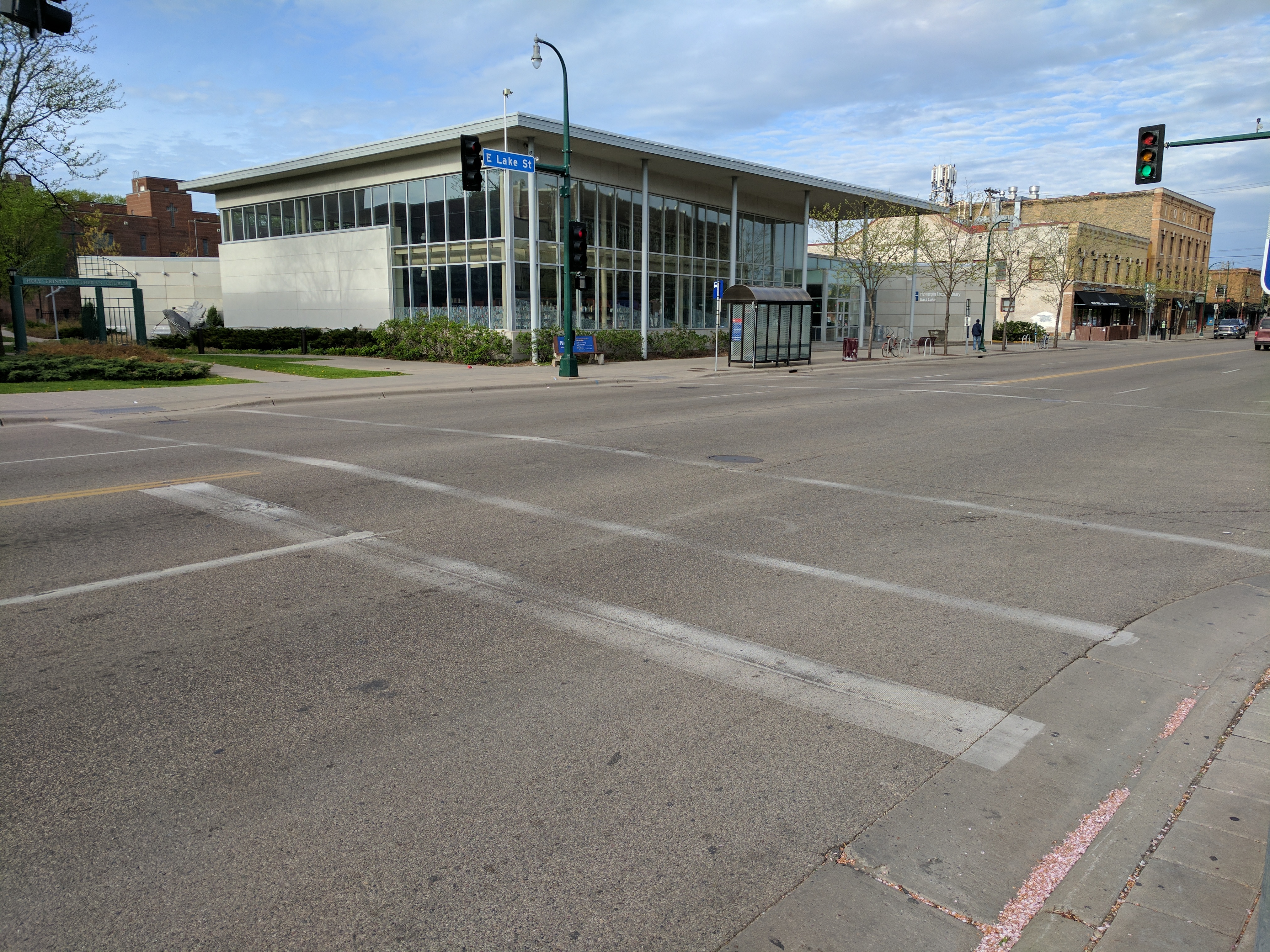 A standard “parallel lines” crosswalk at the corner of East Lake Street and 28th Avenue South. 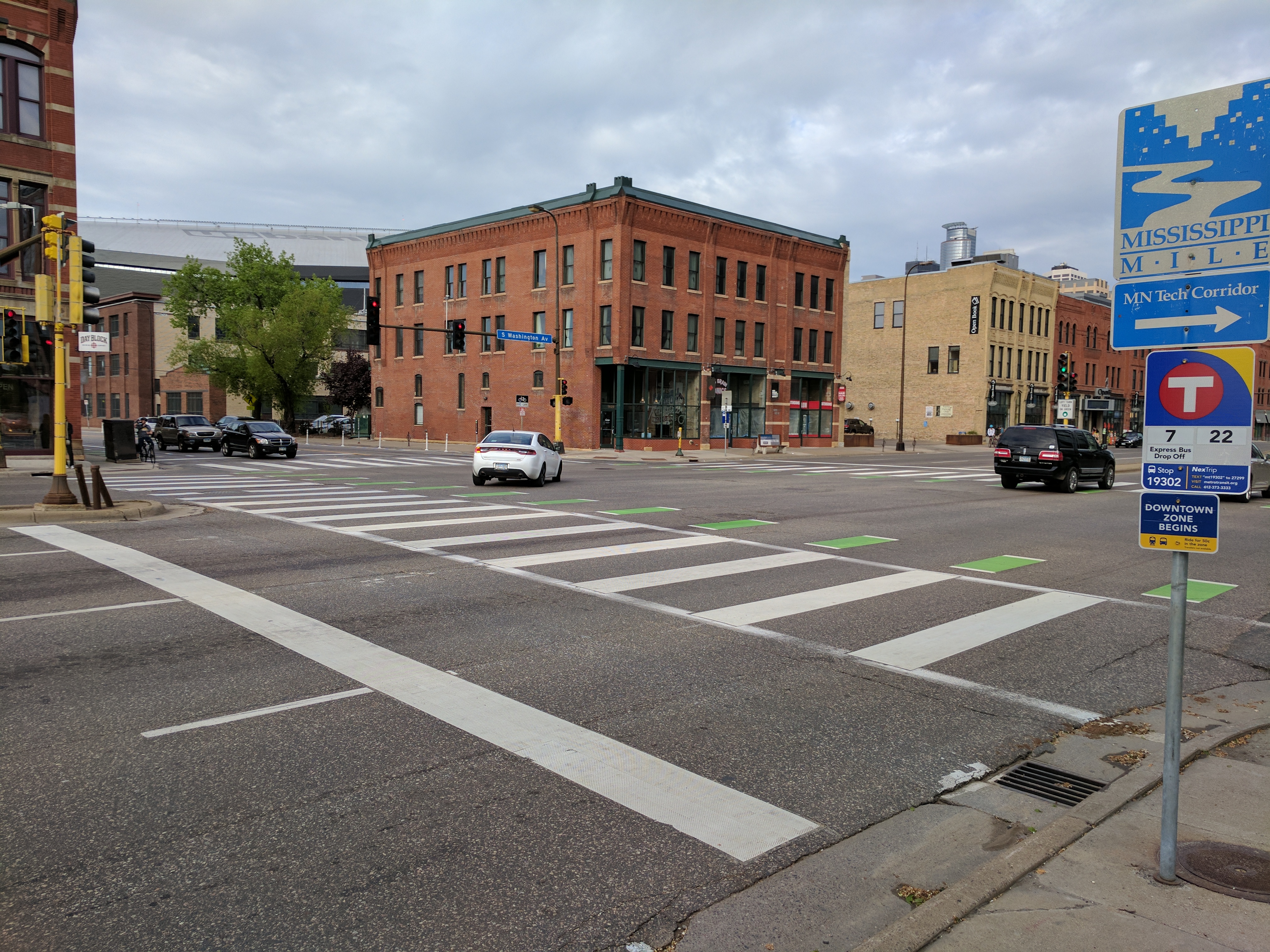 A zebra crosswalk at the corner of South Washington Avenue and 11th Avenue South.

The City of Minneapolis plans to replace nearly all of its “parallel lines” crosswalk markings with the higher-visibility zebra crosswalks by the end of the year, according to Traffic Operations Engineer Steve Mosing.

“With some new equipment and some ingenuity by our staff, we think we can pull it off,” Mosing said.

Minneapolis currently has more than 3,800 marked crosswalks. Zebra crossings were originally installed only at schools and mid-block crosswalks. Mosing told PAC members that new equipment purchased by the city will allow maintenance crews to work more efficiently and upgrade all crosswalks to zebra markings with minimal added cost.

Because of damage from weather conditions and normal wear-and-tear, Minneapolis has to replace its crosswalk markings nearly every year. While most of the new zebra crosswalks will painted on, Mosing said that approximately 300 crosswalks per year will now be upgraded to “durable” markings made from materials that can last anywhere from five to 10 years.

Mosing added that the “stop bar” — the gap between the crosswalk markings and the line that indicates to drivers where to stop their vehicles ahead of the crosswalk — will be increased in some places from 5 feet to 10 feet.

Improving the visibility of crosswalks is one of the strategies identified in the city’s Pedestrian Master Plan.

Bob Loken, co-chair of the PAC’s Infrastructure and Engineering Subcommittee, reported updates on the following projects that were discussed at the subcommittee’s April 20 meeting: 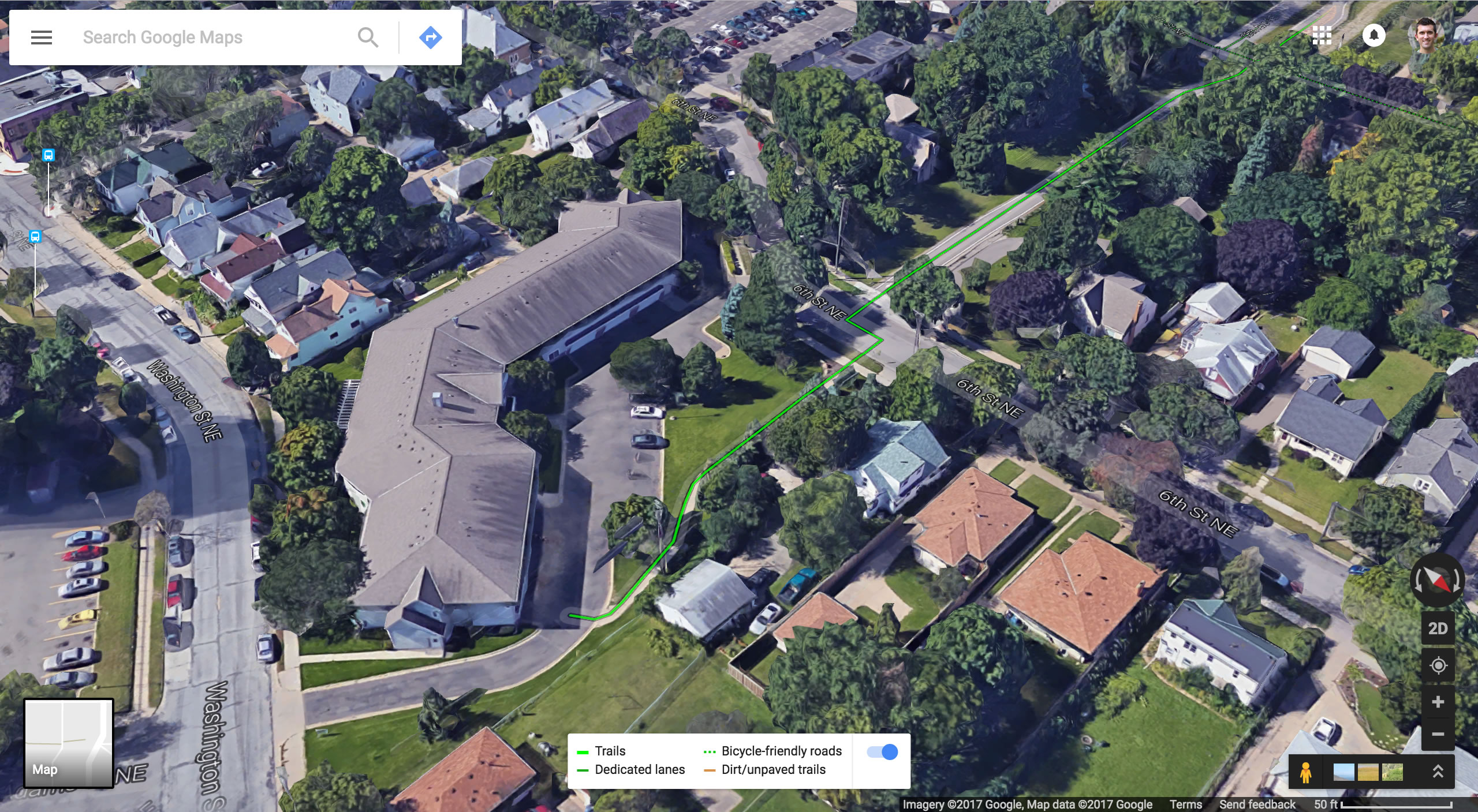 The 18th Avenue bike trail ends abruptly at a condominium for senior citizens.

The city is seeking to negotiate an agreement to extend the 18th Avenue Northeast bike trail across a piece of private property (view in Google Maps or Google Earth). The “surgical one-block connection” would eliminate a barrier to the proposed Great Northern Greenway that would stretch from Theodore Wirth Park in North Minneapolis to the Quarry in Northeast Minneapolis.

At the time the trail was originally built, the city was unable to persuade the owners of the property — a condominium for senior citizens — to support extending the trail across their land. The property is now under new ownership that may be more open to the idea. The city plans to negotiate for a permanent easement that would allow for a multi-use trail across the property.

The five-point intersection at the eastern end of the proposed bike trail connection could pose some design challenges. Loken said the project would come back to the PAC for review after further design work is completed. 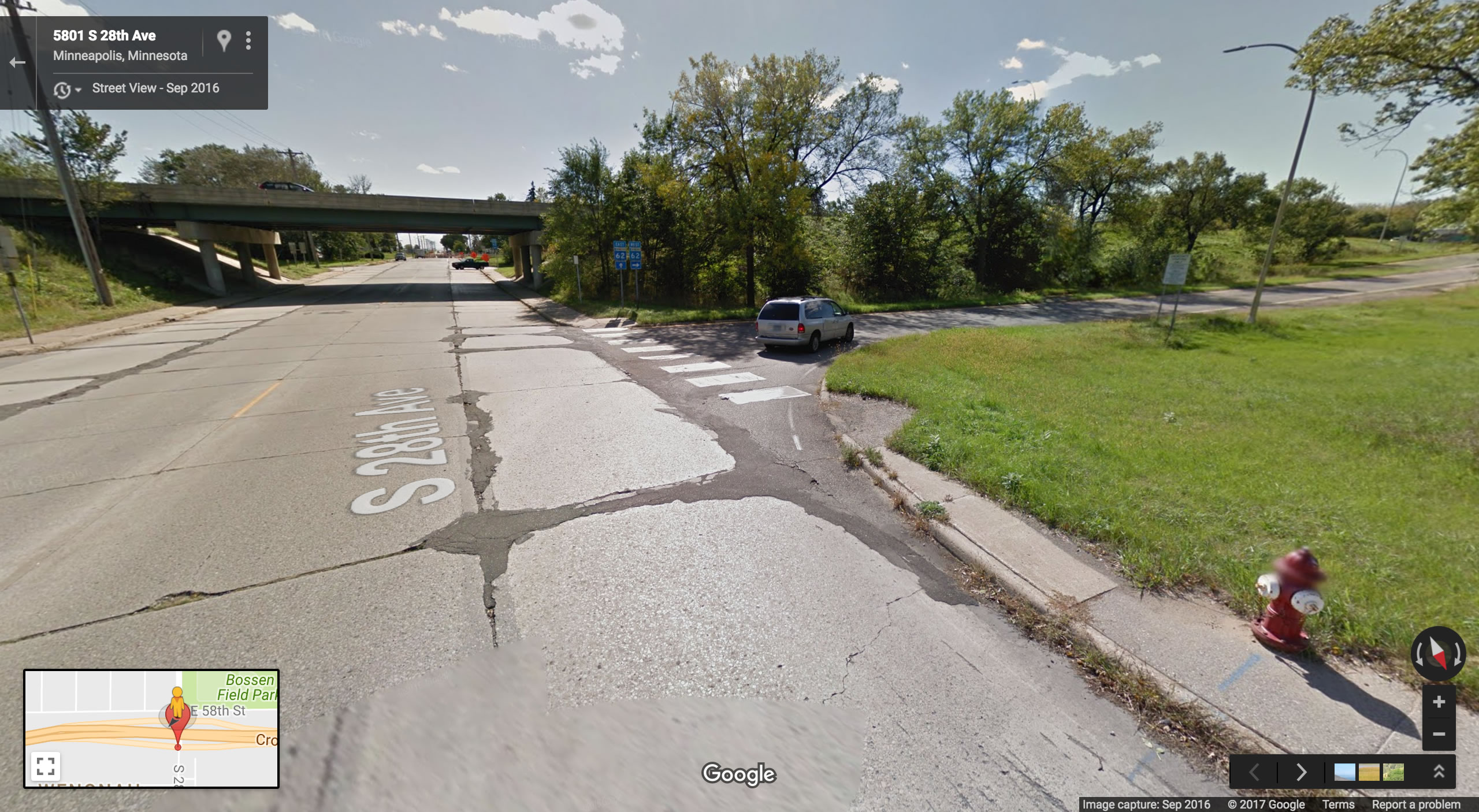 This project will reconstruct a one-block road segment (view in Google Maps or Google Earth) that connects a small, isolated neighborhood near Minneapolis-St. Paul International Airport with the rest of South Minneapolis. The roadway in question is the stretch of 28th Avenue South between 58th Street East and 59th Street East.

The PAC’s stated goals for this project include reducing the width of the roadway, creating boulevards with trees, tightening the rub radii at the highway entrances and exits, and installing pedestrian-scale lighting under the overpass.

Because it is a low pedestrian traffic area, Loken said there is not much emphasis on widening sidewalks; however, he said tightening the curb radii and adding lighting under the Highway 62 overpass would help “pedestrianize” the intersection.

Loken noted that one other goal for the project is to ensure that the final design does not preclude the possibility of future bike lanes or other bike facilities. He said the route is one of several possibilities for an eventual bike route to the airport — something that is likely many years away from being realized.

Loken said the PAC will have another opportunity to review the project as the design phase progresses. 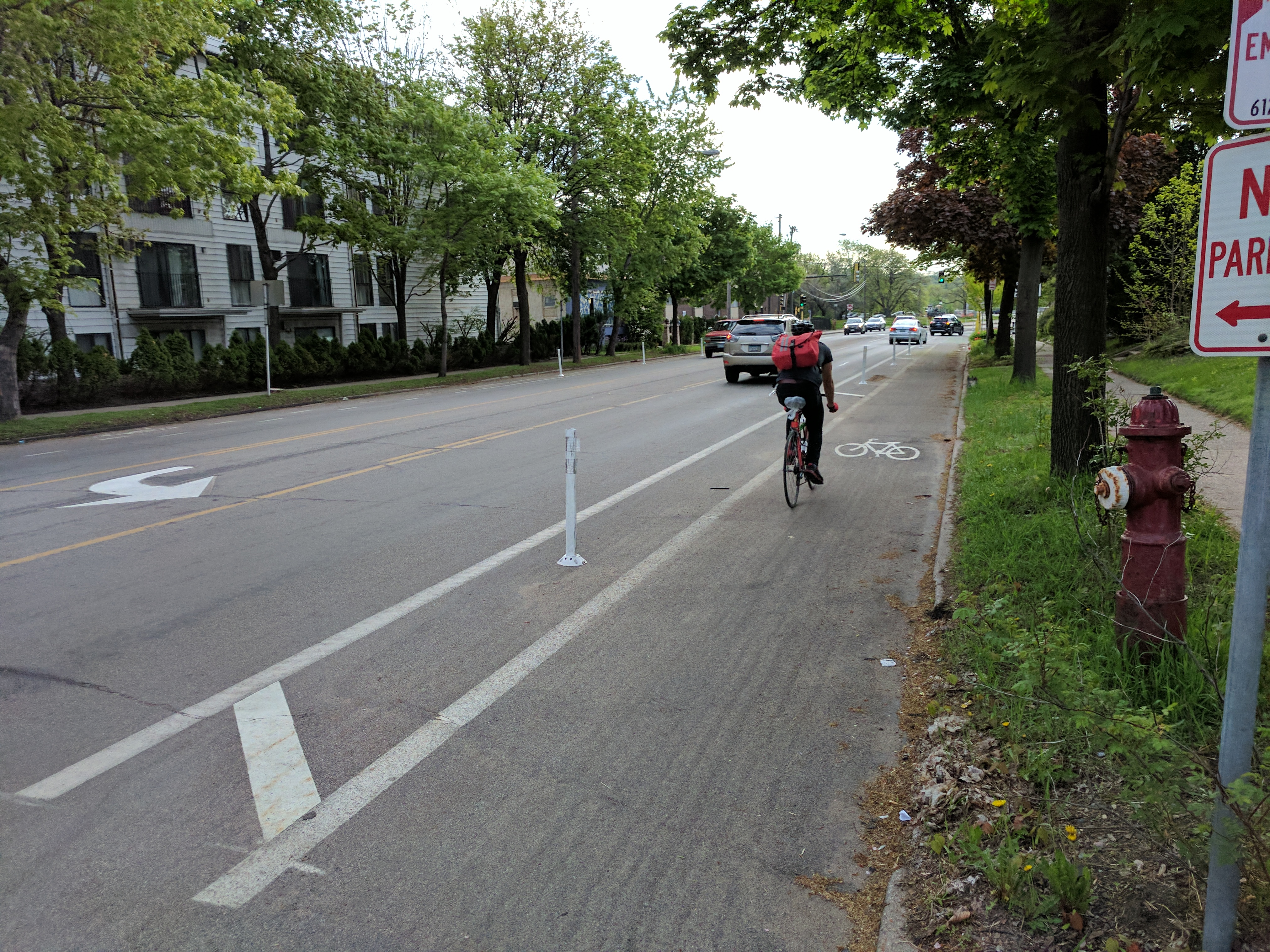 The city is proposing to install 2.6 miles of protected bikeways that would connect the University of Minnesota with several of the surrounding neighborhoods. It is primarily a signing and striping project, with a small budget for altering curbs.

Because it’s primarily a bike project, Loken said it will likely not come before the PAC again. 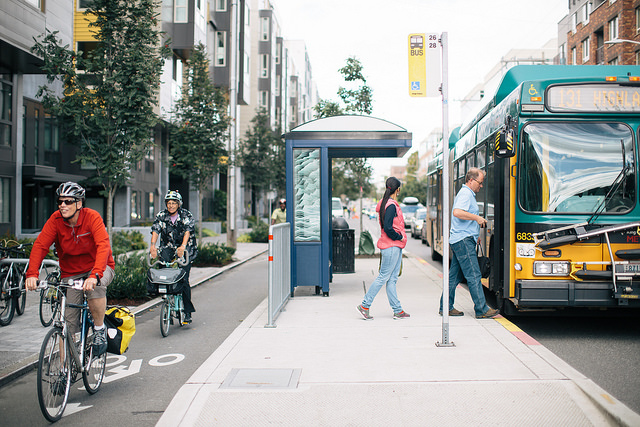 City Bicycle and Pedestrian Coordinator Matthew Dyrdahl led a discussion around the accessibility issues posed by protected bikeways for pedestrians, transit users and persons with disabilities. He presented examples from various U.S. cities of innovative treatments where bikeways meet crosswalks, parking areas, transit stops and commercial loading/unloading zones. “We have a lot of work to do” to figure out accessibility issues around protected bikeways, Dyrdahl said.

The PAC is seeking new members and is doing outreach through target partners to recruit potential candidates for PAC membership. An article written by Julia Curran has also been cross-posted on the Minneapolis Bicycle Coalition website and Streets.mn to encourage people to apply.

The PAC comprises 15 voting members appointed by the Minneapolis City Council as well as non-voting members from various public agencies. Members serve two-year appointments and are asked to commit to between two to five hours per month of PAC-related meetings and activities.