The suggestion of making the bike paths around Lake Harriet and Bde Maka Ska (Lake Calhoun) two-ways was quickly shot down by a community advisory committee this week. The hyperbolic narrative and complete lack of recognition of automobile domination is troubling, especially in discussions around a park. 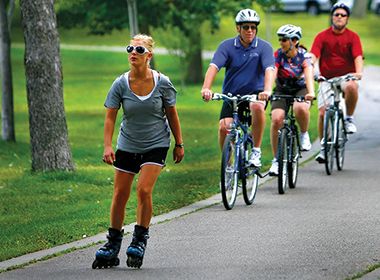 If we really want to improve the ecology, recreation, and safety of Harriet/Bde Maka Ska, we really should be looking at making the parkways one-way for cars and putting the other bike direction and green space in the freed up car space.

But the reality is that most of these comments come from people for whom regular bicycling, much less bicycle commuting, is foreign, but driving is totally normal. As one of our volunteers and Harriet-Calhoun Community Advisory Committee member, Ben, noted in an August blog about the possibilities of this project:

"Will any of this [forward-looking improvements including for biking and walking] happen?

I don’t know. For one thing, many of the same struggles related to parking, density, and anxiety about cultural change that we routinely see in other planning processes will play out here."

We've social engineered an environment where the automobile is normal and assumed to be a essential while a desire to bike, especially to go somewhere, is other or weird. This is true even in the most heavily biked areas--like the west side of Bde Maka Ska where more than 1,500 people bike everyday (only half as many as who are driving northbound). We are making strides to change that mindset, but we have a long way to go and we need many more people to bicycle--or know someone who does regularly--to change that. Until we do, nature lovers will periodically bemoan bikeways while ignoring the bulldozer next door. Let's all keep inspiring new bicyclists and opening more minds.

Pictures from Minneapolis Park Board