Do not fret, for even when the meeting location falls through for the Engineering Subcommittee, they will improvise and downsize to standing room only for a space to review and advise on street designs to be safe for all users. A handful of existing projects, for both 2017 and beyond, came before the Subcommittee, take a look and share your input. Help us ensure that the safety and efficiency for pedestrian and bike commuters is given due consideration.

Several government agencies (MnDOT, Hennepin County, and City of Minneapolis) are working on adding a protected bikeway, between Central Ave and Oak St, to this area in 2018. 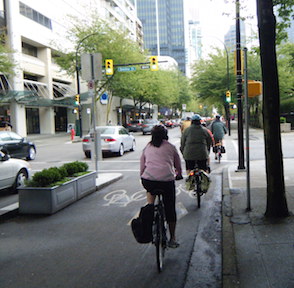 We’re beginning to get a sense of how many it takes to screw in the light bulb. The project is in an evaluation phase to determine the best fit design. The system could be a two-way protected bikeway along University (on the south side) or could be a one-way bikeway on both University and 4th in the direction of traffic. Take a look at the project website for more information, there are also some nice pictures of bikeway options in the Project Fact Sheet. If you have comments on this project, please share them with the project planners or share them below in our comments section. (Picture: Cycletrack in Vancouver)

Another 2018 project here, but also an important one. Lying between Lake St and 36th St, the corridor is a staunch mix between high-density retail and a residential area. It was unclear to the Subcommittee whether this project needed to include a bikeway or not. There are several bike routes surrounding the area (Bde Maka Ska Trail, The Midtown Greenway, 36th Street, Bryant Avenue) so a new bikeway here could serve as a useful connector. Though, there is not enough space for a bikeway without removing parking (used at an avg. 50-75% efficiency) and the corridor could benefit from an expanded pedestrian space and shorter crossings, especially between Lake and 31st. There are also three bus routes that travel along this stretch of Hennepin, one of which is high frequency (Route 6). So in sum, it’s a tight space and perhaps pedestrian advancements should come at the cost of space for cars and bikes. Are side streets suitable to bike along? Want improvements here would be useful for you? There is an Open House for this project on January 25, 2017 from 6-8pm at the Bryant Square Park Recreation Center (3101 Bryant Avenue). Please attend or share your feedback here if you have thoughts on how walking and biking would be made safer in this area. Take a look at the project website for more info. The feedback from the surrounding community and those who use the space will be important in settling in on a design.

Beside Protected Intersections, Floating Bus Stops are my favorite bikeway design. They are being considered for the reconstruction of Hennepin through downtown, and one is also being considered here. Currently, this bus stop, on the southwest corner, is a poor mix of bike users on the two-way bikeway on Oak St and the transit users of the three routes that end here. The stop also poorly serves transit users with disabilities. 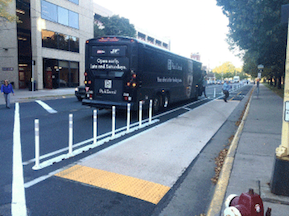 So being due for a much needed upgrade, there should be a preferred design in the next month or so. I hope to delve into more details about important design considerations after it is presented. Check out section 5.4 of this chapter from the MassDOT Bikeway Design Guide for potential bus stop configurations. This video shows a floating bus stop in action. This project should be complete by the end of this year. (Picture: The bus stop as seen today)

Oh what fun it is to develop master plans! A Draft Master Plan for this part chain of lakes system is now available for public review and comment. You can choose to pour through this lengthy document however you may wish but I’m sure you’ll especially want to look at Chapter 4: Access and Circulation. The public comment period is open till March 4th, so be sure to fill out the survey before then. The BAC has expressed that they would like to see a two-way bikeway system around both lakes (better for commuting) in the past but they have not yet given feedback on the draft plan as they need time to review. Please be sure to share feedback on the bikeway or pedestrian system that you may have. Do you want to write a longer post about one of the chapters? Let me know below.

The bikeway and pedestrian realms here are in for a serious upgrade. The project extends along Fremont and Emerson from Plymouth Ave to 33rd Ave N, it then continues along Fremont till Webber Pkwy. I couldn’t find a project website and there is no semblance of layout yet but here are some of the things the layout will be sure to include: curb extensions, ADA-compliant pedestrian ramps, and new crosswalk striping at 16 corners; some of those will have pedestrian medians and audible crossing timers; expect to see a protected bikeway on both Emerson and Fremont south of 33rd N; finally, 20 trees will be planted (Yea street trees!). With several parks and schools in the area, these safety improvements could serve the community very well. Expect to see a layout and further discussion in the next month or so. The planners are hoping for layout approval by March.

As promised by Mayor Hodges while debuting the 3rd Avenue S bollard protected bikeway, the system is expanding north to University Avenue. By only shrinking the car lanes to well-accepted widths and adding a small buffer with bollards, we have ourselves a protected bikeway. When asked why the project could not be extended to 5th Street SE, the project planner said the design considerations become messy. This extension will be of great use when the University/4th system is implemented. The design treatment along the bridge could be only temporary as the bridge is currently being assessed by MnDOT for repairs. Did you know the bridge is over 100 years old!? If the bridge is redecked, we could possibly see a similar treatment to the Franklin Bridge.

That’s it for this month. Thank you for taking the time to consider these projects. Please leave your questions, suggestions, and concerns in the comment section. Check back next month for updates on these projects as well as introductions to new ones.

The Subcommittee meetings are open to the public, and occur every third Tuesday of the month, 4:00-6:00 p.m. at the Colonial Warehouse Building, 212 3rd Ave N, Suite 404. If you will be attending a future meeting, have questions or you are interested in being included on the email list for the subcommittee, which includes updates on meeting times and agendas, contact Kurt Wayne, the committee staff member.