The city and county are holding a community meeting to share plans that involve restriping Park and Portland Avenues to calm traffic and create a safer environment for bicyclists and pedestrians. It's Thursday, Aug. 30, from 6:30 – 9 p.m. (presentation 7:15 p.m.) at The Center for Changing Lives (Lutheran Social Services), 2400 Park Ave. S., Conference Room 104.

This is an essential opportunity to make these high-speed streets much friendlier and safer for bicycling in addition to a whole host of other community benefits. We hope you will attend. It's imperative that there is a strong presence from bicycling supporters. You can see a handout with the county and city proposal here. The proposal is a significant step in the right direction. The latest information from the County on the project is available here.

The key messages we encourage attendees to share include (full background and details are below for each of these points):

Hennepin County is repaving these streets between Interstate 94 and 46th Street South in late September. The repaving provides an opportunity to do some basic changes to the design of the street.

The streets are currently each one ways with three lanes for cars, a left-sided bike lane, and parking on both sides. The speed limit is 35 mph, but the lights are timed for faster than that and traffic routinely exceeds 40 mph. Originally made wide one-ways before 35W was built, they carry no more than 13,500 cars a day at any point and often much less--amounts that mean that the streets are normally quite empty of cars, which adds to the speeding problems. 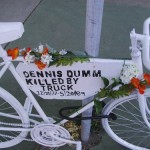 There are more than 600 bicyclists a day on each road north of the Midtown Greenway making them one of the busiest bike routes in the city. Yet, they are very uncomfortable streets for the vast majority of bicyclists and they have some high-crash locations, especially at intersections where there are a lot of left-turning cars. There are no other north-south bike routes for 9 blocks to the west (Blaisdell/1st Ave combo) and 13 blocks to the east (17th Ave Bicycle Blvd coming next year. Dennis Dumm was tragically struck and killed while biking by a left-turning semi truck at Park and 14th Street.

There are up to about 1000 pedestrians a day on each road, likely with more in the downtown areas. There are common complaints of it being hard for pedestrians to cross these streets. Louise Laugen was hit and killed while crossing Park Avenue at 27th Street last winter. Her death and the long history of concerns led to the installation of a new stop light there.

Local residents have long complained about these streets and there is little doubt that the freeway feel negatively impacts property values. The city has had some discussions about whether to convert them to two-way streets. The Access Minneapolis Transportation plan adopted in 2008 includes a plan to study a potential conversion to two-way streets north of Franklin Avenue. That study has not yet happened, and such a conversion is outside the scope of this year's project.

You can find more about the history of these road in this excellent Twin Cities Daily Planet article. 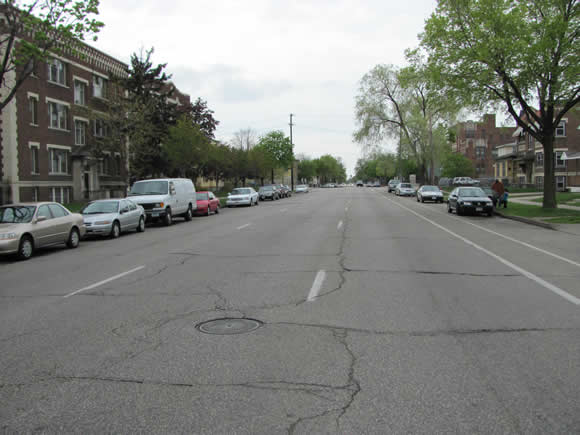 Can this urban freeway be transformed? It definitely can with your help August 30!

The city and county are proposing removing an auto lane in most areas south of downtown on both roads. We want them to convert it for the entire stretch, including downtown. This may mean that there is a little more traffic congestion in a few areas during the afternoon rush hour, but that slight disruption would be more than offset by improvements in quality of life of nearby residents and the improved pedestrian and bicycling environment. Some drivers would find other routes or go at slightly different times of day and some people would now be comfortable biking instead of driving and make the switch. And downtown needs a change here. These roads are surrounded by a lot of surface parking lots that should be more. These roads are ghost towns downtown at all times of day but rush hour--why not use that space (see #3 below for more info) for something more?

2. I support making Park and Portland much better for biking by providing a buffer between the car lanes and the bike lane.

The county and city will be proposing this in most areas. (We will continue to push for parking-protected bike lanes and would encourage others to as well.) A note that the Midtown Greenway Coalition, Hope Community, and the City of Minneapolis Bicycle Advisory Committee are among the groups that have endorsed having a protected bike lane added to replace a lane of traffic on Park and Portland. A couple writers at streets.mn see the great idea as well.

3. I think the city and county should--in the future--add significant new green space and provide a curb-protected bike lane (or cycle track) to maximize the value of the space gained by removing a car lane.

Park and Portland should be signature community assets not freeways. Imagine the possible uses for 11 feet of space (assuming taking a lane of traffic). You could add greenspace and a cycle track to create a green spine that connects from Minnehaha Creek to the Mississippi River and Stone Arch Bridge with Midtown Greenway, Swedish Institute, new Vikings Stadium, and Guthrie Theater right along the way! Or you could add parking spaces by having diagonal parking on one or both sides. You could add rain gardens to treat millions of gallons of stormwater saving pollution and money. You could provide space for community gardens or community art. And these visions are possible because Park and Portland are such wide streets--among the widest in the city.

Curb work is not part of this project, but a number of potential pots of funding--from stormwater management to capital improvement funds--might be feasible for these valuable improvements. It won't happen this year (or, likely, in the next few years), but this meeting provides an opportunity to get people thinking about what could be if we do #1 and #2 now. 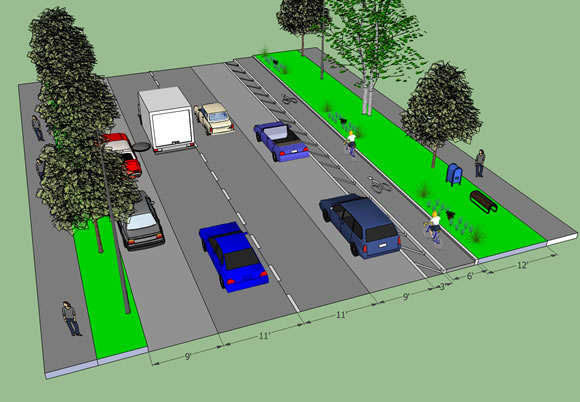 One potential way to add a cycle track and new green space in the future. Thanks to Brendon Slotterback (http://netdensity.net/) 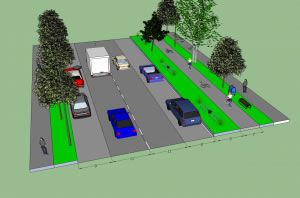 A second potential way... Thanks to Brendon Slotterback (http://netdensity.net/)

The Downtown Council recently adopted its Downtown 2025 Plan, which includes initiatives to "create a consistently compelling downtown experience" and "create and sustain a green infrastructure and showcase the riverfront." The plan wants to create "green corridors" to improve the downtown experience, spur development, connect neighborhoods, and help people discover and explore the river more.

Meanwhile, the RiverFirst Initiative (a partnership between the Minneapolis Parks Foundation, the Minneapolis Park and Recreation Board, and the City of Minneapolis) also thinks that Minneapolis should “restore its identity as a city of the mighty Mississippi and leverage one of three great rivers of the world as a source for economic development and community and cultural vitality.”

Adding 10 feet of greenspace along 4 miles of each Park and Portland would mean more than 9 acres of new green!

Park and Portland Avenues include over 1.3 million square feet of pavement (22 football fields of asphalt). When it rains, stormwater carries all the salt, sand, trash, oil, antifreeze, etc. down the storm drains towards Powderhorn Lake, Minnehaha Creek, and the Mississippi River. In an average year, Park and Portland shed over 20 million gallons of polluted runoff. Yet, roadways are exempt form city stormwater fees. Currently, property owners pay to manage and treat the polluted stormwater that flows from these roads. Added greenspace could be used to help collect and treat much of that stormwater--saving money and pollution.

Many studies have found that Americans are willing to pay a premium to live in areas that are more walkable, have greenspace, and have access to bicycling facilities. For example, in Minneapolis, home values have been found to increase by $510 for every 400 meters closer they are to the Midtown Greenway. Who wouldn't rather live near 10 feet of greenspace rather than 10 feet of asphalt?

Many new cycletracks have been show to reduce speeding, which makes the road safer, quieter, and a better neighbor for residents and businesses. In a Washington, D.C. example, 66% of motorists exceeded the speed limit before a cycletrack was installed and only 26% after. In a New York City example, 75% of motorists exceeded speed limit before and only 20% after (source).

We could go on and on with the potential benefits of this next step vision (we didn't even get into biking benefits!). We hope you find it exciting as well, and will bring it up at the meeting August 30.

What are your thoughts on Park and Portland? Are you going to the meeting (and telling your friends)? Do you have any questions about any details?