How a Ghost Bike Shifted My Gears

I think death can take us in one of two directions; radical openness or insane closed-off-ed-ness. It's the only explanation I have for my response to the ghost bike I came across on Labor Day—one of those white bikes put up when a bicyclist is killed by a car.

I saw it on the corner on 28th and Pleasant and was struck by how forlorn it looked, (pictured at left.)

I stopped and got a closer look at the bike marking Jessica Hanson's life. I didn't know Jessica [a 24-year old], but I was familiar with the news story. It was a hit and run, but the driver was caught a week later. So for the public this case was closed, but for me, two months after a young woman died felt too soon for a memorial to look so forgotten.

I wondered, who takes care of these bikes—and couldn't I tend to it?

These things probably play out like this: A loosely organized group puts up the bike. Loved ones leave notes and mementos. And then after eye sore complaints or it's hit by a snow plow - the city cuts the lock and removes the bike.

There is no need for the family to return here. They have said their peace and live far away.

I wondered what the city's role is with memorials. While they are good outlets for grief, there must be a time limit. I couldn't find a city policy, but blogger Johnny Northside says it is a loosely enforced two weeks.

My hope was to deter that 311 call and ideally draw the city's attention to this intersection. Maybe the city would redesign it. As it is, 28th street was built as a temporary one-way, designed to move traffic while interstates 94 and 35 were built in the 1960's, but it was never turned back to its original form.

In that respect ghost bikes are bigger than a memorial. One-ways tend to encourage speed and the bike tells cars whizzing by, "hey slow down here." This street is particularly dangerous: In the city's 10-year study on bike-car crashes, 28th is literally off the charts.

But something about this forgotten bike inspired a type of openness that I don't normally have. There I was on Facebook, asking others for help. And people shared the post, and then this: five strangers showed up on 24 hours notice. (Out of respect I asked Jessica's mom, a state patrol officer from Hoffman, Minnesota, who granted me permission.)

Living with a forgotten ghost bike on the boulevard of your house must be a slow drag on your psyche. Lori didn't want this tragedy, and suddenly the bike was in front of her house, a daily reminder of a heartbreak two months earlier. She came out when she saw us working.

She told me about having to mow around "what feels like a gravesite," and she asked a lot of questions, too. "Why are you doing this? Did you know her? Where's her boyfriend? How long will this be here? Shouldn't you be focusing on the positives—her organs that were donated?"


Allow yourself to be surprised

I told her we were tending to it to honor a life, and to be a visual reminder for drivers who speed past. The bike tells them someone died here and to 'start seeing bikes - slow down.' It could draw the city's attention and put pressure to redesign the intersection."

Here's where things changed. "The problem isn't the street design, it's driver behavior, mainly the Somalians who shop at the mall," Lori said, pointing to the stores down the street. "They never stop at the end of Pleasant." I suggested the driving habits had less to do with ethnicity and more to do with being new drivers, or trying to see around the parked cars on 28th, or not growing up with cars like we did.

We went back and forth on this topic for a while (calmly, somehow), and it felt like we were representing the classic democrat and republican perspectives: Mine being "let's change the form" (the intersection) and Lori's of "the form works fine, it's the behavior that needs changing." In reality both are right. Fatal bike-car crashes are generally caused by more than one contributing factor, I've heard Nick Mason say. (Nick's from the Bicycle Alliance of Minnesota, and he reviews the police reports after fatal bike accidents.)

"Watch this car," she persisted, as an East African driver approached the corner. We all did. And the car stopped for a full 3 seconds before proceeding through the intersection.

"Well okay not that one," Lori remarked." Allow yourself to be surprised," I said.

Lori was quiet. Her cat watched it all from the window. "He looks like the famous internet cat Henri," I said, trying to lighten things. (Her cat was not Henri, Lori told me.)


More than a band aid

After an hour, we'd made a significant difference in the bike's appearance. But the improvements would be temporary unless we established a process (I didn't live nearby). So we posted signs asking for one month commitments to tend to the site, in whatever way that person wants to define it. 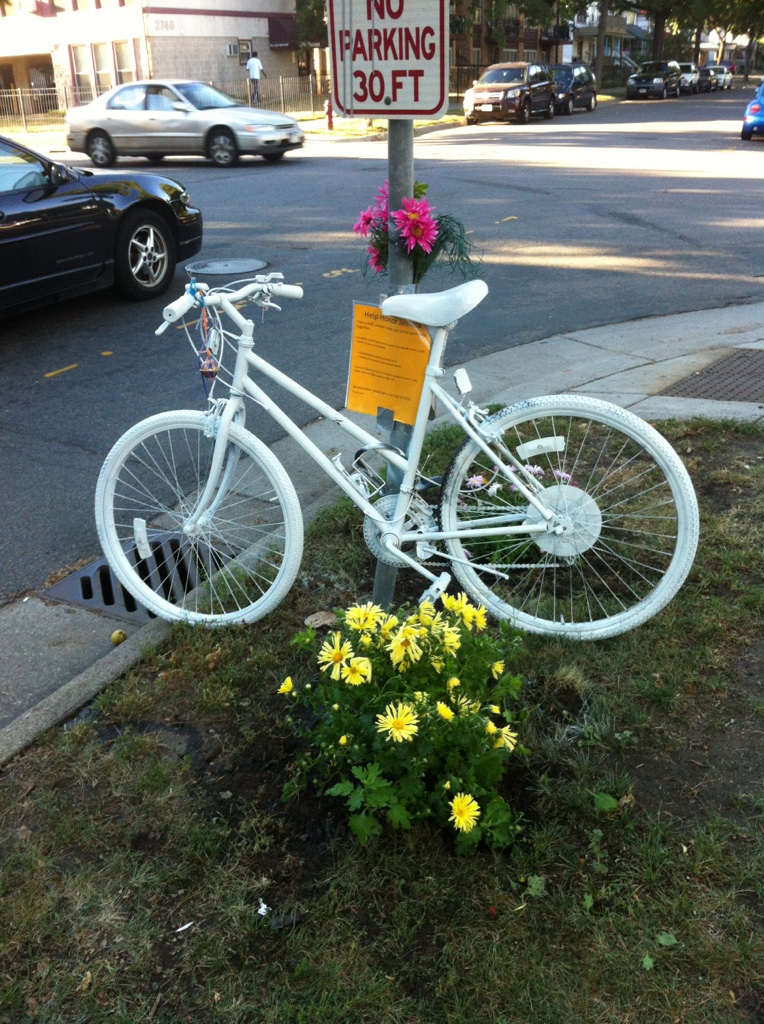 Lori came out of the house again. Something had shifted for her, too. I know this because she started talking about how it wouldn't be too hard for her husband to keep mowing around it. She pitched in, too; discarding the old flower pots. She was no longer talking of taking it down but of finding a way to live with it. Even all these months later, that bike is still there, and the grass is still being trimmed around it. There's been no 311 call yet.

But no one responded to the signs for two weeks, and the experience began to feel like nothing more than an exercise. Then two people saw the signs and offered to help. ("Allow yourself to be surprised," I told myself.)

If I learned anything from this experience it's that my taking the risk of being open can have a cascading effect on others. Openness can change the way people view things (bikes, drivers, streets.) In this case it resulted in a group of people taking a bike from looking a gravestone to caring for it and turning it into a positive force. And maybe the city will take notice and see that the street is not set up right. For the next year (through the accident anniversary of July 6, 2014), I'm going to try and keep this going. If you'd like to help, sign up.