On March 25, the City hosted the first of three public open houses about a $9.1 million project to fully reconstruct some parts of the Hennepin-Lyndale commons area in front of the Walker Arts Center. (Picture at left shows comments from last night; image from Matt Brillhart.) The open house included significant details about the plans for the driving parts of the project, but surprising little about walking and biking improvements. (Details will be online soon; my pictures didn't turn out great.) 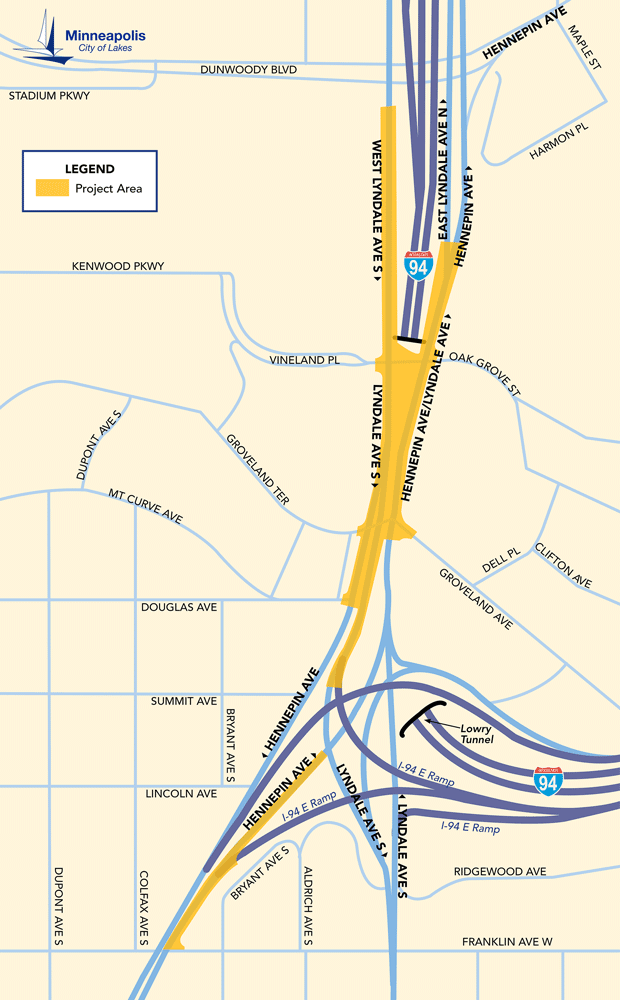 My first reaction to the City engineer was: "honestly, I'm disappointed." He said that it is very early in the process and they will be working out more detailed improvements for walking and biking as they gather this feedback and look at more options.

What is clear is that this is a road maintenance project (mostly fix and put back what is there). They aren't planning to think big and the budget doesn't allow that. Roundabouts, bus-only lanes, and fewer car lanes are all outside this project. Intersection improvements, narrower car lanes, and improved lighting are all in play. It's admittedly a bit frustrating that the "scope" of this project was decided in 2011 without public input and what is done now will be intended to last for decades.

Here's what I know about some key bike/walk areas:

Will they be doing something to transform the area like a roundabout or burying more of the interstate?

There is no doubt that this stretch of road divides downtown from Uptown, is unattractive, and takes up a lot of valuable real estate. Transformative ideas are outside of what is possible with this project as currently defined and budgeted. Unless something huge changes from City elected officials to give more money to this project and delay it, this project will look more or less like what is there today.

Will they add a sidewalk on the downtown side and separate where people walk from where they bike?

This isn't currently in the plan and I got the sense it is going to take some work to get this. This seems basic and a very clear safety need on this project. They plan to narrow the driving lanes a little from the current way-too-wide, which provides some space, but we need many people saying this is a priority. 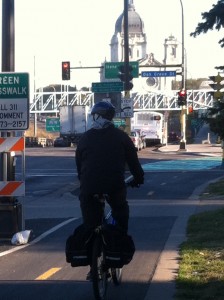 Will they improve the intersections for biking along the Loring Bikeway?

They will make some improvements to intersections, but it isn't clear how many. I asked about lights that give people walking and biking a slight lead on cars, straighter and smoother crossings for bikes, and clearer stopping and crossing zones (with green paint, etc.). I was told that all of those can be considered.

Will they extend a protected bikeway on Lyndale to Franklin or 22nd Street?

This is not currently within the project work. Adding it will require strong support from the City Council, especially Council Members Goodman and Bender.

Will they make it easier to cross Hennepin/Lyndale on bike and foot?

The designs show a slightly narrowed crossing distance throughout, but certainly nothing transformative. They offered the most details of the intersection with Oak Grove/Vineland Place. Those details showed new bike lanes connecting across Hennepin/Lyndale to connect existing bike lanes farther back on Oak Grove and Vineland Place. I wonder if we can get some elements of protected intersections included in that, but it certainly isn't currently being planned. The designs also included some reworking of the pedestrian crossings, but I expect it will still take two light cycles to walk across the full road (without serious hustle).

They also noted that they are planning to widen the sidewalk on the Walker side of the street (no details on whether green would be added), address some challenging crossings at Dunwoody and Groveland Terrace (but they didn't have details).

Engineers will be working with the Minneapolis Bicycle and Pedestrian Advisory Committees in April on additional details. We'll share more ways you can get involved soon. In the meantime, we encourage you to offer your questions and comments on the project website and share them here as well.

Were you at last night's meeting? What were your impressions? What are the improvements you want? What questions do you have? Let us know in the comments as it helps us determine our priorities for this work.