On Thursday morning, the Hennepin County Board held a briefing on the proposed reconstruction of Washington and Minnehaha avenues, and the protected bikeways (also known as cycle tracks) proposed for each. The County commissioners listened to presentations by county transportation staff. While the public was allowed to attend the briefing, only the commissioners asked questions and commented.

Rose Ryan, Hennepin County bicycle and pedestrian coordinator, defined a cycle track (which is sometime called a protected bikeway) as a bikeway that's physically separated from auto traffic and dedicated to bike use. Buffered bike lanes (like those on Park and Portland avenues) aren't cycle tracks because there's no protection from car traffic, and mixed-use paths (like the Loring Greenway) aren't cycle tracks because they're not dedicated to bike use.

The appeal of protected bikeways is well-documented. Study after study has shown cycle tracks to improve the safety of cyclists, and empower women, children, and seniors to ride bikes in cities. Some cycle tracks in Amsterdam and Copenhagen are more than 30 years old, and they've spread to American cities, too: Chicago, Indianapolis, Portland, Atlanta, and more. The Minneapolis Climate Action Plan calls for the construction of 30 new miles of protected bikeways (including cycle tracks) by 2020. The question is just where to put them. 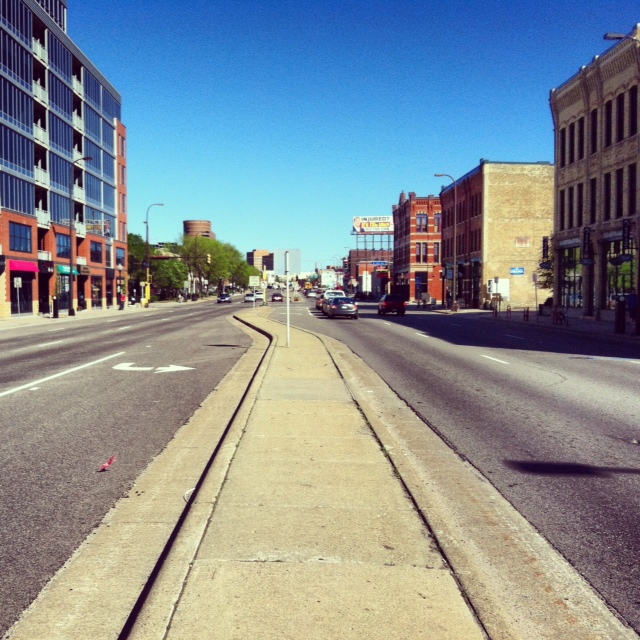 The public wants a cycle track on Washington Avenue

The county plans to rebuild Washington from Hennepin Avenue to Fifth Avenue by the end of 2015, with the intent to extend the chosen configuration southeast to 35-W at a later time. Craig Twinem, division manager of the county's transportation department, reviewed the public involvement for the Washington Avenue project. After the county reviewed nearly 1500 survey responses collected during two outreach campaigns, the public's voice was clear: they want a protected bikeway.

The clear public favorite is known as layout 3A (PDF), which places the curb between the cycle track and parked cars, and trees and landscaping between the bikes and pedestrians. The number of through lanes in either direction would be cut from three to two. County Commissioner Jan Callison asked how traffic could be accommodated by two through lanes instead of three, and Mr. Twinem replied that synchronized traffic lights will improve traffic flow, even with fewer lanes. There was more discussion about auto capacity. Staff explained that they are including long right-turn lanes where needed (including leading up to 3rd Avenue South) and that they would not propose something that they did not feels works from a vehicle traffic flow perspective.

Commissioner Peter McLaughlin shifted the frame of the discussion from cars to people, recounting a meeting he had with the chair of Downtown 2025, who strongly supports making Washington less of a barrier between downtown and the Mississippi River. Layout 3A would significantly reduce the pedestrian crossing distance.

When asked about the respective costs of the different layouts, Mr. Twinem assured the board that the difference in cost between building a cycle track and rebuilding Washington without a cycle track was negligible. If additional bike-specific signals are required in the final design, these could raise the cost of the project by 2% at the most.

Commissioner Linda Higgins asked about when bike-friendly changes could be made to Washington north of Hennepin. Jim Grube, Hennepin County engineer, said that they could restripe the road with bike lanes at any time and implied they could work with Minneapolis to do that to coincide with the reconstruction project.

A couple commissioners offered some questions and concerns, and it is clear staff will be looking to address those. The most prominent was about winter maintenance of the cycle track; Assistant County Administrator Debra Brisk from Public Works said that the County is in negotiation with the City to determine who will be responsible for plowing the cycletrack. Commissioner Mike Opat cited 1st Avenue North as a “sore spot” where winter maintenance causes problems.

Hennepin County staff will be seeking County Board approval “as soon as possible” for Washington and municipal consent this fall.

Minnehaha Avenue was last rebuilt during the Eisenhower administration, and it's likely that the configuration we choose now will stay put for another 55 years, so it's important to get it right. Project Manager Nick Peterson presented two concept layouts for the thoroughfare: 1) on-road bike lanes with a one-foot buffer, and 2) a two-way raised cycle track on the west side of the street. Both layouts kept the two lanes for car traffic and two parking lanes and add some left-turn lanes at intersections. Like the Washington Avenue project, the cycle track option is no more expensive to build than the alternative, but Mr. Peterson said that additional traffic signals could add a few hundred thousand dollars to the price tag (the potential cost savings from having less road surface were not discussed). The decision comes down to which option will better serve the residents and businesses of the Longellow neighborhood.

Mr. Peterson presented a list of advantages and disadvantages associated with each layout option, but the list relied on some myths debunked in Grant's blog post from last month. Many recent studies have shown cycle tracks to be safer than on-street bike lanes. A well-designed cycle track would not require a significant removal of trees or parking spaces, and winter bike-riding would be more convenient on a cycle track, when so many bike lanes are annexed by parked cars in the winter. Diverting novice cyclists from the sidewalk to the inviting cycle track would be a boon to pedestrians, too.

We hope the county commissioners consider the interests of all street-users as they weigh their options on these important projects. Washington and Minnehaha are great places for protected bikeways.