Hennepin Avenue from Lake Street to 36th Street is being reconstructed next year. The plans call for big improvements for people walking and new (unprotected) bike lanes. And trees!

The Lake Street to 31st Street block is one of the busiest walking streets in the city. The plan widens the sidewalks here and adds much more room for greening. That is done by removing on-street parking that no local stakeholders prioritized given the many off-street parking options nearby.

The plan also adds a new mid-block crossing near the exit of Calhoun Square. This area currently sees hundreds of people cross there daily and this will make it much safer.

We're disappointed to see that the sidewalk area will be narrowed at Lake Street to accommodate an extra southbound merge lane for cars. Such a design is less safe for everyone (especially drivers who run greater risk of crashes when merging), but the City has said that bigger changes would be necessary to manage rush hour traffic without that merge lane. We understand that they are building the design to be able to easily be changed to be safer later, which is smart. 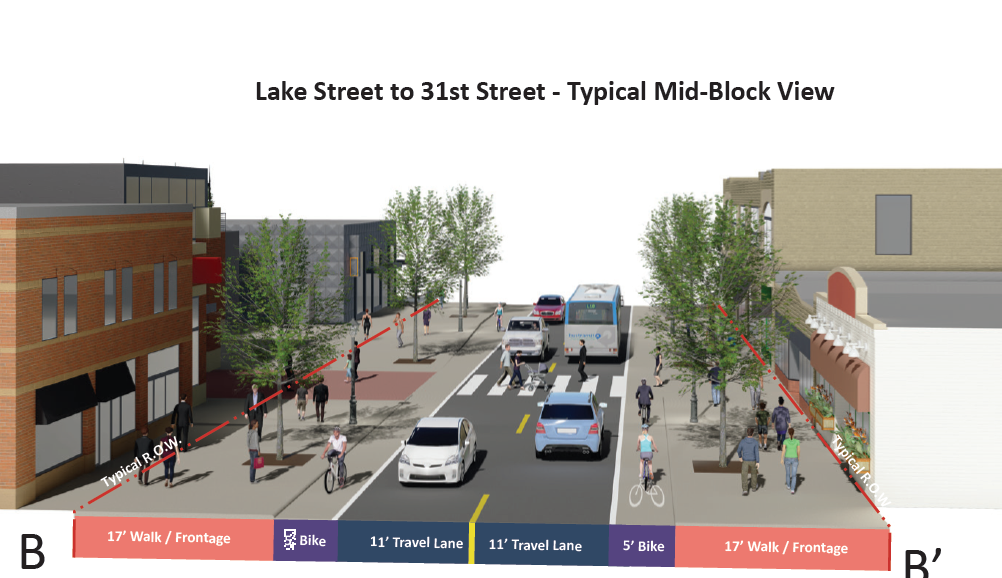 South of 31st Street, the sidewalk area will almost double from a typical (and terrible) 7-feet wide to 13-feet wide after the reconstruction. That will allow trees in the public street area, which is a great improvement. Bus stops will be made ready for the potential of future rapid bus. To make space for these critical improvements, parking is removed on one side of the street (40% of the parking). A City parking study found that parking 50-75% full on average, so it's a tradeoff work making to improve the walking environment.

The Pedestrian Advisory Committee had recommended protected bike lanes throughout the route to maximize the buffer zone between the sidewalk and the street, but that is not part of the plan largely because of challenges with bus stops (more details below). 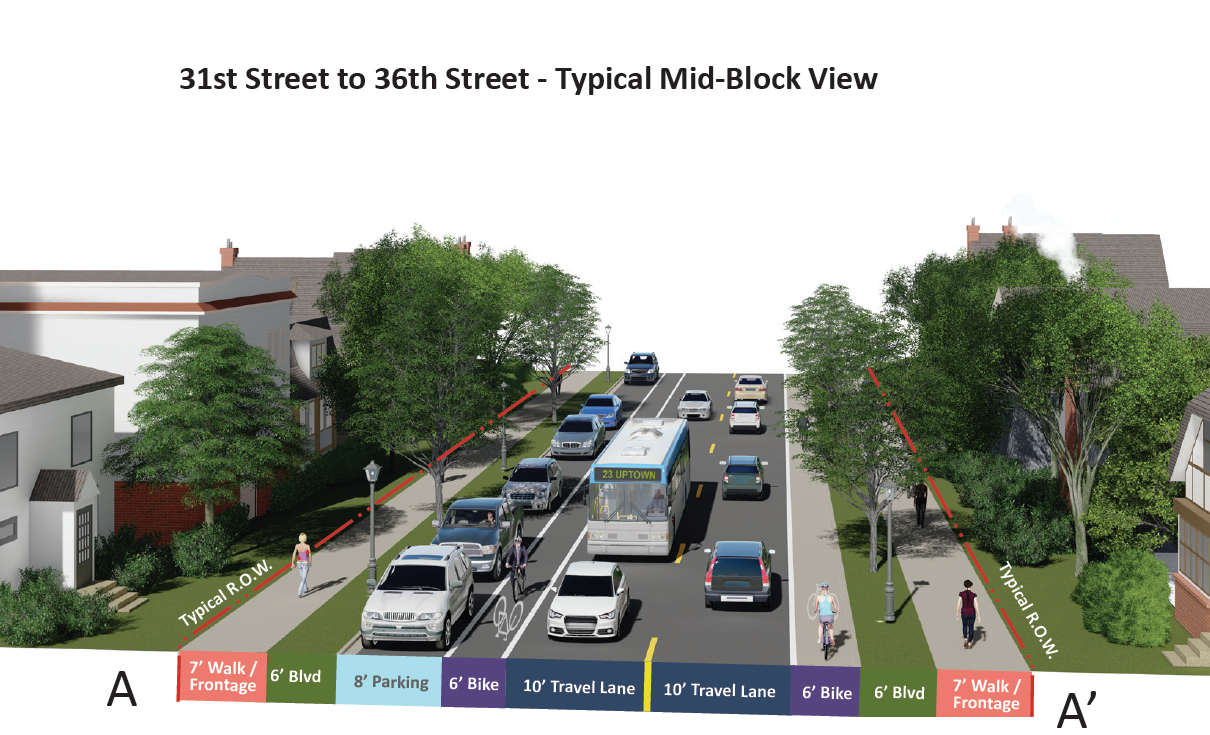 We are glad to see bike lanes included in the project. This will provide valuable new connections that make it safer and easier to bike, especially to Uptown businesses that are hard to get to via bike currently. There aren't any north-south bikeways for the 11 blocks between Bryant Ave (which is really isn't much of a bikeway south of 29th Street anyway) and the east side of Bde Maka Ska (which is only a southbound trail).

We hope that connections to these new bike lanes can be improved and that the City can look at things proactively to connect with these new lanes. Some potential valuable connections include:

We want to recognize that Public Works staff and Council Member Lisa Bender have done a lot of good work this project. The design is a good reflection of balancing priorities and vision with the new Complete Streets policy and reflects feedback from the many different voices who have participated in the process. The CARAG neighborhood also has done really good work on trying to balance all the needs in the corridor and engage people in the project.

You can see more details on the project:

We understand that some neighbors are upset about the proposed removal of 40% of parking south of 31st Street to allow for a safer street and street trees. Share your support for the Hennepin reconstruction project with Council Member Bender at [email protected]