Pilgrimages to the Netherlands are built into bicycle gospel in Minneapolis. People who get passionate about bike advocacy often end up trekking to the little low-lying bike-friendly country to see the light where it is brightest. American culture is so circumscribed by cars that it can be necessary to go to a different culture to escape the ever-pervasive car first mentality.

Several years back, Mayor R.T. Rybak took a trip to the Netherlands and the story goes he came back determined to make Minneapolis more like a Dutch city in terms of bicycle infrastructure. And, the city has made significant strides in bike infrastructure and puunder Rybak’s tenure.

Earlier this year, Minneapolis Public City Planner David Peterson (he's the primary one tasked with designing bicycle infrastructure) returned from a trip to the Netherlands. He shared his experiences with the Bicycle Advisory Committee’s Engineering Subcommittee at its September meeting as a way of informing and perhaps inspiring the members. This somewhat diligent MBC blogger was in attendence and planned to write about it promptly, but then completely procrastinated/forgot for a couple months. Luckily, Groningen is still there and David's photographs are still relevant. So now, much ado, is a little write-up on Groningen with photographs David took.

David focused on the Dutch city of Groningen, which the Atlantic dubbed the "The City Where Bikes Rule The Road" in a recent article. Most of the Netherlands is bike friendly, but Groningen takes it to another level entirely as you shall see. 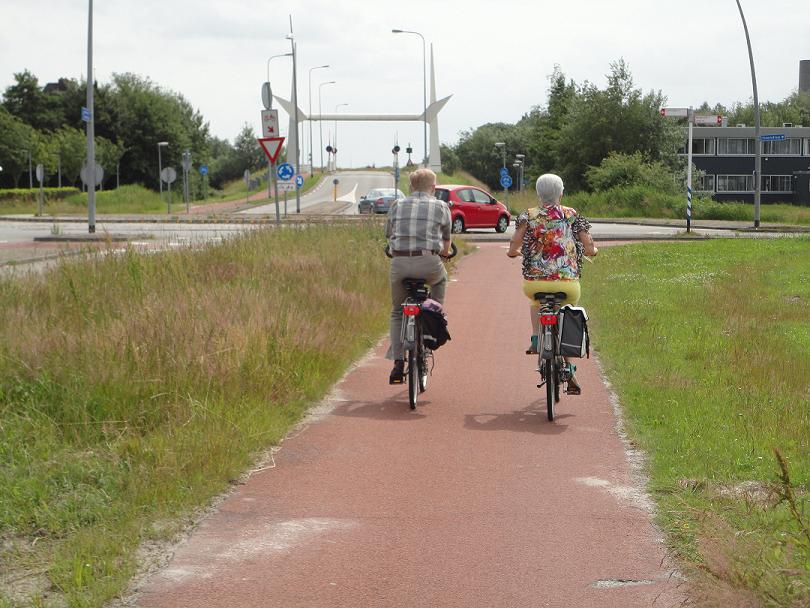 One big argument for investing in bicycle infrastructure is that it allows bicycle access to a wider segment of the population, such as this elderly, but still quite fit, Dutch couple. 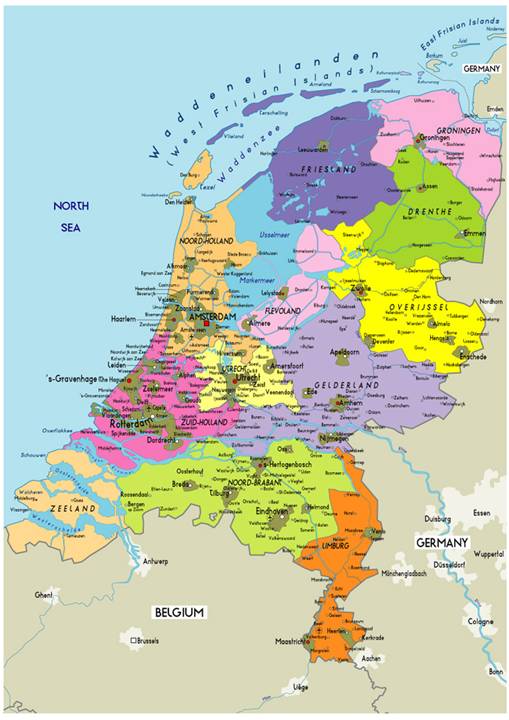 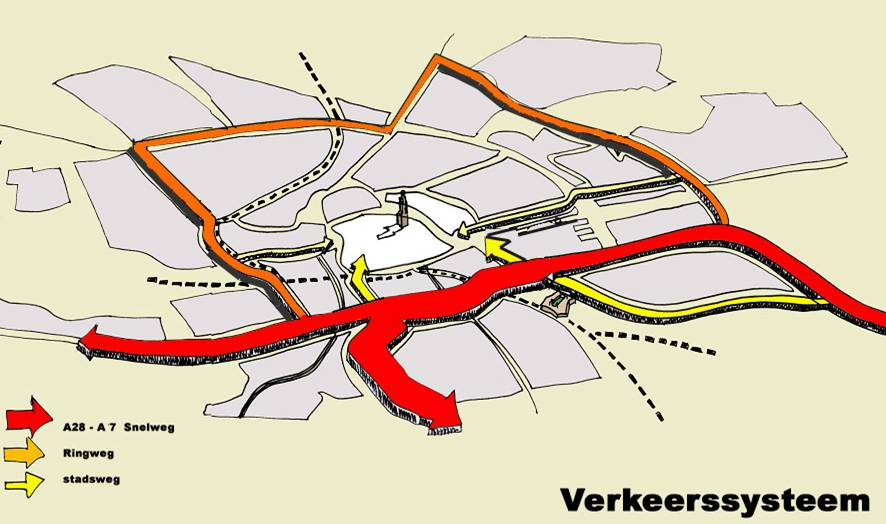 In the 1970's Groningen revolutionized its transit strategy. It effectively closed off the inner core of the city to automobiles by dividing the center into four quadrants and forbidding motorists from driving directly from one quadrant to another. Instead motorists had to use the ring road circling the city center, which is illustrted above. Yes, this does make transversing the city by car more tedious. This was the point. Get people out of their cars and into buses and onto bikes. 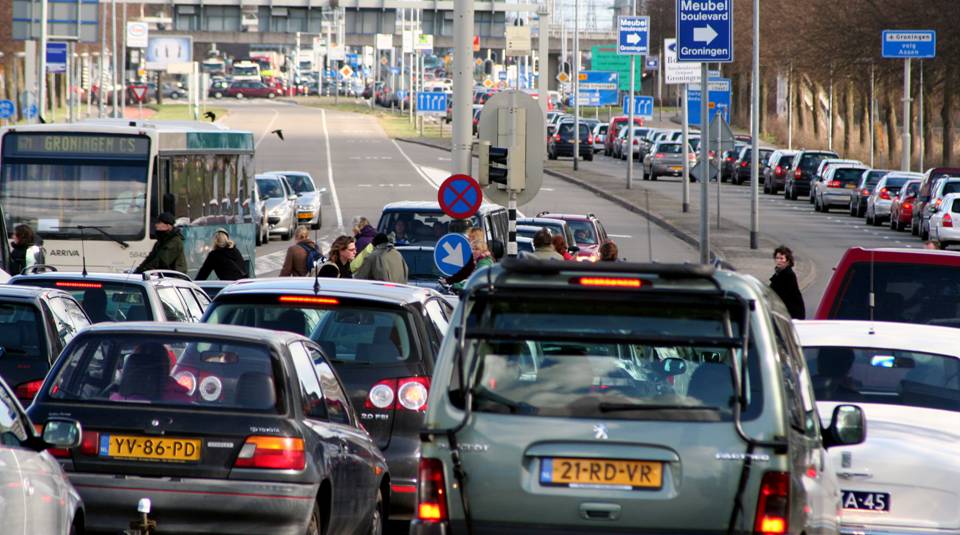 As you can see in this section of the ring road around Gronigen's core, cars still abound but I doubt motorists expect to achieve great speeds within the city. 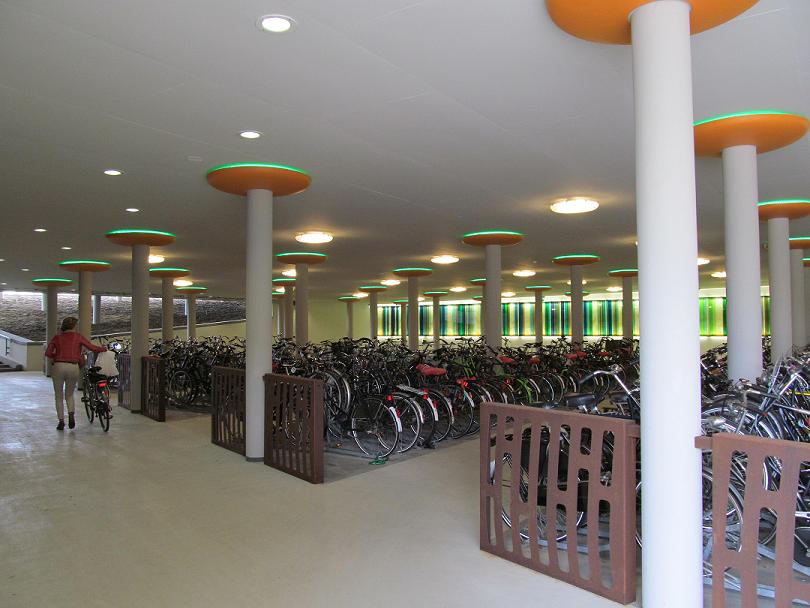 The multimodal strategy achieved its goal, as this packed public bike parking garage illustrates. Officials estimate that today 60% of all movements in the city are by bicycle, and there are 300,000 bicycles in the city compared to 75,000 cars. 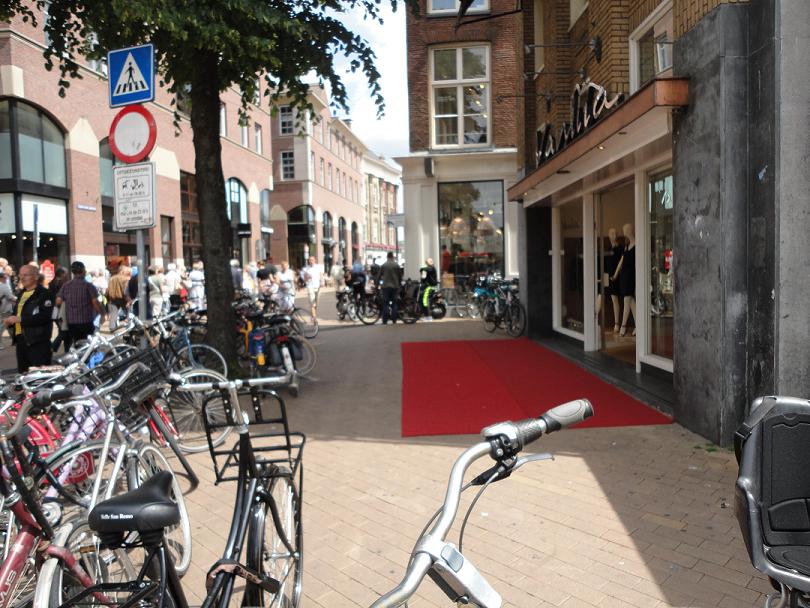 Groningen really has a parking problem--but not for cars so much as for bikes. On busy market days the city puts out extra temporary bike racks, but even then spots are hard to come by. This shop put a red carpet out front to remind bicylists to not block their door and window, which is prohibited by city ordinance. 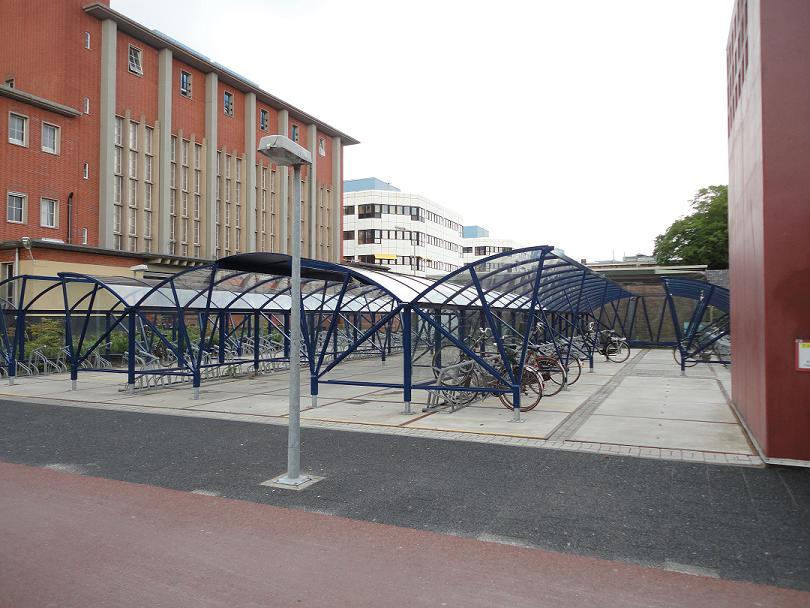 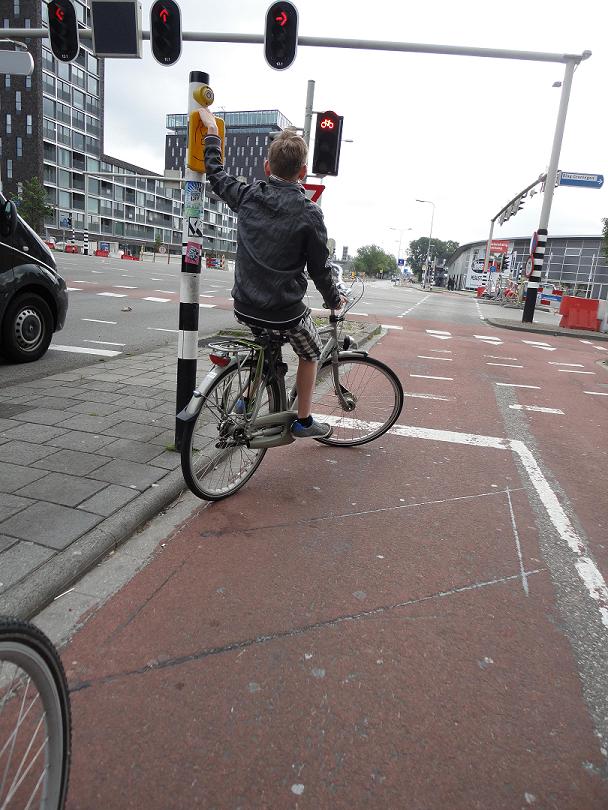 Bicyclists have their own traffic signal which allow them to cross separately from vehicles (but all at once which this video shows). David reported signal obedience is the norm for Dutch cyclists. Perhaps this is because the transit playing field is more level and bicycle education is much more rigorous. This isn't to say all the rules are the same for motorists and cyclists. For example, bicyclists are encouraged to bike the wrong way on one way streets. 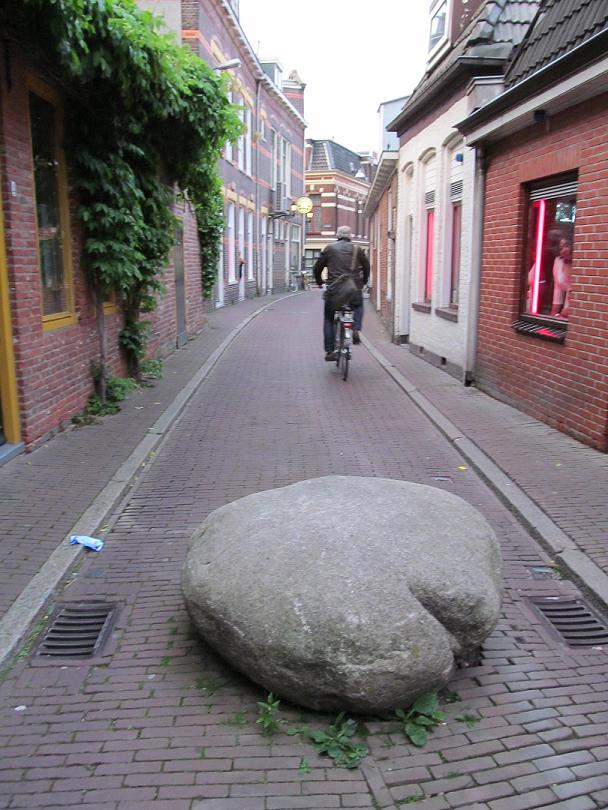 Dutch urban planners are creative when it comes to traffic calming. Take this rock for instance. 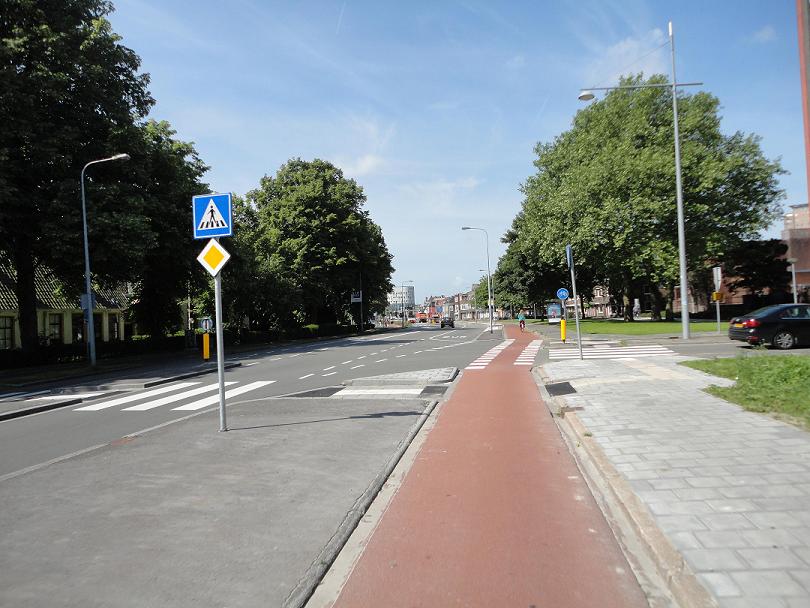 This cycle track is delineated from the mixed use road not only by the curb but also by its red hue. 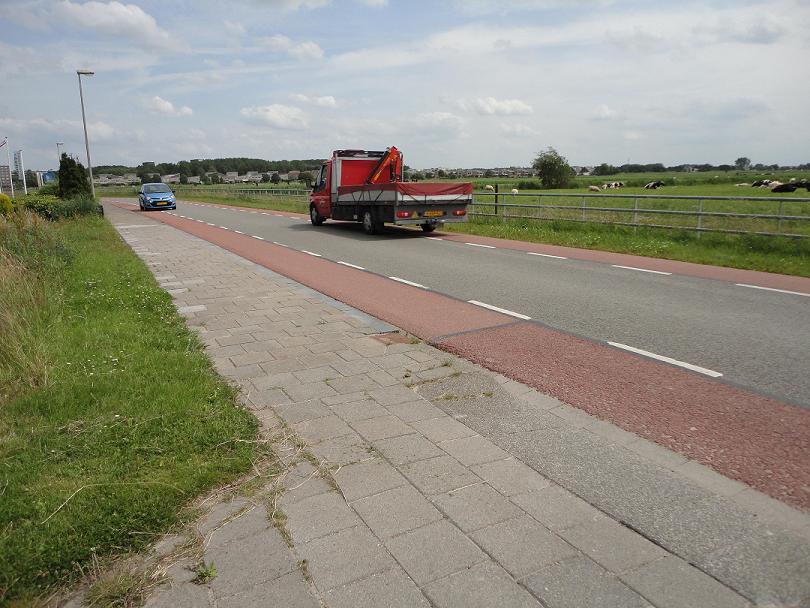 Groningen carried this red pavement for bike facility system throughout the city and even into the countryside on this bike lane, which provides a clear indication to motorists and cyclists alike.

Groningen has a 35-year head start on Minneapolis for its transit revolution and perhaps we lack the compactness to expect such high levels of bicycle movements (60%!). However, there are still definitely lessons to learn from this bicycle mecca and plenty of good reasons to implement them.

Transportation planning and urban planning have been integrated in Groningen since the 1960's. The emphasis has been on density and compactness rather than sprawl. As a result, 80% of the city's inhabitants live within 3 km (1.85 miles) of the city center, and 90% of the city's jobs are within that same radius. This means the vast majority of trips are 5 km or less, which makes bikings, walking or public transit the most sensible option.

Groningen has built 205 km (127 miles) or special bike infrastructure which has made bicycling more enticing. As the city is 32 square miles this means a ratio of 4 miles of bike infrasturue to 1 square mile. That ratio is higher than Davis, California ratio of 3.2 but only marginally so. Nonetheless, Davis only sees bikes accounting for just 17% of commutes (still good for best in the USA). Even Davis cites the Netherlands in their video. I think this indicates that the cultural shift was more instrumental in Groningen seeing such a jump in bicycling rather than simply building lanes and paths, which are still important.

Thanks again to David Peterson for documenting Groningen's bike facilities on his somewhat recent trip and sharing the photographs with me.