On June 27th, a crowd of about 35 descended from the hot streets of Northeast Minneapolis into the cool comfort of Honey to hear Dr. Melody Hoffmann talk about gentrification and bikes, and to ask her some questions. Dr. Hoffmann recently earned her Ph.D in communication studies from the University of Minnesota, where she studied gentrification and bikes in Minneapolis, Milwaukee, and Portland. She also blogs at phmelod.wordpress.com. After a short presentation, Melody answered questions from the audience, and we had a lively (but friendly!) discussion about race and class in bike activism.

When researching bike equity in Minneapolis, Dr. Hoffmann spoke to movers and shakers in the bike community. When she interviewed Mayor R.T. Rybak, she was surprised to hear that the biggest reason he was pushing for better bike infrastructure was to attract the creative class from cities like Austin, Denver, and Seattle. Her interview with a realtor confirmed her belief that bike infrastructure (like the Midtown Greenway) causes the value of nearby properties to rise. She also talked to the board of Twin Cities Greenways, and consulted the work of Melissa Checker, who studies the appropriation of eco-friendly language by high-end developers.

Dr. Hoffmann admitted that she had reached some provocative conclusions. People used to live, work, and make art in the space that is now the Midtown Greenway, and Melody argued that the cycling community was callous to their displacement. She criticized Nice Ride Minnesota for installing few stations in North Minneapolis in their first year, and she was wary of the prospect of a North Minneapolis Greenway, because it could be seen as outsiders imposing their values on an underprivileged neighborhood, and priming it for gentrification. "If you don't live in North Minneapolis, you don't have a say in what's going on," she said. "Stay out of it."

The event was lively and conversational. After Dr. Hoffman finished her presentation, Bill Dooley of the Minneapolis Bicycle Coalition and the Major Taylor Bicycling Club advocated using tools like volunteer-built homes, mortgage assistance, and mixed-income housing to mitigate the gentrifying effects of bike infrastructure. Jim Skoog, North Minneapolis resident and representative to the Bicycle Advisory Committee, mentioned that North Minneapolis residents experience health disparities in obesity, hypertension, and diabetes. He also emphasized that compared to the rest of the city, North Minneapolis has fewer amenities for active living such as accessible lakes, riverfronts, and trails. Others suggested that gentrification has beneficial facets, and if the process would reduce violent crime in the area, then it might be a positive change. 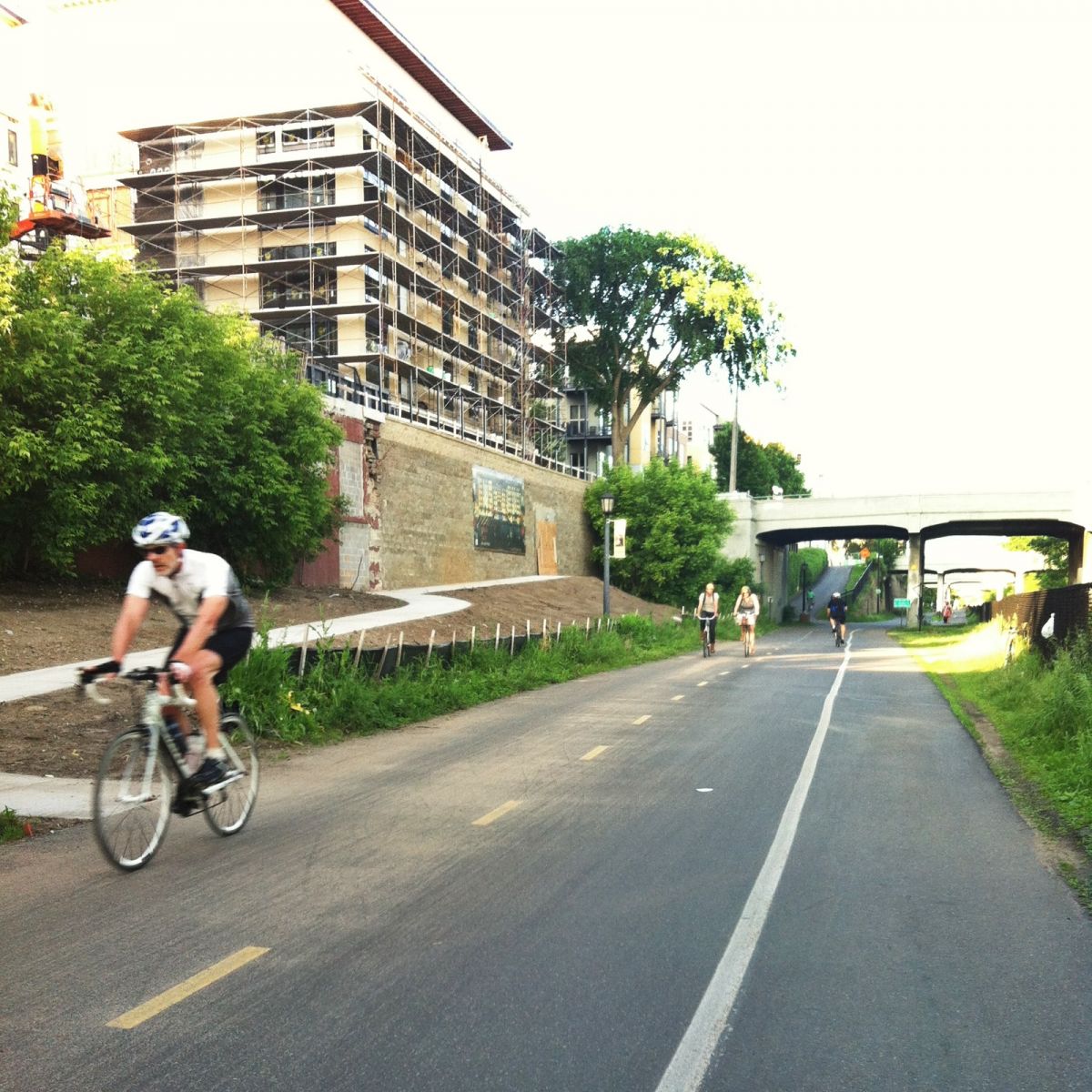 About an hour into the discussion, someone in the audience paused to ask for a definition of gentrification. Dr. Hoffmann said it was when white people moved into neighborhoods occupied by poor people of color, but some in the audience disagreed. One man in the audience pointed out that Uptown was largely white before it was gentrified, and that working-class whites could be displaced from a neighborhood by wealthier people of color. Hokan, a member of the Minneapolis Bicycle Coalition Board and the Minneapolis Bicycle Advisory Committee, recommended a recent article from Streets.mn that claimed that the cycle of renewal and decay is natural in cities. Despite some disagreement, all voices agreed that it is important to protect and encourage affordable housing in Minneapolis.

In closing, Dr. Hoffmann plugged "Highway Robbery" by Robert Bullard, a book about transportation racism, and encouraged the cycling activist community to take seriously the threat of gentrification that could accompany bike infrastructure projects. If you're interested in learning more about Dr. Hoffmann's work, you can send her an e-mail at MLH.RW24 (at) gmail (dot) com and she'd happily share a copy of her disseration with you. Opening up dialogue about race and cycling is a critical step to making Minneapolis a better place to live, and a better place to ride a bike.