Get Credit for Your Commute

Anything that encourages commuting by bicycle is a good thing, right? That’s what’s behind the ZAP Twin Cities program, according to Andrew Rankin of the Commuter Connection program. Minneapolis and St. Paul are the first cities in the country to try this, and it will be running in mid-August after the beta-testing period is complete.

Attach a small tracking device to your bike and ride next to a ZAP Reader on your daily commute. Your device will record your presence and give you mileage credit. You don’t have to stop, simply ride within 15-20 feet of the device to get your tag "zapped."


Look for an official announcement from Commuter Connection in the coming weeks. Right now they are testing all the stations, and finishing the final details. 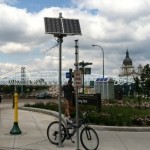 Bike near this station as you commute into downtown Minneapolis to get credit for your ride.