Franklin/Cedar/Minnehaha- Your Feedback on 3 Concepts

The good news is that Hennepin County, the City of Minneapolis, and other local groups are working on improving this intersection. The initial design showed stopping car traffic on Minnehaha north of Franklin, squaring up car lanes, and improving designated turning lanes, but did not have much in the way of specific designs for bicycles. Since then, the County provided three options, which are all detailed in this post. 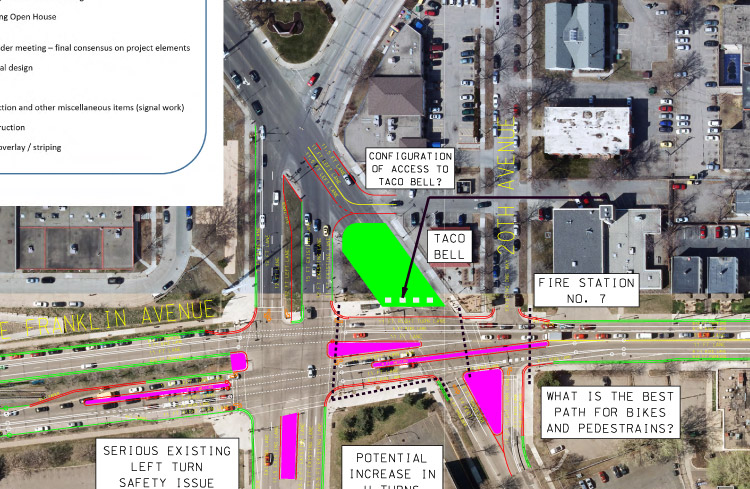 Your input informs our advocacy

All of these concepts have their challenges, and we are working to find the combination that is safest, most comfortable, and best. Your input and conversation, both through an online survey and at our Walk and Talk, are helping us get closer to an advocacy position.

Thank you to Andy, Simon, Marj, David, Jim, Joe, Emily and Ethan for walking and talking about the complicated intersection of Franklin, Minnehaha, and Cedar.

These are the most common ways you moved through this intersection:

Which concept was preferred?

17 of you preferred Concept 1. Your responses mentioned that this concept “avoids” traffic and the intersection (5 mentions), is “direct” (4), and “utilizes 20th” well (2).

“Less traffic lights to wait at.”

“No matter which concept is chosen, the ‘goat path’ on 20th needs to be improved.” 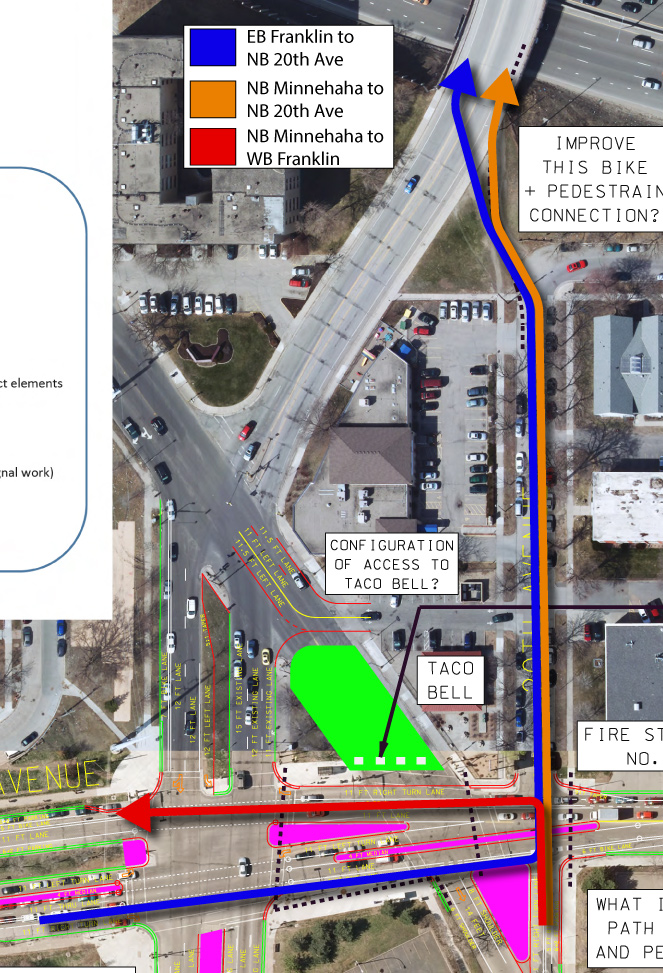 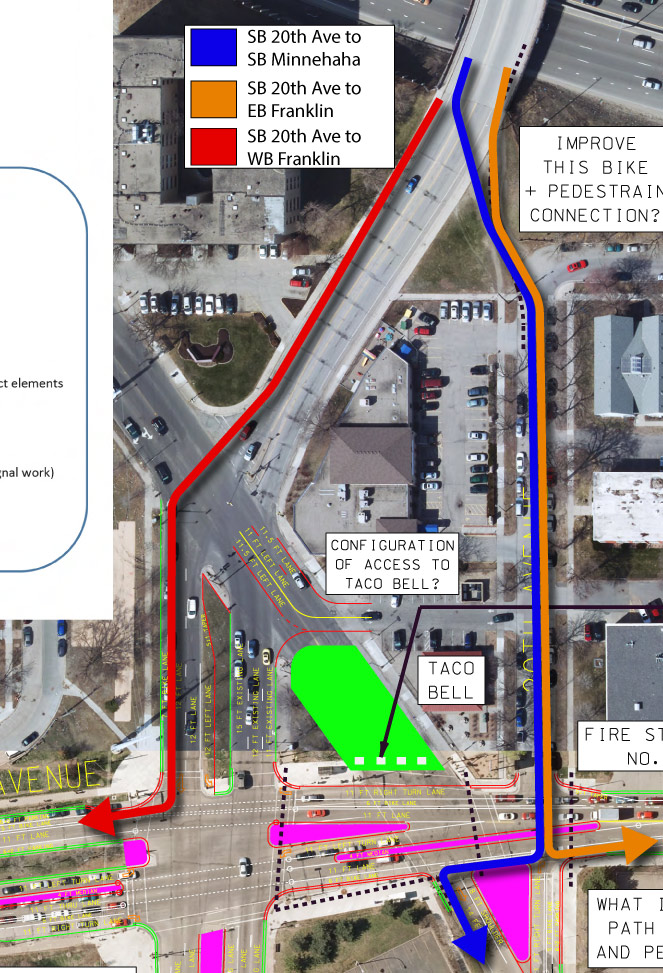 17 of you preferred Concept 2. Your responses mentioned that this concept is “intuitive” (6), and “direct” (5), allows bikes to “avoid the intersection” (3), and you requested that the “goat path be improved” (2) and the “plaza be beautified.” (3) Confusingly, two people said they liked how “20th is utilized,” and two people said they didn’t!

“Future improvements to the plaza would make biking better in that short stretch. We need to plant trees and beautiful this space.”

“Concerning because of the number of lanes you must cross on Franklin." 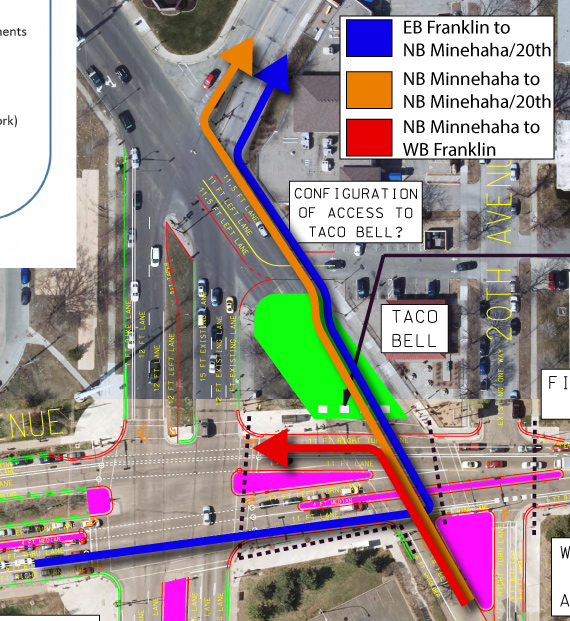 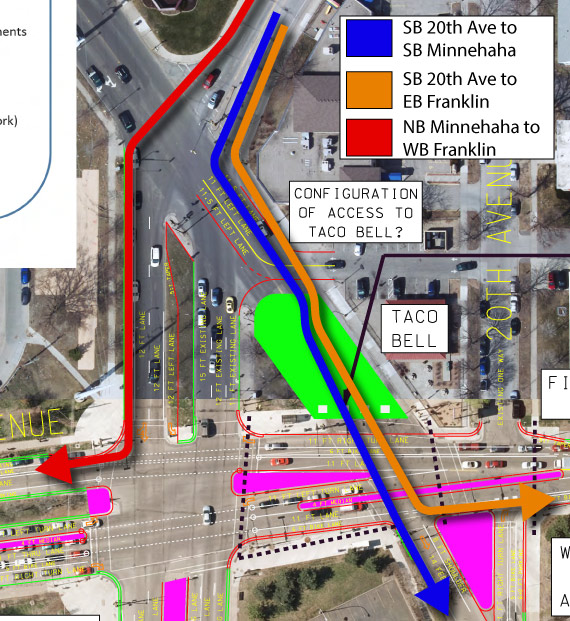 12 of you preferred Concept 2. Your responses mentioned that this concept uses “safe, comfortable protected bikeways” (7), and that it overall was a “safe” (2) option.

“A protected bike lane would make me feel much safer on my bike in that particular area.”

“If you have something ‘different’ like a protected bikeway for a block or two, it will be confusing for everyone.” 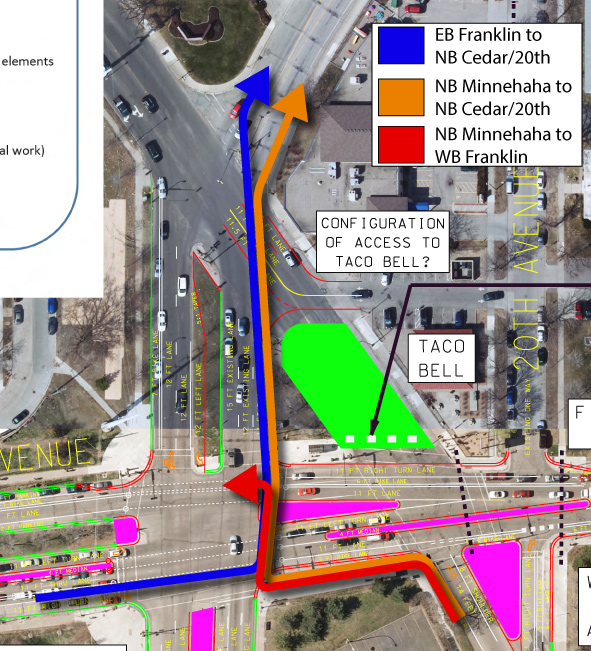 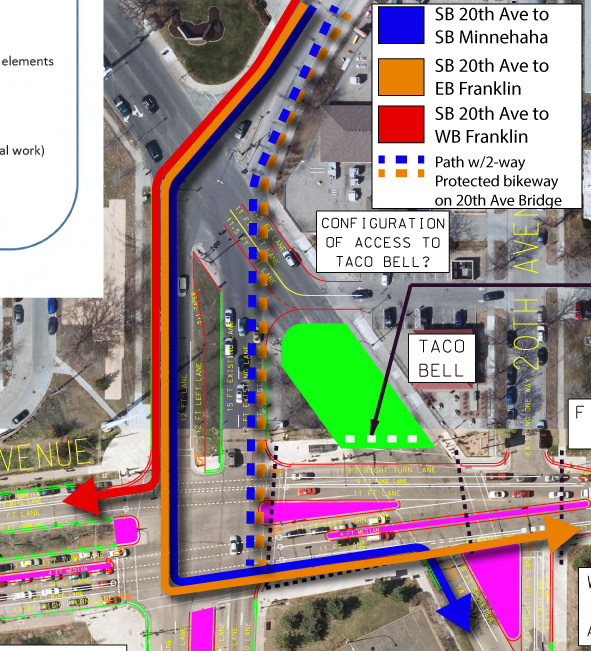 There were other ideas, ranging from a European style roundabout replacing the intersection, to leaving it as is. We heard you say that you would like a connection to the Hiawatha trail, the “goat path” leading to 20th should be improved, the “plaza” area near Taco Bell needs to be made into something beautiful, and that there should be lights for crossing.  We also heard the idea of providing a left-turn bike lane for bikes traveling eastbound on Franklin to northbound Cedar/20th, which could replace the median in the current plan.

Thank you for your input!

As we get updated plans from the County, we will continue to ask for your feedback as we form our position and advocate for the best possible biking and walking infrastructure for this complicated intersection.