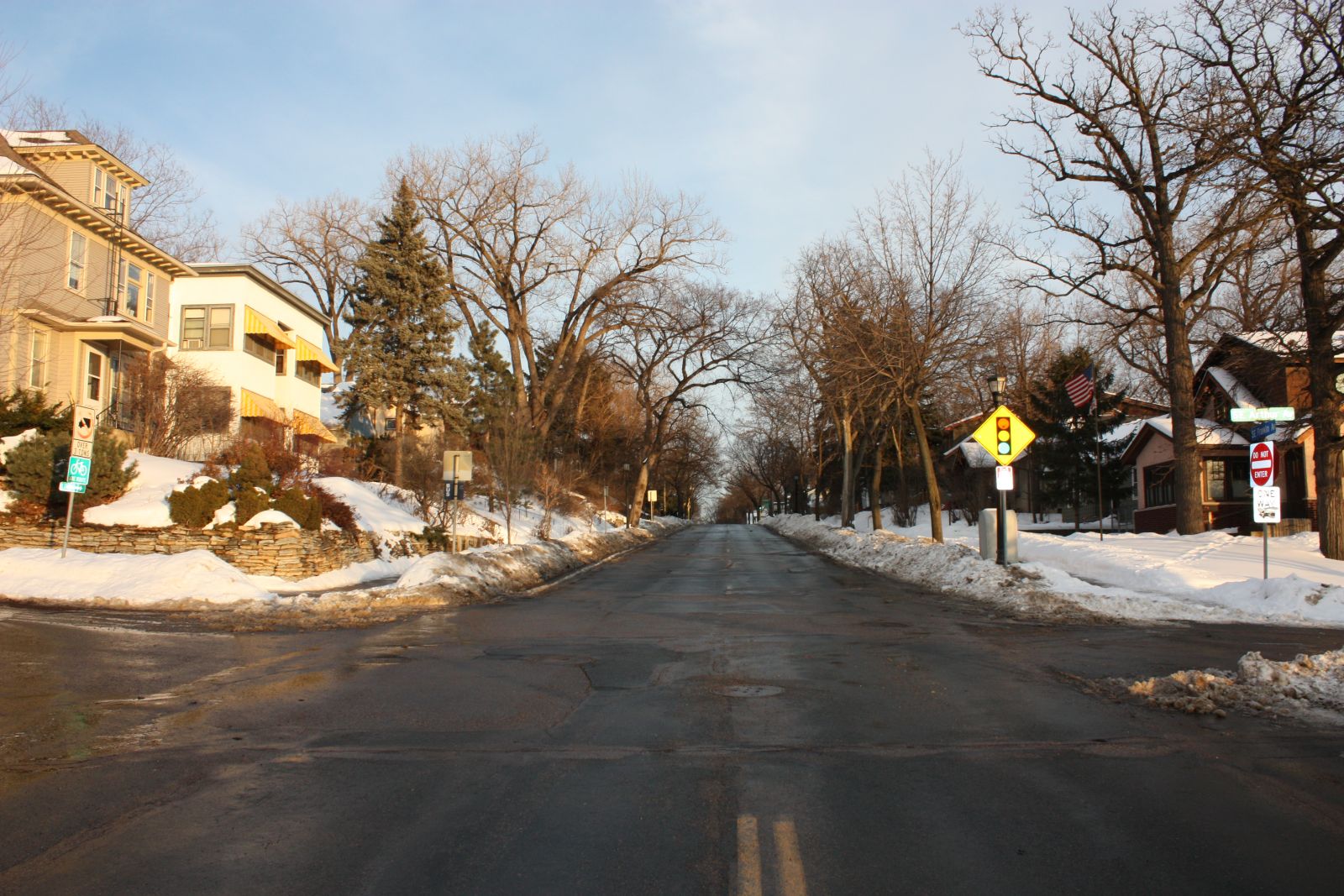 We are looking east up Franklin Avenue SE from it's intersection with Malcolm Street SE. This is right about when the hill really starts kicking many a bicyclist's butt.

As I mentioned in my post, Franklin Avenue SE featured prominently in the January 14th meeting of the Engineering Subcommittee. The Minneapolis Public Works staff had recommended it as one of the six resurfacing bike projects. Peter Wagenius, one Mayor Hodges's policy aides, questioned this decision. After much discussion, the subcommitee tasked Wagenius and BAC Member Robin Garwood with gathering more infromation to see whether the resurfacing could be delayed until 2015 to provide the community with more time to implement its hoped-for bike lane on Franklin Ave SE. They were told to report back at the full BAC meeting Wednesday January 22nd.

Wagenius lives in the Prospect Park neighborhood and told the subcommittee that the Prospect Park East River Road Improvement Association (PPERRIA) is advocating for a protected bike lane on Franklin Avenue SE and already has a plan drawn up.

Wagenius argued doing a striped bike lane might make it harder to get a protected bike lane built and also make the community feel shut out of the decision-making process. What the neighborhood really wants is a complete overhaul and greening of the street, he said. Wagenius believes the city should wait to resurface Franklin so the community has a fair shot at winning approval for its design.

Currently, Franklin Avenue SE has a bike lane only briefly on the eastbound uphill side from the bridge over the Mississippi to Thronton Street SE. Near the bridge on the downhill side, a right turn lane eats up space for a bike lane. Even without a dedicated bike lane, biking isn't too bad between Thronton and Malcolm because the street is wide and no parking is allowed in this section. From Malcolm east the road narrows and the shoulder is lost, leaving bicyclists to share the road with motorists and, in some places, parked cars. This is where it gets especially dicey. 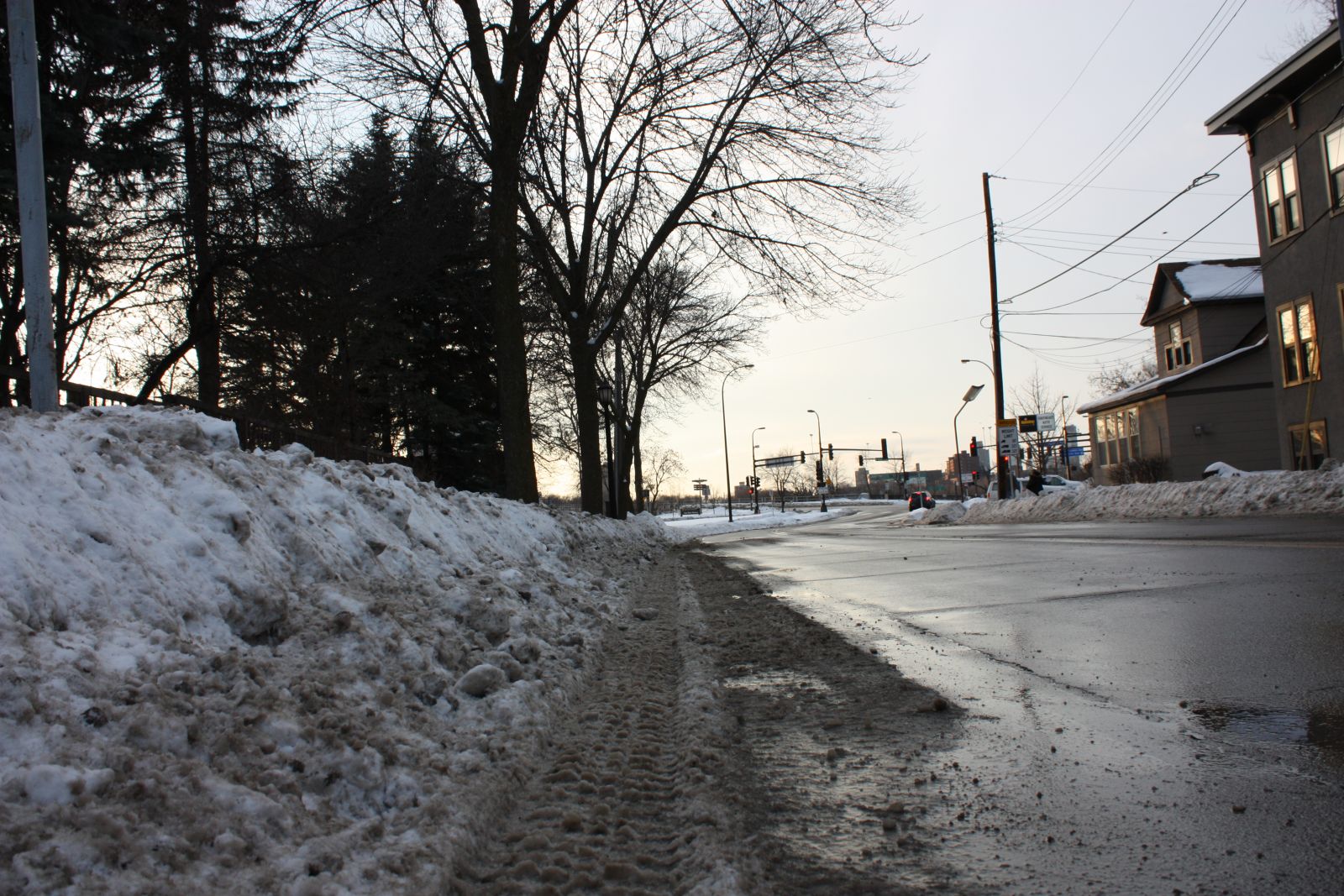 This is where the brief bike lane from the river to Thornton would be if not obscured by slush.

Futhermore, the road is in pretty bad condition which can make the climb up or coast down even more uncomfortable and possibly dangerous.

PPERRIA joined forces with the Saint Anthony Park Community Council (SAPCC) to participate in a project called Bridging The Gap. The project began in 2008 after gaining a grant from the Univesity of Minnesota Good Neighbor Fund. The goal was to better connect the three neighborhoods, which are bisected and cut to pieces by Highway 280 and I94. The group set about gathering input and exploring transit options. After the investigations, the group issued this report in 2009. 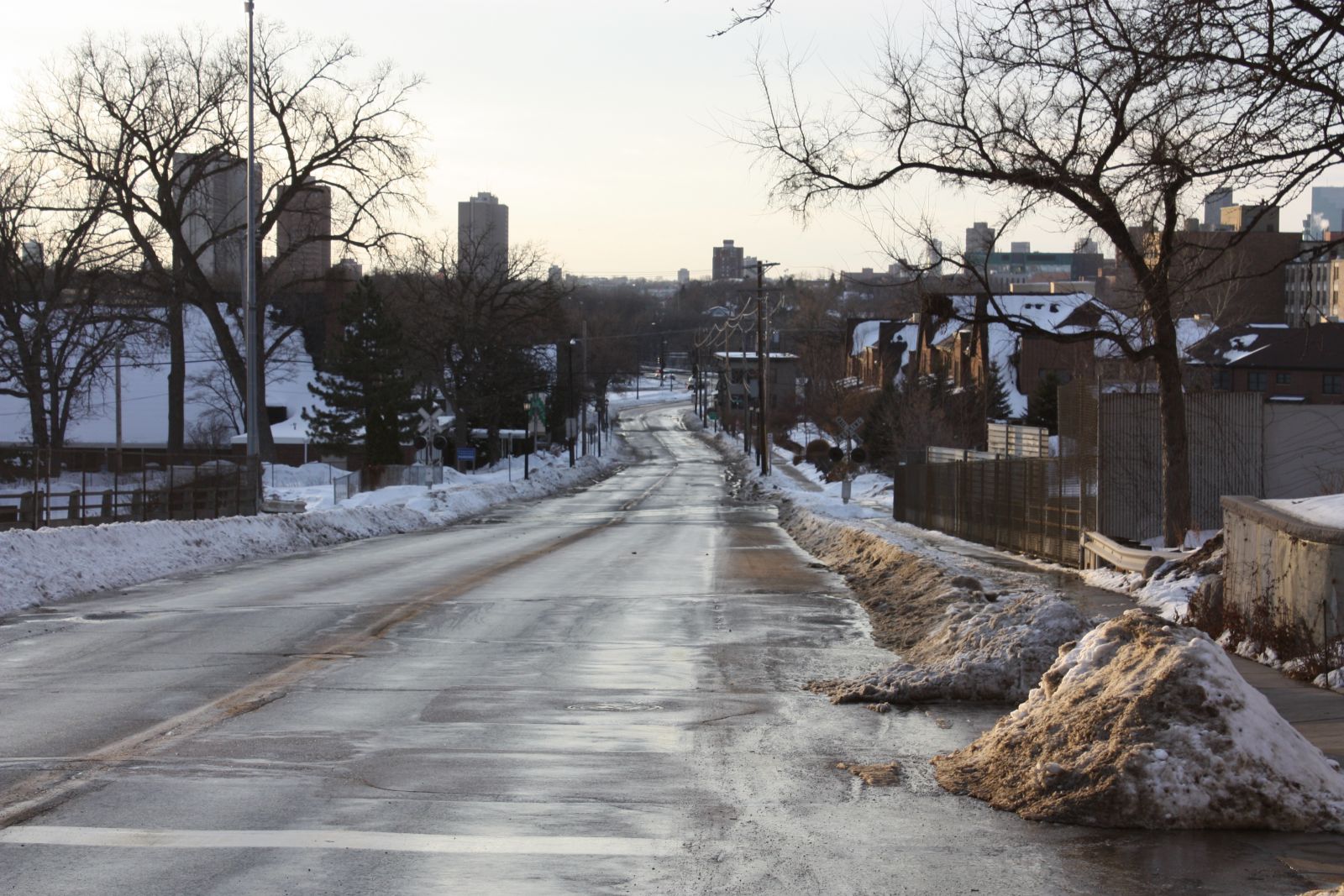 Franklin crosses I94 on this bridge. The roadway is wide here and parking is prohibited, leaving ample room for bicyclists. Fitting a bike lane would be easy in this wide section.

The report included a survey of Franklin Avenue SE residents showing that 98% of respondents (48 out of 67 residents responded) said it was acceptable to give up one side of parking. 85% would like to see a dedicated bike lane on Franklin. Just 3% said no change should be made.

The Bridging The Gap report included a street design to be implemented during a complete reconstruction of Franklin Avenue SE. The design calls for a tree-lined boulevard with a bike lane and single sided parking. It didn't appear to me that the bike lane was protected, but prehaps that was to be added later, not in this initial design. It also prossible PPERRIA also has another plan with a protected bike lane.

Protected bike lane or no, PPERRIA has a plan in place for a more bicycle friendly Franklin Avenue SE which might be of use to Minneapolis Public Works. The Bridging The Gap plan seems to envision completely redoing the street. All that was slated in 2014 is a resurfacing. Wagenius said he thinks it's likely PPERRIA has enough support to gain approval for their complete overhaul of the road given enough time.

The full BAC will find out on Wednesday if delaying the Franklin resurfacing is an option. If delay isn't an option, the BAC might find itself in a dilemma. Would we restripe the road as is and bide out time to fight for a complete overhaul? Or would we be able to design a PPERRIA's hoped for street with a solid bike facility in less than a year?

PPERRIA holds their monthly meetings on the fourth Monday of the month, which would be January 27. Meeting are held at Prospect Park United Methodist Church from 6:30 p.m. to 9 p.m and open to the public.