Five Things We Hate About Traffic Lights When We’re Walking 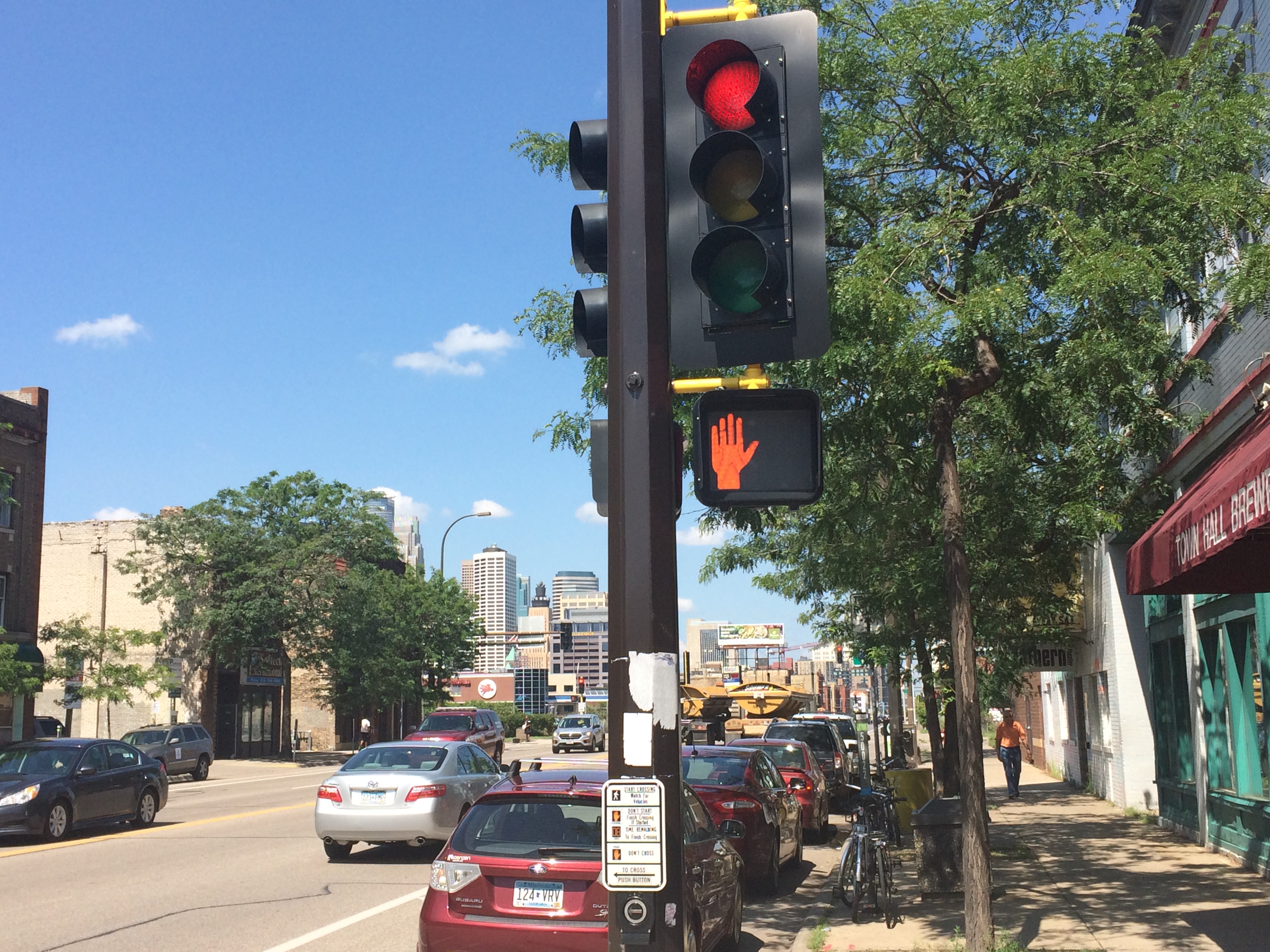 Stop lights have a big impact on the safety and ease of walking, but pedestrians are mostly an afterthought in stop light design. Here are five problems with traffic lights for people walking. We understand that the City is starting to think about how stop lights work for people walking, and we hope to be able to report on progress soon.

Pedestrian deaths have jumped in recent years and most crashes happen at intersections. Our Streets Minneapolis has expanded to include pedestrian-related issues to ensure that the streets are safe for all individuals, regardless of whether they are biking, walking, or rolling. The Pedestrian Work Group at Our Streets has been focusing on some key issues related to pedestrian issues, including safer crossings and signalization at intersections. This list comes from Pedestrian Work Group members Julia Curran and Julia Wells.

What would you add to the list? You can share pictures of problems you see with #MplsWalkLight.

We’ve all seen the drivers who are so impatient to get where they’re going that they speed their cars into the intersection to take a left turn the second the light turns green--completely oblivious to the idea that a person may be trying to cross the street. In fact, this situation has become a regular occurance in my day. As much as we may wish that drivers would just slow down and take the time to look, there is a simple and inexpensive solution: program the walk signal to turn white a few seconds before cars get a green light. This lead time allows pedestrians to get a start crossing the street, making them much more visible to drivers. The City has put in Leading Pedestrian Intervals (LPIs--the engineering term for giving people walking a head start--and more visibility to turning drivers--to cross at lights) at a few locations, but we could use it at more.

Beg buttons are those buttons at traffic signals that you have to climb piles of snow or interrupt intense conversation to go over and push. You never know if that person who’s standing right next to it pressed it. You also never know if you need to push it. Or if it does anything. If you find yourself spiraling into obsessive interests, like me, you might find yourself sitting on a wall at 10PM on a weekday, timing how they cycle.

Some green lights always have walk signs. Some greens only do when pushed. Some won’t even turn green unless pushed. Sometimes pushing makes it take longer to get a green to cross on foot. Some remain inaccessible, particularly for those with limited mobility, for much of the winter, seemingly a target so those plowing snow know where to dump it.

Beg Buttons are conceptually different than those buttons that you push for the auditory pedestrian signal--those are basic accessibility devices helping people with limited vision independently navigate the city. Physically, they’re sometimes the same. How can you tell? You can’t! There’s no explicit (or even subtle) marking or rhyme or reason to when these are used. We hate the indignity of being forced “beg” for a walk sign to cross the street in our city, and still having to wait a minute and a half before being allowed to cross. Even worse, the system is obtuse, and virtually impossible to learn as such--at best, we know our most frequented lights as discrete systems, an unconscious memorization of the phase order of the cycle, to determine whether or not that beg button is necessary for the green light.

Walk signs are governed by a feet-per-second calculation set at the federal level, but I’ve heard more than one person with limited mobility or a slowing walking pace comment on how they might as well be “run signs.” When I’m with my father, who is elderly and walks slowly, we often end up with a red light by the time we reach the far side of the street, despite his hustle. And yet, because of how long most light cycles are, we’ll start crossing even when there’s only a few seconds left--for him, standing is much harder physically than walking, and doing so for minutes while waiting for the next green just isn’t feasible, even in clement weather.

5. Designed for Drivers, not for other users

The more you pay attention to traffic lights, the more you notice traffic lights. While there are guidelines for how to time lights in urban settings to plan for very basic pedestrian use, it’s not clear that those are in use in Minneapolis. Lights are timed to move drivers only. Some cities around the world are starting to try lights that are responsive to the varying needs of people outside vehicles, for example shifting with inclement weather. Right now, our lights are timed exactly the same in frostbite weather as they are on the most pleasant days of spring. City staff have confirmed that traffic lights are not timed to consider the needs or comfort or behaviors of those outside cars.

Proof is around us every day. One of the more astounding pieces of evidence I’ve stumbled across was walking the length of Nicollet downtown during rush hour, playing the part of a law-abiding citizen for a dozen blocks. Obeying the traffic signals and pacing myself with random passersby (for science, you know!), I just missed every single green--by my rough calculations, obeying the traffic signals, rather than using my usual cross-when-safe technique, cost me about four minutes walking only ¾ a mile. A traffic engineer would be hard-pressed to better delay me from my meetings.

What’s missing from this list? What would you add? Join us in sharing your experiences with stops lights with #MplsWalkLight.