Finding the best north-south protected bikeway in heart of downtown 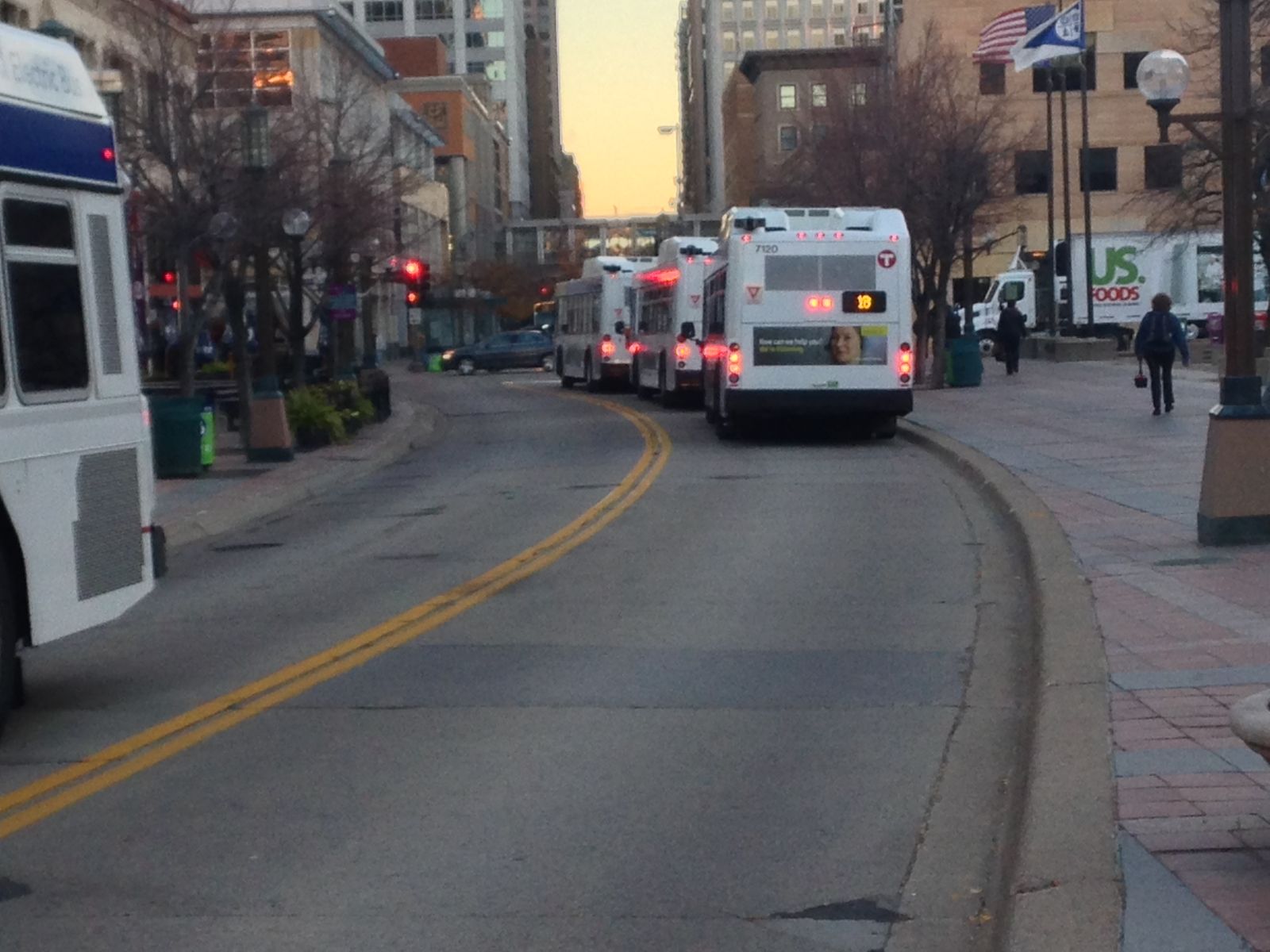 A north-south protected bikeway through the heart of downtown is a critical need for Minneapolis. Getting this right would open the door for many new people biking downtown while also further growing downtown as a destination for people to live and work and businesses to locate.

The fact that Nicollet Mall is going under the knife and will be closed to bikes later this year or early next (for a couple years) means that a decision needs to be made soon since without Nicollet there is no bike route in the heart of downtown.

Here is the context and tradeoffs for finding this critical route.

City staff are currently recommending 3rd Avenue S as the solution in the draft protected bikeway plan. While we prefer a different route, we understand that 3rd Avenue may be the best option for this essential connection given other constraints. We do want to ensure that if 3rd is the final choice, that it is done right and offer some ideas for that below.

A decade of decisions pushes bike routes to the margins downtown

Over the last decade, bikes have largely been left on the margins of a number of key decisions around downtown streets. There used to be popular bike lanes on Hennepin Avenue (which were also unsafe and needed changes) and Marquette and 2nd. Neither were comfortable for a wide range of people interested in biking, but they were a starting point.

When Hennepin (and 1st Ave N) were converted to two-way streets in 2009 and Marquette and 2nd were converted into express bus routes (both good projects for other goals), bike lanes were removed from all three streets. Instead, bikes were moved to a poorly designed and connected route on 1st Ave N and Nicollet Mall was reopened to bikes after a strange period of being banned. The Minneapolis Bicycle Coalition formed at that time largely because of the feeling that big decisions were being made with too little consideration for biking even while biking was booming (bike commuting in Minneapolis jumped 180% between 2000 and 2010).

Fast forward to today... Most people (average of about 1,300 people biking a day) use Nicollet Mall as their north-south bike route in heart of downtown. But the Mall leaves much to be desired for biking. We hear two very common complaints: 1) it's slow with slow-moving buses and poorly timed stoplights and 2) the buses make an uncomfortable place to ride, especially in rush hour. (We certainly also hear from some people who love riding Nicollet Mall.)

Nicollet Mall will be reconstructed in 2015-17 and, again, will have no meaningful improvements for biking. With streetcar being talked about in the future, it is likely that Nicollet will become worse--not better--for biking. While protected bike lanes were discussed for Nicollet, we did not meaningfully pursue it because of a recognition that walking was the priority on the mall and that a decision had already been made to keep transit on the Mall (there wasn't room for all 3 of those).

Many people also use Hennepin and 3rd Avenue S to access the heart of downtown. Both streets are poor for biking and serve only very confident bicyclists currently.

So, how will people get north-south to/from/through the heart of downtown? 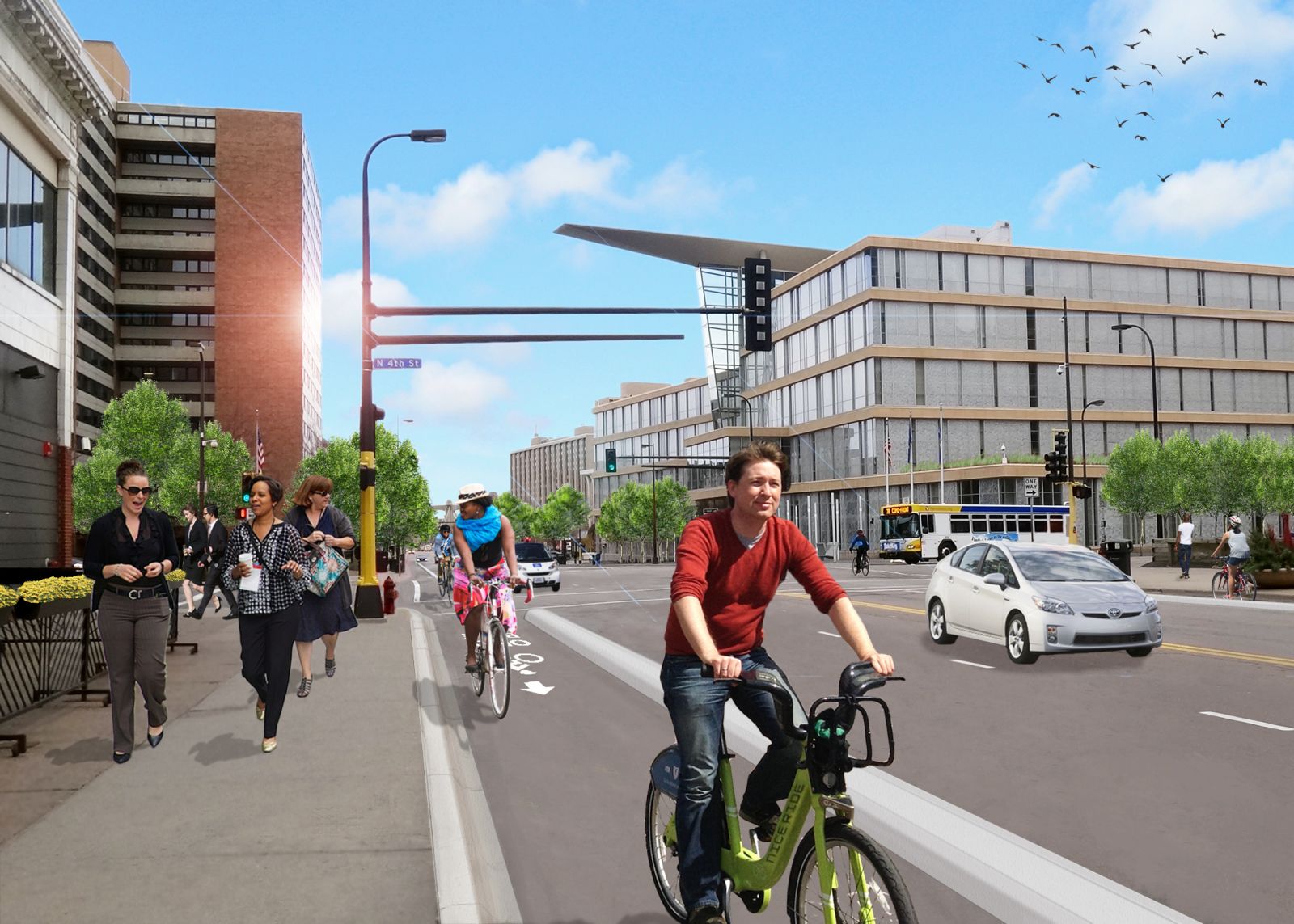 Hennepin? Not now. We hope to see a protected bikeway on Hennepin in the future to serve that part of downtown, but because of space realities, that will need to be timed with a reconstruction project and that timeline is not yet set. We certainly hope Hennepin can look like the picture at right by 2025, but it is not going to be the immediate solution.

Nicollet? No bikeway planned. As was mentioned, Nicollet Mall will be closed for two years coming up and then won't be getting any better for biking in the future. Nicollet certainly serves as a valuable option for people biking downtown (and we would strongly oppose any attempt to ban bicyclists again). 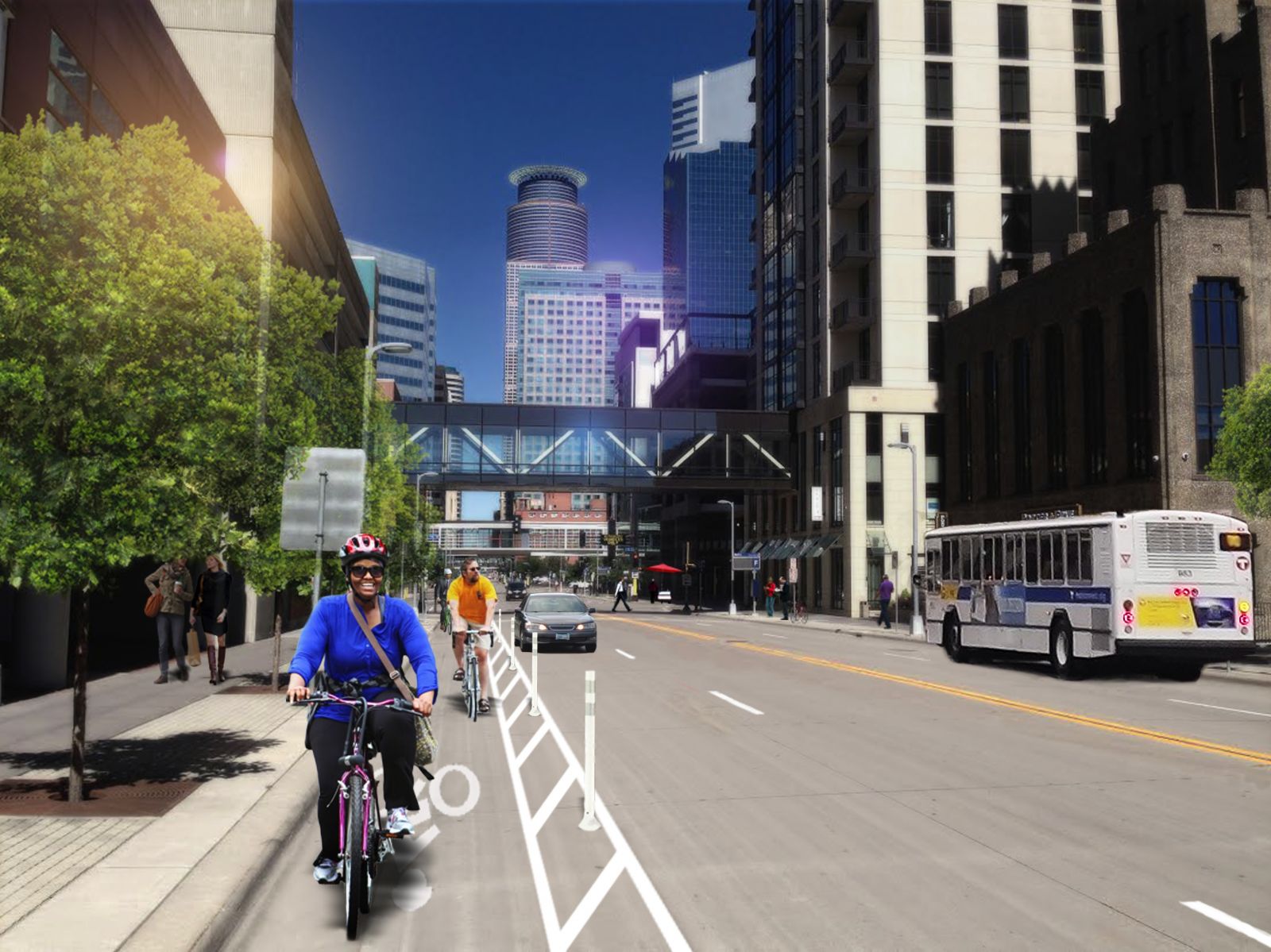 But adding protected bike lanes on Marquette and 2nd is a bit tight and Metro Transit has strongly opposed narrowing the 24-foot double bus lane even 1 foot. Metro Transit has a lot of leverage in this situation as Marquette and 2nd was redone with federal support and they could threaten lawsuit if the City narrowed their bus lanes against their wishes. So, while we think at least trying a pilot makes a lot of sense, it doesn't look feasible unfortunately. We've been hoping for Marquette Ave and 2nd Ave S protected bike lanes as in this picture. Marquette and 2nd used to be the #2 bike lanes in downtown before bike lanes were removed with the express bus improvement project (a project that certainly overall has been great). 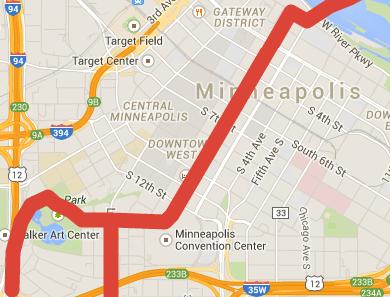 This would be our preferred option for serving the heart of downtown. 2nd Ave S has the potential to connect very seamlessly to potential protected bikeways to Northeast (via 3rd Avenue bridge), Whittier and points south (via 1st, Nicollet, and/or LaSalle/Blaisdell), and the Loring Bikeway, Bryant Bike Blvd, and points south (see map).

Such an option also seems like it could be both comfortable and safe. It would look like this at right with just the flexible post barriers (planters could be added in future with slightly narrower driving lanes). It gives more space for bicyclists and room to pass (assuming you have a break in oncoming bike traffic). Intersection design would be important, but there wouldn't be left turns across the protected bike lane (except from highly trained bus drivers at a couple spots), which eliminates the biggest safety concern.

And such an option would be quite inexpensive. An immediate solution with flexible plastic posts and some signal work could be done for very little money. Once it proves itself, a longer-term planters or curb protected barrier would make this an even more attractive route.

In the immediate term, it would look almost exactly like this picture from 15th Street in Washington D.C. (picture from People for Bikes). Incidentally, this protected bike lane spurred a more than 200% increase in biking on the street in the first year. 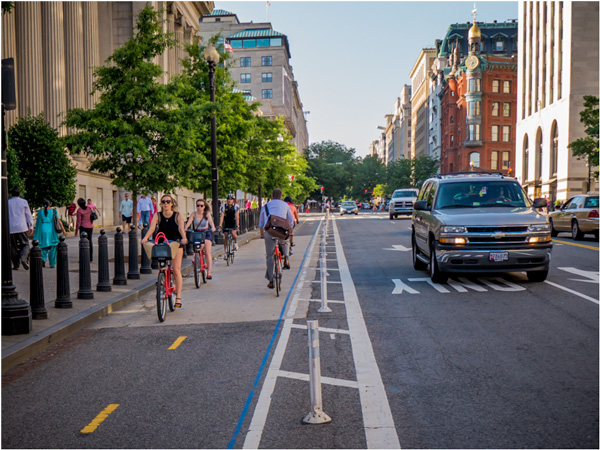 The biggest barrier to a two-way option on 2nd Ave S is afternoon rush hour traffic as it would necessitate removing one lane of traffic. There is little traffic the rest of the day on 2nd Avenue S, but afternoon rush hour is busy and going down to one traffic lane would require traffic patterns to change some to accommodate. We certainly would love to make this work, but City staff haven't seen this as a viable option and apparently at least one big building nearby has previously threatened lawsuit against having only 1 traffic lane on Marquette or 2nd.

Assuming we can't work through traffic issues to make a two-way on 2nd Avenue South work, 3rd Avenue is the only street left that can even reasonably be said to serve the core of downtown fairly well. 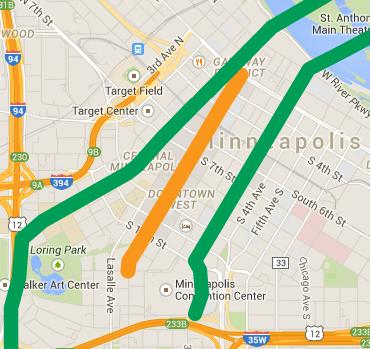 From purely a bike system connectivity/access perspective, 3rd Avenue has pluses and minuses. While Nicollet Mall is closed to bikes, 3rd Ave is a bit farther from the core of downtown than most would prefer. When Nicollet is back open and working ok (if not great) for biking, it does seem that a spacing of 3rd, Nicollet, and Hennepin (in the long-term) would be pretty perfect for getting people comfortably and safely into and through the heart of downtown along the SW-NE diagonal (see map).

3rd Avenue's connectivity to Northeast is great--with the 3rd Avenue bridge and up to University Ave at least an easy future protected bikeway (as in the draft protected bikeway plan). 3rd Avenue's connectivity to the South and Southwest isn't as strong as 2nd Avenue S because it doesn't connect to Grant (which is a great connector to 1st/Nicollet/LaSalle and to the Loring Bikeway). Extending a protected bikeway south of downtown on 3rd would be politically challenging because of parking impacts in areas where parking usage is close to 100%. The City's draft plan does not extend 3rd south of downtown, presumably for that reason.

Of course, we look as protected bikeways as a way not only to greatly increase biking (and all the good things that come with more people biking), but also as a way to add value in other ways through traffic calming, greening, placemaking, etc. This is where it is important that 3rd Avenue be done well. 3rd Avenue currently has green medians on every other block downtown, which certainly are nice. Just tearing out those medians to put in a protected bike lane with flexible plastic posts would fall short of our preferred vision and likely the vision of many other downtown stakeholders.

Here's 3rd Avenue today (the center turn lane is planters every other block and the widths vary slightly block to block):

If we just take out the center turn lane/median and don't move curbs at all, the baseline protected bike lanes would look like this (and look like our Marquette/2nd Avenue rendering above):

If we narrow the lanes to what most other big cities do downtown, we might have space to add planters in the protected bike lane barrier as below.

In real life, it could look pretty close to this from Toronto (via Streetsblog): 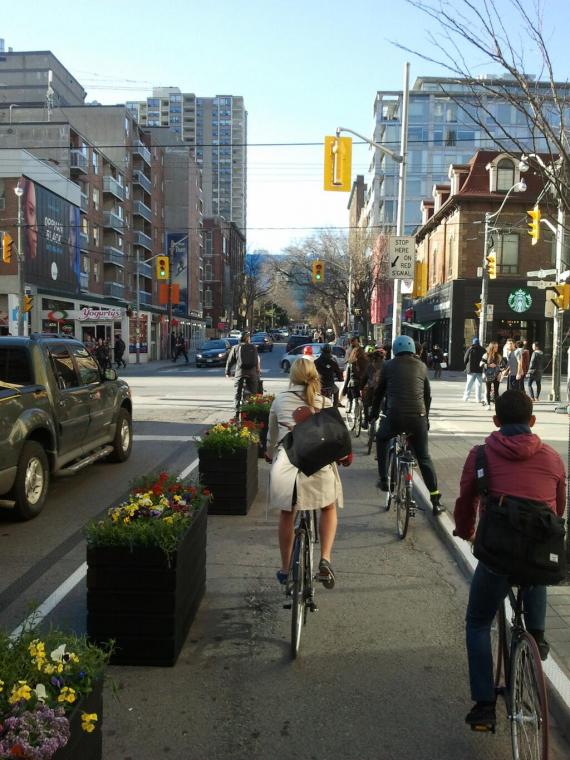 It isn't clear whether the City would deem it feasible to make 3rd Avenue three lanes mid block (with some 4-lane sections). That would make quite a bit of mid-block greening possible in addition to protected bike lanes. On blocks where there are left-turns, the design could look like:

On blocks where there are right turns, it could look like (this is just one option, there are several others; and transitions from block-to-block would be important (and also an opportunity for more greening and pedestrian improvements):

Of course, other options are possible if the curb were moved on one our both sides of the street, but we have not yet seen enough details of costs related to that to explore further here.

What do you think about these choices? What would best serve you and best enhance our city?