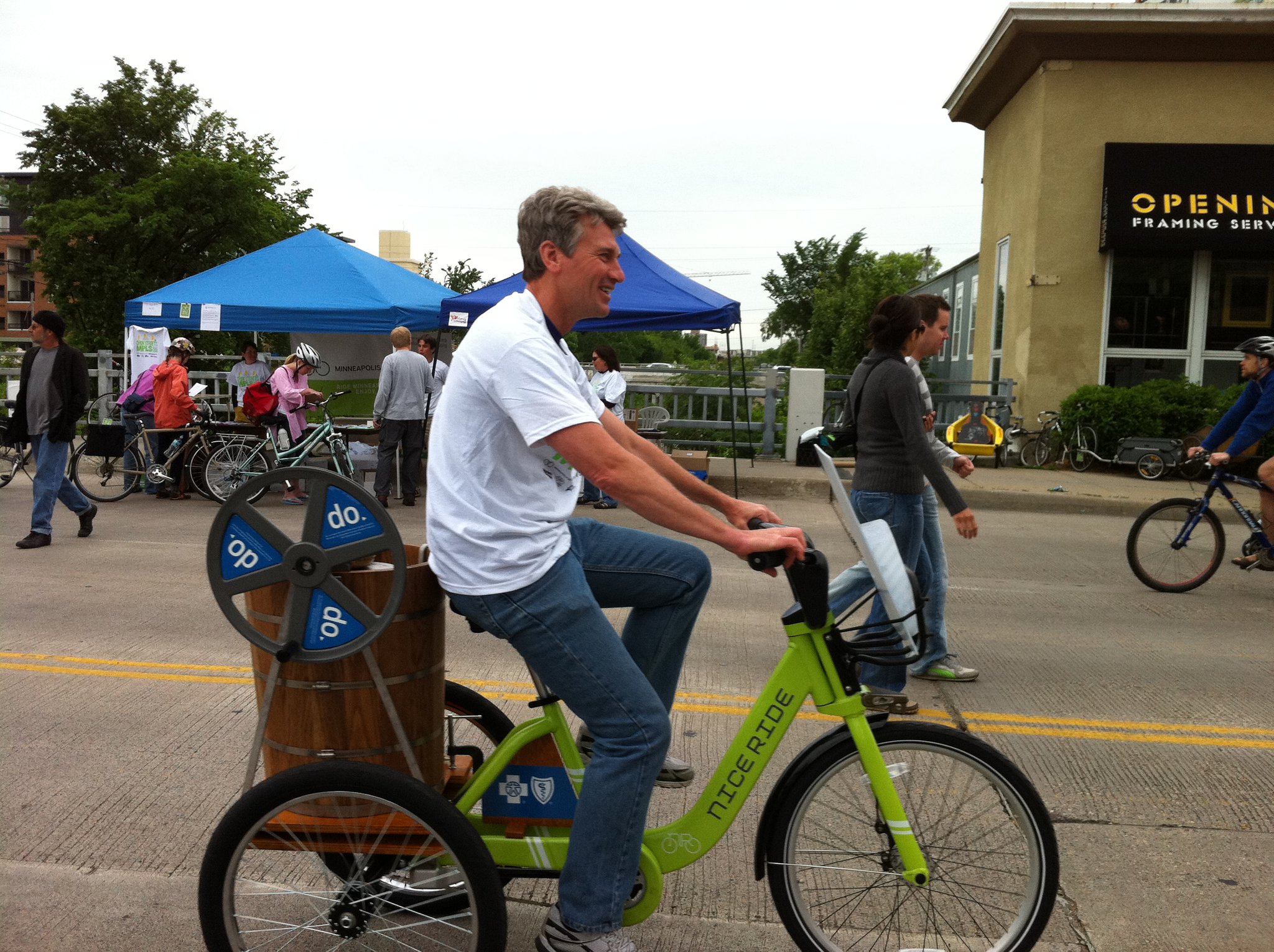 I’ve gone to Open Streets Minneapolis events since the beginning - my favorite memory from the first one was watching then Mayor R.T. Rybak ride the Nice Ride ice cream tricycle down Lyndale Avenue, churning ice cream the whole way! The events have evolved a lot since then, and have become more than just celebrations of our streets. Having gone from a role of event attendee to event planner (part of a great team of folks working on Open Streets), I know that behind the scenes we work hard to make sure they’re inclusive events that reflect the neighborhoods they’re held in, and that the local community feels ownership over the event and is supported in making it their own.

With family in from out of town and my wife expecting our second child any day now, I decided to take the day off of working the event and enjoy it as an attendee again. For the first time since I started working at pulling together these events I got to bike through with my family and experience a day at Open Streets!

Riding out, I took our toddler on our Babboe cargo bike, while my wife and her sister rode their own bikes. We passed a ton of family bikes at the event, and I can’t say enough good things about being able to do the event on a bike where you can strap in a toddler, feed him snacks, and even let him take a nap if need be. We brought along his little scooter because I thought he might enjoy running around and stretching his legs a bit.

Dancing in the streets with traditional Ethiopian dancers near 25th and Franklin #openstreetsmpls pic.twitter.com/RL0RtCyMz8

The first thing that struck me when we arrived at the event was at how well represented the communities along the route were at this event compared to years past. A lot of that is thanks to the hard work of our Open Streets partners who prioritized engagement with East African businesses and the Native American community around Franklin. The American Indian Cultural Corridor at the event really stood out - new this year, it included a number of local Native artists and musicians, as well as businesses and food vendors! 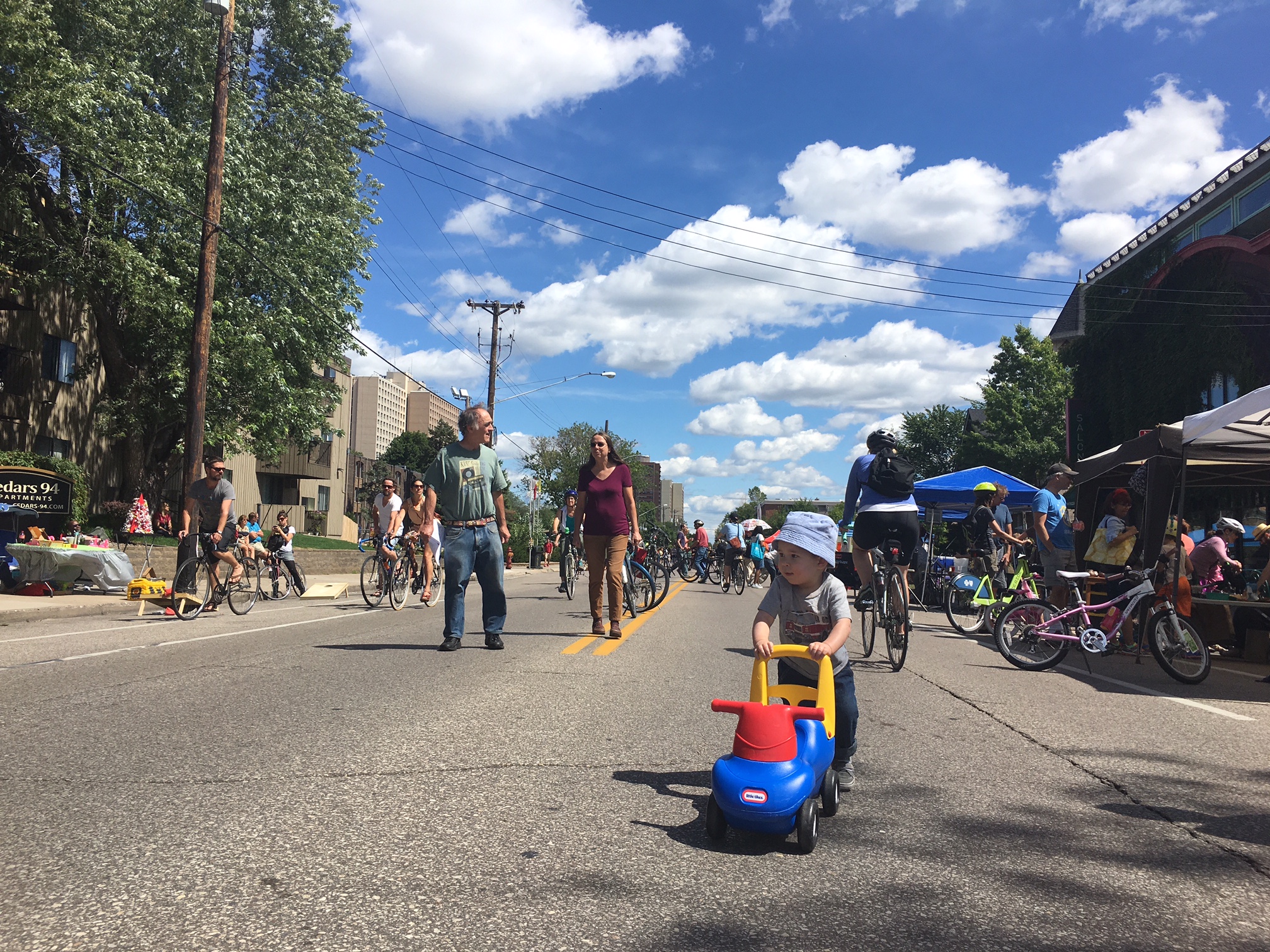 Since we entered on the Seward side near 27th Ave (and he was too small for the bouncy castle), our first stop was the Minnesota Pocket Pets Rescue booth where he got to pet a rat and see some bunnies (who were a bit overwhelmed and hung out in their little house the whole time). We took a break here to give him a chance to run around with his scooter as well. I had been really nervous about bringing it at first, since he has zero concept of danger or other vehicles, however I found that the slow speed and small-scale activation on the street meant that everyone was riding bikes slowly and carefully, watching for pedestrians and erratic toddlers.

Once he exhausted himself, we got back in the bike and continued on towards Hiawatha, where we spent a solid 30 minutes climbing on and around the fire trucks the MFD had out (because toddler). I was a bit disappointed that the MPD did not engage the community in a similar way - seems like a lost opportunity to connect with community members. And I’m not just saying that because my kid would have loved to see some flashing lights!

After a brief pit stop at the Minneapolis Bicycle Coalition tent and Open Streets tents to be annoying and gloat about not working, we rode on past Hiawatha and into the American Indian Cultural Corridor, where we briefly stopped to watch some music and dancing, and for more scooter fun in the street. There was also a diaper change in the grass in the shade, which made me realize we need to do a better job of having options for parents with babies or kids in diapers at these events! 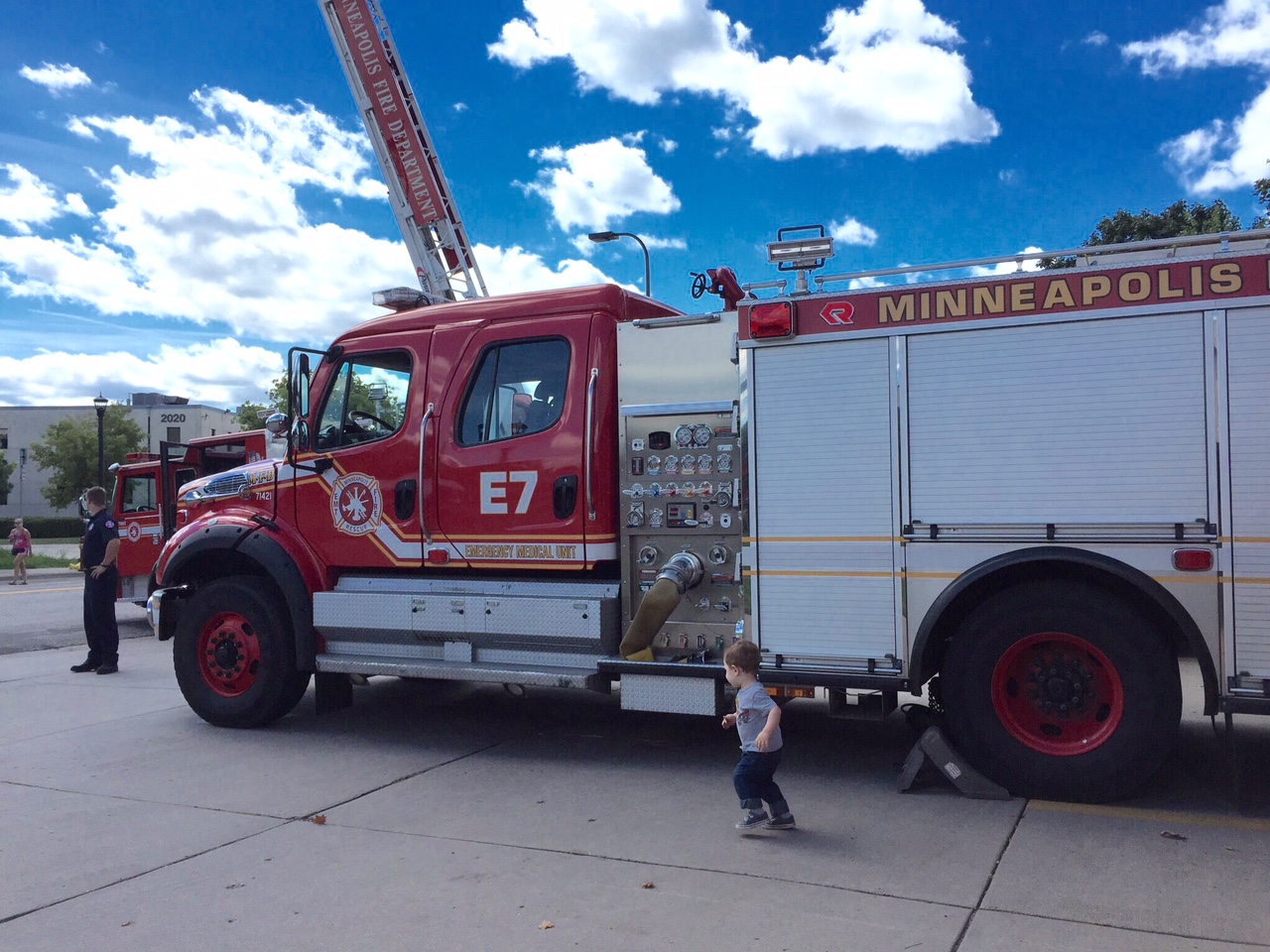 Our final stop was playing with the giant bubbles on the street and drawing with chalk on the ground in the tiny city put up by Project for Pride in Living (PPL) near 11th Ave. We also spent some time running around on and sitting in a Metro Transit bus on the street (because, again, toddler) before heading back to the start and enjoying a nice lunch at the Seward Co-op.

Overall what struck me was that despite our attempt this year at the Minneapolis Bicycle Coalition to pull together a specific “Kids Zone” of kids programming, the opportunity of Open Streets for us visiting as a family was that we were able to create our own kids programming wherever we wanted on the street. We could stop by the Ethiopian dancers and dance along to the music, our toddler could run around the pop-up soccer field on the street and kick a ball around, and we could bring his scooter and toys and have him just run around free in a way that he never could otherwise. There are few places where I as a parent can let my kid just run around and play freely without constant fear of him running into traffic (even on the sidewalk it just takes a second of me not watching him!), and Open Streets really reminded me of how much of my life revolves around making sure he's safe from motor vehicles.

All in all it was a great experience as a family event, and I look forward to working with our team on ways to improve these in the future to make them even better for families with kids!