The second meeting of the Events and Outreach Planning group was held on February 13th, 2013 at Common Roots Café.

The Coalition’s Strategic Plan was discussed, in which the goals of events are defined as: advocacy, getting people on bikes, raising the profile of bike issues, building awareness of and support of the Coalition, building partnerships and networks, and fundraising. 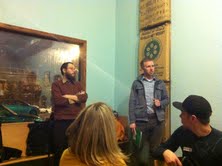 The group was updated on the “Bikeways for Everyone” campaign, which has grown out of the city’s Climate Action Plan. One recommendation of the Climate Action Plan is to build 30 miles of cycletracks by 2020. The Coalition hopes that the recommendation will pass in late April, at which point a plan will be developed for cycletrack locations (commercial corridors and residential streets). There will then be a city/county demonstration project, and funding will need to be determined.

Possible outreach activities surrounding the Bikeways for Everyone campaign include:

-the campaign launch in early May

-candidate forums and bike rides (2013 is a municipal election year) 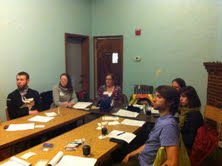 The group then split up into three smaller groups, each addressing different types of events: rides, happy hours, tabling/power stations/etc.

This group focuses on promoting the Coalition through tabling and power stations (strategically located in high bike traffic areas providing refreshments and information about the Coalition).

The meeting wrapped up with a note that although this group will not directly be planning Open Streets, volunteers are still needed and welcome to assist with those events.