The Downtown Bikeways crew volunteered in a couple of different ways on Twin Cities Bike to Work Day on May 17th. One of our members led a Bike to Work ride with Council Member Palmisano from Ward 13 in South Minneapolis. Several other members staffed Bike to Work Day “pit stops” along the Downtown-Whittier corridor during the morning and evening commute. Everybody reported having a lot of fun! At the last Downtown Bikeways work group meeting, we all shared our insights from the event. 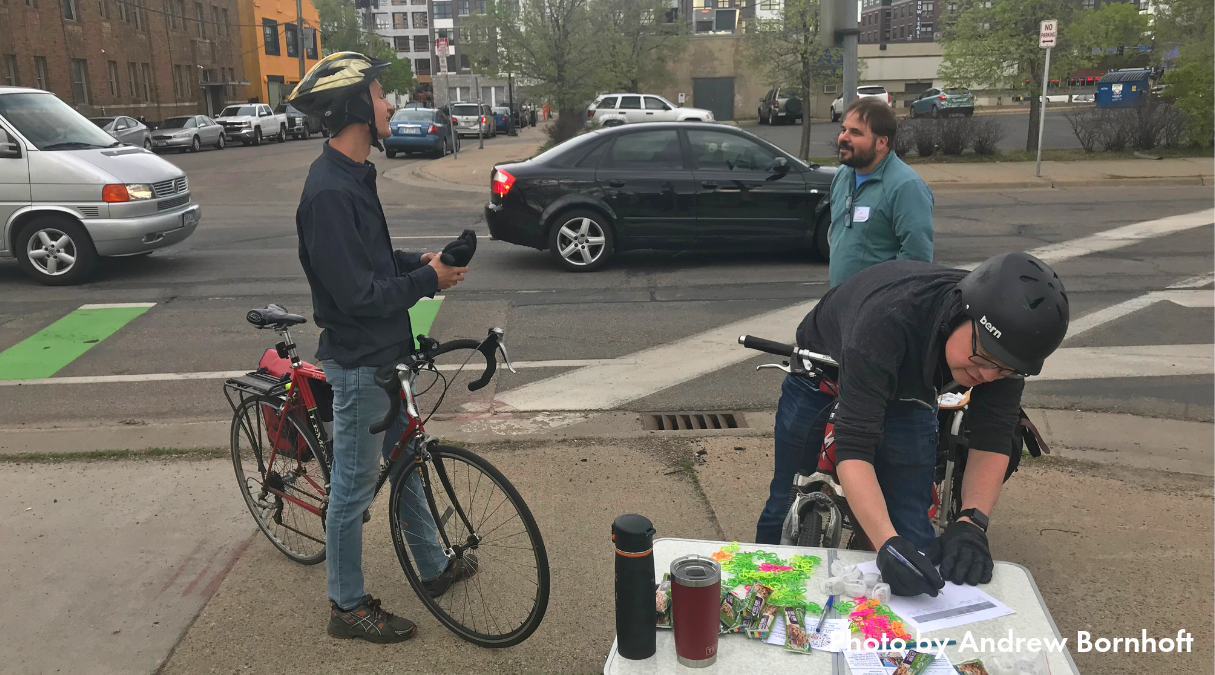 The folks that hosted the pit stop in the morning on 1st Ave estimated that they saw about 100 people commuting to Downtown while they were handing out breakfast bars and other goodies. The morning pit stop crew said that most of the people that stopped at their table were unaware that it was Bike to Work Day, and that commuting by bike to Downtown that day from South Minneapolis was not special for them - it is just how they get Downtown most days!

The afternoon pit stop on LaSalle was reportedly a bit quieter than the morning had been, but that crew had a bunch of informative conversations with commuters. The afternoon pit stop crew found unanimous support in creating a protected bikeway between Downtown and Whittier, with most folks wanting protected bikeways on both 1st and LaSalle-Blaisdell.

The ride in from Southwest Minneapolis had to take a different route than normal because of the Southwest Light Rail construction. Our ride organizer stated that the lack of a protected bikeway from the Midtown Greenway to Downtown was concerning because he was responsible for the safety of some cyclists that don’t normally ride in city traffic. Hopefully this won’t be a concern for future Bike to Work Days! One of the riders asked the organizer to lead another Bike to Work ride the following week because she wasn’t sure that she could follow the same route in the future on her own. For our volunteer, leading this group ride to downtown really reinforced to him the need for a well-connected protected bikeway network with good wayfinding in Minneapolis!

We hope you had a fun Bike to Work Day, and that you’ve kept on biking! If you’d like to volunteer with the Downtown Bikeways Work Group, please join us at our next meeting! We meet monthly, on the first Monday of the month, at the Dunn Brothers across from Loring park at 329 W 15th St from 6:00-7:30 pm. Please show up at 5:45 for a quick pre-meeting orientation chat if you’re new.