Details of Park and Portland Improvements

We've been working on Park and Portland for most of the year, and many good improvements have been put in place over the last month with more still to come. Make sure to join us Monday, November 5 at 8am at Peavy Park to celebrate the improvements!

Thanks to Commissioner Peter McLaughlin and Council Members Robert Lilligren, Elizabeth Glidden, and John Quincy who provided great leadership on these improvements. Also thanks to our partners at Hope Community, Midtown Greenway Coalition, and Sierra Club North Star Chapter who also advocated for improvements as well as the many people who voiced their support at some point.

Here are some of the details of what's in place and coming on Park and Portland. They are big improvements for biking, but also for people walking and the local residents and neighborhoods. Wow are they better streets today than a month ago!

1. There a total of 5.5 miles of new buffered bike lanes! We hope these buffered lanes make for a much more pleseant riding experience. As in this picture, there will be hatch marks every 50 feet or so in the buffers to help limit the number of drivers who see the buffer and bike lane as another driving lane (they are still to come on Portland Ave). The City and County (and us bikers!) will be monitoring how effective the hatches are and may put in more if needed.

2. The speed limit is now 30 mph! There will be monitoring on how speeding is after the changes, but it is clear that the average speed has come down considerably from the 40+ mph average before the changes. 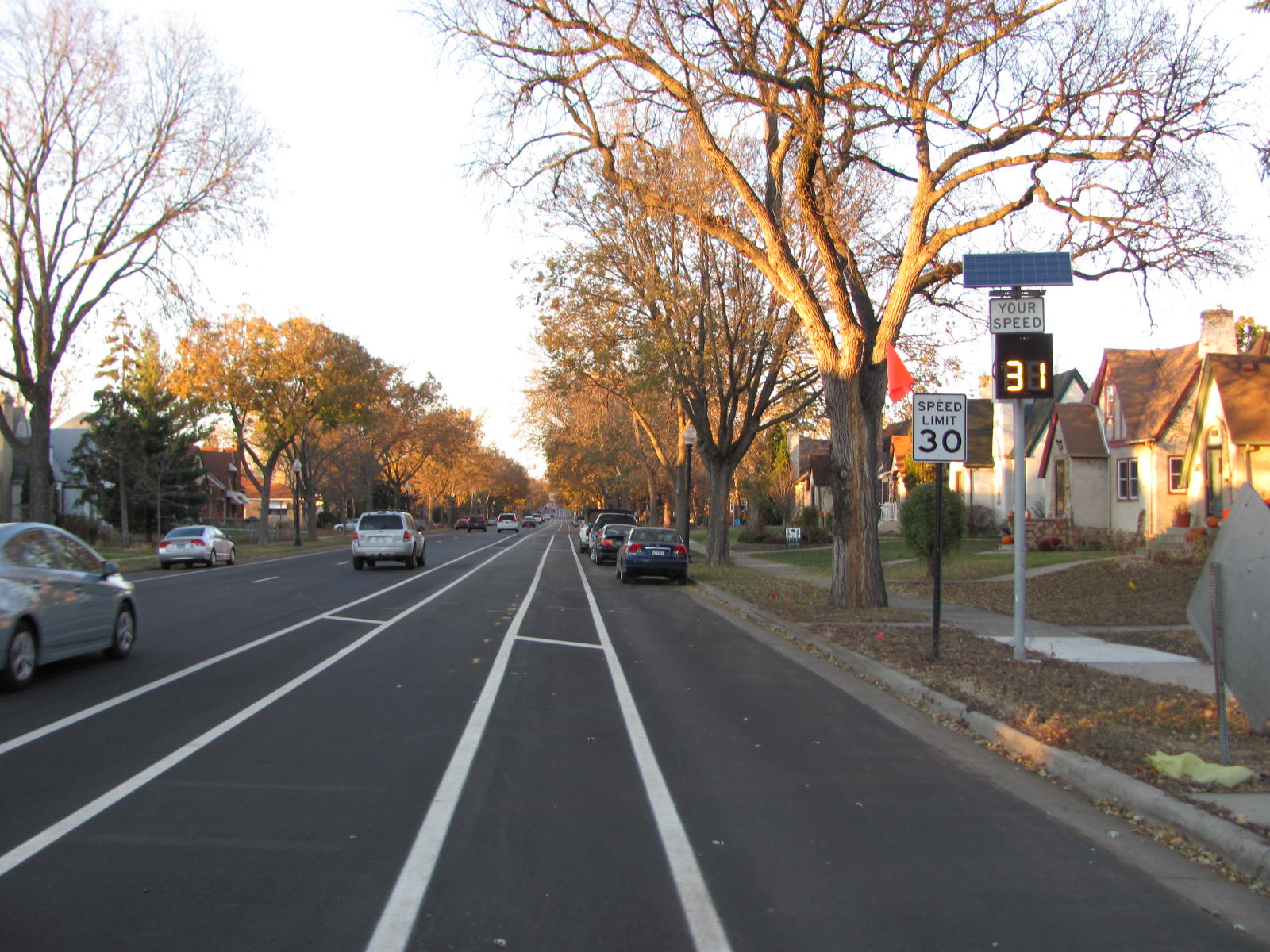 3. The bike lane has been moved to the right throughout. That allows for seemless transitions at Washington Avenue and 46th Street (both of which were problematic before). 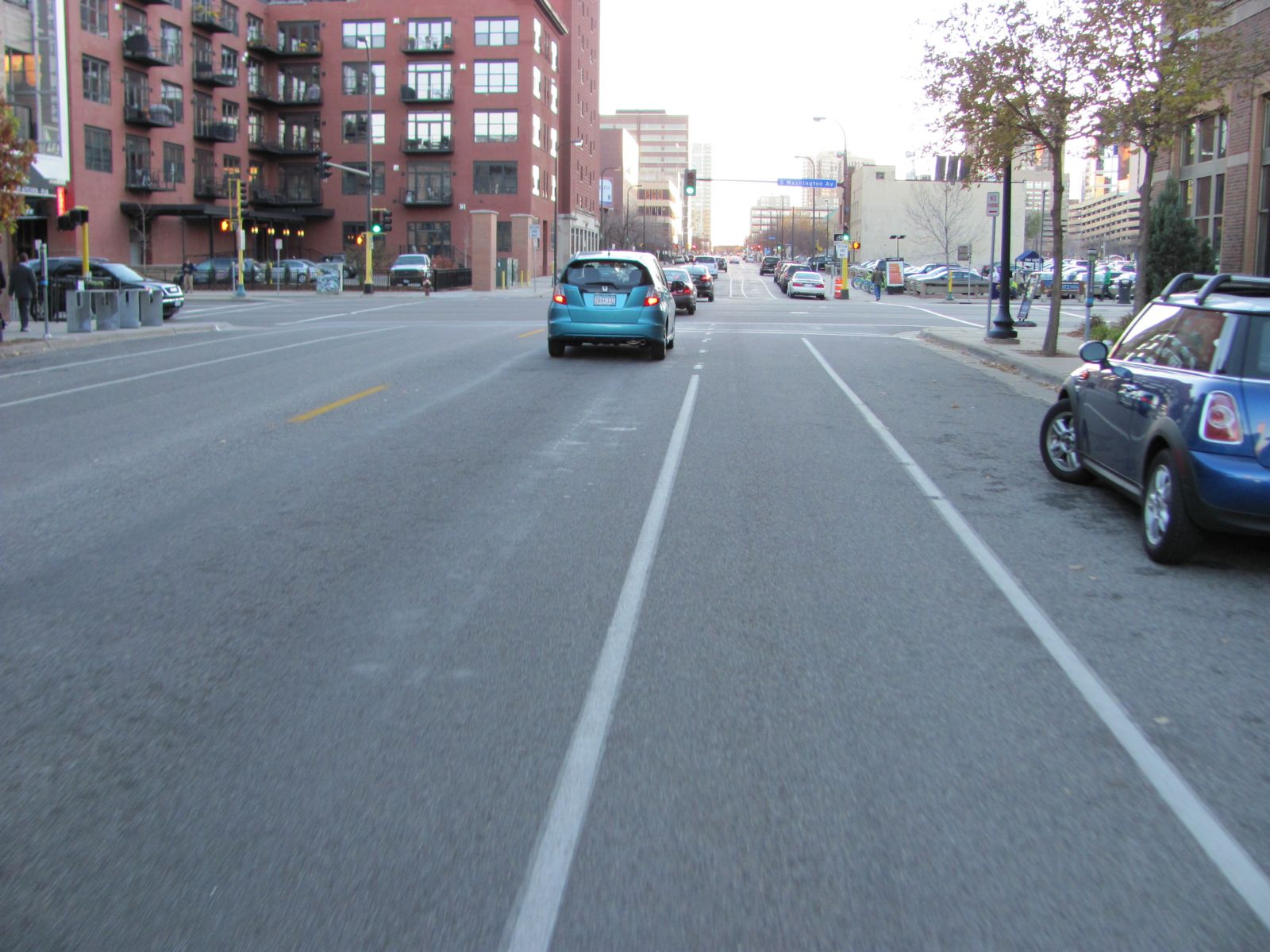 4. There will be a stop light coming next year on Park at the Midtown Greenway. This will allow for comfortable crossing from the right sided bike lane to the Greenway ramp on the left side. This picture is what the crossing looks like now. 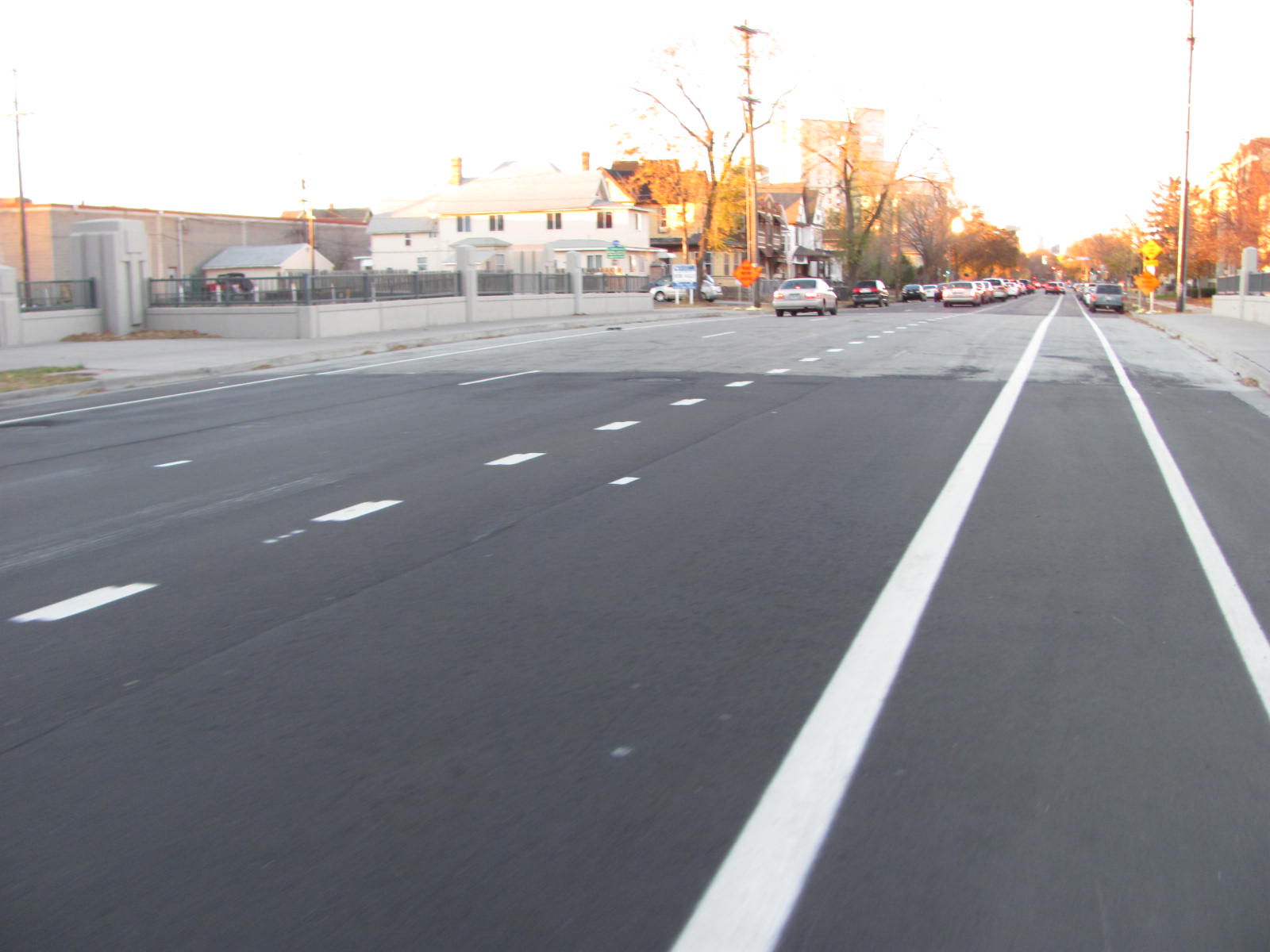 5. The design for right-turning cars through the bike lane is much improved and green paint will be added next year to some "conflict zones" to improve bicycle awareness for right-turning drivers. This picture is Portland at 26th Street. 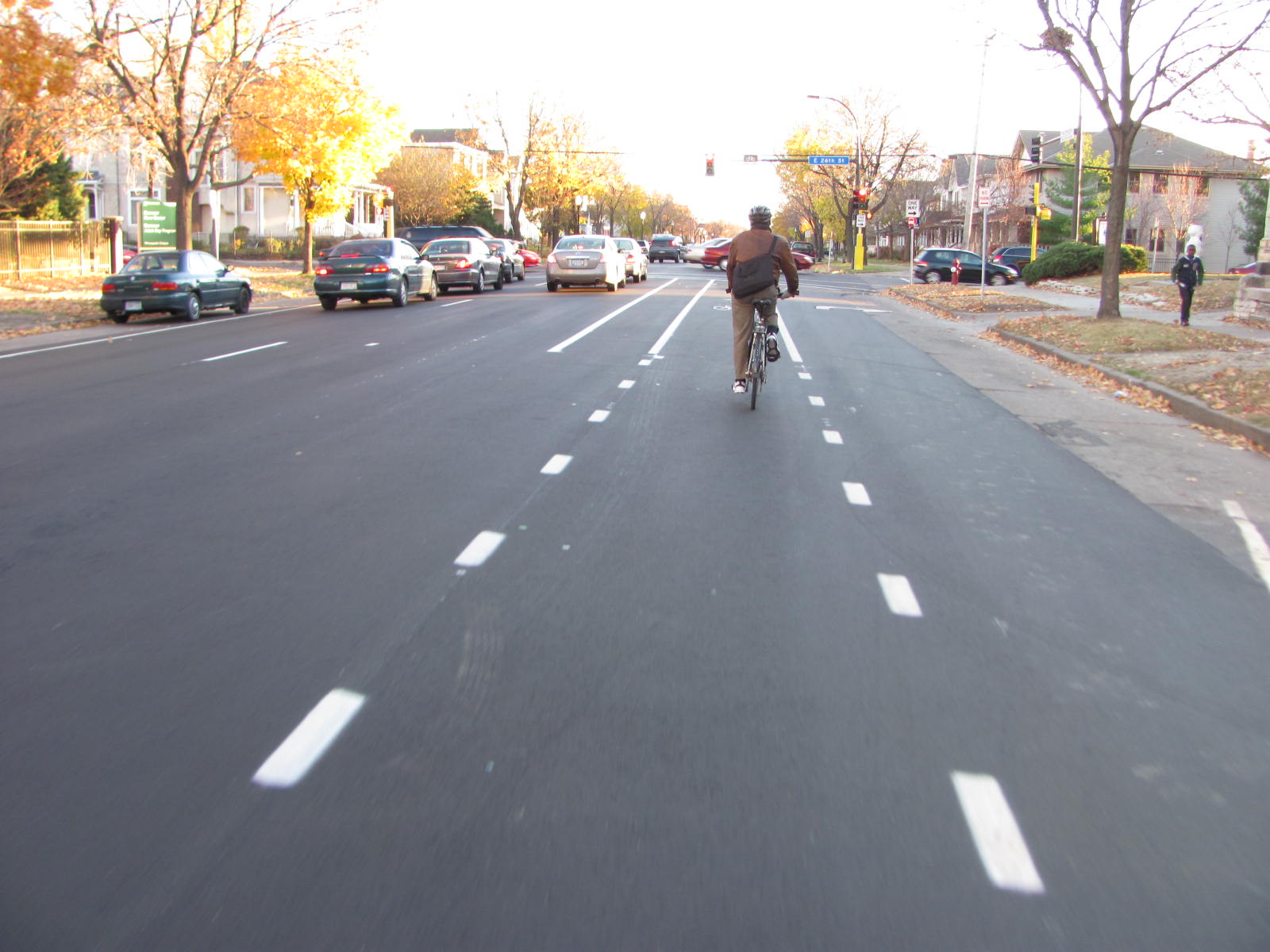 They are also carrying bicycling markings through some intersections to raise visibility (this will also have green paint next year). This is at Portland and 19th where there are lots of right-turning cars. 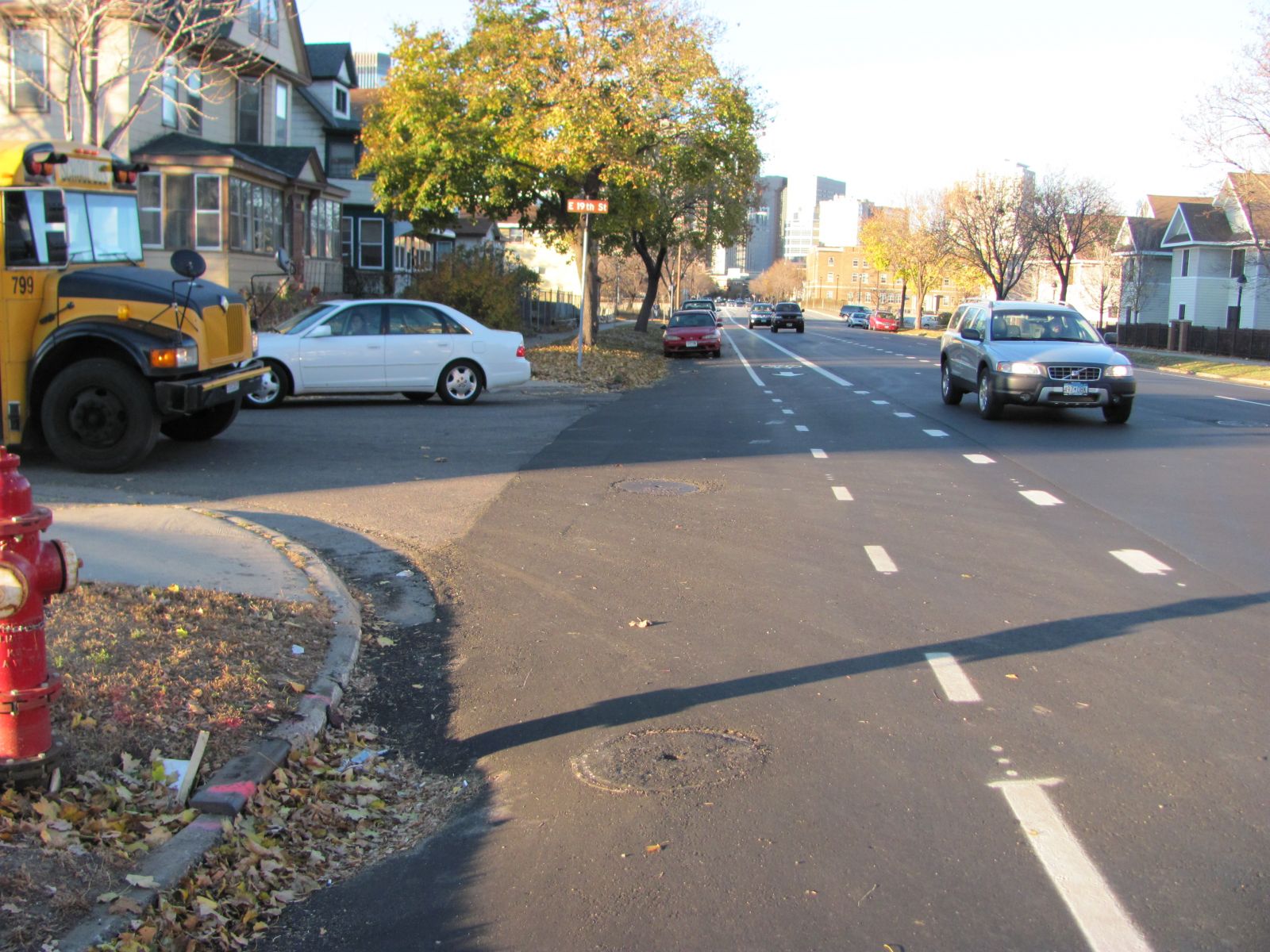 6. Hennepin County has also extended the bike lane on Portland Avenue down to 60th Street. We hope that this will soon connect to bike lanes in Richfield, creating a great connection to neighboring cities.


The Areas we Hope for Future Improvement

1. We still hope for future discussions about turning these into "green corridors" that connect the Stone Arch Bridge to the Midtown Greenway to Minnehaha Creek. You can learn more about that idea in the second part of this previous post.

2. The bike lanes are still pretty intimidating for most people where there are not buffers from 31st to 28th Streets and in downtown. There is little doubt that these high-stress zones will keep some potential riders from giving Park and Portland a try. We hope in the future, we can make these areas more comfortable for riding. This picture shows Park at 28th Street where cars turning right across the bike lane add concerns about safety and will be off-putting to many potential cyclists. 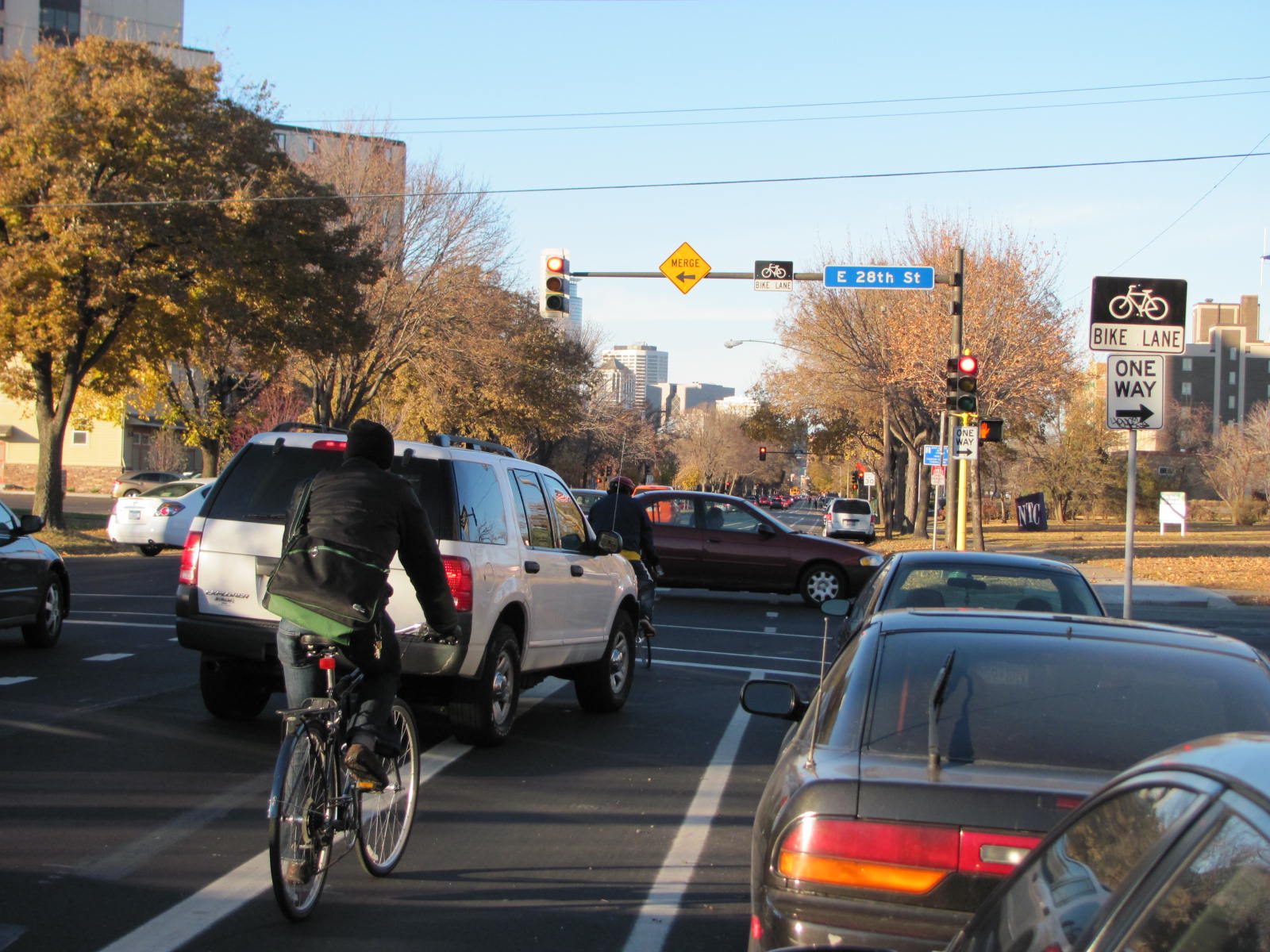 And here is Park Avenue as the nice buffered bike lane transitions into a standard bike lane downtown... 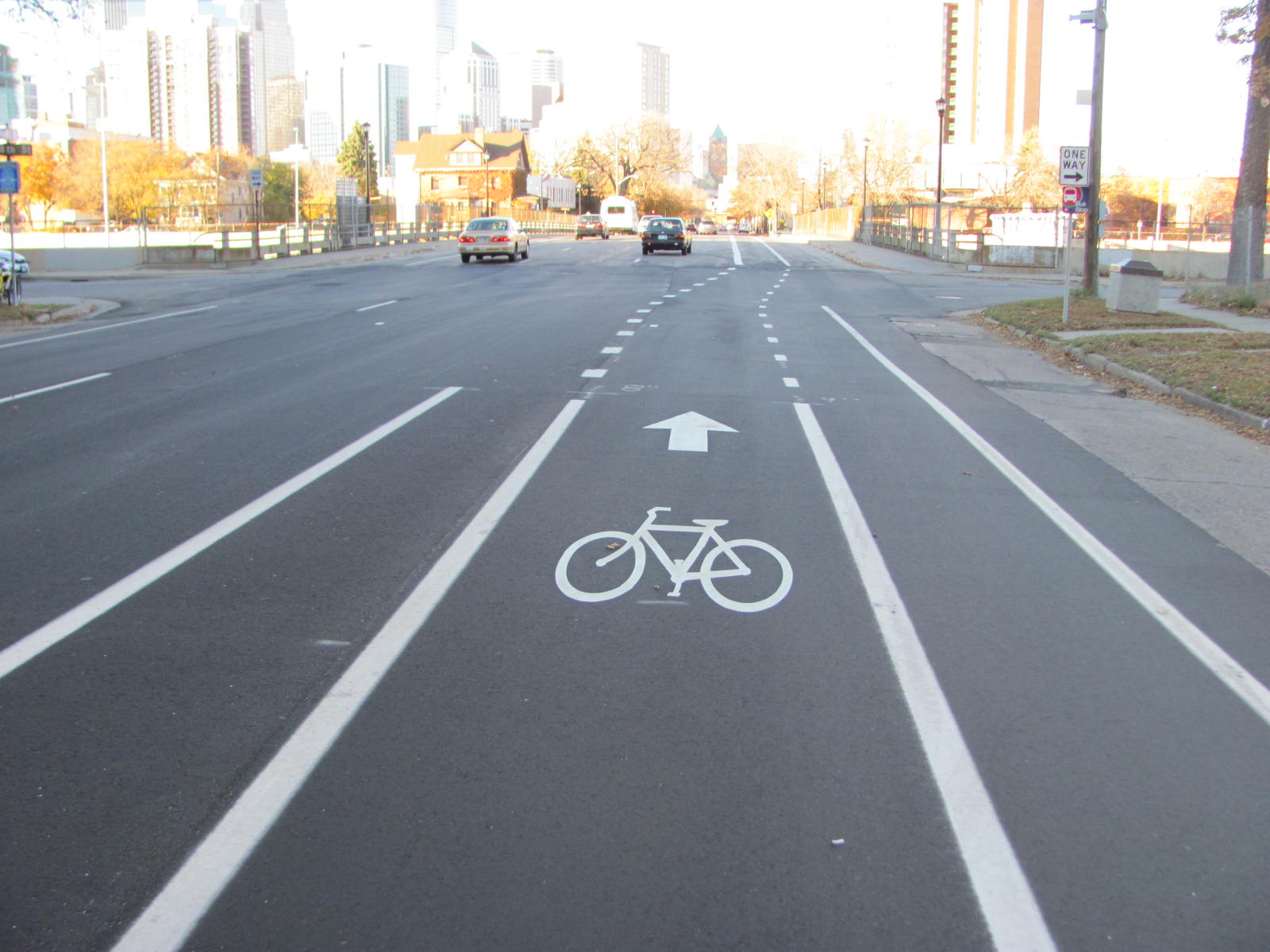 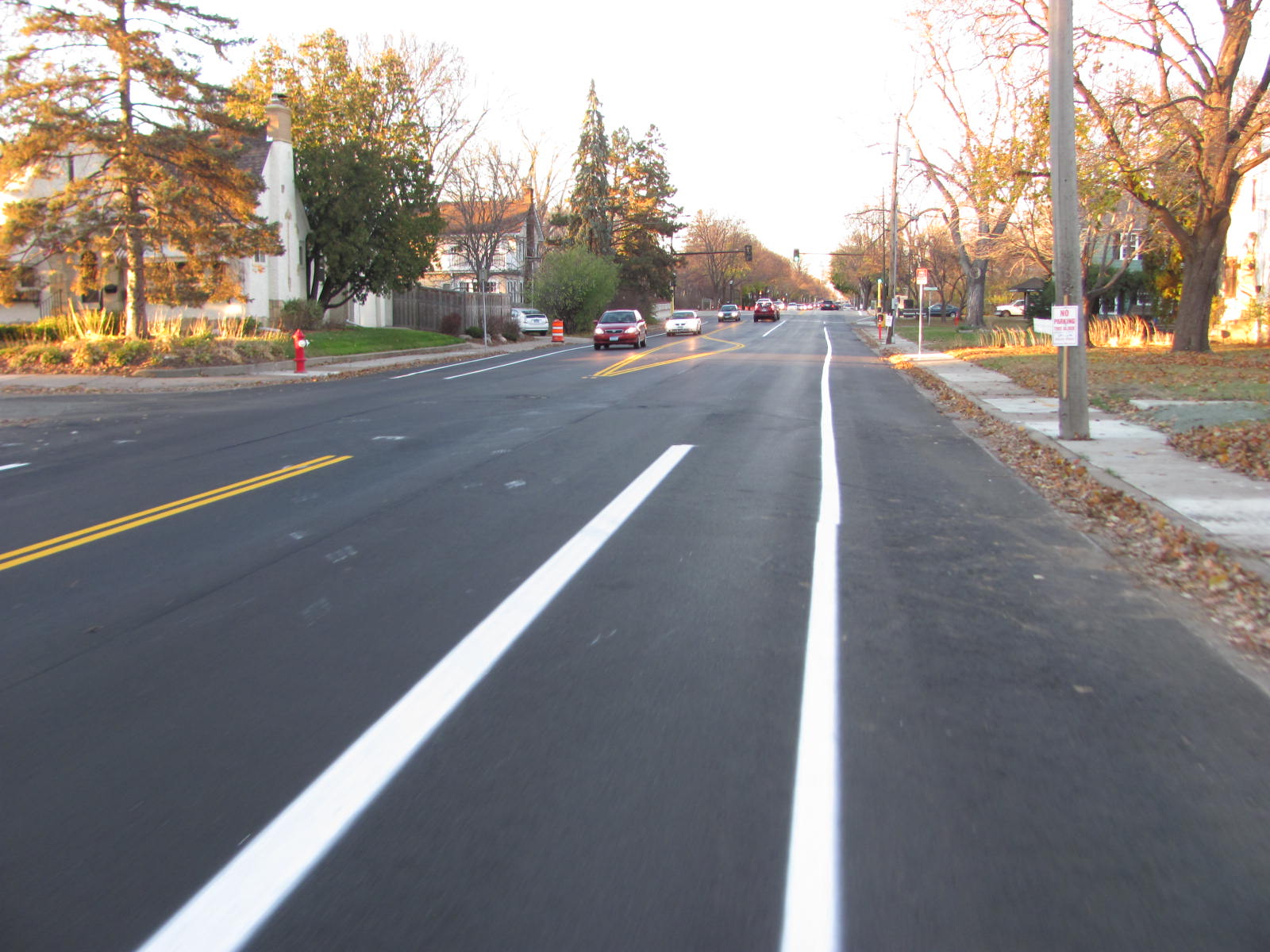 Where the road transitions from 3 lanes with the standard bike lane back to 2 lanes with a buffered bike lane, it seems strange that the design has a final merge right after an intersection. It seems like it would work better to have the 3rd lane end in a right-turn lane at the previous intersection.

Here is that problem on Portland at Franklin Avenue where I've seen quite a bit of strange merging... 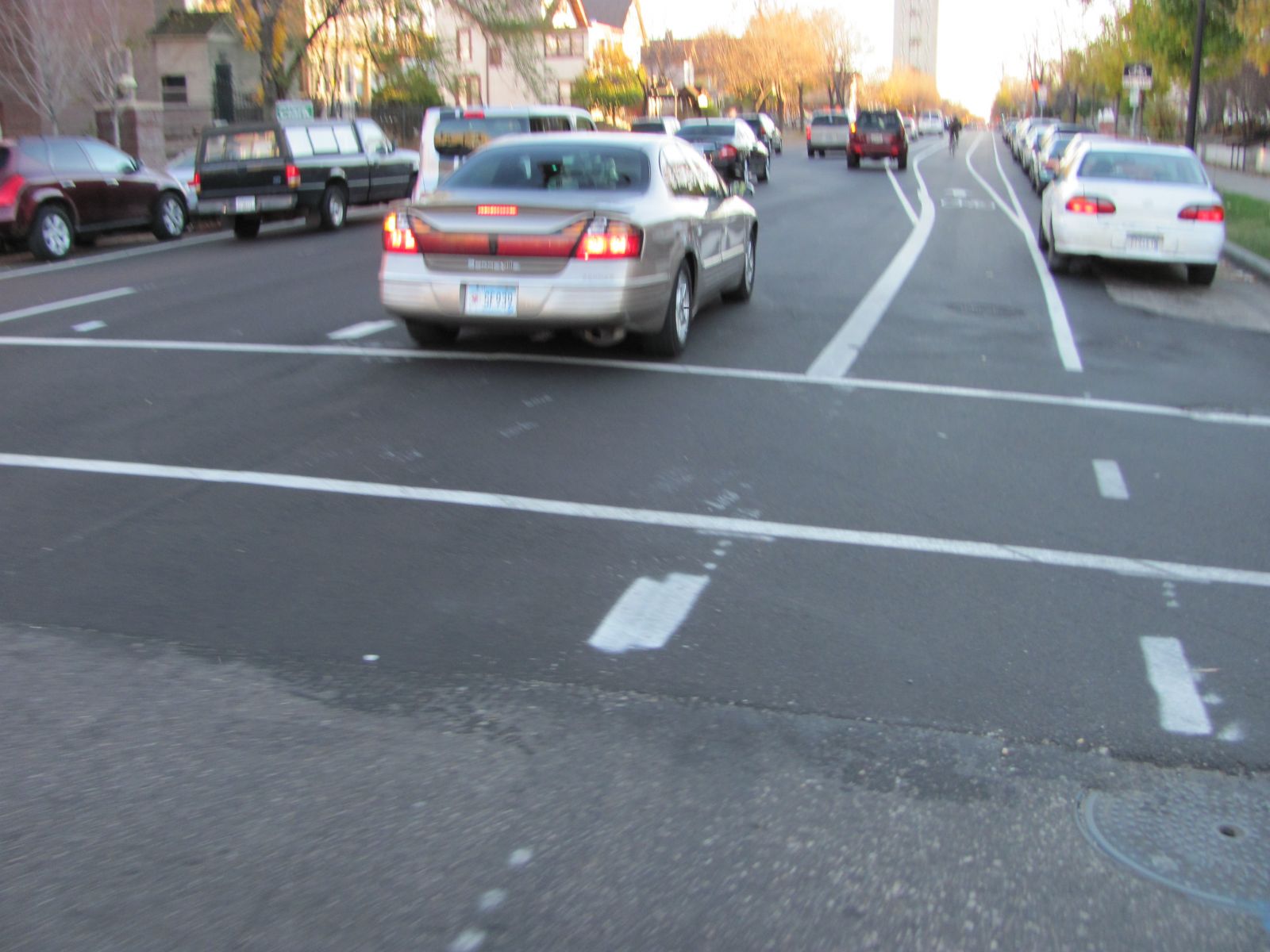 And again on Portland at 31st Street where I almost saw two crashes just as I rode through (including that yellow car)... 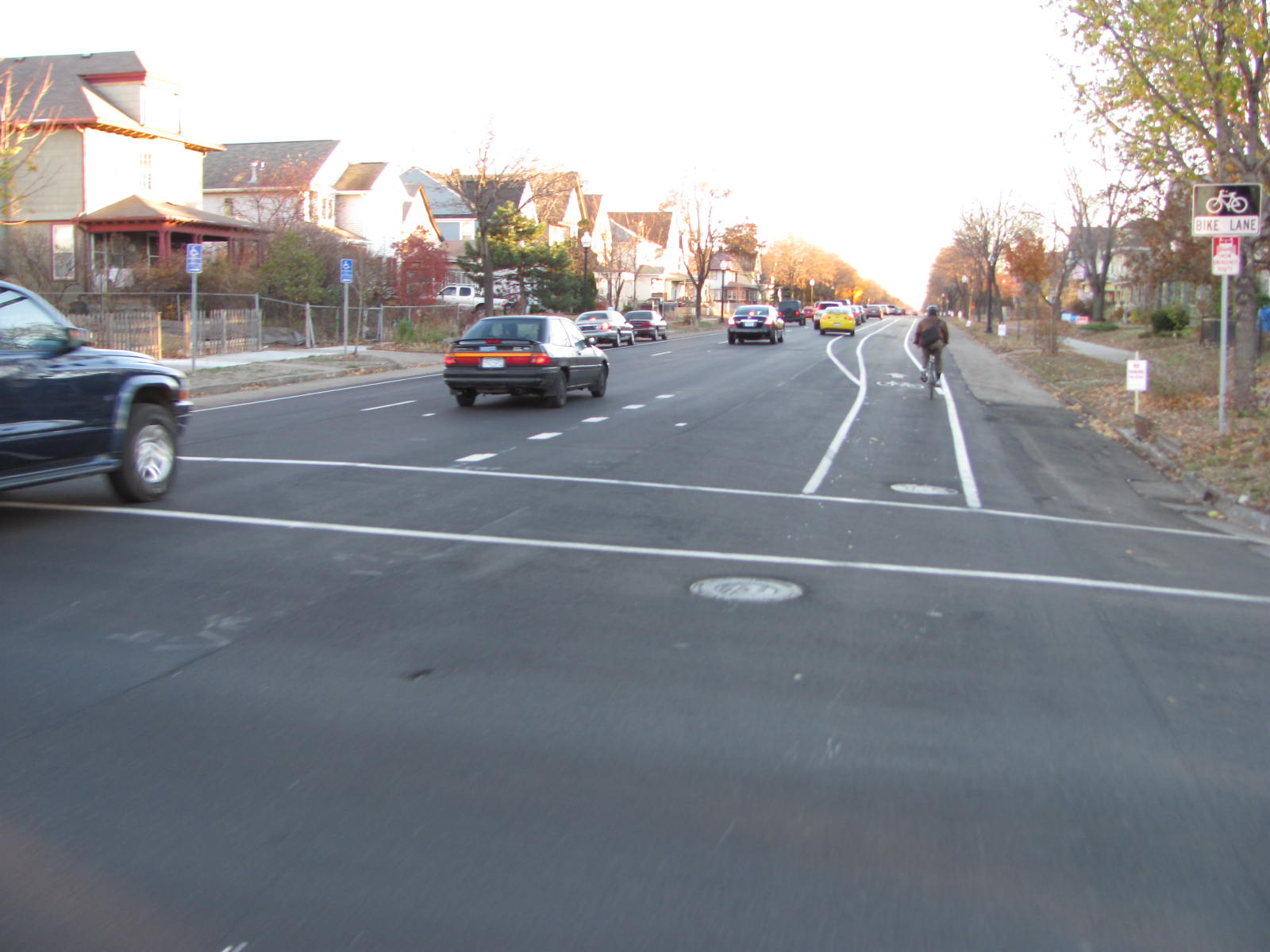 It also seems strange to me that they didn't include a left-turn lane for cars on Park at Franklin Avenue. There is a righ-turn lane there even though there really aren't that many right turners, but the lack of a left-turn lane means that traffic backs up quite a bit there during the afternoon rush hour when traffic on Franklin is kind of a mess. I think a left-turn lane would really eliminate any of that traffic--and hopefully most of the potentially annoyed drivers.

Overall, it's great that I can now ride with my wife on Park and Portland where she wouldn't before!