Minneapolis City Council members have made strong statements that indicate their support for disbanding MPD. Many more community members are having conversations around a new model of community safety--one that is based on healing, harm reduction and restorative justice, instead of depending on armed police. We are excited about these changes and the more just world they will bring about.

Central to these conversations is the role of our transportation system in perpetuating racism. Transportation projects have been used for decades as a tool to terrorize, segregate and disrupt BIPOC (Black, Indigenous, People of Color) communities. 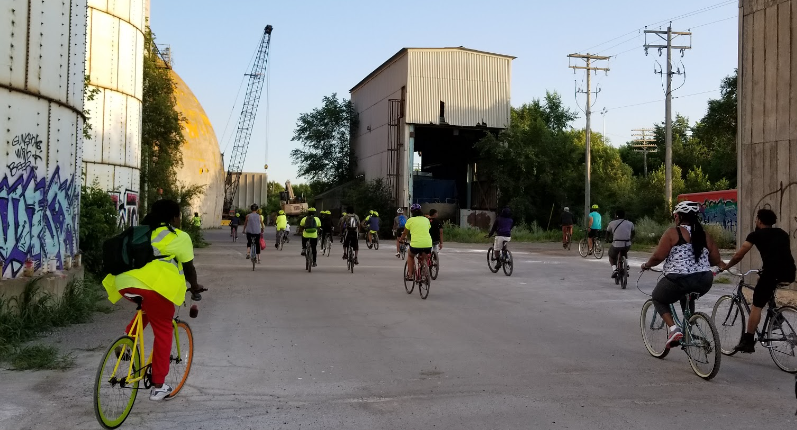 Black people and people of color bike at the Upper Harbor Terminal site in North Minneapolis as part of Slow Roll Minneapolis in partnership with our 2018 Bicycle Connectors program.

Vibrant Black communities like the Rondo Neighborhood in St. Paul were destroyed to make way for inner-city freeways. Throughout Minneapolis highways divide our city creating barriers between BIPOC communities and critical resources. Streets in historically Black and Indigenous communities often serve as conduits for cars to pass through quickly--without regard for the effect this has on people who live there.

BIPOC communities often don’t have good enough walking or biking infrastructure and lack access to high quality public transit. As a result, Black and Native Americans are at the highest risk for being hit by a car in Minneapolis. Folks in Black neighborhoods breathe worse air due to pollution from cars. BIPOC communities see more chronic illnesses like diabetes and cardiovascular disease, in part because no good infrastructure exists to be physically active.

Layered on top of these injustices is the violent reality of policing on our streets. Black and East African drivers are pulled over and searched per capita more than any other group in our city. Undocumented immigrants are often detected and deported through traffic stops. BIPOC bikers have been attacked by police simply for traveling through public spaces. Most recently, George Floyd was killed on our streets.

Enforcement’s disproportionate harm on BIPOC folks is the reason Our Streets Minneapolis has called for removing enforcement as a way to make our streets safer for years. This position was created with leadership from BIPOC staff and volunteers through detailed research, hours of work group meetings, and their own lived experiences. Any conversation about moving away from enforcement as a community must include moving away from enforcement in transportation as well.

The work of countless protesters, organizers and others in our community have brought us to a point where real change is happening. In creating a more inclusive community built around transformative justice, that change must include our streets. At Our Streets Minneapolis, we will continue to work to transform our current top-down model of transportation decision-making. We will continue to work to transition to a model that is community-led and centers BIPOC voices, without relying on traffic law enforcement.

Click here to read our statement on George Floyd, white supremacy, and our work.