If you’re a resident of a nearby neighborhood, like I am—or if you’re one of the thousands who frequent the area’s popular restaurants, bars, and other amenities—then you are likely aware that the Nicollet Island-East Bank neighborhood is no pedestrian paradise. Minneapolitans and visitors alike may flock to the area around the intersection of Hennepin and Central for a whiskey at Whitey’s or lemons at Lund’s, but you can be assured they’re not visiting for the stellar pedestrian infrastructure or safe streets. 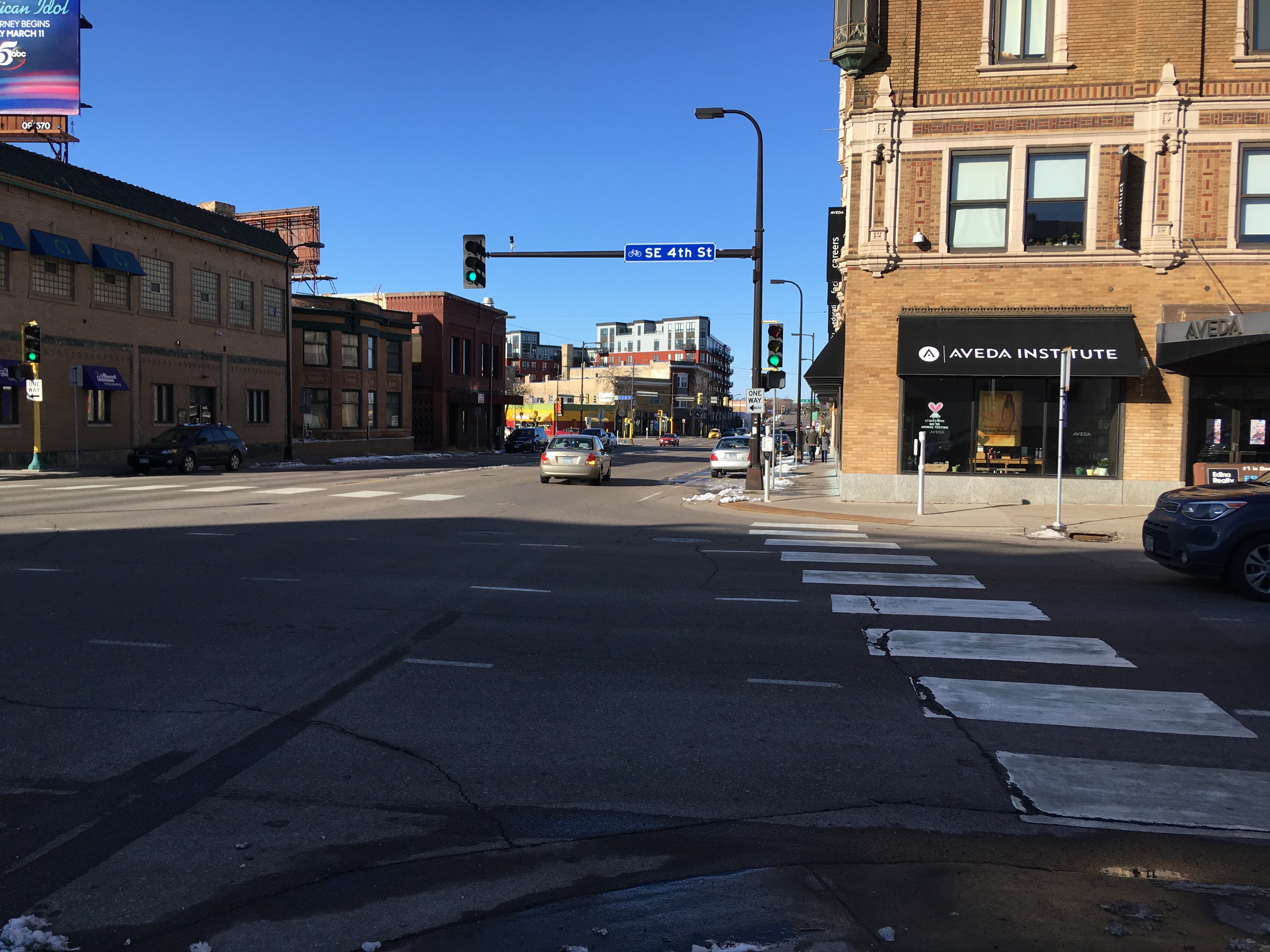 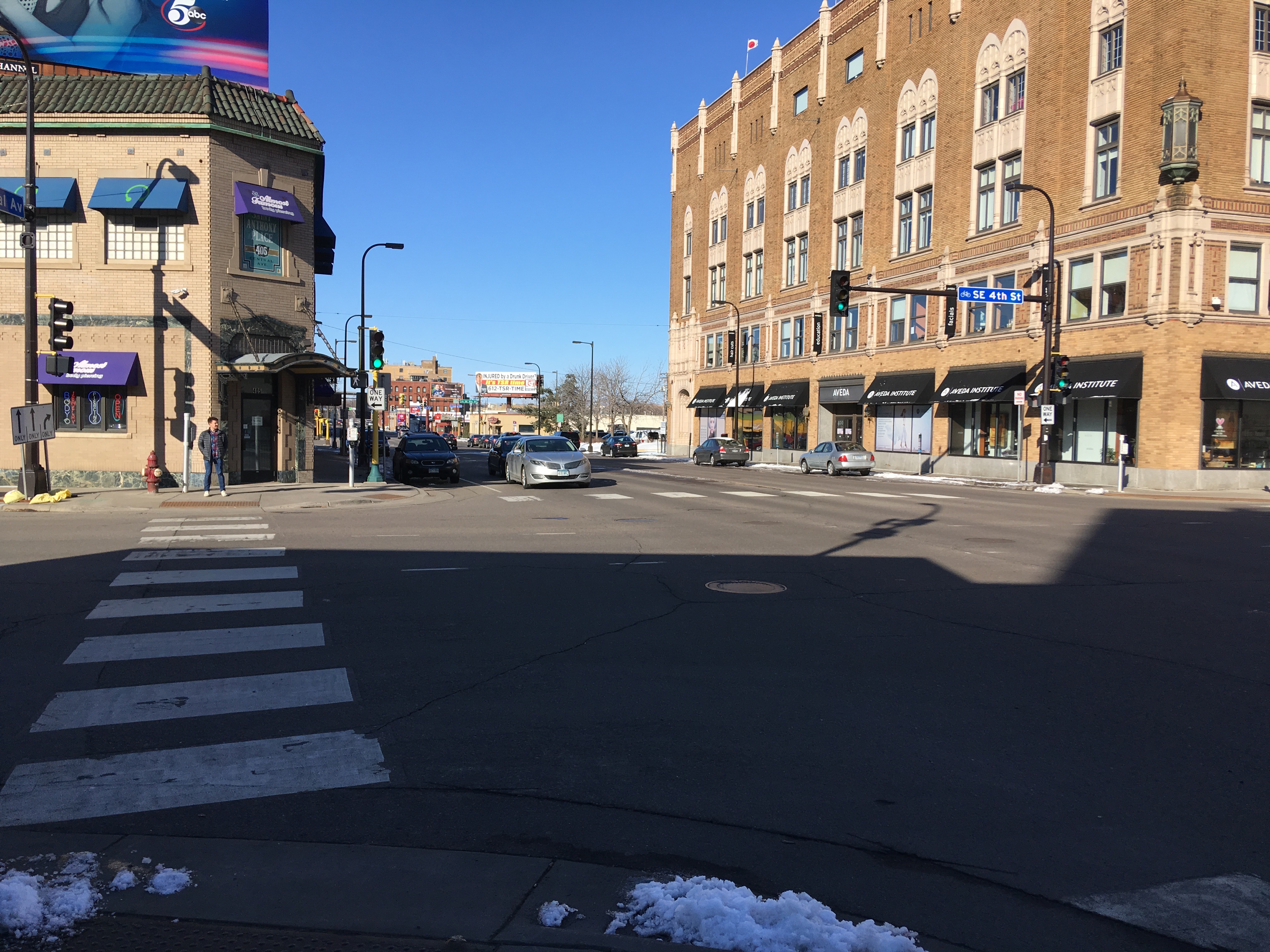 The intersection of 4th St and Central Ave.

Although I’ve only lived in western Marcy-Holmes (just a few blocks from east Hennepin) since last September, my six-plus months have already made me all too aware of the dangers that await pedestrians right nearby. Sadly, it came as no surprise to me that 4th Street SE and Central Avenue SE had the 11th-highest pedestrian crash rate in the entire city of Minneapolis over a recently tabulated 10-year period. While the intersection and its 14 crashes over 10 years may not seem significant, that’s 14 lives forever changed at an intersection with an intimidating entering volume of 28,700 cars per day.

As a part of Our Streets’ most dangerous intersections project, I recently observed the intersection for a period of time—about 30 minutes—and took some pictures to document what I took in. Before my observation period on a chilly Saturday in late March, I already had experienced multiple classic ‘close calls’ with cars at 4th Street and Central. In past months cars have done the classic ‘blind’ left turn on green while rushing to get onto 4th Street (a one-way) and nearly hit me, and my more recent foray sadly replicated these earlier experiences.

Like all too many intersections, 4th and Central is made dangerous by a wide, intersecting array of factors, all of which I noticed during my 30 minutes of walking and watching. To begin, 4th Street SE is a one-way street, while Central is not, and, centrally, (ha, get it?) both streets are wide raceways that encourage drivers to speed and develop tunnel vision on the road. 4th Street is essentially three-plus lanes wide in the blocks leading up to the intersection, while Central is a full two lanes in each direction. Many 4th Street drivers are coming off of I-35 and in my experience both walking/biking/driving are more in a hurry, leading to average speeds well above the limit. 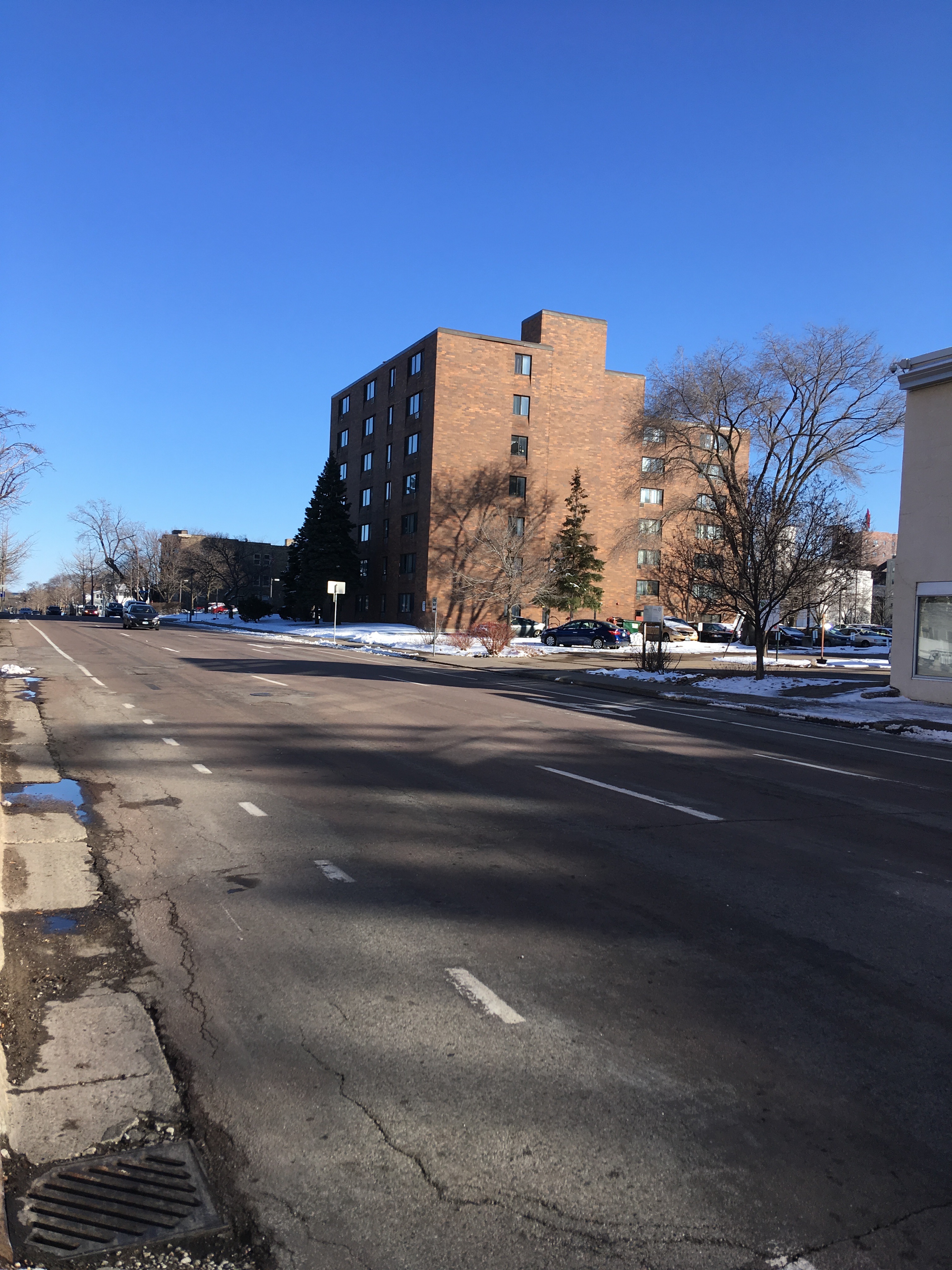 While at the intersection, I also observed multiple dangerous passing maneuvers, where drivers jetted around cautious left-turners, which are never safe for drivers, bicyclists, or peds. From the other directions, Central drivers are coming off the “40-plus” mph Mississippi speed bridge or coming down from what I call the ‘Central Freeway’ section of the street, the seemingly extra-wide and non-pedestrian oriented stretch starting south of the railroad tracks around 14th Avenue NE. I think it’s important to consider both the intersection itself and the built environment plus roads design that leads up to the intersection. Why? This is the paradigm drivers will have in their head when reaching the intersection, and colors their actions accordingly.

And boy oh boy, did drivers have some negative actions! Cars turning left on green onto Central from 4th almost never stayed within the dotted curving lanes, which I saw on multiple occasions almost lead to peds being cut off by the turning cars or being close to hit by them. Impatient drivers seem to have a bad habit of turning right on red onto Central, as I made eye contact with one driver who—although I was ¾ of the way through the intersection—almost didn’t stop at all before attempting to turn right. The same goes for those turning right on red onto 4th from Hennepin, and ‘creeping’ into the crosswalk, which is again dangerous and intimidating to pedestrians. 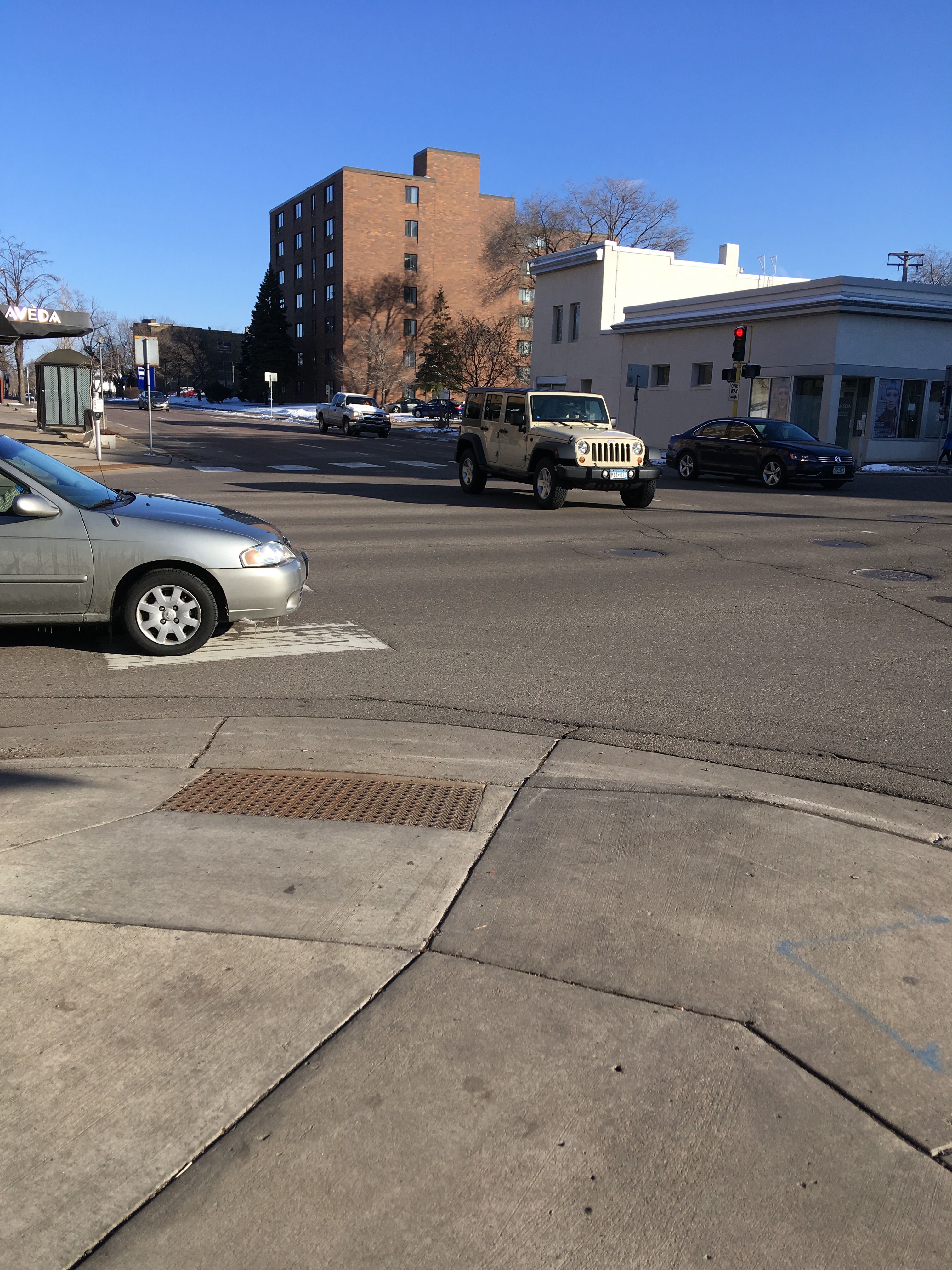 Just say no to ‘crosswalk creeping!’

The most egregious and potentially dangerous parts of this intersection that I both experienced and observed, though is the situation with cars attempting to access the Lund’s & Byerlys parking garage. Both drivers turning left on green off Central northeast-bound and right on red and green off Central southwest-bound make life difficult for the numerous pedestrians also trying to access the grocery store or other nearby destinations. This is where I had almost been hit before my observation period, and while crossing 4th during my observation, a large black Land/Range Rover SUV aggressively turned left onto 4th to access the parking garage, coming close-ish to hitting me. Naturally, I turned around and snapped a pic of the offender. Again, I saw multiple other peds in similar dangerous situations just during my brief 30-minutes at the intersection! 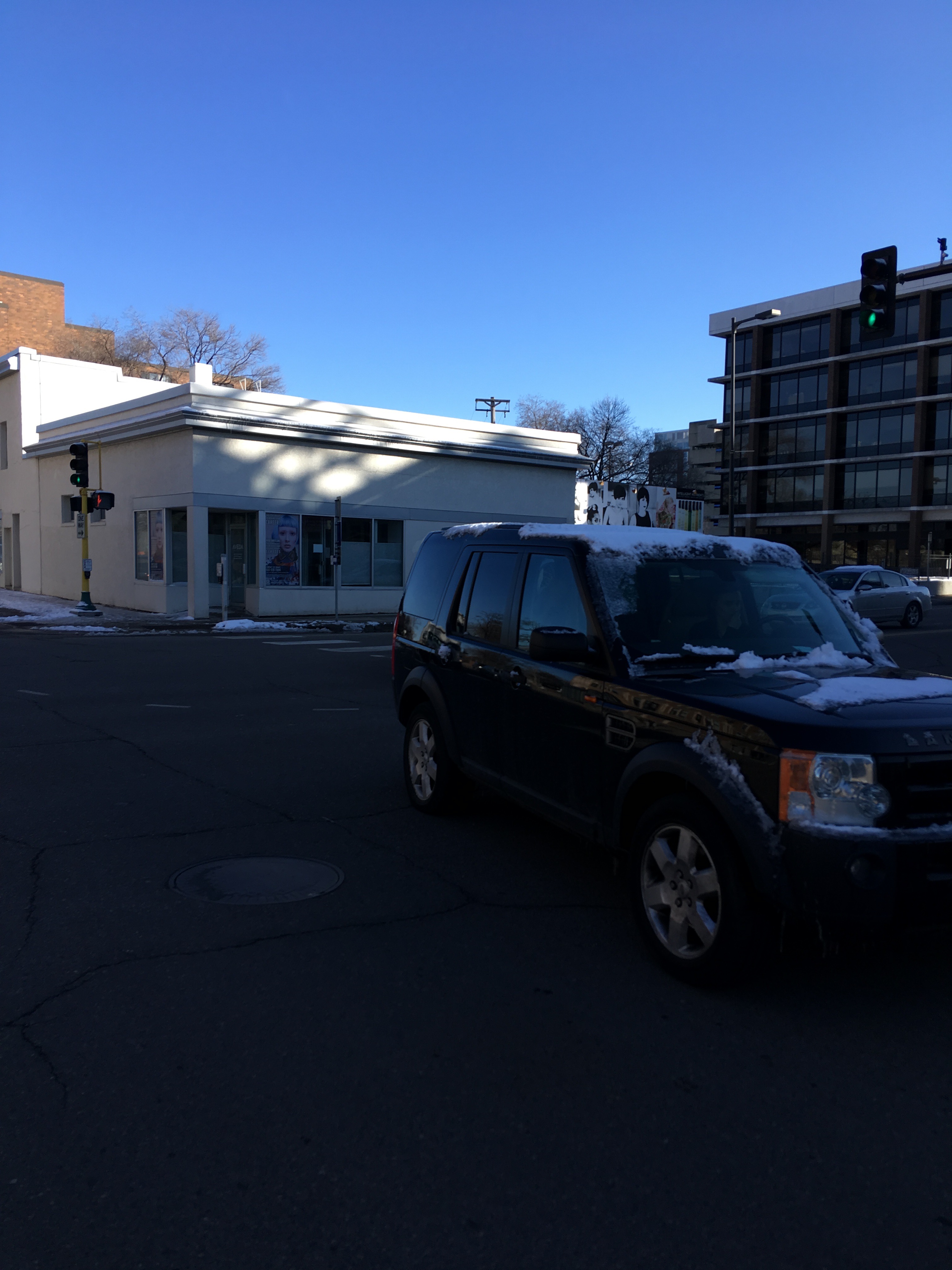 What’s even worse about the sharp, fast turns that cars aiming for the Lund’s garage make is that they often have to stop quickly and form a sidewalk-piercing line of vehicles during peak times. As I observed from 5:15-5:45 on a bustling Saturday, I saw plenty of this in action. Needless to say, inconvenient at best and at worst actively harmful to neighborhood pedestrians. 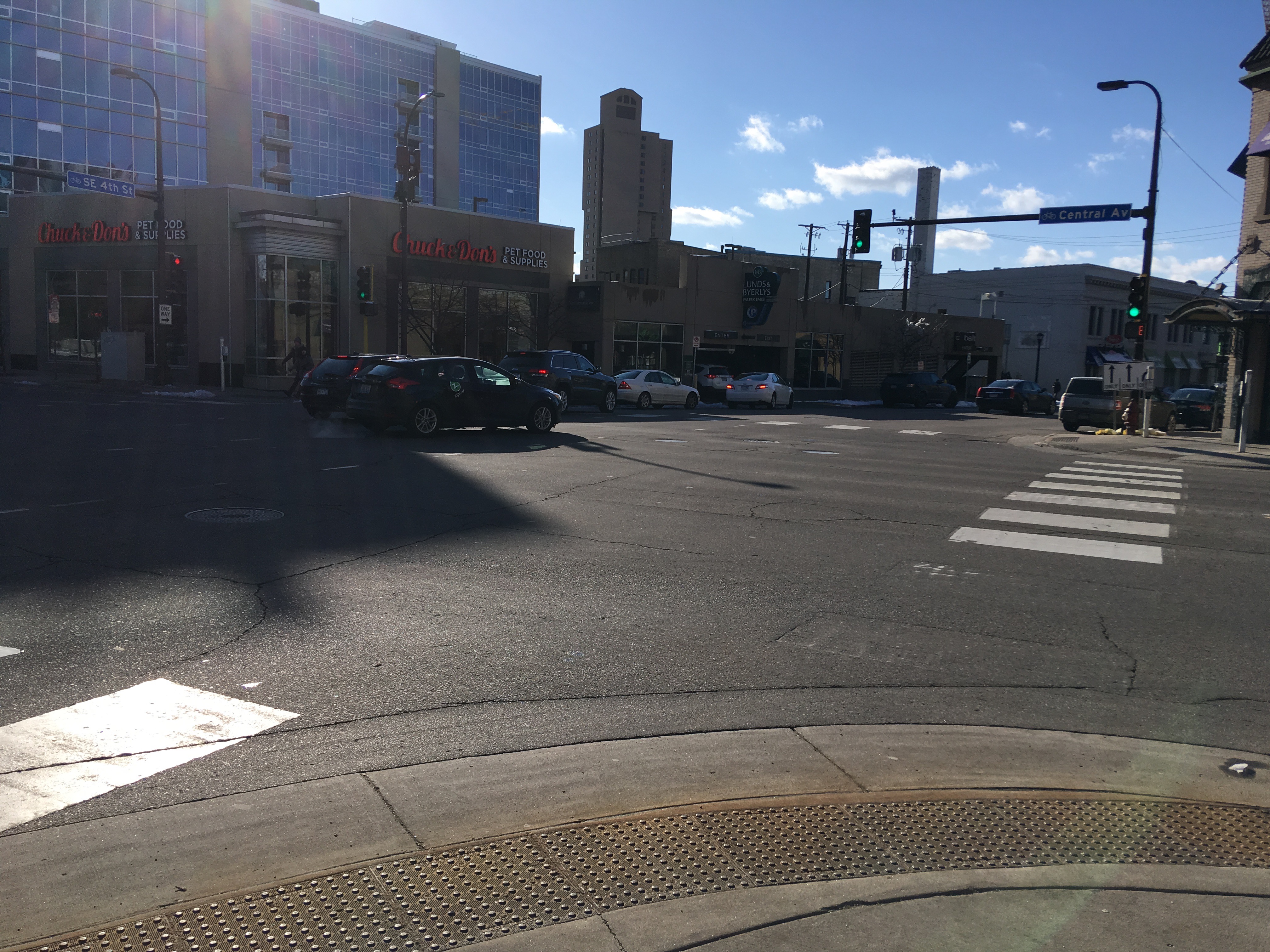 Other potentially perilous aspects of this intersection are the marginal-medium to downright poor condition and visibility of the crosswalk striping. I am aware—and happy—that Minneapolis is making new efforts to re-stripe crosswalks, but the pace of change needs to accelerate across the city for safety to be greatly improved. Although three of the four crosswalks are in pretty decent condition, I can say from experience that even in their current condition, they’re not of as much help in the snow, rain, dark, etc. The fourth crosswalk is in atrocious condition with the middle rectangles completely faded and the edges nearest the curb cut off. These conditions further contribute to safety challenges at the intersection in general. I am of the opinion that even the ‘zebra stripe’ pattern and white paint used by the city is still not effective enough, but alternate crosswalk materials are a story for another day. In the end, my 30 minutes at 4th Street SE and Central Avenue SE featured about 5-6 unsafe moments for peds (experienced and observed) combined, yet thankfully nothing serious. It was a mundane evening at a Minneapolis intersection—yet mundane in our 2018 car-centric context means marginal conditions for sidewalk users, with the occasional close-call. I look forward to creating streets and sidewalks where pleasant experiences and safety are the cultural norm, and not the exception!

All photos taken by Gordy Moore.