The intersection of 3rd Ave and 16th St is a major interchange that users must pass through to access major downtown features. Features such as the convention center, an entrance to I-94, and the Stevens Square neighborhood, present significant challenges to drivers, cyclists, transit users and pedestrians alike in its current configuration. In this post I hope to highlight the ways in which this intersection's setup and operation is dangerous for all users. 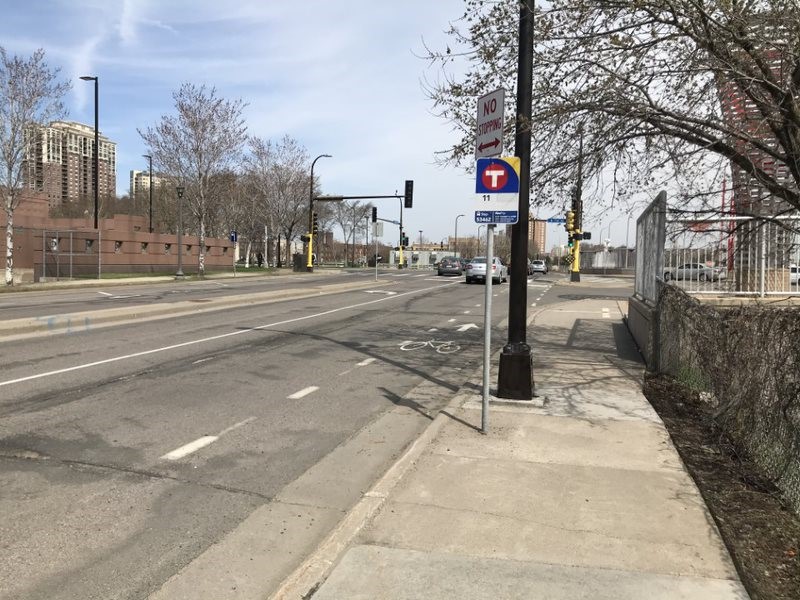 First we have the bus stop. This image is looking East on 16th towards the intersection. As we can see, there are no facilities for people waiting for the bus, no shelter, no bench, not even a trash can. Not ideal for the transit-dependent commuter for whom standing for extended periods is difficult. 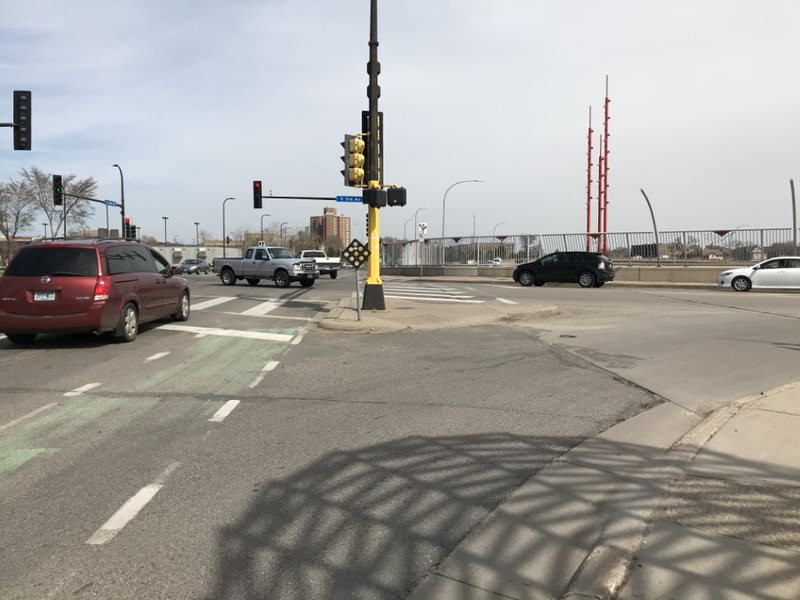 This is 16th Street facing east, a little further up from the bus stop. It has a curb cut for right turning cars, which is helpful for preventing automobile backup. However, note that the bike lane here does not have a green-painted bicycle box. When drivers turning right have to cross the bike lane to make their turn, and there's no box where cyclists can stack up waiting for the light to change, this can cause unnecessary friction between drivers and bikers who are “queuing” to go straight in the bike lane. Finally, the path from the sidewalk to the curb cut island does not have a marked crosswalk or a walk light, meaning that pedestrians have to rely on the goodwill of  right-turning drivers to cross. 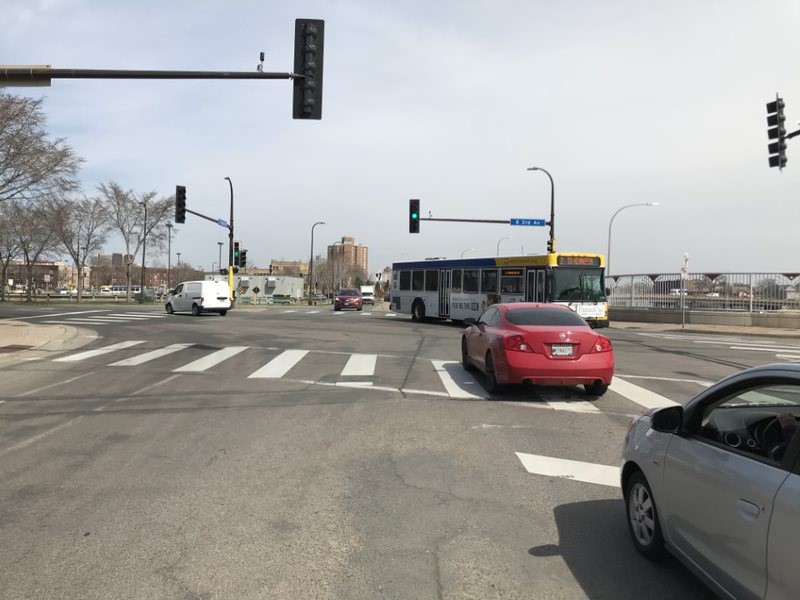 This image gets to the heart of what makes this intersection dangerous and inefficient for all users. This is looking into the intersection toward the east from the center island. As we can see, vehicles turning left from both directions are not provided with a signal, even though the traffic light clearly has the requisite spaces. This leads to a dangerous situation in which drivers heading straight west on 16th choose to go around the cars turning left by passing on the right. The person in the red car in the image faces this dilemma--they likely cannot see around the bus to determine if there is a car coming through that intends to go straight. The driver also does not want to get stranded in the intersection when the light changes, leading to frequent hasty decisions and near misses. This is extra dangerous for cyclists. As we can see in the image showing the bike lane above, there is no means of turning left from it, meaning that cyclists have to move over to the left turn lane they share with cars. 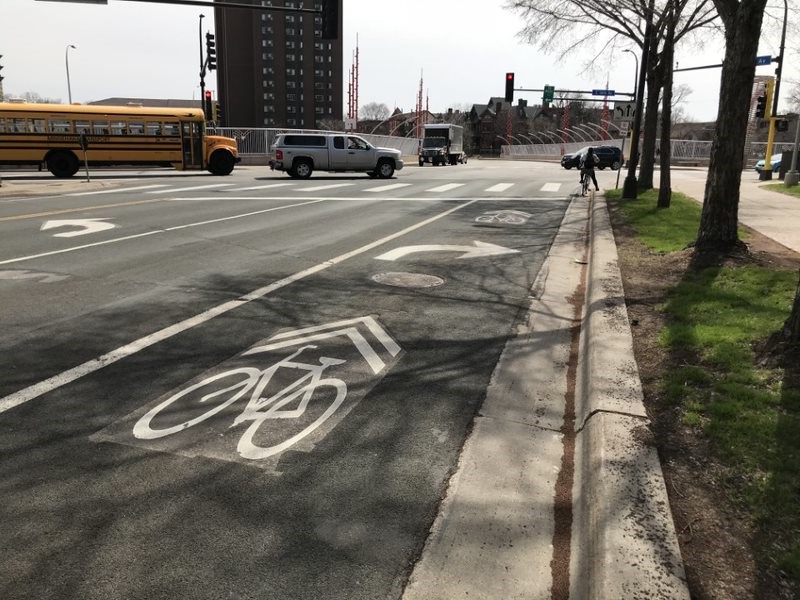 This is looking southbound on 3rd Avenue. The bike lane here is shared with the right-turn lane for cars. All other directions in this intersection have curb cut islands which prevent this scenario, so it's inconsistent and makes for uncomfortable interactions between cars and bikes. Sometimes, because drivers don't always understand or acknowledge the hand signals used to indicate a turn by a cyclist, and not all cyclists use them, there exists a strong potential for dangerous misunderstandings. Curiously, the left turn signals for this part of the intersection are used even though the left turn signals for other directions are not. 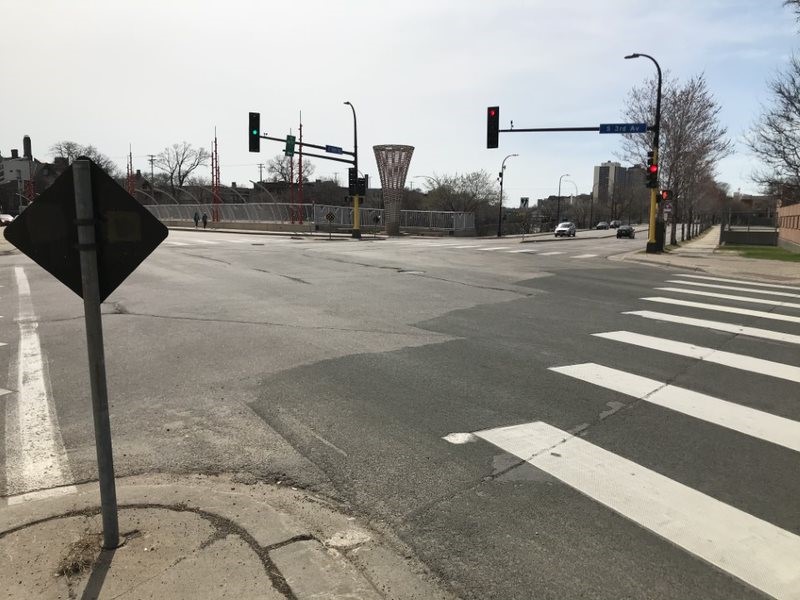 Looking towards 16th Street from southbound 3rd Street, we can see that the left turn from eastbound 16th to northbound 3rd is quite a bit of distance to cover--especially if you're on a bike. This presents a lot of time for someone to come shooting through the intersection from 16th going west. Again, there's a lack of marking for the turn, either for bikes or cars, meaning that users have no visual guide to work with when making the turn. 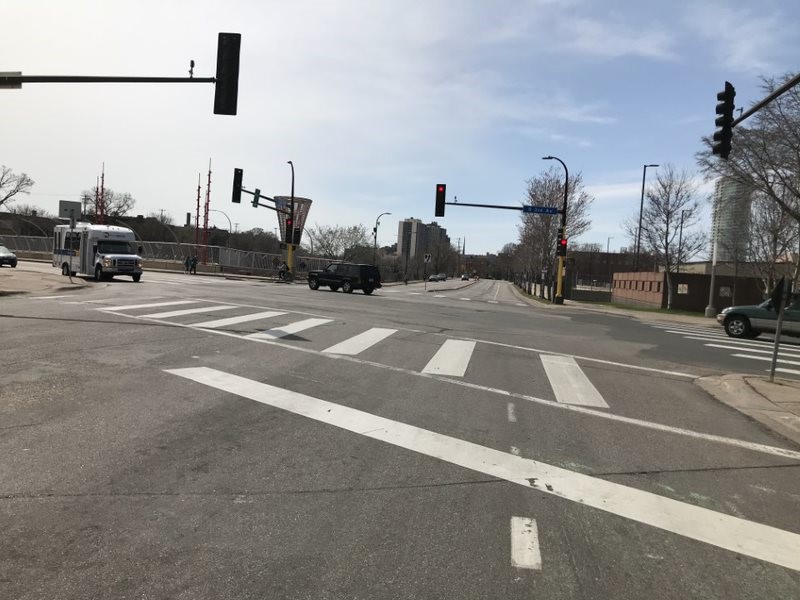 Finally, we come to the ultimate cause of this intersection's danger. This is 16th street looking west. Several problems are apparent. Unlike every other entrance to this intersection, there is no designated left turn lane. This is what causes impatient drivers to pass the cars queuing to make a left turn on the right. They cut off the bike lane in doing so and, most importantly, drivers and cyclists taking a left onto northbound 3rd Street from eastbound 16th cannot see them until they're already in the intersection. The left turn arrow on the traffic light on this part of the intersection is, again, not in use.

The particular dangers of this intersection all have their root in the confusing design of this section. It doesn't work for drivers, transit riders, cyclists or pedestrians. It fosters the sort of dangerous driving that causes so many of the surface-street accidents in our city, and the problems aren't anything that requires a major redesign- a simple repaint of some of the traffic lanes and a reconfiguration of the traffic light sequencing would relieve a lot of the pressure.

All photos taken by Jesse Peterson.