Word on the Streets

Announcing the Rethinking I-94 project.

Our Streets Minneapolis is thrilled to welcome Alex Burns to the team to lead the Rethinking I-94 campaign.

Alex will be helping lead a community-centered campaign to put people first in Minnesota Department of Transportation’s Rethinking I-94 project. This project will determine the future of the I-94 highway corridor between downtown Minneapolis and downtown Saint Paul. The construction of I-94 was devastating for communities along the corridor and the highway’s harms are ongoing. Urban highways lie at the foundation of an auto-centric transportation system that divides neighborhoods, pollutes communities and destroys our climate. Today, transportation is Minnesota’s largest source of greenhouse gas emissions. If we want to truly build a sustainable transportation system that works for everyone, we must move beyond urban highways like I-94.

Earlier this month, we announced that our campaign to transform Lyndale Ave S using a 4-3 safety treatment was successful. We have heard that Hennepin County plans to carry out this conversion sometime next year. Yet, we do not have an official start date or timeline for the project.

A public start date for this project is an important step in making sure that the County is accountable to folks who live, work and play along Lyndale Ave S. While we appreciate the stated intent to carry out the project, a public commitment with a clear timeline will go a long way towards ensuring transparency and building public trust. 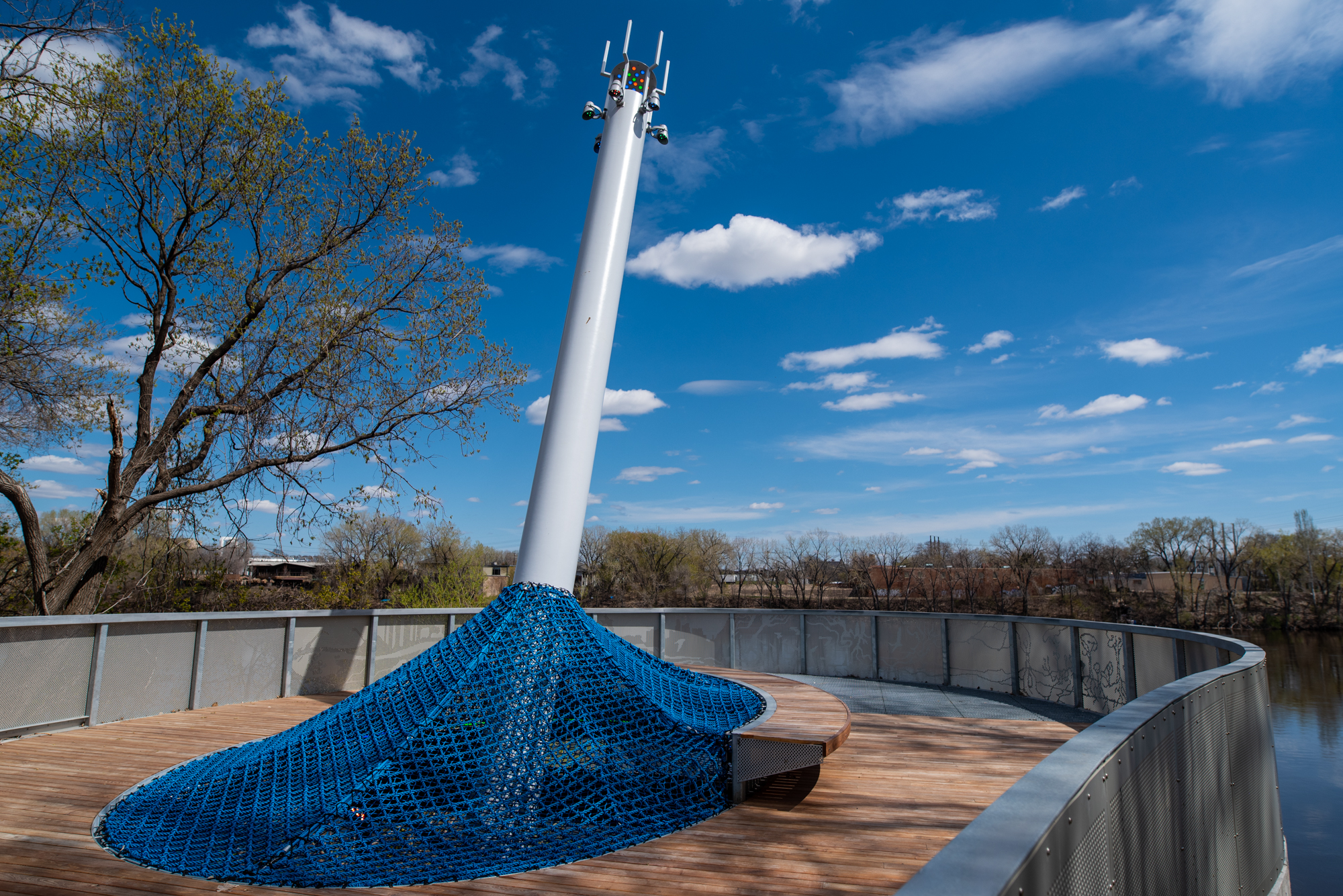 Cyclists and pedestrians have a soaring new lookout on the North Side riverfront at 26th Avenue N. in Minneapolis.

The 26th Avenue Overlook project transforms into an inviting nest-like oasis what previously had been an industrially dominated dead-end space where a chain-link fence and scrub brush blocked the view of the river.

The overlook features a platform that cantilevers people over the river and its bank with a combination of netting, metal grates and black locust planks. The most visible feature is a 35-foot-tall beacon that’s intended as a new riverfront landmark. It incorporates Audubon Society guidelines to minimize impact on migrating birds.

The $1.7 million project creates another beachhead for North Siders to savor the river and its wildlife. It is part of the emerging RiverLink, which eventually will include a trail connection to W. River Parkway. RiverLink stems from the RiverFirst Initiative, which fleshed out the groundbreaking Above The Falls master plan, now 20 years old.

The overlook connects with the North Side section of the walk-bike Great Northern Greenway, a sidepath that leads from Wirth Park to the Mississippi River. along 26th. That implements one of the major themes of the master plan, which called for better bridging Interstate 94 to ease access to the river for North Siders on foot or bikes.

The overlook is largely funded by the Minneapolis Parks Foundation, but also includes regional park funding to the Minneapolis Park and Recreation Board, and funding from the Mississippi Water Management Organization for shoreline and bank stabilization.

A $3 million grant from the state will help to further strengthen the North Side river connection. Park Board staff are currently studying routing options to connect the overlook and greenway to Ole Olson Park, and to recreational paths that stretch far down the river’s east bank to destinations as far as downtown, Minnehaha Falls and Inver Grove Heights. The route study will provide information for preliminary designs, construction estimates and a project timetable, according to Andy Schilling, who managed the overlook project for the Park Board. One likely possibility is to route the connector under the nearby Burlington Northern Santa Fe bridge, Greenway advocates hope that one day the bridge will accommodate recreational traffic to link with the Northeast section of the Great Northern Greenway.

The overlook has an elliptical shape, with the light mast emerging from an open middle, covered by play netting. The surrounding locust plank platform gives way to a metal grating closest to the river.  The railing around the platform includes metal artwork created by Juxtaposition Arts, a North Side teen-staffed art and design center. A bench sits on the river side of the beacon mast.

The landmark beacon’s full-color LED lights were designed to be visible up to half a mile away, and the shaft also is illuminated by downward-facing lights. Schilling said that the beacon will be programmed to use bird-safe colors during known periods of the year and times of day for migratory fowl. A Fordham University conservation biologist concluded that the beacon is unlikely to have any measurable impact on night-migrating birds.