Lowry Ave NE is the boundary line for the Windom Park/Audobon Park neighborhoods and the Bottineau/Marshall Terrace neighborhoods and travels through the Holland neighborhood in Northeast Minneapolis. The Lowry Avenue Bridge crosses the Mississippi River and connects Northeast and North Minneapolis. Before the 1960s, Lowry Avenue NE was a tree-lined neighborhood street with two motor vehicle travel lanes, arching elm trees, and small storefronts. In the 1960s, the street was widened to two lanes in each direction, and in some places to one lane in each direction with parking, by removing the boulevard and street trees. Lowry Avenue NE is scheduled to be reconstructed by Hennepin County in 2023.

Hennepin County released proposed designs for the Lowry Ave NE reconstruction at the December 16th Bicycle Advisory Committee. These designs include many of the recommended infrastructure changes described above; however, there are aspects that fall short of expectations:

- The current designs have a 12.5' car lane width. This is too wide for an urban setting. The National Association of City Transportation Officials recommend lane widths closer to 10'. This width allows for easy movement of cars while discourage speeding along the street. In a city where space is limited, every foot matters.
-One of the designs proposes a 10' shared use path. This is narrow compared to other paths in the city and does not allow for easy movement of bikes and other non-car methods of transportation. The lane should be widened.

Click here to send an email, or copy and paste the template below

Here is a sample script for your email:

I am reaching out with concerns over the designs shared at the December 14th Bicycle Advisory Committee meeting. The proposed designs have 12.5' car lanes. This width is too wide. The car lanes should be adjusted to 10' because it discourages speeding while still allowing easy movement. Additionally, the shared use path should be widened to allow for easier movement of non-car transportation.

Thank you for recognizing the community recommendations in your October statement on the Lowry Ave NE reconstruction. As someone who regularly uses the street, it’s reassuring to have this better understanding of the reconstruction project. I would like to see continued advocacy and commitment to putting people first on Lowry Ave NE.

Over 80 local residents and other users of the street have joined together to form our Lowry Ave NE for People Workgroup. This workgroup has worked the past six months to create a vision for Lowry Ave NE that addresses the current poor conditions for walking, biking, and rolling along the street. Together we have created a set of recommendations for the street based on a community survey, research, and reviews of past community engagement plants along Lowry Ave NE.

The workgroup proposed the following recommendations for Lowry Ave NE:

- The speed limit is lowered to 20 mph on the corridor.
- The street is reconfigured to have only one car lane in each direction.
- Pedestrian improvements are prioritized over wider car lanes, center turn lanes, and above-ground utilities.
- The creation of a shared use path to allow bikers, rollers, and pedestrians to safely and comfortably access the corridor.
- Connection of bike infrastructure to existing bike lanes on Central Avenue NE and elsewhere.
- Intersection improvements to enhance safety for those using the shared use path such as raised crossings and stop or traffic controlled intersections. Marked crosswalks should be placed at every intersection along the project route, whether stop controlled or not. Raised crosswalks are placed at intersections with high numbers of pedestrians.
- A separate demonstration safety project between Johnson Street and Stinson Parkway that will be implemented along with the Lowry Reconstruction

This Fall, Our Streets Minneapolis organized volunteers and community members around this set of community recommendations for the Lowry Ave NE reconstruction. Each week, we released action steps that people could take to push Hennepin County and Commissioner Irene Fernando to recognize the recommendations.

The organizing work and community support paid off. On October 28th, Commissioner Irene Fernando released a public statement on the Lowry Ave NE reconstruction. This statement acknowledges the community advocacy and provides further details on the reconstruction planning. Commissioner Fernando shares which improvements Hennepin County is considering for implementation, ones that Commissioner Fernando herself will continue advocating for, and designs that are not possible due to statute.

Our Streets Minneapolis collaborated with the Lowry Ave for People workgroup to send a letter to County Commissioner Irene Fernando on September 23rd. This letter shares the concerns for the current Lowry Ave NE and emphasized our recommendations for improvements. Click here to view the letter. 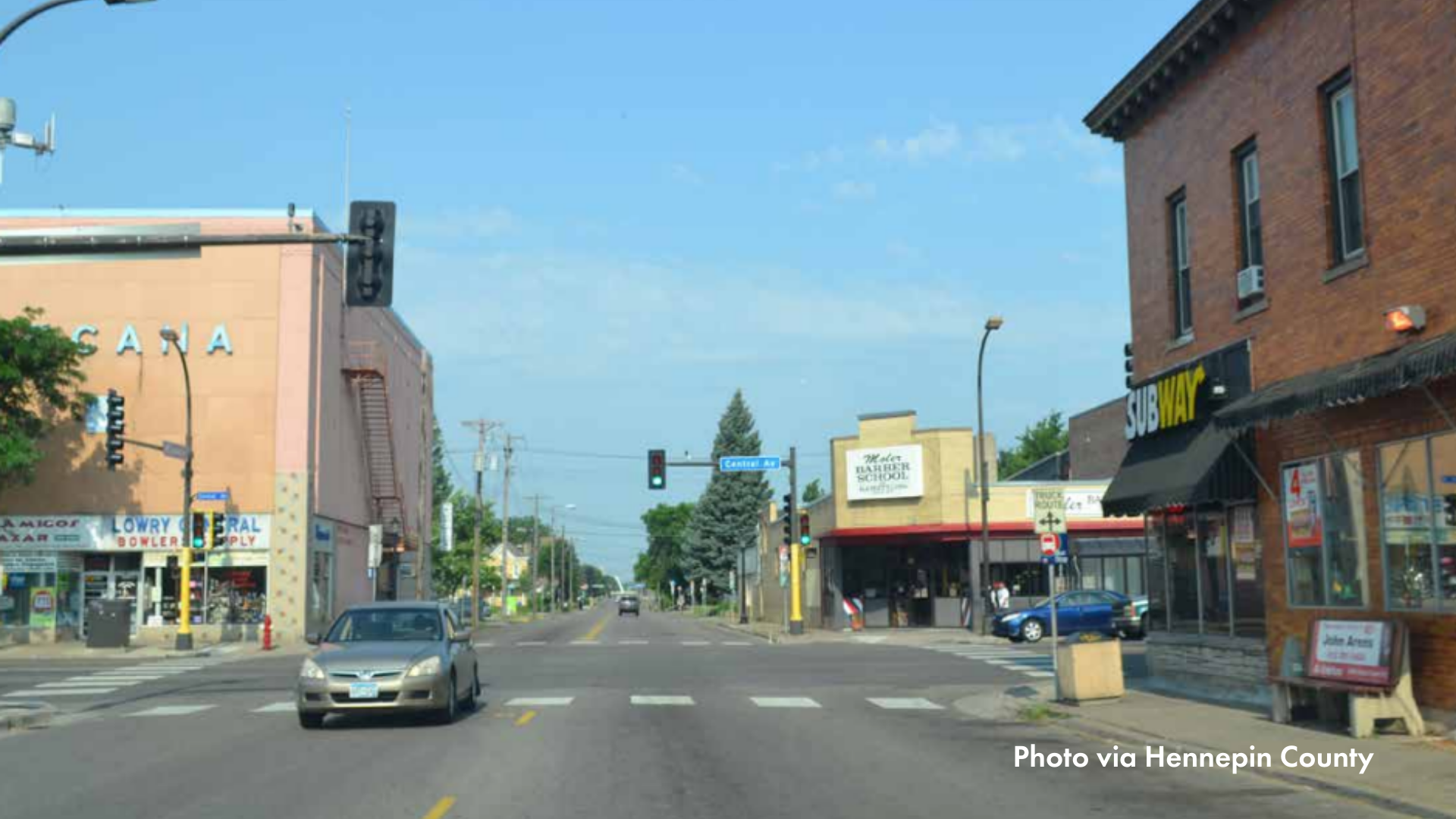 The Lowry Ave NE for People work group met on Monday, February 22nd and 28 people attended the meeting. This work group is part of our County Streets for People campaign to transform Minneapolis streets owned by Hennepin County. 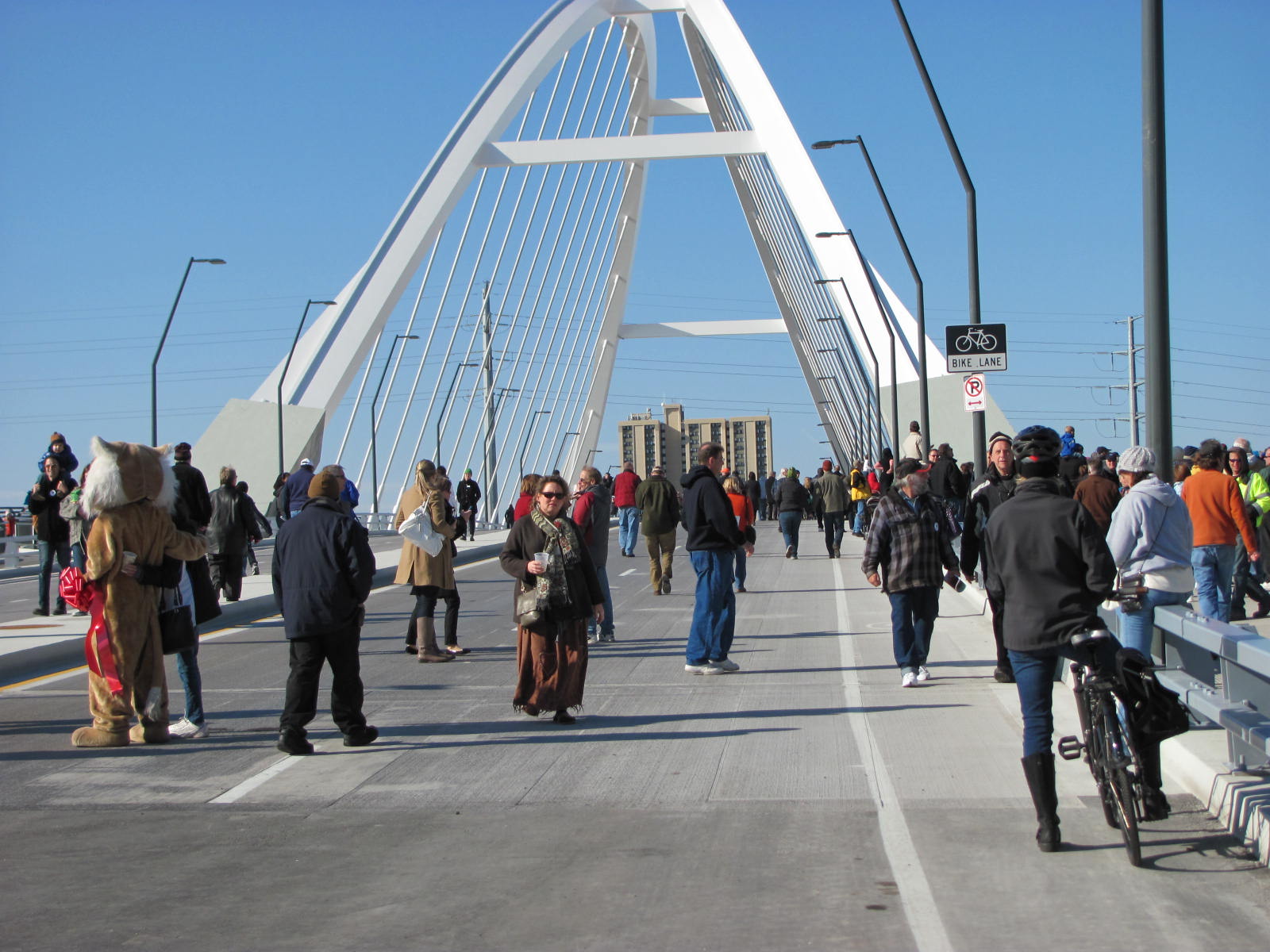 The Lowry Ave NE for People Work Group had its first meeting on Monday, January 25th. A total of 15 people attended. This work group is part of our County Streets for People campaign to transform Minneapolis streets owned by Hennepin County. The goal of this meeting was to discuss specific ways in which this group could work together effectively to create a vision for a Lowry Ave NE that puts people first. As part of this work, we will create an outreach plan to people, organizations, and businesses along the corridor. At our meeting we discussed a timeline for our work.

At its August 19 Engineering Subcommittee meeting, the Minneapolis Bicycle Advisory Committee (BAC) passed a motion calling for bike lanes in both directions on the eastern portion of Lowry Avenue NE. Members also discussed engineering the intersections for the new cycle track on Washington Avenue South and the progress of the 26th and 28th Street Bicycle Improvements. 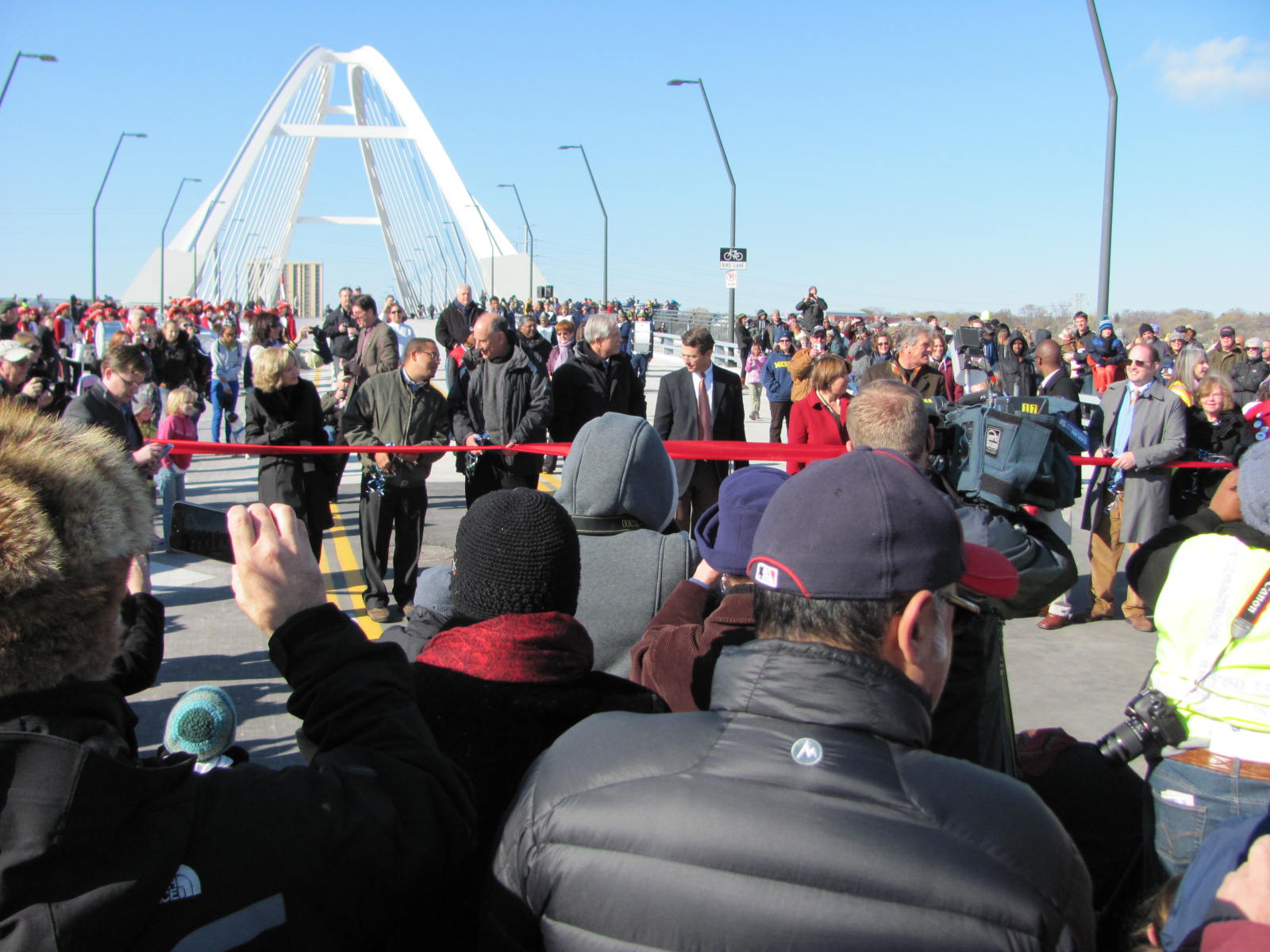 The community came out today to celebrate the opening of the new Lowry Bridge. The slate of elected officials that addressed the crowd attested to the hope for this new bridge that connects North and Northeast in majestic man-made beauty. 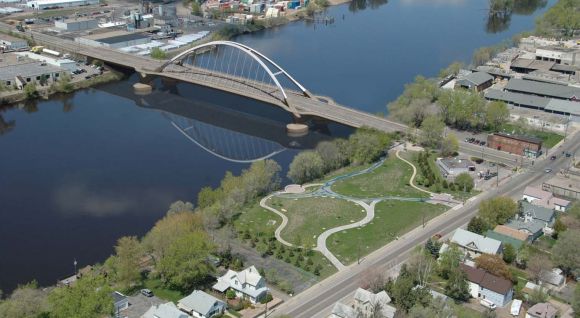 Last month, Hennepin County staff presented drawings to the Minneapolis Bicycle Advisory Committee showing details of the bike facilities that are planned for the Lowry Avenue Bridge.  The Bicycle Advisory Committee, together with the Minneapolis Bicycle Coalition, the Bike Alliance of Minnesota, local residents, and advocates for riverfront trails, have been working with County staff and elected officials on incorporating bike facilities on the Lowry Bridge for many months.

I’m thrilled to announce that earlier this month, Hennepin County Commissioner Mark Stenglein announced his support for the Lowry Bridge safety improvements that the Minneapolis Bicycle Coalition has been advocating for over the last several months. Thank you Commissioner Stenglein for championing these important improvements! Lowry will now include bike lanes, area to ride on the sidewalk, and "slip ramps" to get bicyclists safely from the bike lanes to sidewalk bike area.

As we mentioned a couple weeks ago, significant progress has been made to make the Lowry Bridge safer for all types of bicyclists, but there is still work that needs to be done. Thank you to the dozens of people who called their county commissioners–it made a difference. After months of positive work with County officials that has greatly improved the safety of the bridge (including adding back in bike lanes), we have a disappointing update on an important detail.

Hennepin County is designing and building a new Lowry Bridge, which will finally reconnect North and Northeast Minneapolis. But, the $92.7 million project does not yet include a safe, inviting route for all types of bicyclists across the bridge. We need your help to let Hennepin County Commissioners know that this connection is important to bicyclists and that we need a safe design for the Lowry Bridge.  This bridge is expected to last 80-100 years!

Update and Action for Safe Biking on the Lowry Bridge

In Summer 2012 the  new Lowry Bridge will open to the public. Designed and built by Hennepin County, this $92.7 million project will finally reconnect North and Northeast Minneapolis. But there’s a problem, because Hennepin County still hasn’t committed to providing key safety features that bicyclists have requested. To be clear, Hennepin County staff have made positive steps in considering bicyclists, including a commitment to add bike lanes. This is real progress, and the County deserves credit for this. But important safety problems remain unresolved. This isn’t just bad for bicyclists, it’s also bad for motorists, as I’ll describe below. Please take action today for a safer Lowry Bridge (detail below)!

Lowry Avenue Bridge and Franklin Avenue (between 21st and River) to get bike lanes!

Greetings! My name is Matthew Hendricks, and I’m the chair of the Engineering Committee of the Minneapolis Bicycle Advisory Committee (BAC). I’m a recent transplant to the Seward neighborhood, and for 7 years prior to moving, my family lived in the Cleveland neighborhood of North Minneapolis. I feel very fortunate to be in Minneapolis, where decades of visionary investment in parks, trails, and bike lanes have created a wonderful place to live and bike. In my spare time I enjoy going to nearby parks with my two kids. I also serve on the boards of the Minneapolis Bicycle Coalition and Twin Cities Greenways (www.tcgreenways.org), a group that is promoting a new street-to-park conversion Greenway design that is a hybrid of Milwaukee Avenue and the Midtown Greenway.