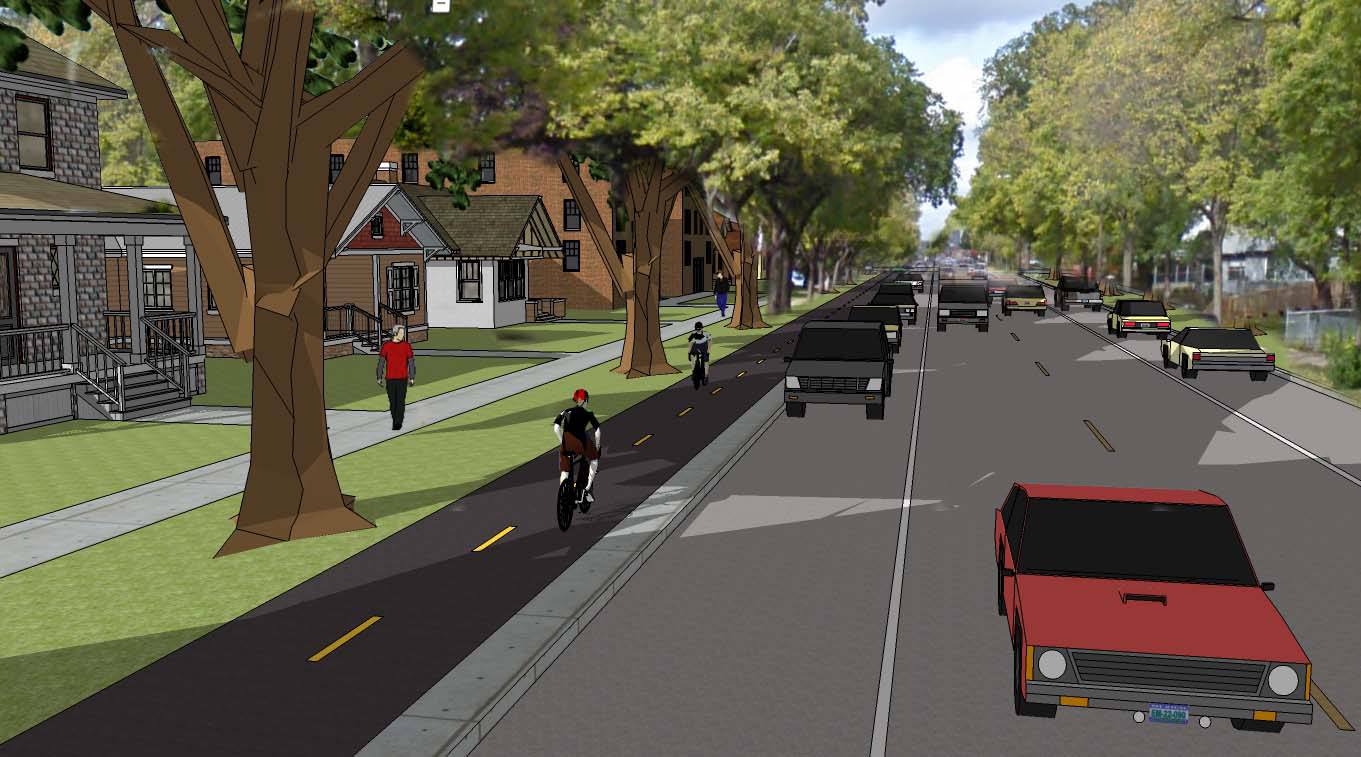 Hennepin County has chosen not to implement a protected bike lane or cycle track for Minnehaha Avenue (as depicted at right).

We're disappointed that they will not sieze this opportunity to transform Minnehaha, especially after very strong public support for the idea. Of the 130 people who filled out comment cards at July public meetings, 89 offered a preference for a cycle track. Additionally, more than 900 people signed postcards in support of a cycle track on Minnehaha.

The County will present more detailed plans for their bike lane design at the two public meetings next week. We certainly hope that you will attend, even if you are disappointed they aren't discussing the cycle track. It's important they continue to hear feedback from people. We’ve asked them to design Minnehaha to allow for the possibility of a relatively simple change to a parking protected bike lane in the future. 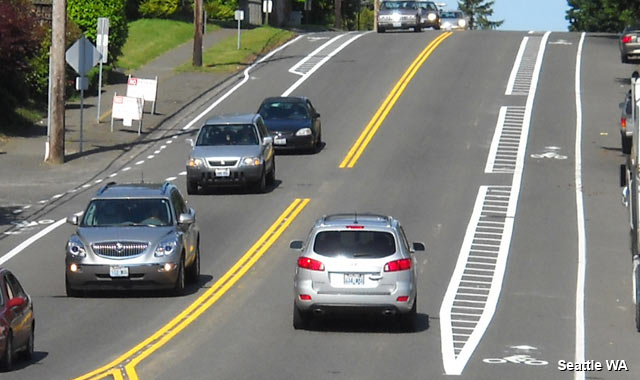 We are glad that the County has at least committed to building a high-quality bike lane. They are planning to use national best practices for on-street bike lanes, including adding a two-foot painted buffer in many areas (like in the picture here), using green paint where appropriate at intersections, extending the concrete from the curb out through the bike lane to create visual differention between the bike lane and the car lane, and using two-stage left turns. They are also looking at the possibility of eliminating the extra "merge" lane that pops up around Lake Street (and currently means the bike lane goes away just north of Lake for a bit).

The Minnehaha Avenue decision will not be approved by the County Board as was previously indicated. This is in line with the standard County process for road projects where County staff work out the decision in coordination with the local County Commissioner (in this case Peter McLaughlin). It will go to City Council for municipal consent later this year.

Thank you to everyone who has engaged on this project. Your interest, emails, attendance at public meetings, sharing with friends, etc. has helped raise awareness and support for protected bike lanes and has undoubtedly led to additional improvements to the bike lane design. We hope that support can carry over for future projects and eventually lead to parking protected bike lanes on Minnehaha as County officials become more comfortable with the design.

We're most disappointed that we were never able to get a great and feasible cycle track design out there for Minnehaha that meaningfully reflected the public input. County staff had planned to meet with us to work on details to reduce tree and parking impacts and maximize intersection safety, but the decision for a bike lane was made before that meeting happened. Our understanding is that Commissioner McLaughlin and staff made the decision after the Longfellow Community Council last week decided not to take a position (their Environment and Transportation Committee has since passed a resolution asking for to wait until the Federal Highway Administration adopts currently pending national guidelines on cycle tracks).