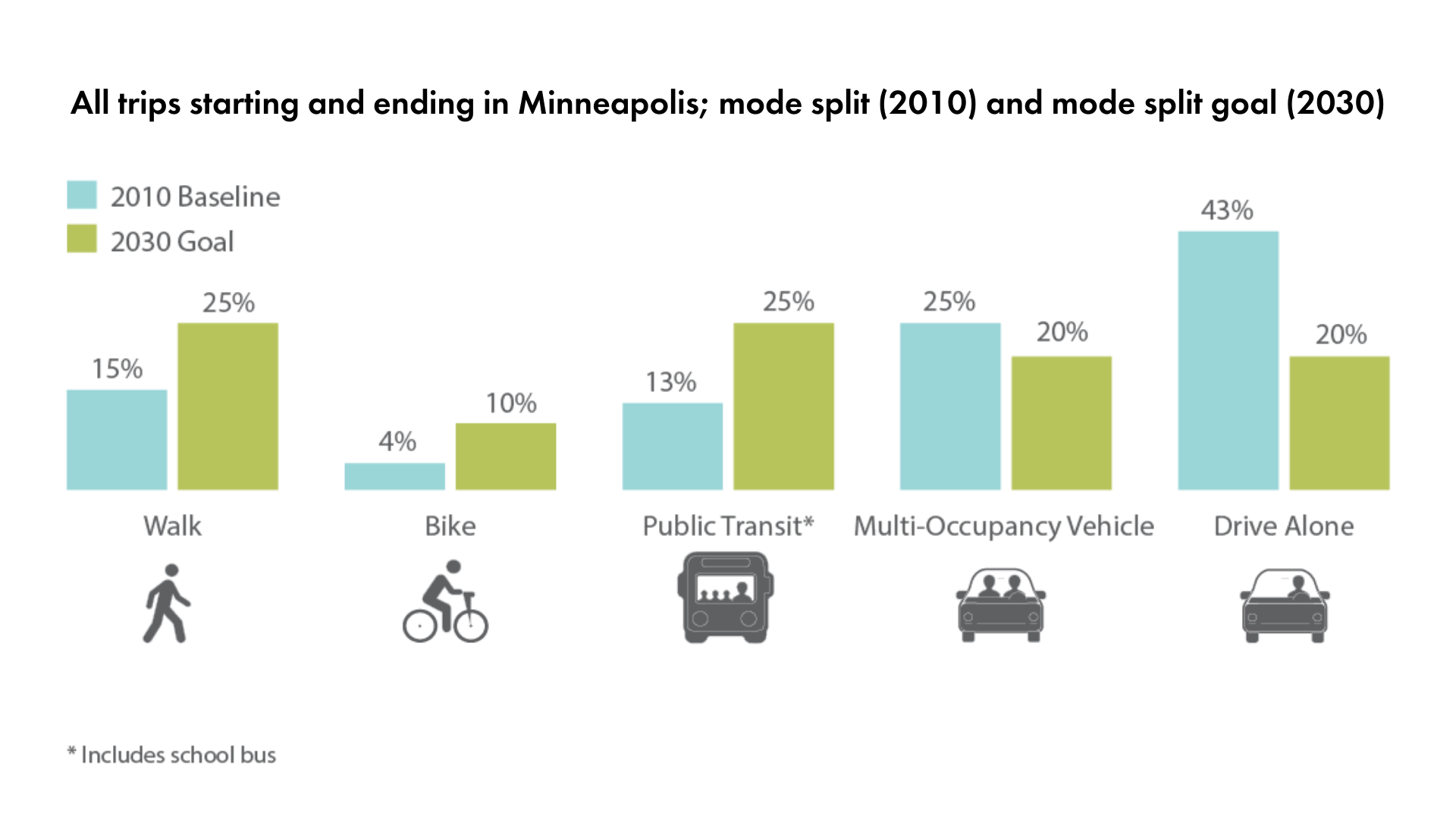 What does the plan get right?

The plan is impressive in its scope and detail. Most importantly, the plan sets a goal for biking, walking, rolling, and transit to make up three out of every five trips in the city by 2030.

There are specific strategies that respond directly to the priorities that Our Streets Minneapolis asked for while the plan was being created. For example, the City answered our call for a comfortable biking and walking experience year-round with a new and improved pedestrian priority network and all ages and abilities bikeway network.

Overall, the plan seeks to rebalance street space so it will more fairly allocate room to biking, walking, rolling, and transit.

Biking
To make Minneapolis a better place to bike, the plan establishes an all ages and abilities network that will be a connected group of protected bikeways, trails, and neighborhood greenways. The biking section of the plan also adds plans for protected intersections, raised bike crossings, and transit islands to make it easier and more comfortable to bike through intersections with car traffic.

Walking
Some highlights of the walking section include re-evaluating the use of pedestrian actuated buttons (commonly known as ‘beg buttons’), marking crosswalks at intersections without traffic lights, and making pedestrian street lighting part of reconstruction projects on the pedestrian priority network. We’re also excited to see the proposed creation of a pedestrian plaza program that includes a recommendation to explore opportunities for car-free streets.

The plan identifies several downtown streets for future bus only lanes. Many four lane streets that are not designated to receive bus-only lanes are slated to lose one car lane so they will only have three lanes total. With more bus lanes and fewer car lanes on busy streets, people will be able to more easily get around by walking.

Putting people first on streets
In many street projects, the engineers who create street designs assume that car traffic will increase according to an already existing growth rate. In the Draft Transportation Action Plan, the City removes this pre-determined growth in car traffic while planning transportation projects. This is great news as we work toward streets that put people, not cars, first.

The City takes this idea one step further by getting rid of the level of service (LOS) metric they’ve historically used to figure out how successful a street project is. When engineers and planners use level of service to determine success, they measure how long cars are delayed as the result of a project. Using this metric, the less delay people in cars experienced, the more successful the street project was in the eyes of designers. Without this metric, City planners and engineers will have more freedom to include items like narrower car lanes, brightly marked crosswalks, and better bike infrastructure in their designs.

For a more detailed overview on why level of service leads to worse outcomes for people biking, walking and rolling, check out this article. 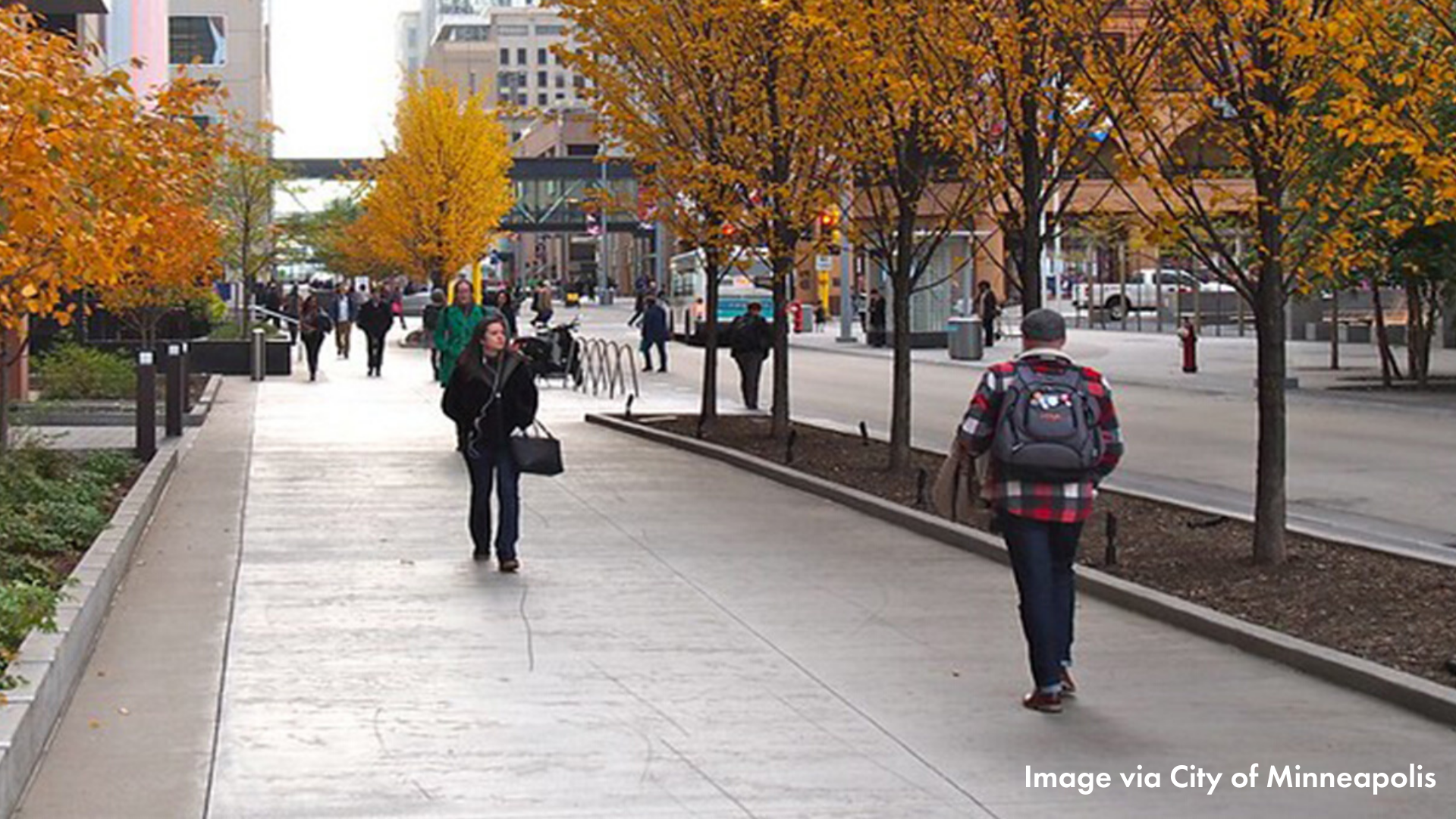 Will the plan result in real changes on the streets I use?

We think it will. This plan is visionary. And, it is only the first step in making city streets better places to bike, walk, and roll.

We will continue to ask questions about this design guide to learn more about how exactly the Transportation Action Plan and street design guide will integrate with existing transportation decision-making processes, like community engagement and the recommendations of the Bicycle Advisory Committee, the Pedestrian Advisory Committee and the Capital Long Range Improvement Committee.

Another next step will be to fund the projects outlined in the plan. The Transportation Action Plan isn’t ‘fiscally constrained.’ This means that when it is approved, there won't be any money allocated to start implementing its recommendations right away.

We ask that our leaders at the City of Minneapolis find ways to adequately fund this plan. There are many opportunities for the City to prioritize projects that are low cost, and can be completed quickly. Some examples include using paint to reduce the number and width of car travel lanes, marking crosswalks at intersections across the city, and removing pedestrian actuated buttons at crosswalks. 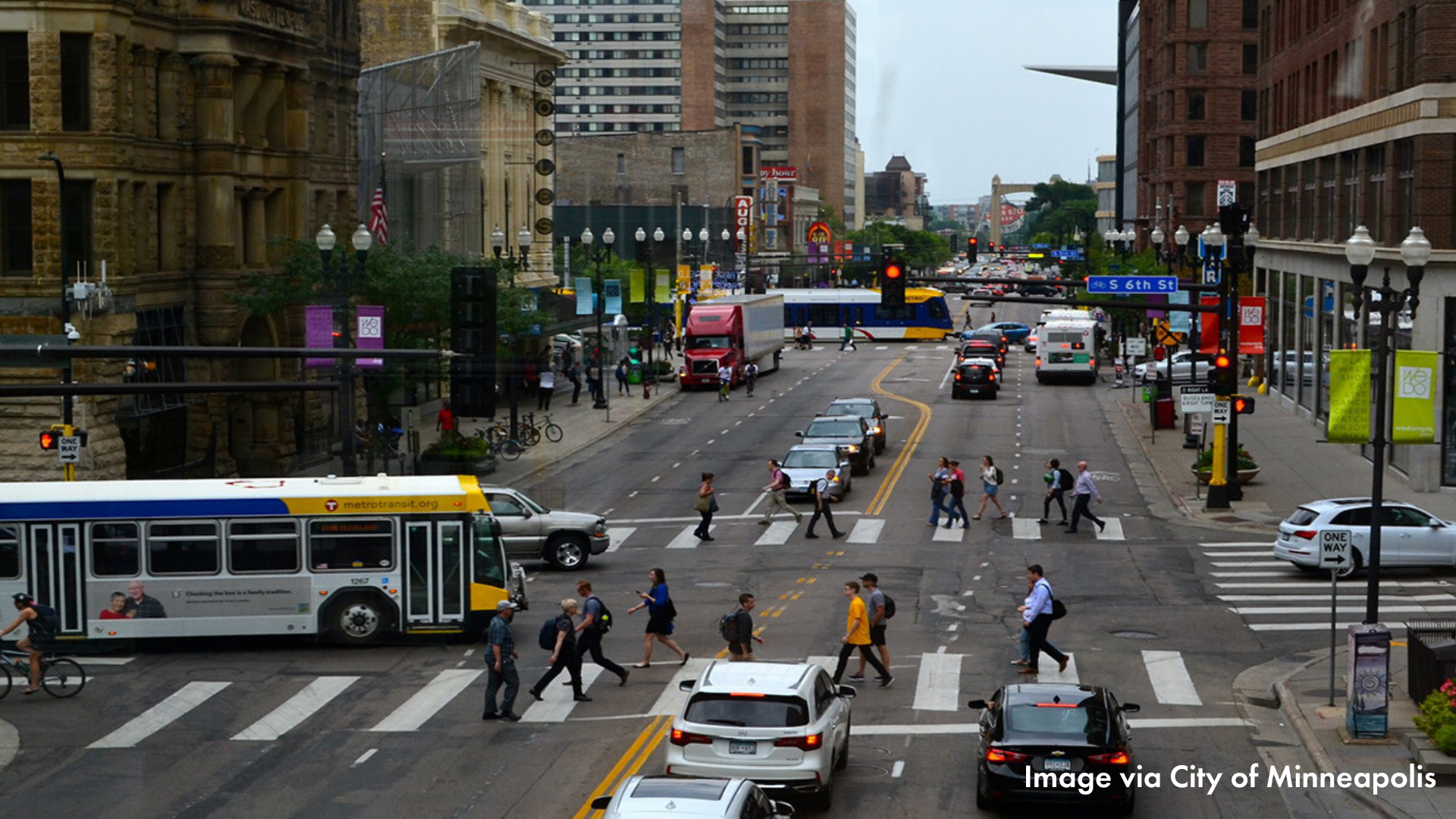 What needs improving in the plan?

The plan should not call for increased traffic enforcement
The plan calls for obtaining legislative approval to install automated traffic enforcement technology in the city. We strongly disagree with this recommendation. At Our Streets Minneapolis, we believe that enforcement is not a good strategy to make streets better places to bike, walk and roll. Increased enforcement, including automated enforcement will amplify racial disparities and disproportionately harm black folks, indigenous folks, and people of color.

Transportation projects can also attract gentrification and create displacement in communities that have a history of being marginalized.  We ask that transportation projects in neighborhoods that are classified by the City as Areas of Concentrated Poverty (ACP 50) are evaluated using tools such as the Equitable Development Principles and Scorecard from our friends at the Alliance for Metropolitan Stability.

The plan should include winter sidewalk maintenance
The plan leaves out how the City will keep walking infrastructure clear of snow and ice in the winter. Winter sidewalk maintenance is a critical part of making our city an easy, comfortable place to walk all year long. The pedestrian priority network provides a great opportunity to create a pilot program for the City to remove snow and ice from parts of the network. We ask the City to do just that--and move toward clearing the entire pedestrian priority network over the next few years.

The plan won’t govern all the streets in Minneapolis
The Transportation Action Plan will primarily apply only to streets owned by the City of Minneapolis. Yet, nearly half of the most dangerous streets in Minneapolis are owned by Hennepin County. Examples of Hennepin County-owned streets include Franklin Ave, Lake St, Lyndale Ave, and West Broadway Ave. Plus, freeways like I-94, 35W and some arterial streets like Central Ave are owned by the Minnesota Department of Transportation (MnDOT).

To truly create a city that puts people first on our streets, we must re-shape streets owned by the County and MnDOT. We urge leadership at the City of Minneapolis to hold their partners at these agencies to the same high standards set out in the Transportation Action Plan. 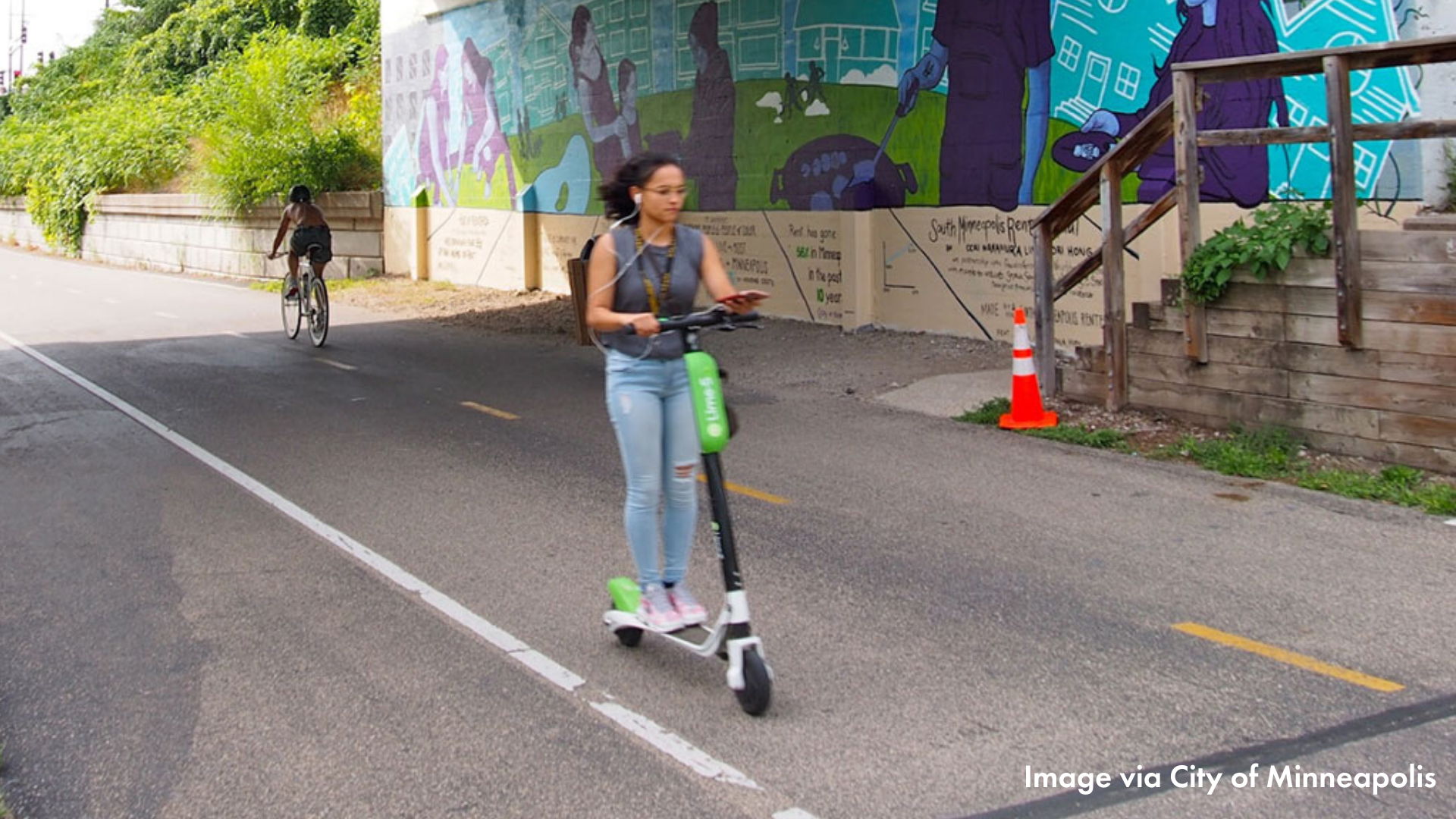 How can I help?

We believe that this is a visionary, comprehensive and yet sensible plan that will help us meet our climate, equity and mobility goals. Implementing the plan will establish Minneapolis as a leader among cities that aim to put people first in transportation.

The plan has a 45 day comment period that started on Monday, the 9th of March, and ends on Wednesday, the 22nd of April. You can help City staff know what they’re doing well and where they can improve by commenting on the draft plan.

You can also provide feedback at one of the City’s open houses. Click here for open house dates.

Thank you for being part of our movement for streets that put people first!