Proposal for Nice Ride Minnesota-led transition to "dockless" bike sharing differs from most others around the country. Details & our position:

What is planned for dockless bike share in Minneapolis? 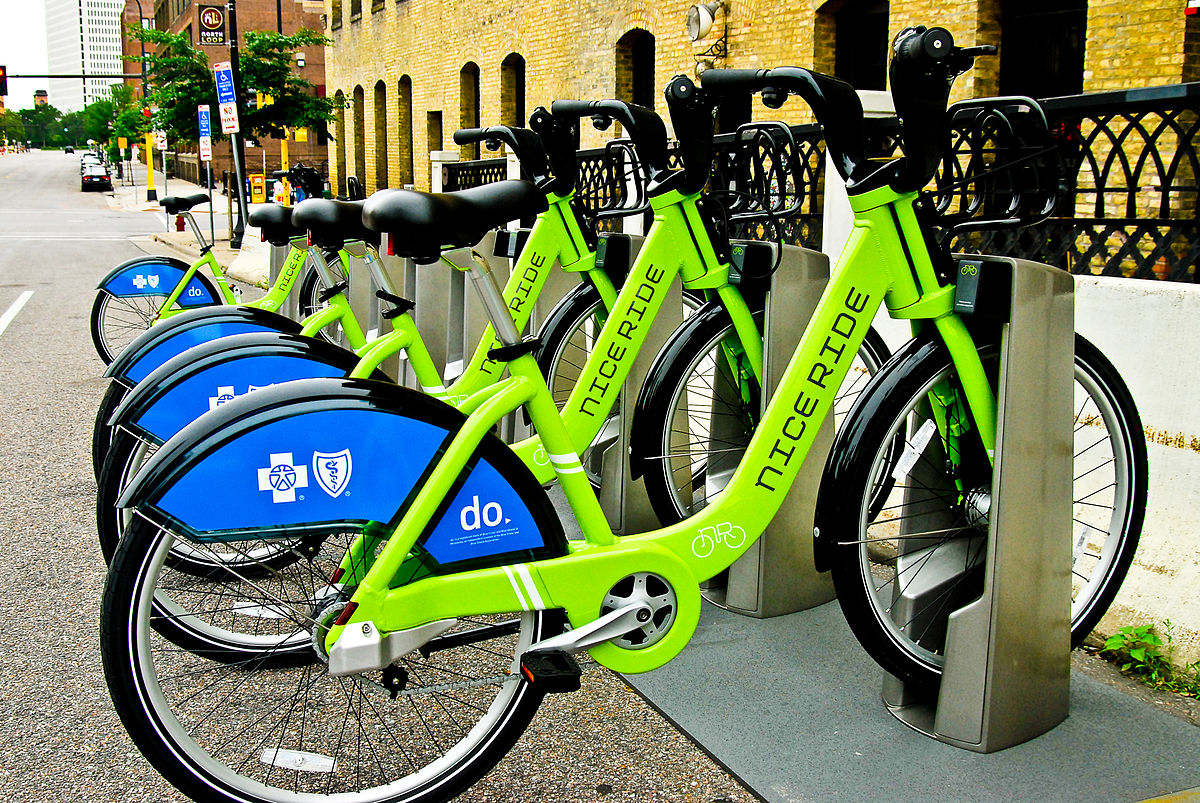 The City of Minneapolis is proposing continuing its exclusive relationship with Nice Ride Minnesota for bike share. It's amending details of their existing contract to reflect dockless bike share. The University of Minnesota and Minneapolis Park Board are also on board. St. Paul has opted out of participating in Nice Ride's transition to dockless for the time being. Golden Valley is one of several suburban communities working on a dockless pilot separate from Minneapolis.

Nice Ride has decided to expand to dockless bike share in Minneapolis in partnership with Motivate, a company based in New York that runs several of the larger docked systems in the country, including New York, Washington D.C., and Chicago. This provides entirely private funding for the expansion.

Based on recent information from Nice Ride, the City, and information that Motivate shared at a public meeting in November, we can expect:

Nice Ride has an update event April 25th from 5-7pm at Dayblock Brewing where they will share more details. 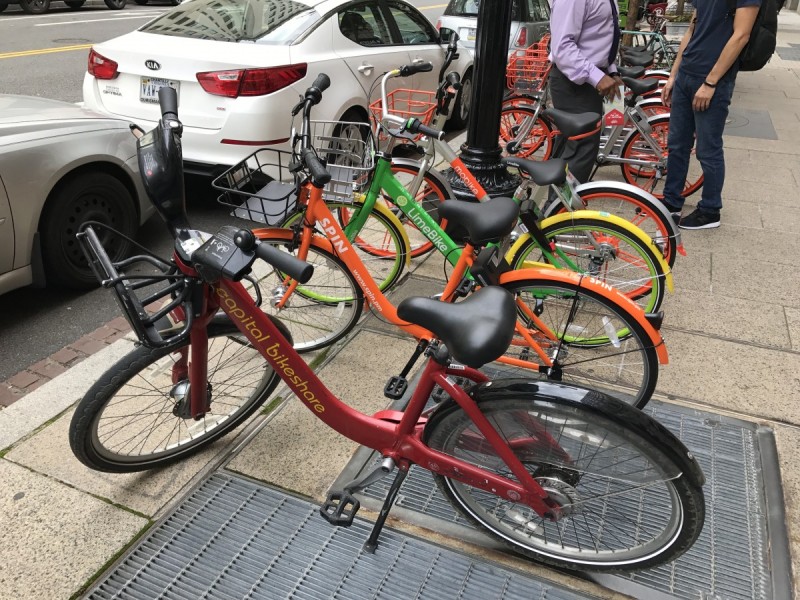 Scenes like the one on the right from Washington, D.C.--with bikes from multiple companies parked on a general sidewalk--won't happen in Minneapolis. That's because at the core of the Minneapolis approach are two features that are at least currently pretty unique in dockless conversations around the country--having an exclusive provider and using virtual stations throughout.

Our Streets supports an exclusive relationship with Nice Ride Minnesota for a pilot project of dockless bike share with some considerations (articulated below in our position). The Minneapolis Bicycle Advisory Committee has also supported such an approach.

Such a situation differs from Seattle, D.C., Dallas, and a number of other cities that are taking a regulated market approach to providing dockless bike share. There are multiple private providers in each of those city duking it out for market share.

Some have argued that a regulated market means competition that will drive access (more bikes), cheaper prices, and better service more so that in an exclusive relationship. That does seem to be true in the short term for at least number of bikes and prices as there currently is a lot of venture capital flowing to dockless bike share.

After looking at this in other cities, talking to people and listening to proposals, I personally strongly feel that a contract with a single entity is the most likely approach for dockless bike share to be the most successful in Minneapolis (and hopefully it can include other cities in the region in the future).

I think it provides the best chance to serve more parts of the city (if required in the contract), whereas private companies on their own have incentive to focus in highest demand areas. It also easier to work with one company to ensure bikes aren’t being left blocking sidewalks, and it will be sustainable over a longer term in our market, where many people already own bikes.

Now, the contracting is important to make sure Minneapolis gets good details in exchange for exclusivity. And it still might not work out, because the bike share industry is changing quickly. But this is short-term deal where we can learn a lot and see how other cities' models are working and reevaluate in a few years. 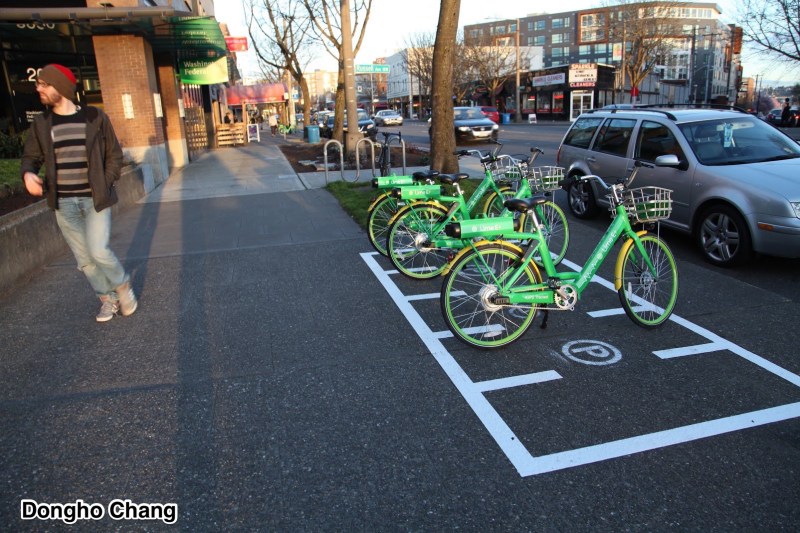 Central to Motivate's proposal to Nice Ride was the use of "virtual stations," which are corrals where bikes are returned. They may look like this pilot painted corral in Seattle, which they are trying in business districts where parking of dockless bikes has been problematic.

The City has chosen to make use of virtual stations required within their updated contract with Nice Ride and will require that all bikes are returned to virtual stations. The City defines them "as GPS geo-fenced areas designated on an app and/or website identifying locations. The permitted virtual stations will be field identified by some combination of signage, striping, or other traffic control devices."

While Our Streets recognizes that virtual stations may be prudent for managing the right of way in some situations, we are concerned that requiring virtual stations throughout the City will limit accessibility to bike share and make it harder to serve many neighborhoods of the city well. We hope that flexibility will be provided in the contract to allow for different approaches to be tried over the pilot period rather than locking in solely on virtual stations that require individual permitting (which takes time) and striping or signage.

Here is our detailed position on the dockless bike share details coming to the City Council Transportation and Public Works Committee at 10am Tuesday. We'll live tweet or you can join at City Hall 317 or online.

Dockless bike share is a great opportunity to expand access in Minneapolis and help make progress towards numerous City goals. We appreciate the work that City staff and Nice Ride Minnesota staff have done to get to what is being presented on Tuesday.
Our Streets Minneapolis supports the City having an exclusive relationship with Nice Ride Minnesota for a pilot project of dockless bike share with the following considerations:
For the contract amendment action being considered on Tuesday, we'd offer specifically:

"12. Requires dockless bicycles to be self-locking, and parked within defined virtual stations when not in use.

13. Defines virtual stations as GPS geo-fenced areas designated on an app and/or website identifying locations.  The permitted virtual stations will be field identified by some combination of signage, striping, or other traffic control devices."


It does not appear that this provides a lot of flexibility to try different ways to sort out parking of dockless bike share bikes. As we note in #2 above that concerns us. We hope hope that questions will be asked about that on Tuesday and potentially a tweak in this language or a staff direction could be considered to get to a place where we are locking in for virtual stations for the next 3+ years as our only way to provide access to bike share bikes.