Last night dozens of volunteers, elected officials, and staff and supporters of the Minneapolis Bicycle Coalition gathered to celebrate what has been an incredible 2015 for biking in Minneapolis. We have had great success in moving our city towards being a safer and more comfortable place for anyone to hop on a bike and ride, and that's something we should all be proud of. Unfortunately while we were celebrating our successes, just a few miles away in St. Paul a tragedy was unfolding as another pedestrian was struck by a vehicle - this time a mother and a small child who were trying to cross a busy, four-lane street. That terrible crash is a stark reminder that for all the success this year, and all the great work we have planned in 2016, there's still a lot more work that needs to be done to make our streets places that are safe for everyone to use, no matter if they're on foot, in a wheelchair, on a bike, or in a car.

That tragedy especially hit home for me as the father of 13 month old child, as I live near a similarly-sized street to Maryland Ave - Lake Street in Minneapolis. Obviously a lot of the details are still coming out about what happened, but initial reports seem to indicate that while three lanes of traffic stopped, one driver went around the stopped cars at high speed and hit the mother and child as they crossed. Having myself attempted many times to cross at an unmarked crosswalk with my baby along Lake Street only to have only one or most frequently no vehicles stop, it's not hard for me to see how something terrible like this could happen.

In what now looks like a very poor bit of timing on the part of the Star Tribune, this victim-blaming article (unfortunately from a reporter who is usually very on the mark when it comes to walking and transit issues) about pedestrian injuries and fatalities was run on the previous day. The article is a prime example of how framing an issue can have a huge impact on public perception of blame in a crash, and how that can lead to a narrative that blames cyclists or pedestrians for their injuries or deaths, rather than making us think about how our road design, driving habits, and driving culture lead to a large number of fatalities and injuries on our roads every day. By focusing on what the article even admits is the least likely reason for pedestrian deaths ("Such risky behavior has caused the percentage of pedestrians killed while using cellphones to rise from less than 1 percent in 2004 to more than 3.5 percent in 2010...") it lets drivers, and most importantly the way we prioritize use of our streets off the hook.

The article is also a good example of trying to shift the blame to the victim by noting that they weren't wearing a helmet, or reflective clothing, or some other failing. That serves to shift the culpability away from driver behavior and street design and on to the person who was injured or killed. That's not to say that we don't all share responsibility when we're on the road - cyclists and pedestrians should of course follow traffic laws and act predictably - however the lack of "proper" clothing or other accouterments on a pedestrian or cyclist doesn't remove the onus from the driver to drive defensively and be aware of their surroundings and other road users, or for the city to take a critical look at how our infrastructure encourages bad driver behavior by design.

The article oddly ends with a number of examples of pedestrians (none of whom it appears were texting, or otherwise distracted) being forced to wear reflective clothing because of inattentive drivers or even being "clipped" by speeding drivers while in a crosswalk, including this quote from a pedestrian downtown:

“I put my phone away. I act appropriately. I don’t want to be blood on the sidewalk or a statistic.”

Unfortunately, despite what the article implies, it's not enough for pedestrians to be aware of their surroundings if those surroundings are sending a signal to drivers that it's ok to speed, take corners fast, or encroach on pedestrian space.

Our streets are failing us

The elephant in the room in all of these discussions are our streets themselves. Both the Star Tribune article on pedestrians and the Pioneer Press article about the most recent crash don't talk at all about how the design of streets play a role in encouraging bad behavior, however it's obvious that streets designed to move the largest amount of automobiles quickly through a neighborhood are by design not serving the needs of pedestrians and cyclists, and are also by design dangerous for all users. That we need to "improve" our streets by grafting on solutions like HAWK signals or those embarrassing orange flags should be seen as admissions that we have created a street that doesn’t work for everyone. What's needed is a focus on building our streets to a human scale, in a way that makes it clear that the top priority is people - not cars. 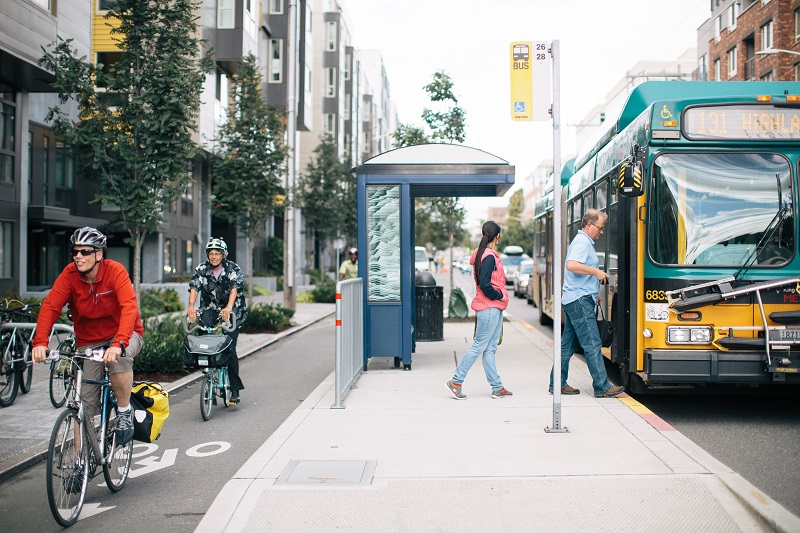 The City of Minneapolis is working to build out a Complete Streets policy that would help guide just that sort of street design moving forward, and has already placed a lot of emphasis on building streets to meet the needs of the most vulnerable users first. While this is a great start, and I hope to see this progress into an even stronger final policy document (and one that's actually adhered to), this only addresses new or redesigned streets - not the hundreds of miles of streets we have in our city that aren't due for reconstruction any time soon.

That's why campaigns like Bikeways for Everyone matter, and why the push for protected bikeways matters so much to me, as it should to everyone who bikes or walks in Minneapolis. We installed 6 miles of protected bikeways this year, and are on track to surpass our goal of 30 miles by 2020 - the City in fact has passed a plan calling for more than 48 miles in the next few years! That's 50 miles of improved streets that deemphasize moving cars as quickly as possible. Still just a drop in the bucket overall, but an amazing step forward, and an acknowledgment that the safety of all road users is important in Minneapolis. 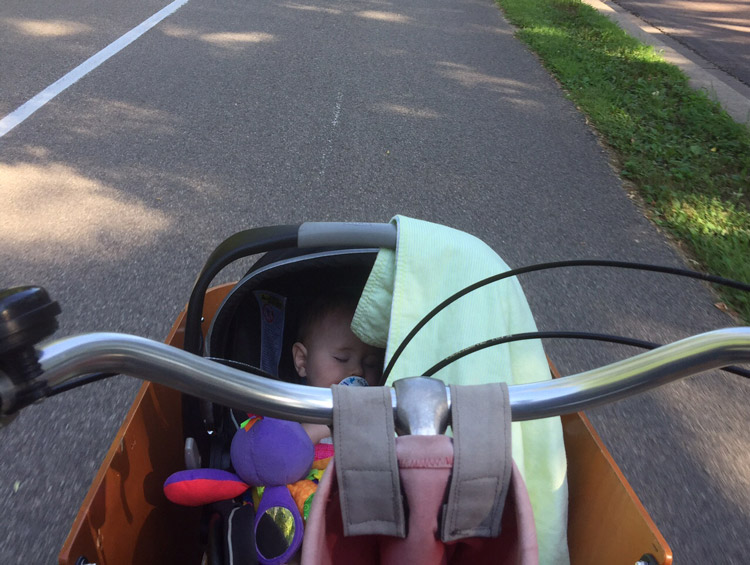 At the end of the day, this is about people. For me personally, it's about being able to bike or walk around my neighborhood, or wherever I need to go with my 13 month old son, without the fear of being injured or killed just because we're not in a car. We spent this summer biking to daycare, going for walks around our neighborhood, and visiting a number of local businesses on foot or bike because our neighborhood is older with narrow streets that signal to drivers to slow down and pay attention, and with lots of other people out biking and walking. We have great off-street trails, and with new facilities like the Oak Street bikeway near us, even on-street paths to get us where we need to go safely. These things make a huge difference in not just making life more fun, but also enable us to save money by having only one car for our family, and to live healthier by walking or biking as transportation.

I recognize that I'm very lucky to live where I do, and while I know there are a million ways in which it could be better (looking at you, Lake Street!), we have a number of amenities that other parts of the city do not. It's on us as the Minneapolis Bicycle Coalition and as residents of Minneapolis to push our policymakers and our city to make sure that we are growing our city in a way that serves all residents, that is equitable, and that gives everyone the ability to feel safe in their own neighborhoods no matter how they choose to get around. We have a long way to go on that front still I'm afraid, however the Coalition's new strategic plan focused on bicycle infrastructure, bicycle encouragement, and looking critically at how biking intersects with race and equity is a promising start.