Bikeways Workgroup at the U of M Kickoff Recap

On Wednesday March 12th, the kickoff meeting for the University of Minnesota Bikeways Workgroup was held on the West Bank campus of the University. In partnership with the Minneapolis Bicycle Coalition, the event was organized by the UMN-Twin Cities chapter of the Minnesota Public Interest Group, (MPIRG) a statewide student-lead nonprofit. It is the first meeting for the region, and every seat in the room was filled.  Over thirty people attended! 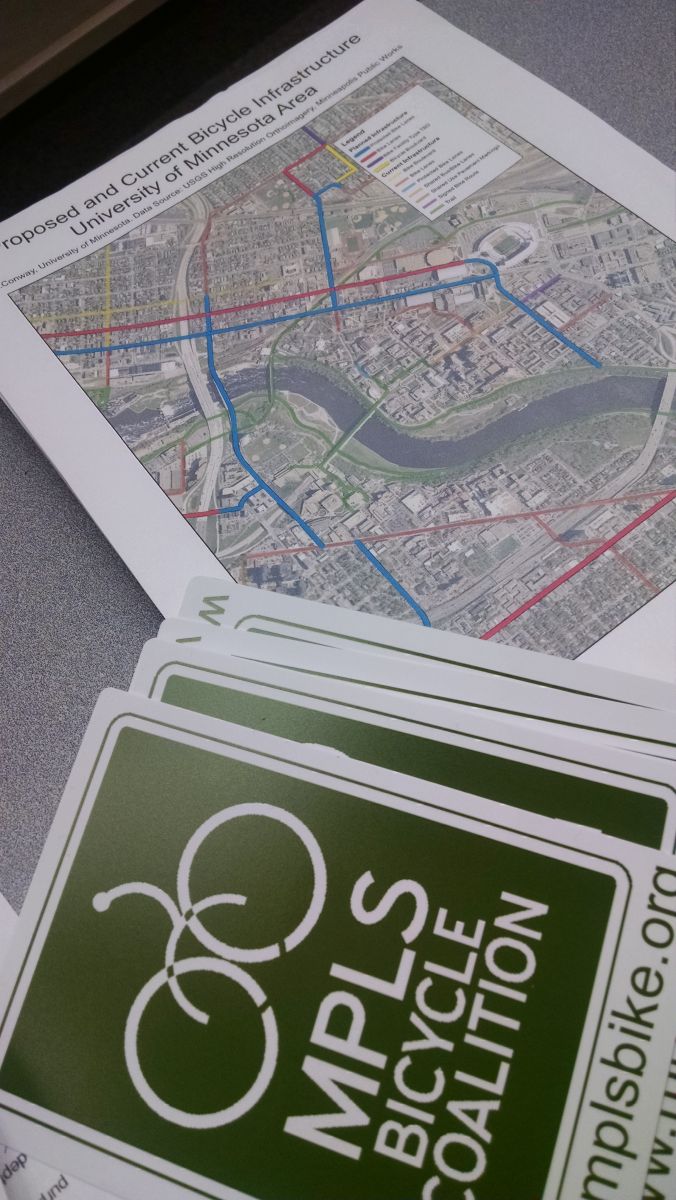 We intend to hold meetings on the first Thursday of each month, so the next meeting will be on this coming Thursday, April 2nd! We will be meeting at 6pm,Appleby room 226. Appleby Hall is next door to STSS on Pleasant St. SE. We will start the meeting there, and then walk to Oak St. SE to view the site of one of the bikeways we discussed last meeting.

Email [email protected] and let us know you would like to receive email updates for U of M routes.

Bikeways for Everyone near the University of Minnesota Campus

Biking on the University of Minnesota Campus is already an important factor in the daily life of students. Due to the scale of the campus and student housing region, it is often the fastest and most convenient option for trips to class, to see friends, and run daily errands. Additionally, it is a viable way to reach other parts of the city without concern over the complexities of parking or transit. However, there are several areas in which the bikeway infrastructure in the region has room for improvement- which currently form obstacles to many students and community members feeling that riding their bike is as safe or convenient option as it could be. There is a marked absence of protected bikeways in the region, leaving bicyclists exposed to and potentially in direct contact with car traffic- which is the case on many of the regions thoroughfares which serve as major arteries for both students traveling to and from campus and housing and to significant and fast car traffic-and as such is danger which many students choose to forgo by using slower transportation options. Another major obstacle to biking on campus are the inconsistencies and complexities of campus bikeways and their interaction with pedestrian areas, which often result in a mixing of bicycles and pedestrians in both pedestrian areas and bikeways. This leads to tensions to students who happen to be either biking or walking, and inconveniences all parties. Additionally, winter bicycling is present on the University of Minnesota Campus during large parts of the school year, but improved protections for bikeways and snow removal on bikeways could drastically increase winter biking's appeal to many students.

The meeting of this workgroup will encompass both long and short term goals, but in the kickoff meeting bikeway projects with potential near-term implementation (2015-2017) were discussed.   The routes which were specifically addressed are the following:

After these routes were introduced, the meeting divided up into small discussion groups to brainstorm the merits of these routes as well as general ideas and wishes for bikeways in the region. Here are some of the ideas that were brought up

There was much enthusiasm from the attendees about the near-term routes, as well a desire to go further in connecting these bikeways with new ones and improved current bikeways around campus.  Fortunately, many suggestions expressed corresponded with some bikeways which have long-term potential for implementation.  It was apparent that the prospect of improvement of campus bike infrastructure through direct student and community involvement is an exciting and appealing prospect for many community members.

We hope to build more on these ideas and ones relating to specific bikeways as time goes on. We intend to hold meetings on the first Thursday of each month, so the next meeting will be on this coming Thursday, April 2nd! We will be meeting in STSS at 6pm, and we will send out the exact room number with a reminder later this week. Hope to see you all again!