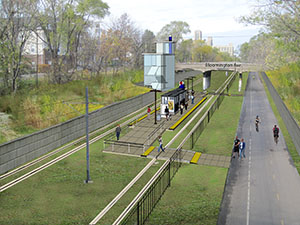 This Metro Transit rendering shows a station under a turf track design.

At Tuesday's meeting the Minneapolis BAC's Engineering Subcommittee passed a motion echoing the Midtown Greenway Coalition's (MGC) draft resolution supporting a turf-track embedded transitway in the Greenway with as much single-track and the least amount of new retaining walls possible. The full BAC will take up the motion at its Wednesday meeting.

Metro Transit favors building a 4.4 mile long light rail line along the Greenway in order connect the Blue (Hiawatha) Line to the future Green (Southwest) Line through South Minneapolis. These connections would be at West Lake station of the Southwest LRT and the Midtown station of the Blue Line.

Rebecca Harnik, who is MGC's Program Director, said the coalition favors the shortest streetcar vehicle needed to meet ridership capacity because a streetcar would be less disruptive than a full light rail car. The Engineering Subcommittee decided against taking a position on the length of the car or to weigh in on the streetcar versus light rail argument at this time.

Even recently, much of the Midtown coverage, such as in the Star Tribune, Finance and Commerce, and our own had focused on streetcars as the primary option. MGC has also advocated for streetcar. However, the Metro Transit study seems to emphasize light rail. BAC members speculated that Metro Transit may favor light rail because it already has built the infrastructure around operating and servicing light rail cars. The difference is somewhat academic since the Midtown corridor is already a transit dedicated corridor and would interact with cars only minimally (one major distinction between the two being streetcars can mix with traffic but light rail operates on an exclusive guideway). A standard light rail car is 94 feet long and carries 134 passengers and a modern street car is 67 feet long and carries 115 passengers.

Enhancing bus would decrease West Lake to Hiawatha transit times from 42 minutes to 30 minutes and increase frequency from 15 minutes to 7.5 during peak hours and 10 midday. Light rail would take 13 minutes and run every 10 minutes. 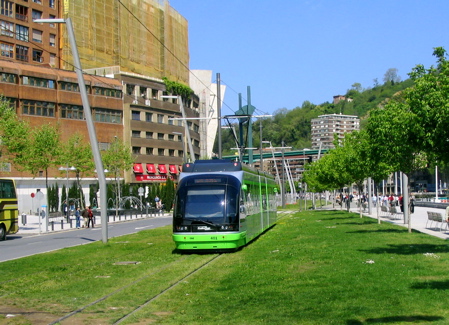 This example of turf track comes from the Euskotren in Bilbao, Spain (courtesy of Leland, Wikipidia commons.)

Turf track was mentioned in Metro Transit's study handout, but it seems to be far from their default option. Turf track is prevalent in Europe but yet to be implemented in the Twin Cities, where ballasted track in the norm.

In turf track the crushed rock and exposed railroad ties typical with ballasted track are replaced with turf in between and around the tracks. Harnik said the MGC favors turf track because it would help keep the Greenway green.

Another important element to reducing the negative impact of rail on the Greenway is maximizing single-track. Double track is necessary at stations so both east and westbound cars can load and unload simultaneously. However, the MGC believes at least half of the line could be single track while still maintaining the 13-minute travel time. Single track would mean fewer new retaining walls, less pressure to narrow the Greenway and lower cost. The money saved would help cover the more expensive turf track.

Some of the bridges over the corridor will need some upkeep work during construction, but Metro Transit does not plan to move any of the support piles. Thus, the corridor will not get significantly wider. Judging from the renderings, in double track sections, the westbound side of the trail may need to be moved to the north side of the north support pile so that the pile separates the two lanes of bicycle traffic. This would likely require the evacuation of the northern slope and construction of retaining walls to make enough room for the shifted over trail.

Harnik did say that Metro Transit assured them the trail would stay as least wide as the Nicollet choke point. Obviously, both the BAC and the MGC prefer the Greenway stay as least as wide as it is.

The Policy Advisory Committee will vote on the locally preferred option in February 2014, which passes its recommendation on to the Metropolitan Council which ultimately controls the project's fate.

The Engineering Subcommittee also heard a Hennepin County Bikeway Improvement update from Hennepin County Bicycle Coordinator Rose Ryan. Hennepin County is considering a section of Minnehaha by the Franklin Avenue Taco Bell. This would help clean up this multiple intersection cluster. The county is also considering trying to work in a bikeway connection to the MSP airport when it repaves Bloomington Road.

Fawley said Washington Avenue Cycle Track is still on course and he expects the Hennepin County Board to approve it in a 4-3 split decision.

The committee also discussed working with the city to improve snow maintenance on bicycle facilties.