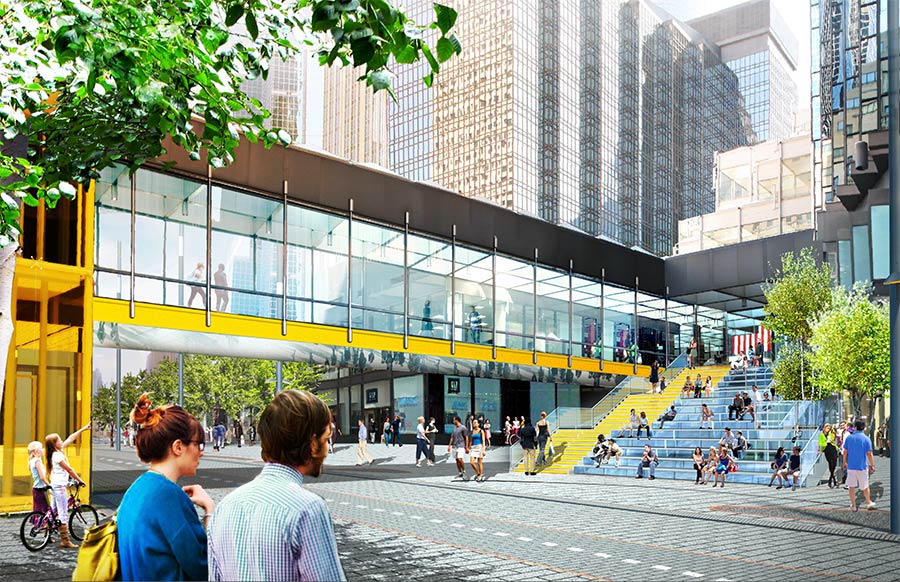 David Frank gave a presentation on the Nicollet Mall redesign (he’s the City’s Project Manager on the redesign) and asked for input from the BAC Engineering Subcommittee at its meeting this Tuesday. In September, the city selected James Corner Field Operations to lead the project after a design contest among several firms. The New York City based firm gained notoriety for designing the High Line linear park in Manhattan.

The firm’s design specified a center cycle track (protected bike lane); although, renderings did not show an actual barrier with bus traffic. This is a bit confusing because the term cycle track by definition is physically separated from motor traffic. Perhaps bollards would have made their sleek renderings look less sleek. However, some form of physical separation for the bike lane is conspicuously absent in an otherwise meticulous design.

After some discussion, the subcommittee passed a motion to recommend a protected bike lane on the Nicollet Mall, whether center or at the side.


Promises of A Streetcar-Friendly Design

The Nicollet Mall is the section of Nicollet from Washington Ave to Grant Ave that is bus, taxi, and bike only. The redesign is expected to cost $50 million, with half coming from state bonding and half coming from property owner assessment. The city also plans to put a streetcar line on Nicollet.

Committee member Ethan Fawley asked if it made more sense to wait until the streetcar line was being constructed to do the Nicollet Mall redesign.

Frank argued the time is ripe now and that the plan is being designed to be compatible with the proposed streetcar. He said the Minneapolis Downtown Council has been calling for the redesign for years.

Committee members did have some concerns with a center lane design. Future streetcar tracks

could be dangerous obstacle for bikers entering or leaving the center lane, particularly in the winter when rails become slippery. Some also feared casual bicyclists would find a center lane uncomfortable to ride.

On the other hand, members liked that a center bike lane would be more removed from pedestrian traffic. Members noted that presently bicyclists on Nicollet have to wary of jaywalkers unexpectedly stepping into their path. Moreover, it would avoid the sticky situation of interacting with busses, especially at stops when they are loading and unloading. A protected bike lane at the side would need to negotiate this bus stop logjam.

One of the big downsides of Nicollet Mall presently is how slow it is to bike. Frank told the committee the designers went with a center cycle track because they thought it’d allow bicyclists much faster commutes through downtown.

Partly because the design didn’t show a fully fleshed out center design, the subcommittee didn’t take a position on a center or side protected bike lane, but some members were very excited about the possibilities of the center design.

The City is hosting an “Ideas and Update” meeting February 19 at Minneapolis Central Library. More details are at nicolletmallproject.com.

The meeting also featured at update on the Transportation Alternative Program (TAP). Steve Hay with Public Works went over the two bike-related projects slated for this year. The city plans to widen and improve the 40th Street Pedestrian Bridge over 35W and rehabilitate two historic bridges over the Midtown Greenway.

Some members worried that rehabilitating bridges over the Greenway might not be the best use of TAP dollars, suggesting money would be better spent on projects that more directly benefit bicyclists. Fawley said he hoped they’d be more proactive this year to get more beneficial projects on the docket.

Ward 5 BAC Member Billy Binder objected to North Minneapolis being passed over again for bike facilities. After a protracted discussion, Binder was able to gain support for Dowling from most of the subcommittee and get it added to the list. BAC members also vowed that the North Minneapolis Greenway remains the BAC’s number one priority.

Peter Wagenius, Policy Director under both former Mayor Rybak and Mayor Hodges, had concerns about adding a Franklin Ave SE bike facility at this time. Wagenius worried the project would serve as a band aid rather than a solution. Wagenius recommended they wait until 2015 to implement a fully thought-out and vetted protected bike lane rather than rushing to tack on a bike lane to a resurfacing project. For more information on ongoing plans for Franklin Avenue SE, read my full post here.

If the Franklin SE delay works out, Dowling would effectively take its place on the list along with five other projects, and everyone would be happy more or less.