Sargent Keith Rowland provided a pleasantly uneventful overview of Minneapolis Park Police activity. He reminded us that Minneapolis parks have been voted number one out of all the park systems in the US, and that the trails are some of the safest parts of the city.

Working closely with the Minneapolis police bike Patrol unit, the park police patrol the parks everyday from noon till 8pm. They are also heavily engaged with the local community and can often be found at Community Recreational centers and local events.

Typically, park police officers report safety hazards, such as dead street lighting or inadequate signage, and handle complaints from the community. The most common complaints center around pedestrian and bicyclists' inappropriate use of trails, paths, or sidewalks. Incidents tend to be isolated, and there are no specific hotspots.

If you have a complaint about Minneapolis parks or trails you can call 911 or contact the Park Police directly at: 612 230 6550. 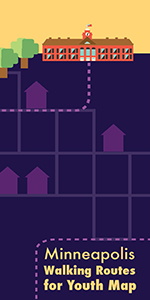 On behalf of the City of Minneapolis, Forrest Hardy unveiled the new bike/walk to school map.

Created in close collaboration with Minneapolis Public Schools this beautifully illustrated, easy-to-read map highlights neighborhood and trail walking routes that are straightforward and safer for children to use to travel independently to and from every school, library and parks recreation center in Minneapolis.

Unexpectedly, the map also shows the location of traffic lights, all way stops signs and flasher signals so parents can help their children formulate a plan for how and where to cross the street.

For most children walking to school will be a new experience, so the reverse side of the map provides essential education and ideas around:

According the map, walking to school is better for children not only because it improves their health, but studies have shown that boosts concentration, and increases independence. It can also have a positive impact on the community by reducing traffic congestion at school start and stop times, and reducing air pollution from cars.

The map will be released this fall, and should be available to children through their schools and local libraries.

Bicyclists should be aware that if this plan is successful, there should be a significant increase in pedestrian traffic around schools in the early mornings and evenings. Although additional signage is planned to alert motor traffic, there is no corresponding plan to alert bicyclists on routes that intersect or are close to bike trails.

For more information about the map, visit minneapolismn.gov/publicworks/saferoutes or contact [email protected].

Minneapolis Bike week is an annual event designed to get new people out and riding. For one week in May, the community is encouraged to participate in activities such as National Bike to Work/School day and other events.

Minneapolis Bike Week was extended to 8 days this year to encompass the over 500 events organized by the Minneapolis Bicycle Coalition (provided staffing and infrastructure) in conjunction with 74 business partners and 37 Minneapolis schools, with the bulk of funding provided by the City of Minneapolis.

According to Program Aid, Nick Olson, engagement in Minneapolis Bike Week reached an all-time high this year with over 10,000 participants -- including 1600 children who either biked or walked to school that week.

This year's event also attracted 6 TV segments -- the most anyone can remember since Minneapolis Bike Week started in 2006.

Planning for Minneapolis Bike Week 2015 is just beginning. Exact dates have not yet been decided although it is possible that it will take place sometime within the last two weeks of May to coincide with key dates (such as Bike to Work/School Day, Cyclofemme, etc.) set aside by the national League of American Bicyclists.

Volunteer participation from members of our community is a key factor in the success of this initiative. If you would like to be involved, contact Nick Olson at [email protected].

Some facts about Minneapolis Bike Week:


City funding has not yet been agreed for Minneapolis Bike Week 2015, so the subcommittee unanimously passed a resolution to recommend it at the next BAC general meeting.

For more information about the 5E subcommittee, visit their website or contact Simon Blenski at [email protected].

The next 5E subcommittee meeting is scheduled for Thursday, November 13th. All members of the community are invited to attend.