This is a guest post by Stephanie L. Rogers, an artist and arts administrator who lives and works in Minneapolis. When she’s not doing art stuff, she’s probably riding her bike or wrenching with Grease Rag.  Photo credits Ethan Turcotte.

This past summer, two sets of bike racks were installed along Chicago Avenue in South Minneapolis, a major commercial corridor that previously had far too few places to lock up. Another set of racks is slated for installation when spring finally arrives.

In many ways, the process of getting more bike parking on Chicago Avenue looks a lot like previous efforts by members of the Minneapolis Bicycle Coalition – a small group of people focused on an area, petitioned local businesses, and was rewarded with a safe place to lock up. This group also had the added challenge of finding funding and applying for permits.

The racks themselves, though, are the work of metal artist Kelly Brazil, and they look totally different. Brazil has been recycling found metal scraps into functional art for more than a decade. When Pillsbury House + Theatre put out a call for public art projects two years ago as part of their Arts on Chicago initiative, Brazil saw an opportunity. [Full disclosure – I received grant funding from Arts on Chicago for a different project]. Having lived in the Powderhorn Park Neighborhood for eleven years, Brazil had experienced the problem first hand. “The increase in biking here, just in the neighborhood, has been incredible. Everyone in my house bikes, my neighbors bike, but there’s never enough places to lock up.”

Brazil partnered with Loren Ziemek and Angie Raschio, who have both worked at Full Cycle, and with the Chicago Avenue Fire Arts Center (CAFAC). Ziemek and Raschio took welding classes at CAFAC and, with guidance from Brazil, bike racks began forming in the Center’s workshop space. CAFAC artistic director Heather Doyle and Mike Hoyt from Pillsbury House + Theatre coached the team through the public permitting process, which included site plans, diagrams, encroachment permits, and a presentation to the City of Minneapolis Public Arts Advisory Panel. 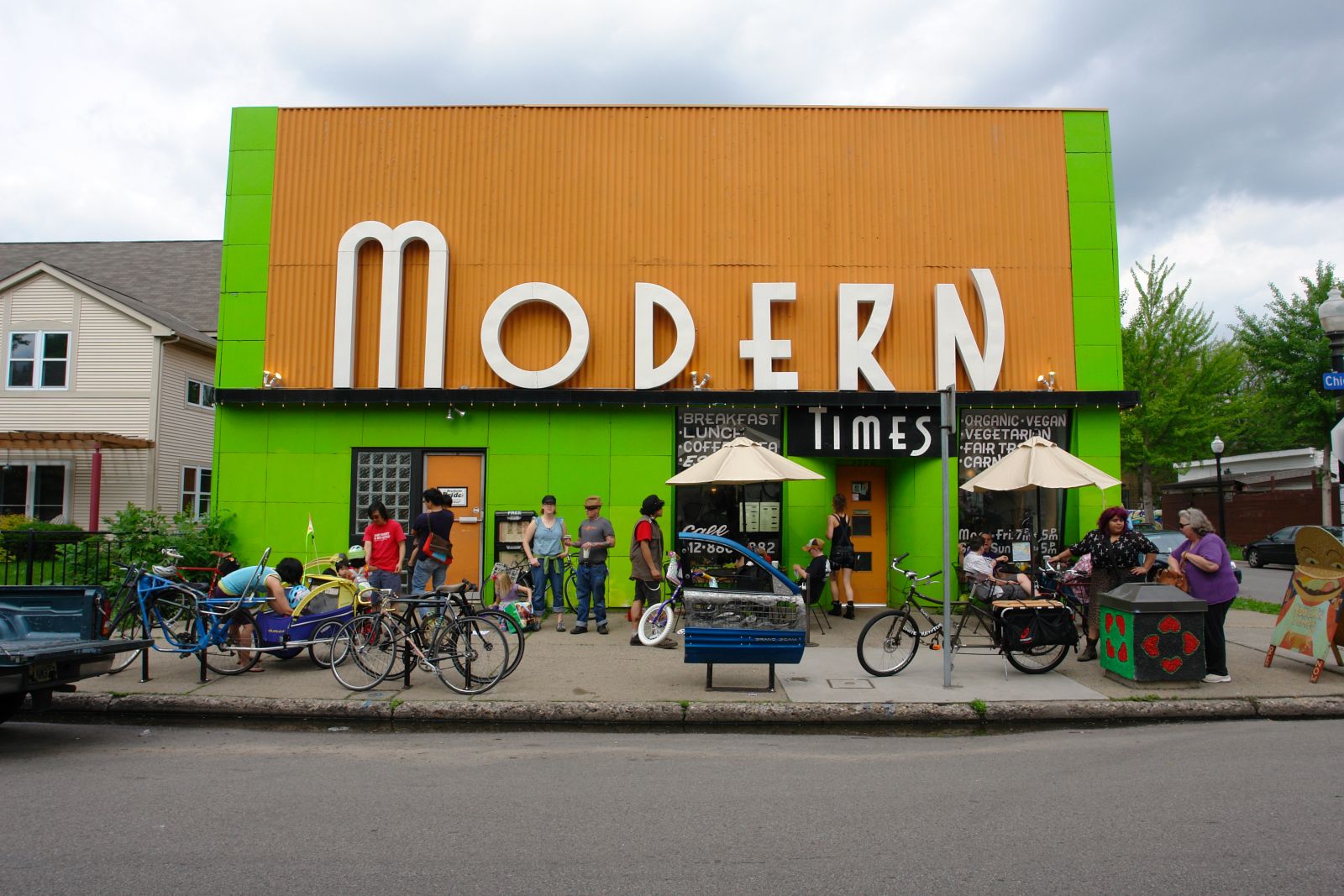 The public was welcomed to CAFAC to try out the racks, and people came, bringing with them their weirdest shaped and hardest-to-lock bikes. Brazil notes that creativity doesn’t just stop with the manufacturing process, saying, “I am amazed at how creative people are with how they lock their bikes. I got a text from Dara (co-owner of Modern Times Restaurant, which has three of Brazil’s bike racks in front of it) saying ‘there are seven bikes locked to your bike rack right now.’” The racks have made a difference for small businesses along the corridor, including Café Southside near 34th Street, where Brazil’s sculpture functions as both a bike rack and outdoor seating.

My own first experience of this corner of Minneapolis was the annual MayDay parade, the pedal powered community-produced art event that culminates with a celebration in Powderhorn Park. I now live, work and play in the area (Powderhorn and connecting neighborhoods Central, Bryant and Bancroft), but I still think of this part of Minneapolis through the lens of MayDay. These are neighborhoods where outside-the-box thinking, community engagement, and a strong reuse ethic form a collective aesthetic as well as a shared value system. The new bike racks fit in perfectly, and Brazil is planning on applying for more funding to build more racks. 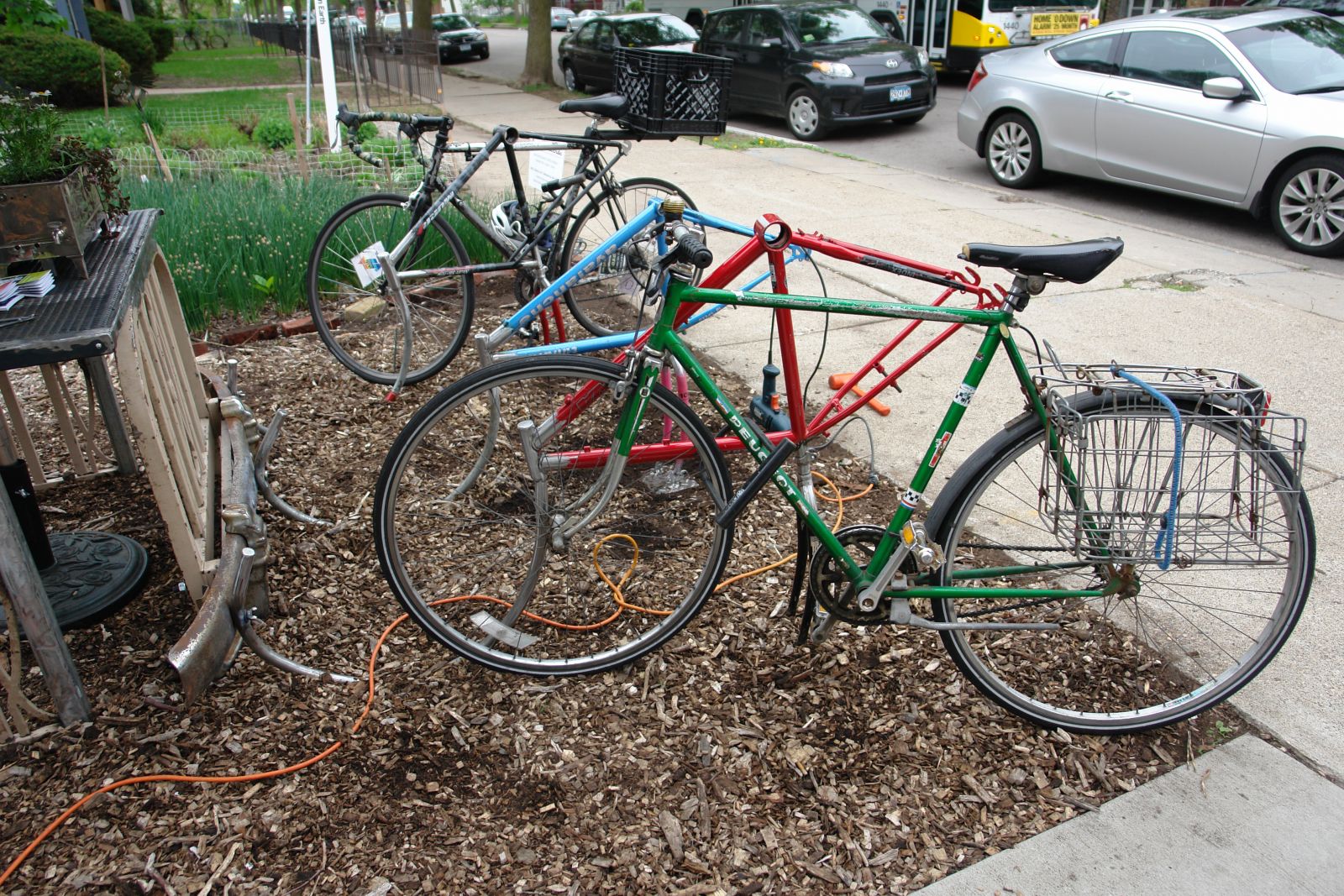