An In-Person Review of Cycletracks 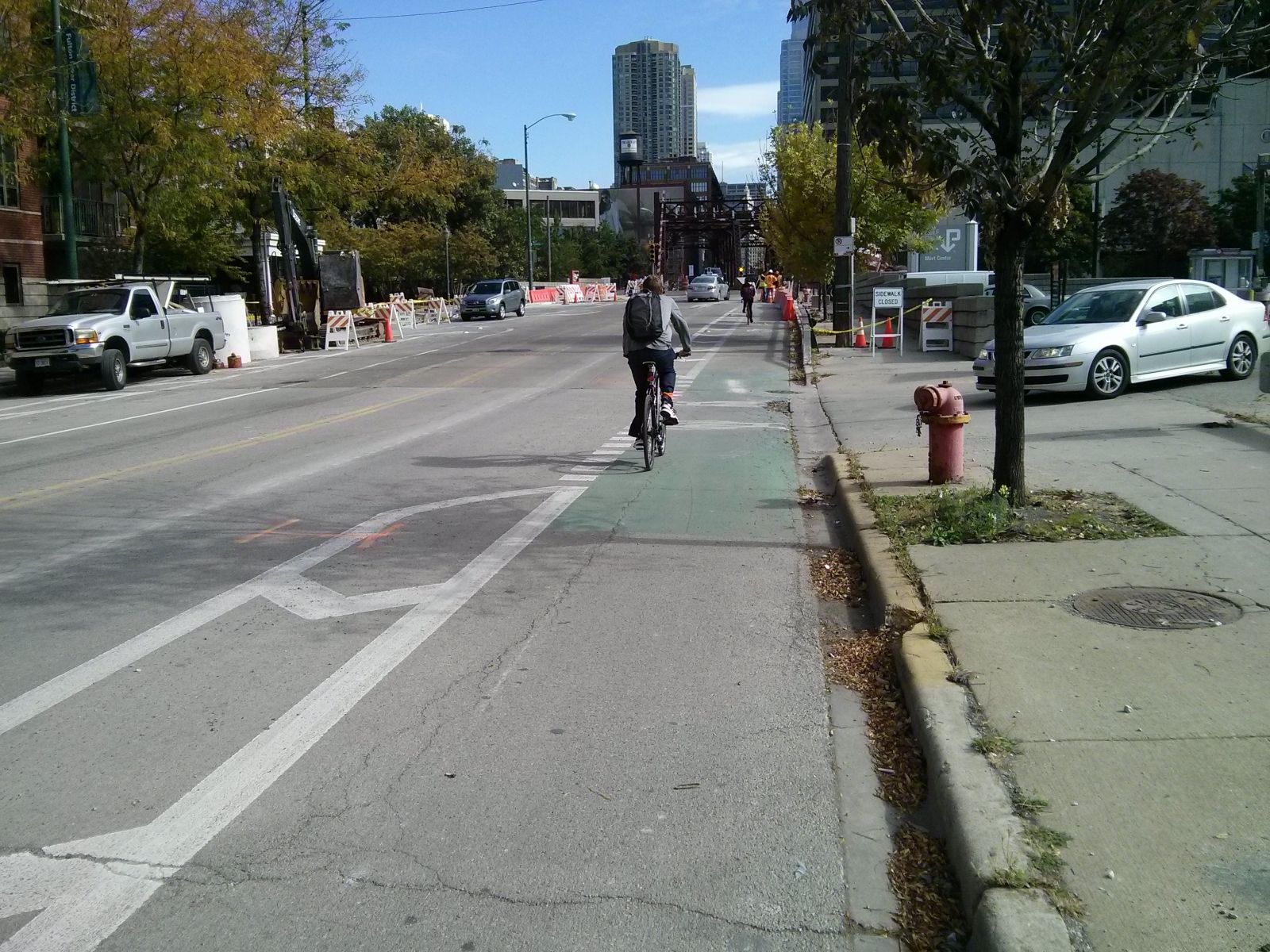 I recently had a chance to test out a contentious type of bike infrastructure, one much-discussed on this site.

One of my volunteer gigs is as the volunteer who coordinates volunteers for the Minneapolis Bicycle Coalition. I don't decide what the Coalition might advocate for, but I do end up telling people about protected bikeways. “We're advocating for dedicated bike facilities with some sort of physical barrier between cars and people riding bikes.” That ranges from something like the Midtown Greenway to a cycletrack.

It's been fascinating to watch people respond to the Bikeways for Everyone campaign, especially this year when most of the focus was on cycletracks on Minnehaha and Washington. 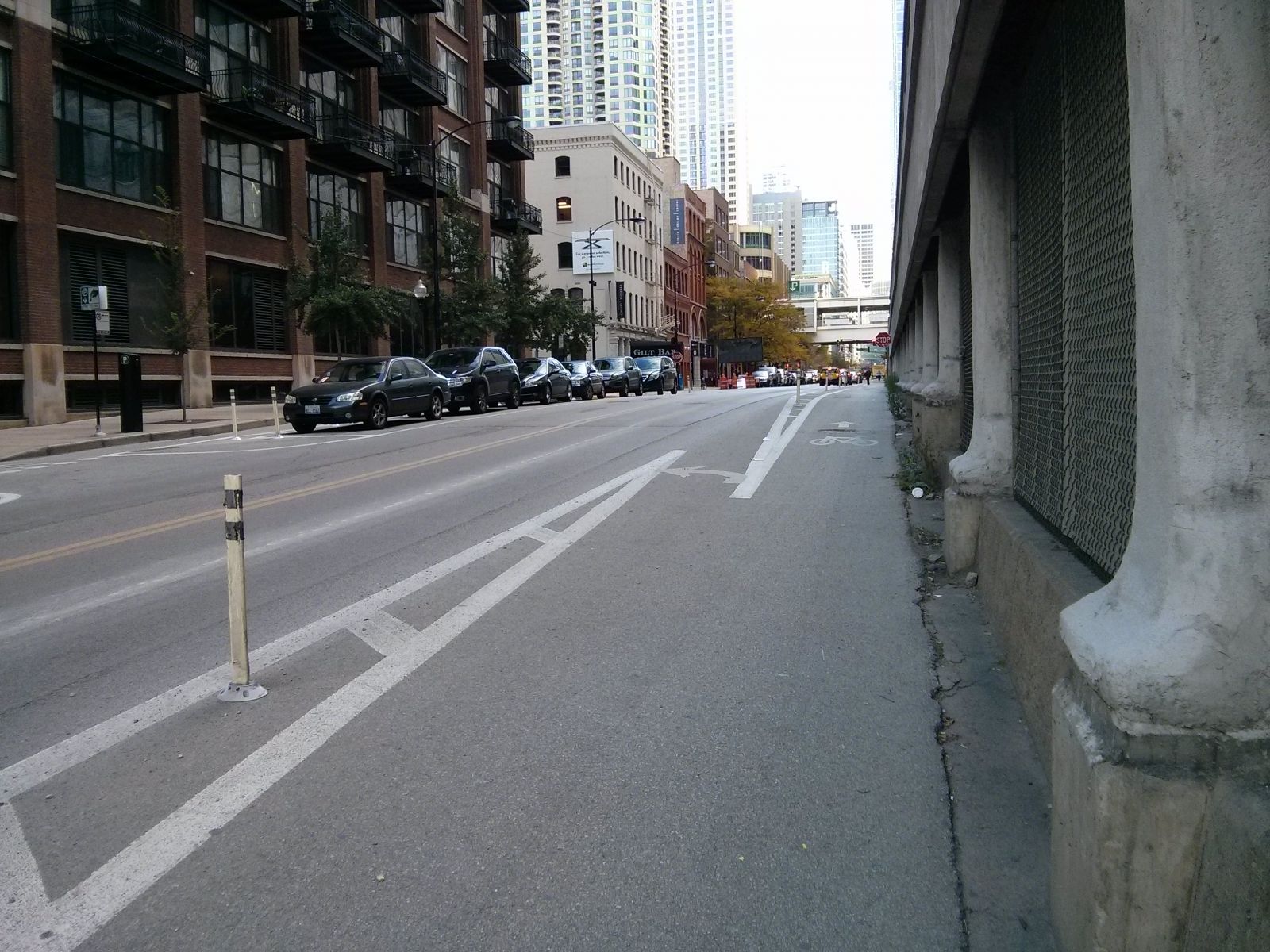 Mostly, people (the normal, on-the-street-kind) love the idea. Me, I'm confident enough on a bike that I can ride anywhere downtown Minneapolis during rush hour, although I'll ride twice or even three times as far to avoid the unpleasantness. I understand the fear of having cars zooming past the bike lane, possibly from escorting my mom from Uptown to Downtown, or my niece to dinner. Or, because even though I do it with confidence, I also find it scary.

On the other hand, some very dedicated, long-term vehicular cyclists are ADAMANTLY opposed. I understand the concerns about being visible at intersections to turning car drivers. I've already heard predicted resentment about having to ride behind slow people. I've been unclear why the visibility problems can't be solved with smart design, though. (I'm not very sympathetic about the “I'd have to ride slow!” argument, though – ride in the driving lane.)

Personally, I'd never ridden on a protected bikeway in the US, and I was unsure whether my Amsterdam experience translated to Minneapolis. Lucky for me, work took me to Chicago last week, so I grabbed a bike and went to test them out.

I was a bit overwhelmed trying to safely navigate somewhere new and busy, even at a slower-than-usual pace. Where are the lights? Can cars turn across the lane here or not? Where do I look for traffic with this curb cut? Where should I eat lunch? Is there right on red? Are those pedestrians crossing or just waiting for the light in cycletrack? Wait, why did this bike just shift on me? Where is Kinsey Street? It made for a pretty overwhelming ride. 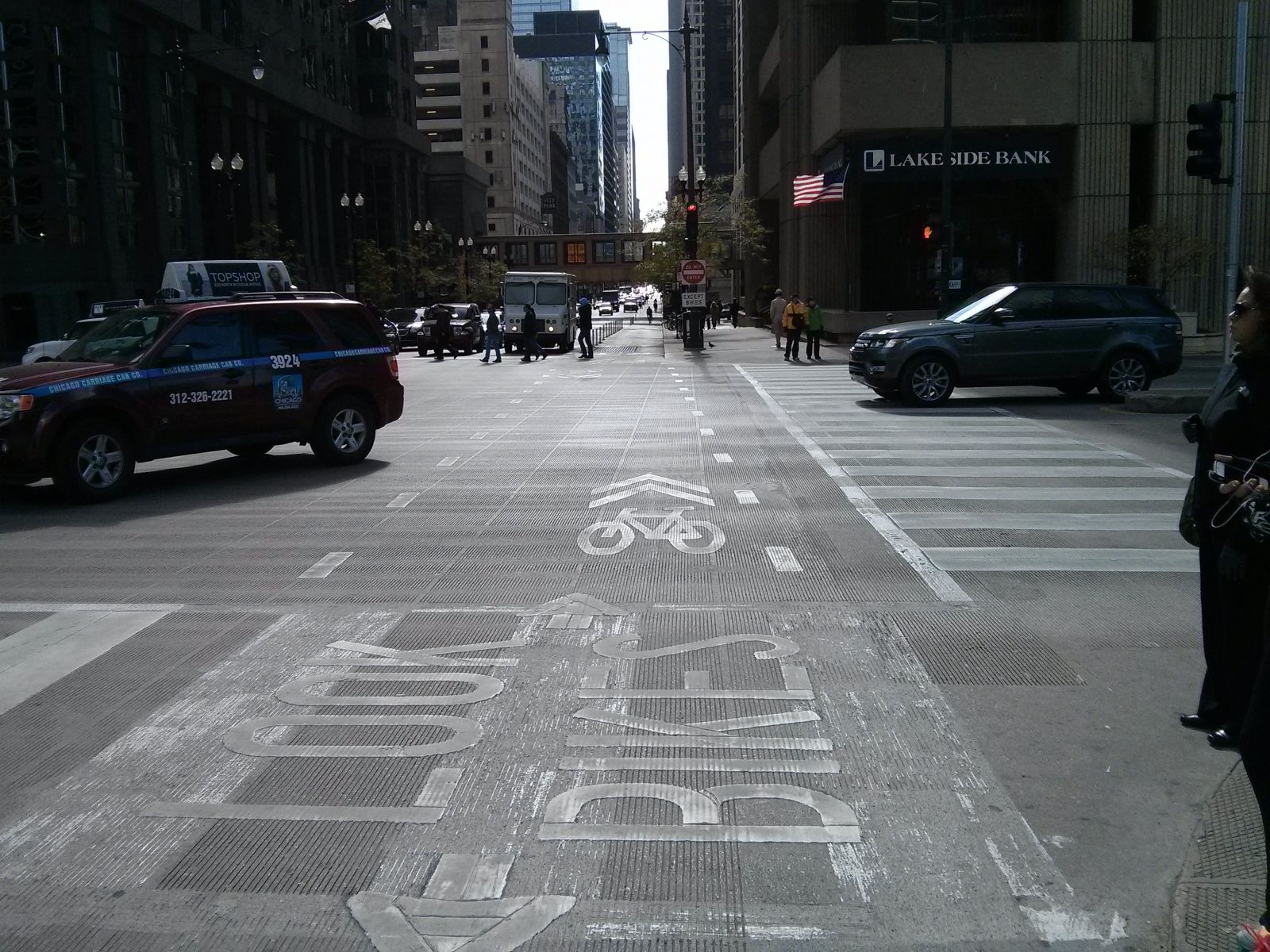 Navigating that strange city, I managed to ride in one two-way cycletrack, and in one that was a lane each side of the street. I found that riding with a buffer space, a few plastic bollards, and a row of parked cars between me and moving traffic felt very civilized. Maybe it felt civilized because it gave me slightly less to keep track of. But the stress of riding next to zooming cars just wasn't there, the way it is in bike lanes.

I didn't have to worry about whether cars were pulling into or out of parallel parking spots. Or whether someone was double-parked in the bike lane – it's amazing how few bollards it takes to get compliance on that one! 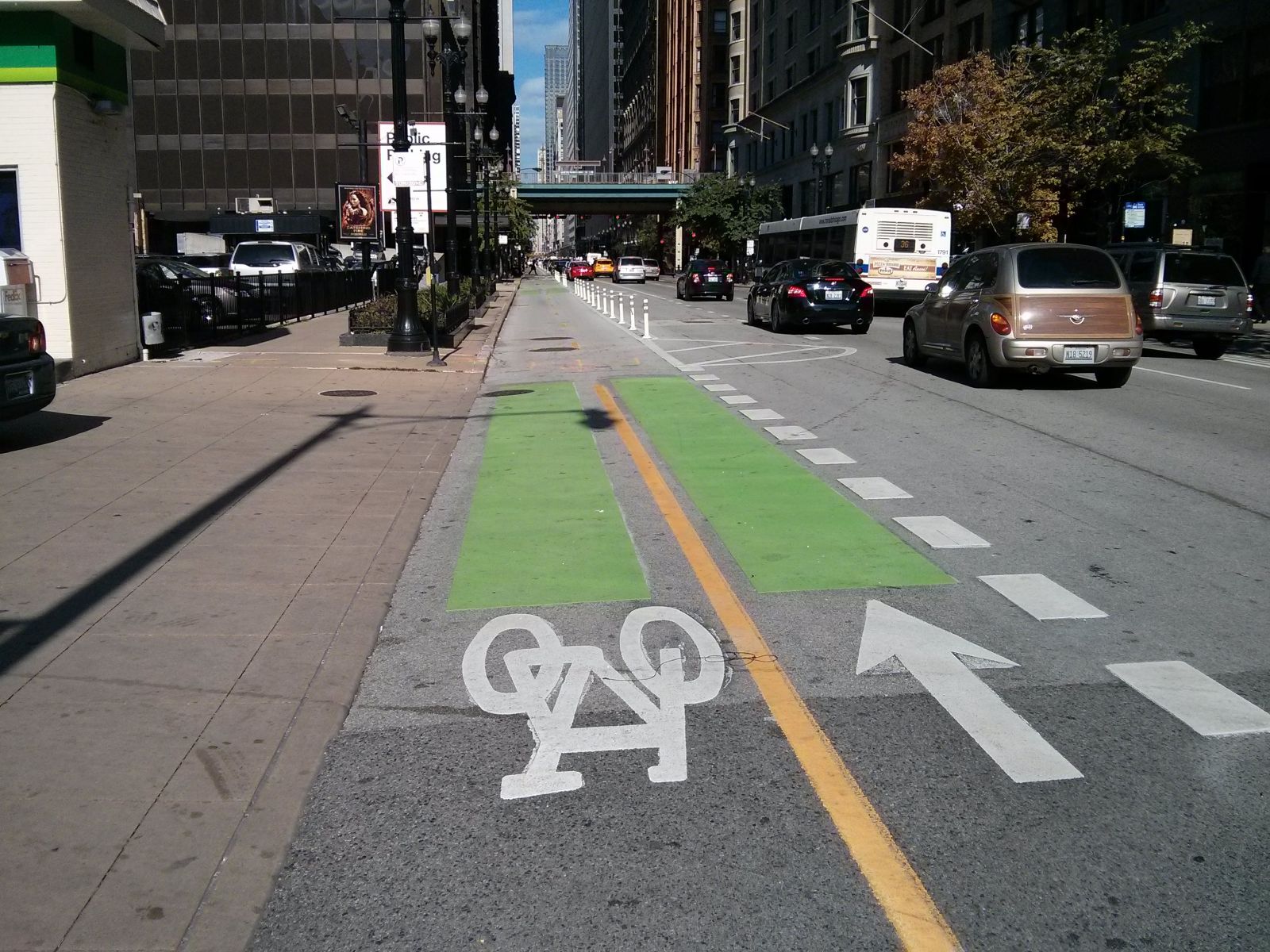 All the curb cuts were thoughtfully marked in bright green, easy for me to notice. (I suppose that green might have signaled something to the drivers, too, eh?) The intersections had bike lights, with an additional light cycle to avoid conflicts between cars and bikes. 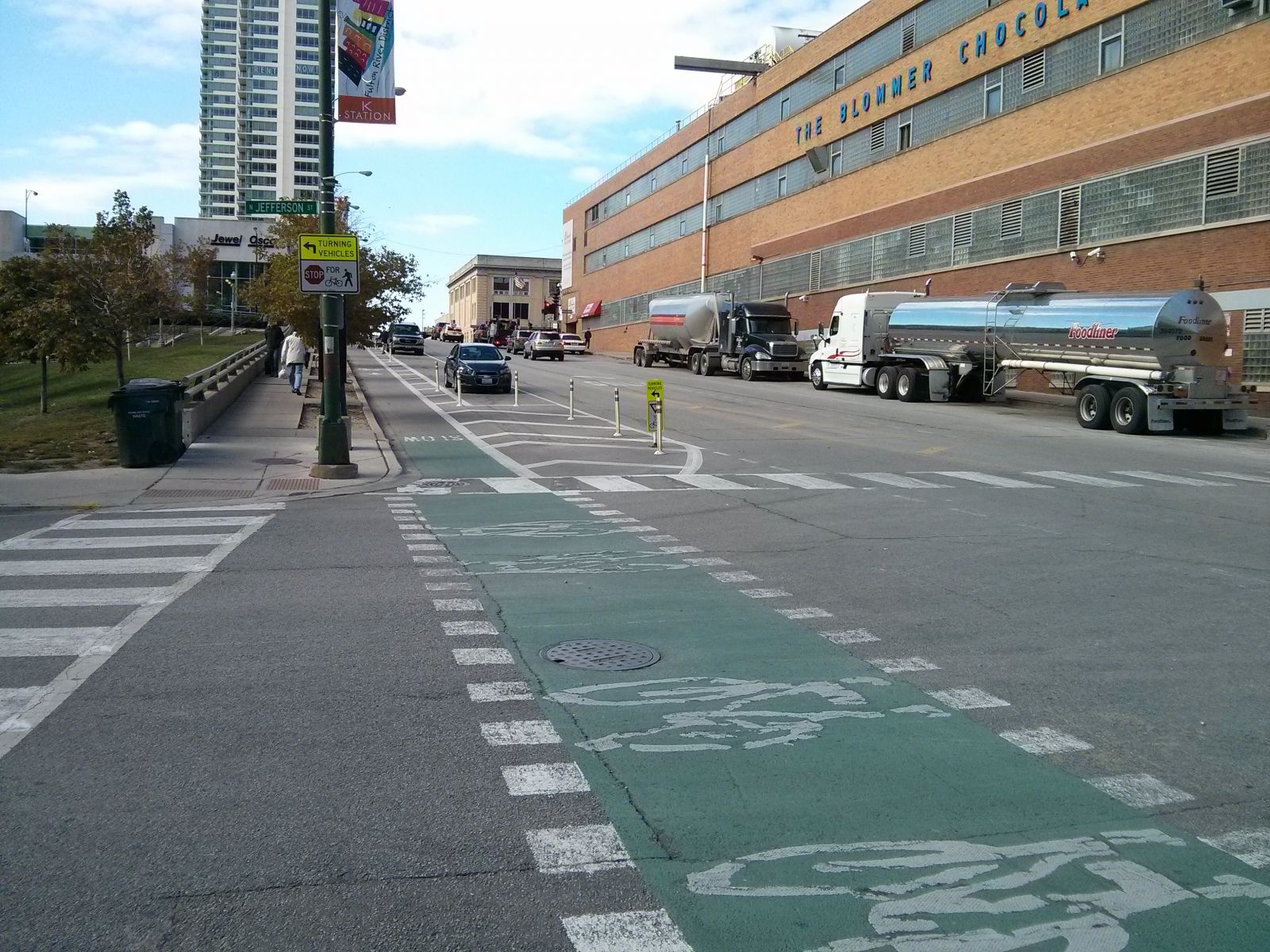 Where there weren't lights, the parallel parking stopped a significant distance from the corner, the green paint- and bollard- area grew wider, and I felt plenty visible as all the drivers made eye contact with me as we neared the intersections.

Even knowing the concerns about cycletracks and looking for problems, I was impressed.

BTW, And for those who don't want to go slow, while the lanes on the two-way cycletrack were narrower than I would have liked, there was plenty of space to pass.

This is cross-posted at Streets.MN.