Why should the ancient world have all the fun?

We in Minneapolis have more than Seven Wonders. How about a bike tour to show them off to visitors?

To  keep it simple, I’ve been thinking of sites that are easily accessible by bike, and lend themselves to a quick “fly-by”; i.e., they don’t require cyclists to stop, lock up their bikes, and spend money.

As big as it is, rumor has it that it was originally conceived of as an actual bridge. (Even conceptual artists have to make compromises sometimes.) Visitors often take selfies with one hand raised as if it were supporting the cherry. The Walker Art Center’s Sculpture Garden in general is a popular destination for wedding parties and school trips, as well as art lovers. (Note: Please walk your bikes in the Sculpture Garden.) 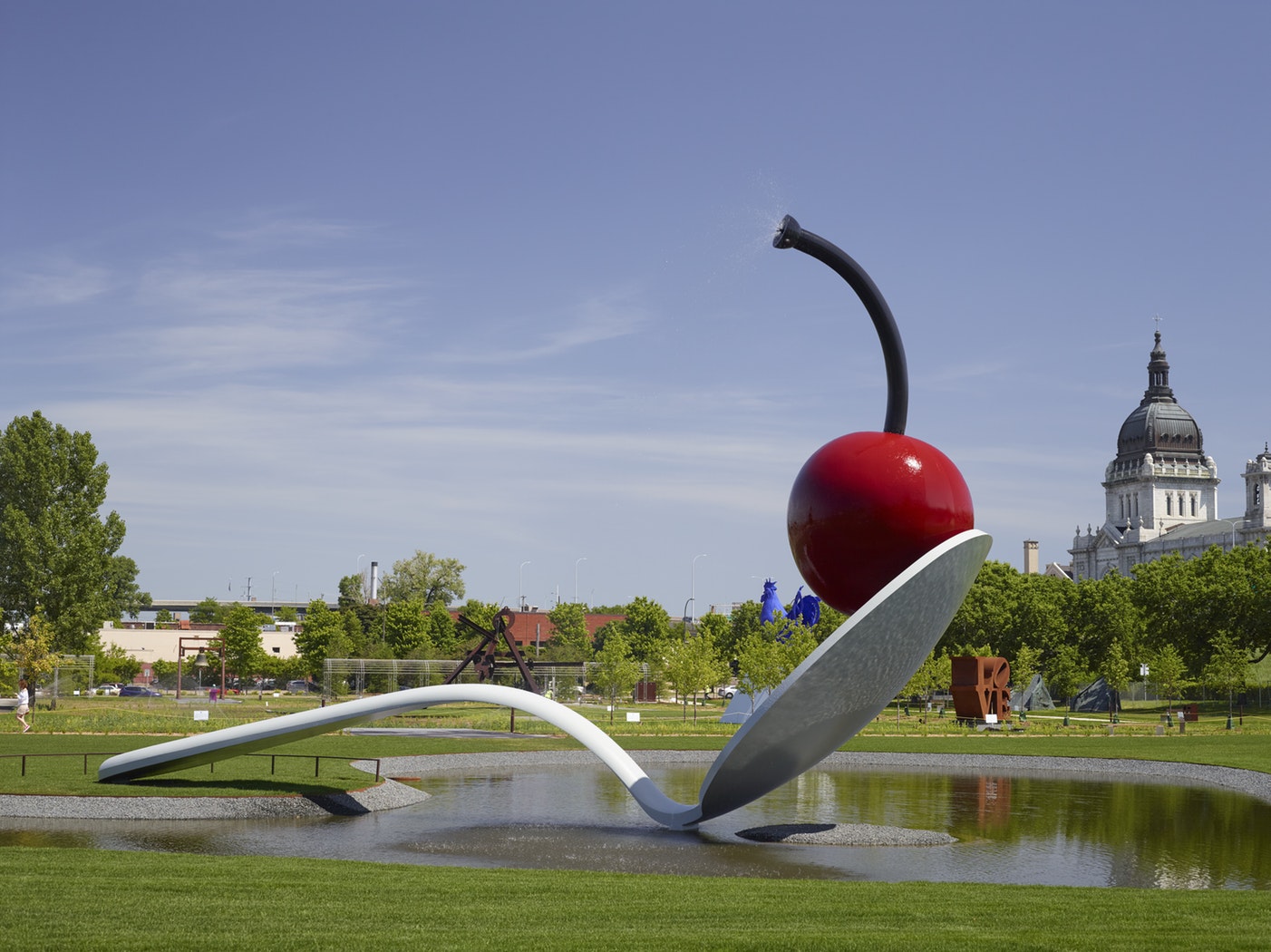 Hop back onto Vineland Place, take the bike lane across Lyndale/Hennepin, and you’ll find yourself at another iconic Minneapolis destination. Loring Park is home to festivals such as Pride, Artists’ Festival, and Holidazzle with its own skating rink. The famous Dandelion Fountain appeared in a Science Fiction/Fantasy novel, War for the Oaks, by local author Emma Bull. (Personally, I always wave to the statue of my first cousin five times removed, the Norwegian violinist Ole Bull, near the Minneapolis Community and Technical College. But that’s just me.)

Photo via Minneapolis Parks & Recreation Board

Follow Grant St. east a couple of blocks and make a left. Now you’re on another famous Minneapolis destination. After two long years of renovation, Nicollet Mall is once again open to bikes, buses and taxis, but not cars. Ride north past Orchestra Hall and Peavey Plaza, the IDS Center, the Mary Tyler Moore statue, and the Minneapolis Central Library. 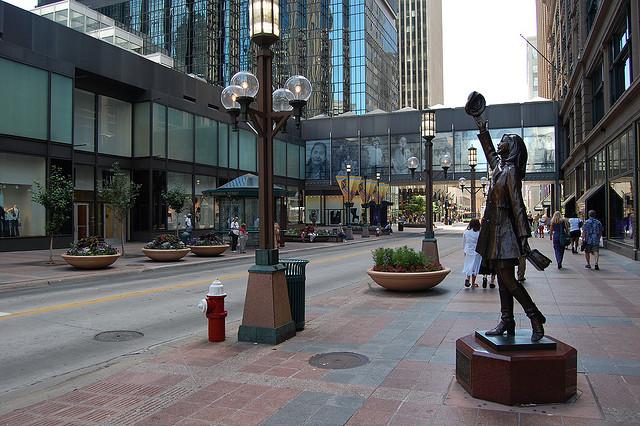 Turn left (west) to Hennepin, then right (north) to the turnoff for the river, and take the bike path heading east. In a few blocks you’ll arrive at the historic Mill Ruins Park at St. Anthony Falls. The Stone Arch Bridge is a popular walking and biking route, but for now we’re going to stay on this side of the river. 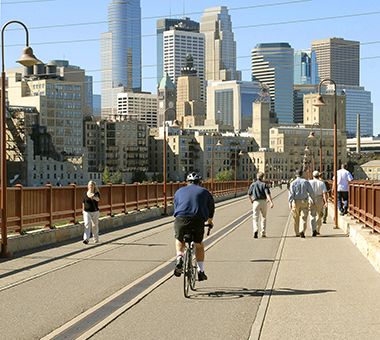 Continue east along the boardwalk and head up the hill. On your right you’ll see the Guthrie’s new (as of 2006) digs, with its “Endless Bridge” extending toward the Mississippi and murals overlooking the bike path. 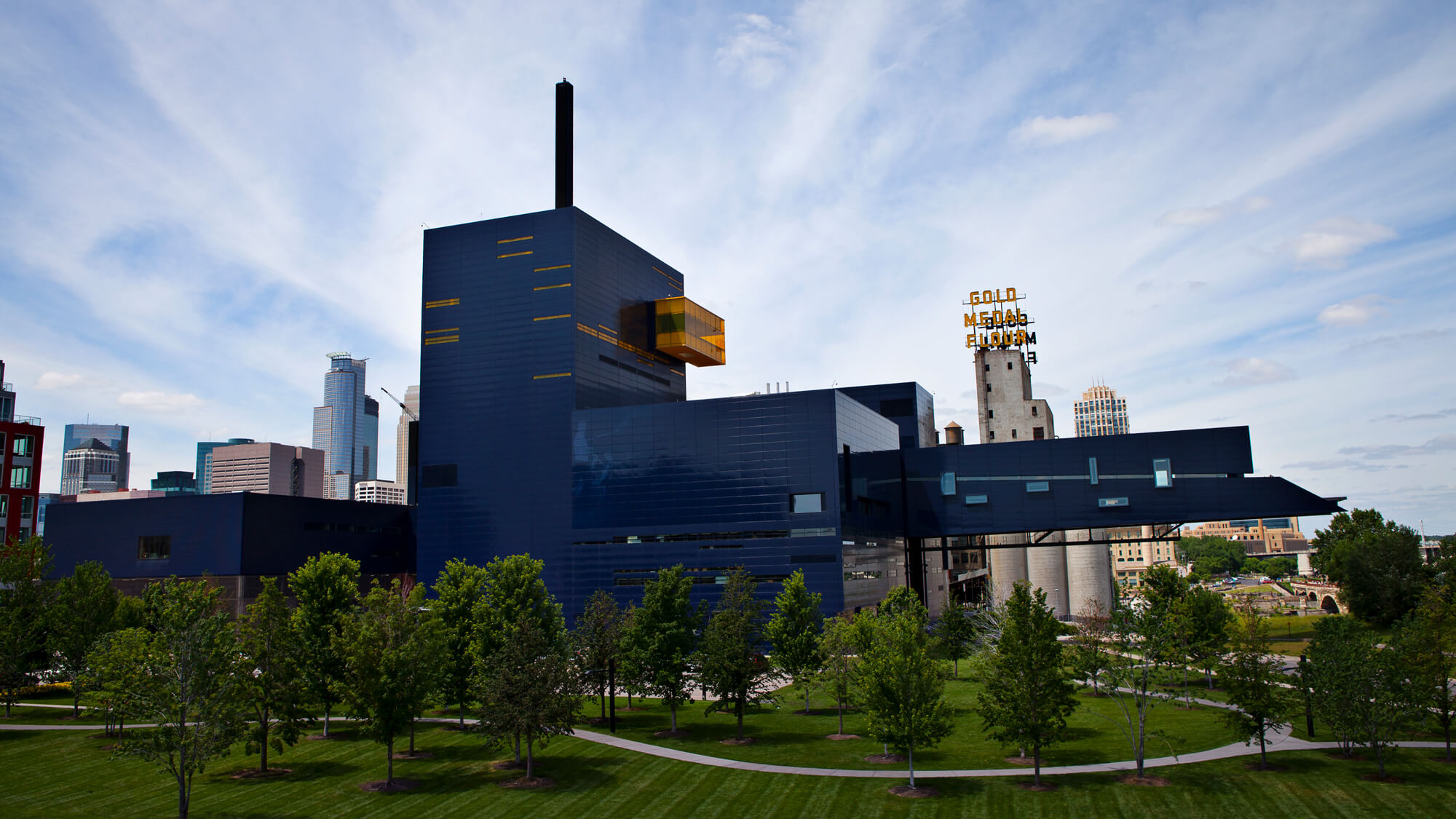 Now you get to stretch your legs a bit. Take the bike path next to West River Parkway east and south for 6.3 miles. At the entrance to Minnehaha Park, turn left and pass through the parking lot to Minnehaha Falls. Nearby you can see the sculpture of Hiawatha and Minnehaha by Jakob Fjelde (also of Ole Bull fame) depicting characters from the poem “Song of Hiawatha” by Henry Wadsworth Longfellow, and a 2/3 scale replica of Longfellow's home in Cambridge, Massachusetts. In the pavilion you can buy ice cream, etc. as fuel for the rest of the tour.

Take the bike path west, across the bridge over Hiawatha Ave., turn north along the Hiawatha LRT Trail, and west following Minnehaha Creek. Now you’re set to tour the lakes: Hiawatha, Nokomis, Harriet, Bde Maka Ska (formerly Calhoun), and Lake of the Isles. You can even bike past the Mary Tyler Moore House at 2104 Kenwood Pkwy. If you like, it’s close enough to the Spoonbridge and Cherry that you can come full-circle. 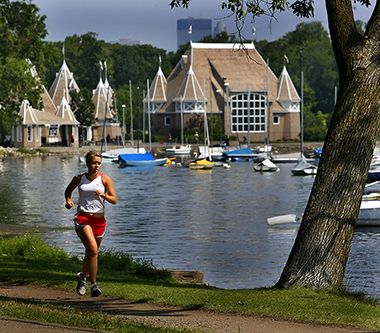