“Complete Communities" in the University District with Gil Penalosa

“The worst thing that ever happened to Minneapolis was being named the second best bicycling city,” Gil Penalosa Executive Director of 8-80 Cities, told a room of people at the Weisman Art Museum yesterday morning. Stop comparing yourselves to Houston and start comparing yourselves to Copenhagen, he urged. The man who built more than 200 parks in Bogota, Colombia and started the world-famous “new ciclovia” program wants us to be more ambitious, go figure.

Penalosa’s inspirational talk was a part of an event, “’Complete Communities’ in the University District: A Forum with Gil Penalosa,” which featured Minneapolis Bicycle Coalition’s Director, Ethan Fawley and a number of panelists from the University of Minnesota – Twin Cities who are experts in the transportation, engineering and planning. The combination of international and local perspectives led to a enlightened discussion about how biking and walking could increase livability in the University District and set an example of a ‘complete community’ for the rest of Minnesota. Keep reading for highlights from the event. 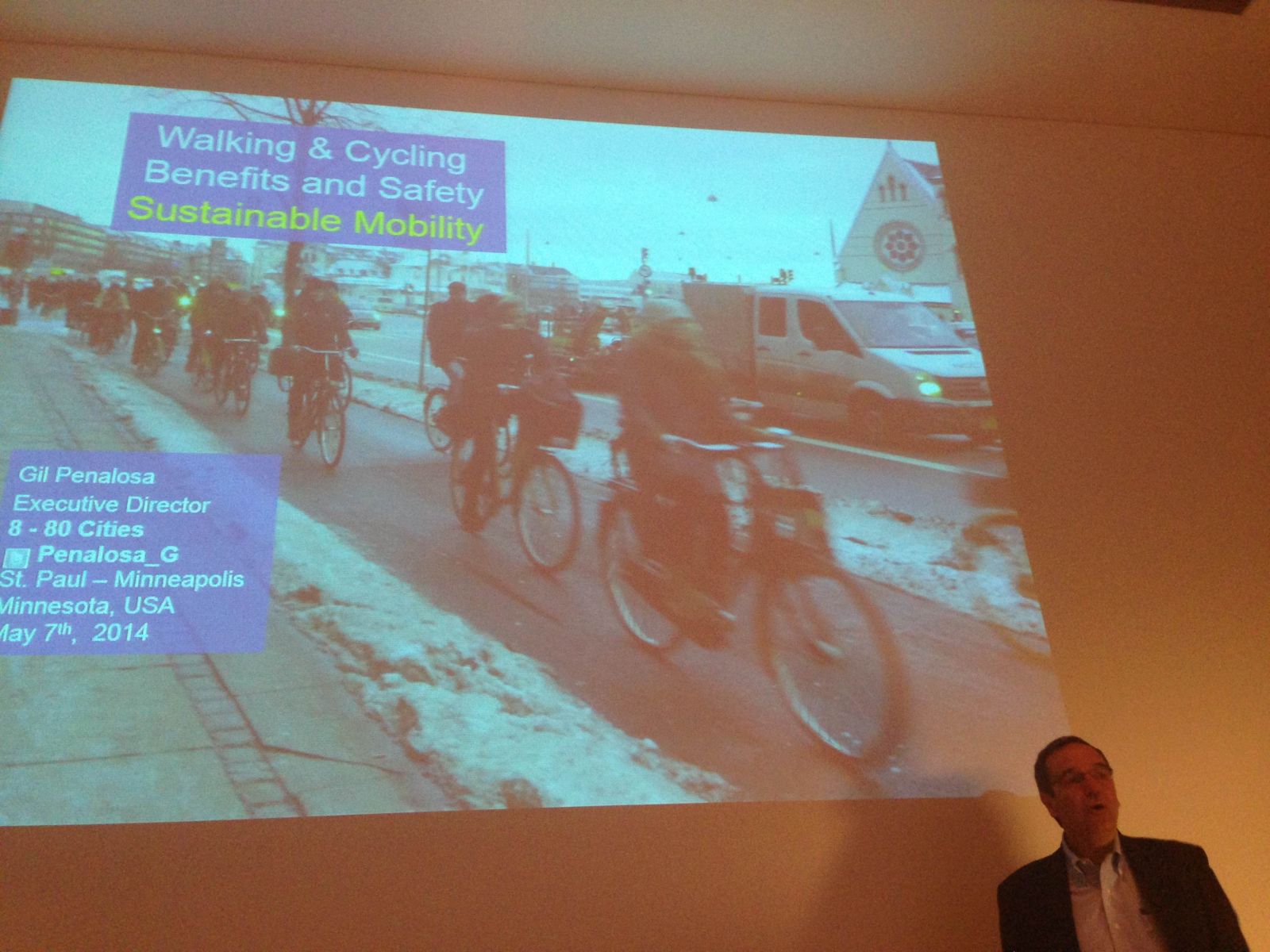 Why is it so hard to prioritize cycling and walking?

Instead of blaming unfriendly laws and regulations, lack of money or lack of interest as the barriers that hold back cycling and walking, Penalosa said the problem is political and requires a community-wide response. In concrete terms, he suggested two immediate measures to encourage non-cyclists onto bikes, 1) lowering speed in neighborhoods and 2) creating a minimum grid of protected bikeways, which the Coalition is working to support through the Bikeways for Everyone campaign.

Penalosa acknowledged that enforcing lower speed limits only on select streets is difficult and suggested the better solution is to address the entire community and lower speed on ALL neighborhood streets so 20 miles per hour becomes the default speed. This speed is desirable because the risk of death to pedestrians and cyclists in collisions where cars are traveling 20 mph is about 5 percent. Increased speed dramatically increases the risk of death.

Without authorization from MNDOT, Minnesota cities do not have the power to lower speed limits below 30 miles per hour, except on streets with bike lanes. On these streets, speed may be lowered to 25 miles per hour. State control of speed limits is also the norm in other places, but California and Massachusetts have recently passed laws allowing local jurisdictions to lower speed to 25 mph on residential streets. In New York a bill has been proposed that would allow cities to set local speed limits. In addition to changing Minnesota state law, Fawley pointed out speed limit could be addressed in the immediate term by lowering to 25 on all Minneapolis streets that have bike lanes.

When homes and destinations are connected, it is easy to ride a bike. In Copenhagen, studies revealed people ride bikes because it is fast and convenient. UMN-Twin Cities has been recognized as a Gold Bicycle Friendly Business by the League of American Bicyclists, but the heart of the UMN Campus is hemmed in by freeways, the river and University Avenue, which means getting to campus safely is a challenge. It was pointed out that a clear central connection between the state’s two biggest economic engines, the campus and downtown, is currently lacking.

Penalosa emphasized connectivity over technicality in creating a minimum grid and discussed former New York City Transportation Commissioner Janette Sadik-Kahn’s embrace of pilot projects. Using a pilot Sadik-Kahn transformed Times Square and created hundreds of projects around the city experimenting with different types of barriers to create protected bike lanes. Minneapolis and Hennepin County are updating bicycle master plans to include on-street protected bikeways, which were recommended in the 2013 Climate Action Plan. The Climate Action Plan calls for creating a 30 new miles of protected bikeways by 2020.

Greater cooperation between the University and outside stakeholders could improve safety and connectivity on the trip to campus. One opportunity for collaboration is University Avenue, which is a Hennepin County Road from the border with Saint Paul to 35-W. Better maintenance of connections to campus is also essential. As Levinson pointed out, most of the school year takes place during the winter months and more reliable snow removal is necessary to encourage year-round cycling.

Fawley called for a consistent and ambitious message from University leadership about cycling, i.e. we are gold but we’re going for platinum. Fawley said that he envisions the University District neighborhoods Marcy-Holmes, Prospect Park, Como and Cedar-Riverside augmenting their neighborhood identities by embracing the role of connectors. Levinson pointed out the potential that stems from the university being “young of mind.” Penalosa concluded by giving five steps for generating a community-wide response that can overcome political barriers, 1) creating a sense of urgency, 2) political will, 3) leadership, 4) doers and 5) public engagement.

The forum was sponsored by the University District Alliance, UMN Parking and Transportation Services, the Minneapolis Bicycle Coalition and UMN Capital Planning and Project Management. Penalosa’s visit to the Twin Cities was part of the Third Annual Placemaking Residency sponsored by the Saint Paul Riverfront Corporation.