In collaboration with the City of Minneapolis and Hennepin County, MnDOT recently installed temporary pedestrian safety improvements on Olson Memorial Highway. The changes fall far short of the safety improvements that the community has been demanding as part of the Bring Back 6th vision.

MnDOT, the City and County are intentionally setting up this project to fail. Instead of re-striping the roadway to add dedicated bus and bike lanes, the road space from the removed travel lane will sit empty during the three month project period. They also will not be adding artwork crosswalks, better street lighting, and safer speed limits, all which are proven to reduce crashes and improve accessibility.

As a result, Olson Memorial Highway continues to be inaccessible and unsafe. The temporary changes won’t meaningfully improve safety or multi-modal access. However, they will add disruption and confusion to a community that has been consistently harmed by transportation decision making.

Additionally, we learned that City of Minneapolis Public Works & Vision Zero staff, with no transparency and public explanation, requested that MnDOT remove a proposed bike lane from the pilot project. Staff justified this decision by saying that the proposed bike lanes would have been unsafe and that they support a future bikeway along Olson, potentially in 2023.

This reasoning doesn’t add up. The fact is that biking on and across Olson Memorial Highway has ALWAYS been unsafe. Olson Memorial Highway has long had one of the highest crash and injury rates in the City. The absence of bike lanes doesn’t make people safer. It simply restricts transportation access and forces people who do need to bike on Olson to choose between the sidewalk or putting themselves in harm's way on the street.

This decision undercuts the City’s Vision Zero policy, which aims to eliminate all traffic deaths and serious injuries on City streets before 2027. Olson Memorial Highway is a high injury street and contains multiple intersections that rank among the highest crash rates in the City.

The Near North community was the first community intentionally selected for disinvestment, displacement, and destruction as a result of the racist collaboration between the City and State Highway Department to build highways through African American communities. Since then, time and time again, the Near North community has had to wait for basic safety and transportation improvements.

It is unacceptable for a City of Minneapolis staff member to request further delaying improvements without explanation or public awareness. Every day, people walk, bike, roll, drive and take transit on and across Olson Memorial Highway. Each day that improvements are delayed is another day that they are put at risk.

The requested improvements could be implemented in a matter of weeks. This is why we are asking the City of Minneapolis, MnDOT, Hennepin County and other highway decision makers to immediately implement the full list of phase 1 safety improvements to improve safety and transportation access now as we collectively build toward a restored 6th Avenue N to achieve reparative justice for the Near North community. 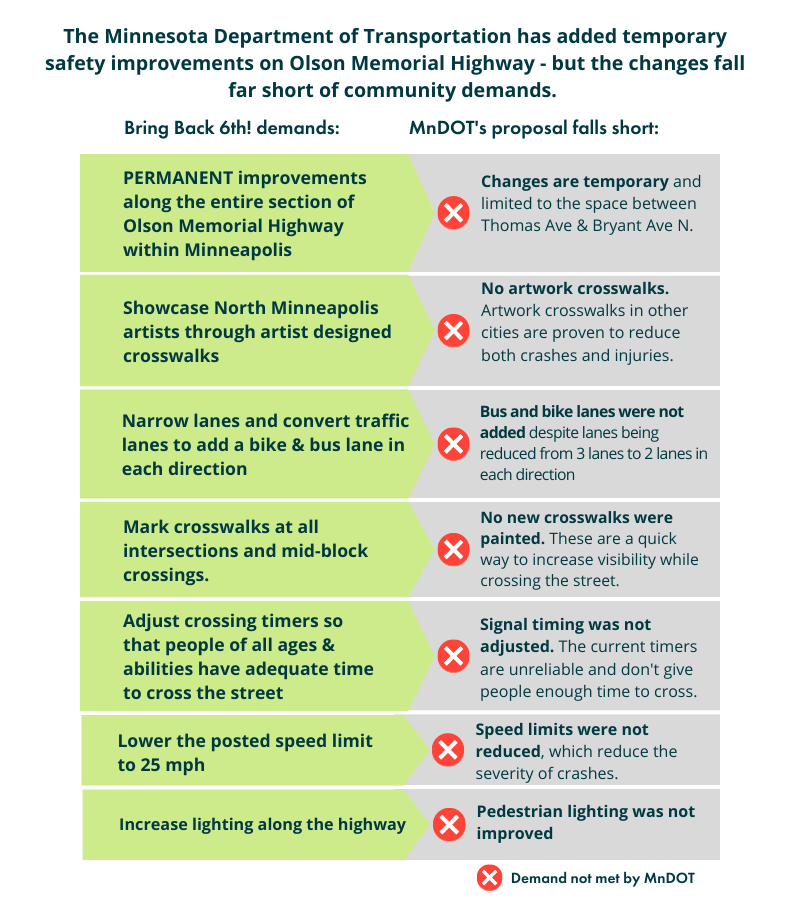 There are four ways to take action today to support Bring Back 6th! 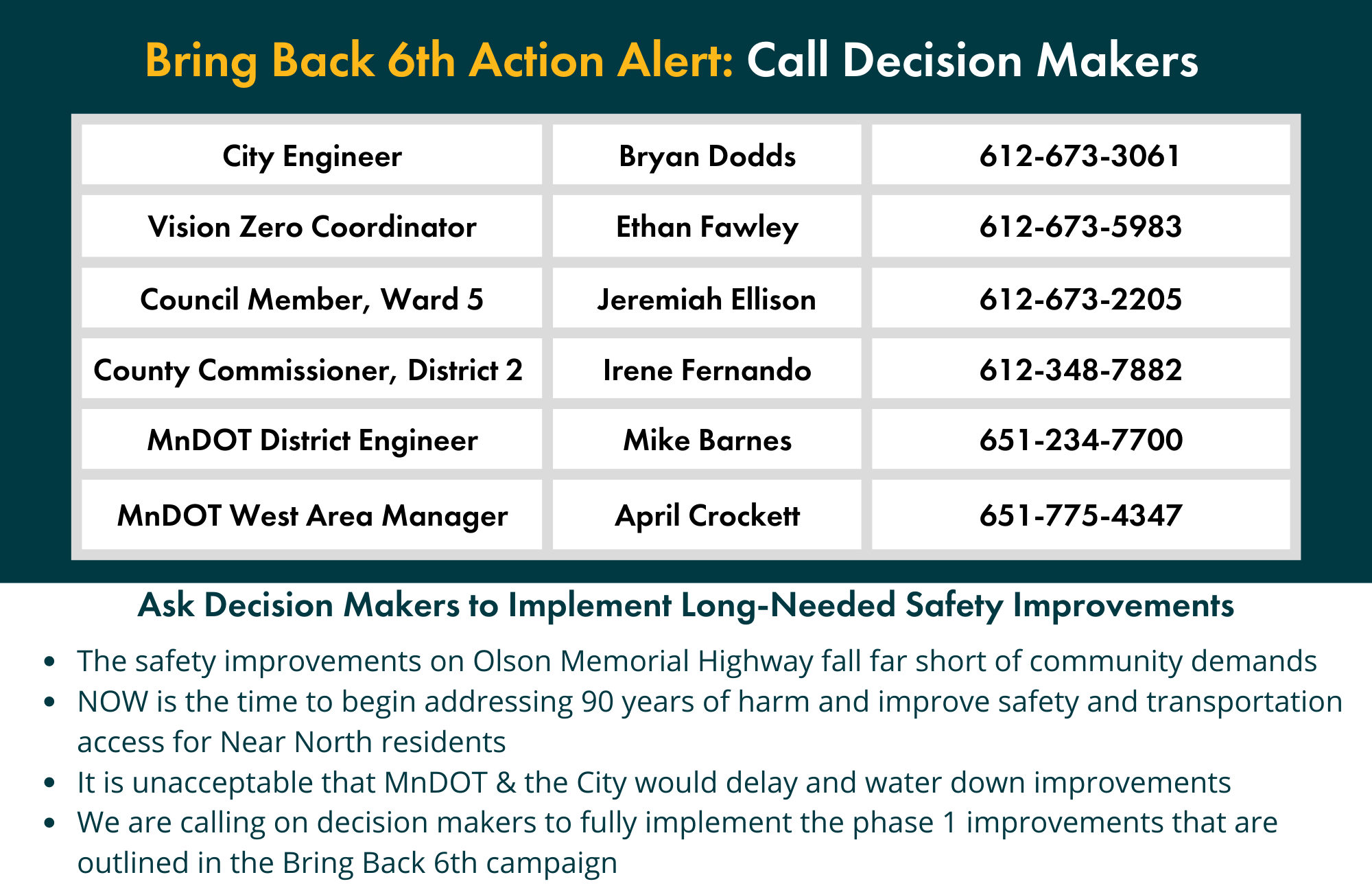 MnDOT has created a survey to collect feedback on the temporary improvements. The Survey will ask information about where you live, how you get around, and your thoughts on MnDOT’s Olson Memorial Highway Pedestrian Safety Project.

Suggested Comment for Question 9:
The safety improvements that were implemented are insufficient and fall short of the changes that the community has been asking for. I urge MnDOT to permanently implement the full list of Bring Back 6th phase 1 safety improvements. This includes adding dedicated bus and bike lanes, adding artwork crosswalks at all intersections that are designed by North Minneapolis artists, improving pedestrian lighting, adjusting walk signal timing, and reducing speed limits.