Hennepin Ave S will be reconstructed in 2026. We're organizing to ensure that people biking, walking, and rolling are prioritized in the design.

After months of delay, Public Works is finally bringing forward the final layout for approval by the Minneapolis City Council. Unfortunately the original plan has been changed and 24/7 bus lanes will no longer be included when the new street opens in 2026.

Public Works may claim that this layout is the same as the original plan, however that is not true. The current plan would delay the implementation of 24/7 bus lanes until an unspecified date in the future. There is no accountability and no reason to believe that this will happen anytime soon. This is unacceptable. These bus lanes are urgently needed for the thousands who depend on transit to access their daily needs. 24/7 bus lanes must be included on day 1 of the project's opening.

On May 19, the Public Works & Infrastructure (PWI) Committee passed a staff direction that would restore 24/7 bus lanes on day 1 of the Hennepin Avenue S reconstruction opening. The plan was brought to full City Council and then returned back to committee at the May 25th Council meeting. The layout will once again need to be amended to include 24/7 bus lanes at the June 9th PWI committee meeting.

We are calling on Ward 10 council member Aisha Chughtai to seek a vote on June 9th to amend the Public Works Department recommended design and RESTORE the original layout, and we are calling on the members of the PWI Committee Members Andrew Johnson, Elliott Payne, Robin Wonsley Worlobah, LaTrisha Vetaw, and Emily Koski to support and vote for this amendment — including all day 24/7 bus lanes on Day 1! 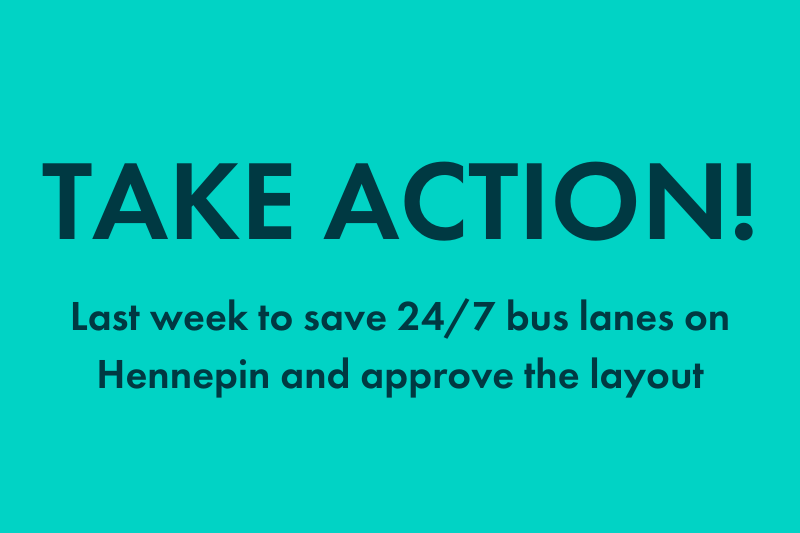 Rally at the Mayor's Office!

Send an Email to All Project Leaders

Hennepin Avenue is due to be reconstructed. This survey captures your experience on Hennepin and feedback for the proposed designed. It takes less than five minutes to complete!
Click here to take the survey

Read the letter from Minnesota Senators and Legislators

With 24/7 bus lanes removed from the Hennepin Ave S design, transit riders will be left behind. Agencies including Metro Transit, the Metropolitan Council, and the City have described the importance of these lanes in meeting our climate and equity goals. We're invited key decision makers to canvass with us and hear directly from the people most impacted by this project.

Find contact information below. This table is best viewed on desktops and larger screens.