Transportation is one of the top issues at the State Legislature this year and is already getting a lot of media attention. As it should--investing in a modern transportation system is critical for Minnesota's economic competitiveness and quality of life.

But walking and biking have mostly been left out of that conversation so far. The Star Tribune ran a 1600-word central spread on transportation last Sunday "Minnesota's broken bridges, ruined roads: All agree something must be done" without a single mention of walking or biking. Ditto for the Pioneer Press.

We are a member of Move MN and support a comprehensive transportation funding bill that includes important funding for roads, transit, biking, and walking. We recognize and support increased funding for all modes, but also want to make sure that biking and walking are included strongly.


Ask Governor Dayton to include bike/walk in his transportation proposal

Governor Dayton is finalizing his budget proposal, which is sure to include a transportation bill. Please send him a message telling him to include biking and walking as a strong part of that proposal. This is an important time--please take action.

General Message:  Please include biking and walking strongly in your transportation proposal

*tell your personal reason why biking and walking is important for you.


8 reasons why biking and walking should be a strong part of any state transportation bill:


1. Biking and walking offers a great return on investment.

Transportation investments are about improving lives and communities not just pavement or paint. Improving walking and biking is very affordable in transportation terms and attracts people and business to our state, improves public health, reduces pollution, saves families money, and gets people to work, school, and more. The $25 million investment in Bike Walk Twin Cities from 2007-2013 helped support a 60% increase in biking and a 14% increase in walking. This led to many quantified benefits, including fewer cars on the road, big health cost savings, and air and carbon pollution reductions. 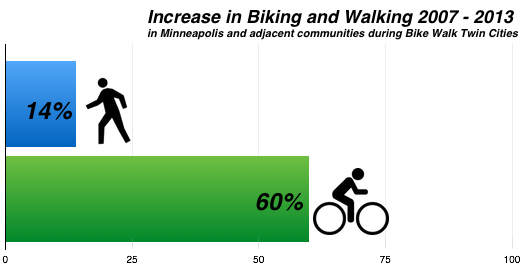 2. Residents across the state support more funding for biking and walking.

A statewide poll by the Minnesotans for Healthy Kids Coalition in November, 2014 found that 65 percent of Minnesotans support including additional funding for biking and walking as part of any state transportation funding package. Support was highest in Minneapolis and St. Paul, but a majority of people supported biking and walking funding in all parts of the state. 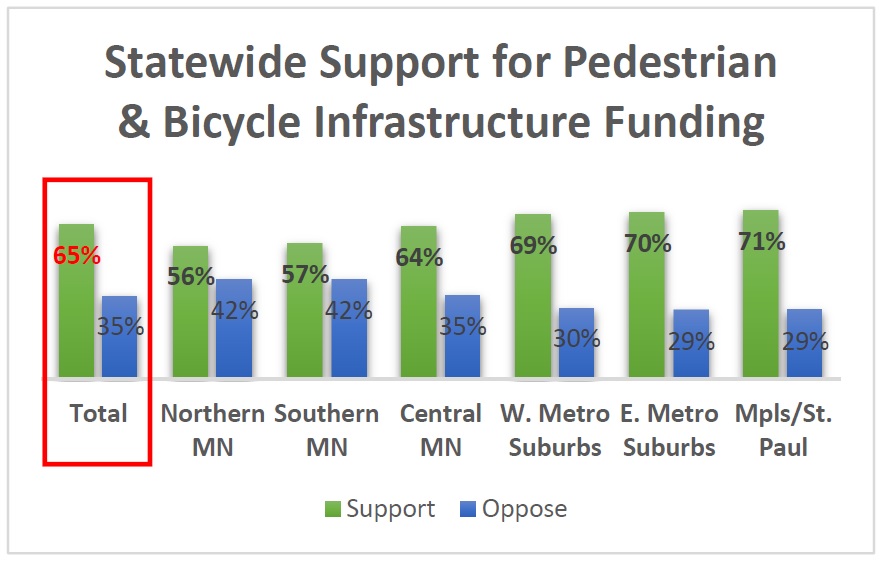 3. Walking and biking are a critical part of our transportation system.

8 percent of all trips in the Minneapolis-St. Paul region are by walking and biking (see graph). That's about 800,000 trips a day, according to the Metropolitan Council. While the numbers are less outside the Metro (and there is no similar survey done), biking and walking are also very important to many communities for Main Streets, trails, and more across the state. There are dozens of Complete Streets policies in Greater Minnesota from 900-person Battle Lake to 100,000-person Rochester. 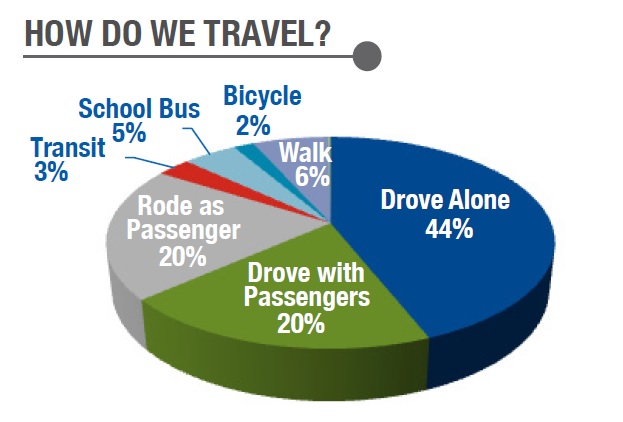 267 people were killed walking and biking on Minnesota streets from 2008 to 2013, according to Minnesota Dept of Public Safety data. That is 11% of all traffic fatalities. And thousands more were seriously injured. That is not ok and needs investment to improve.

5. Walking and biking are growing in importance. 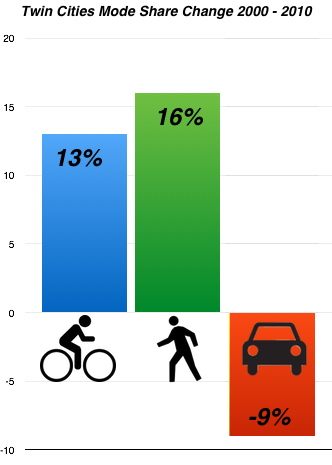 
6. State and regional funding in biking and walking is tiny and unacceptable. 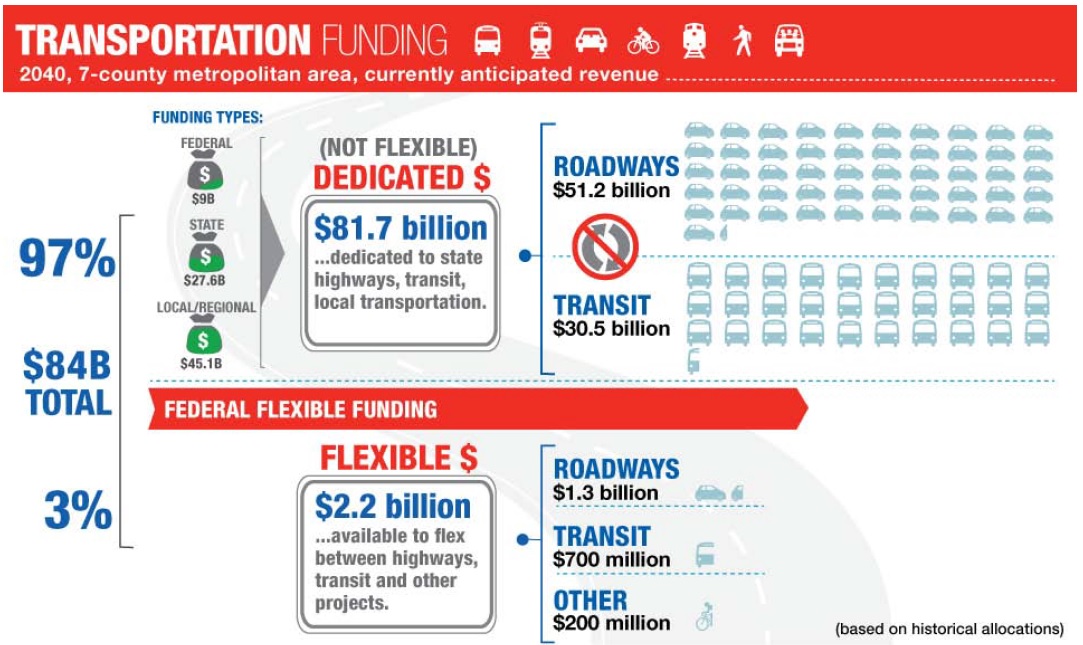 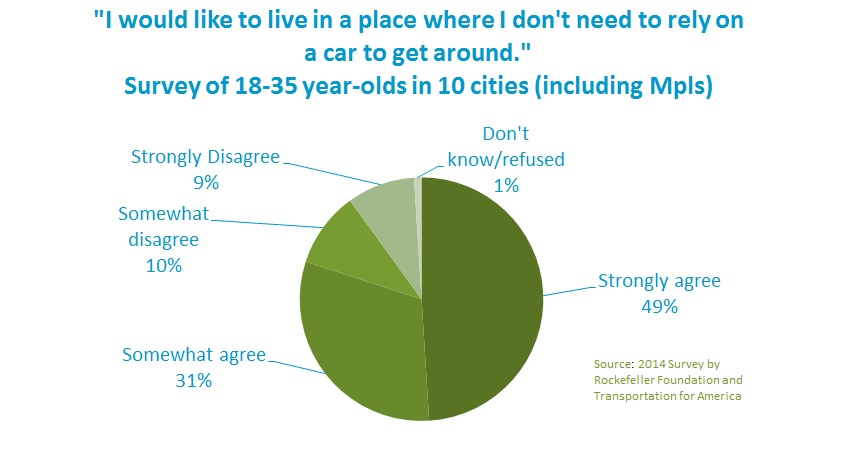 While biking and walking projects are much less expensive than road, bridge, and transit projects, there are significant unmet funding needs for new sidewalks, protected bikeways, crosswalks, bike lanes, and more.  The Minneapolis 2030 Bicycle Master Plan alone is estimated at more than $200 million (for a fantastic network of bike routes) and many other cities have biking or walking plans that need funding. The State should have a role in supporting local biking and walking projects.