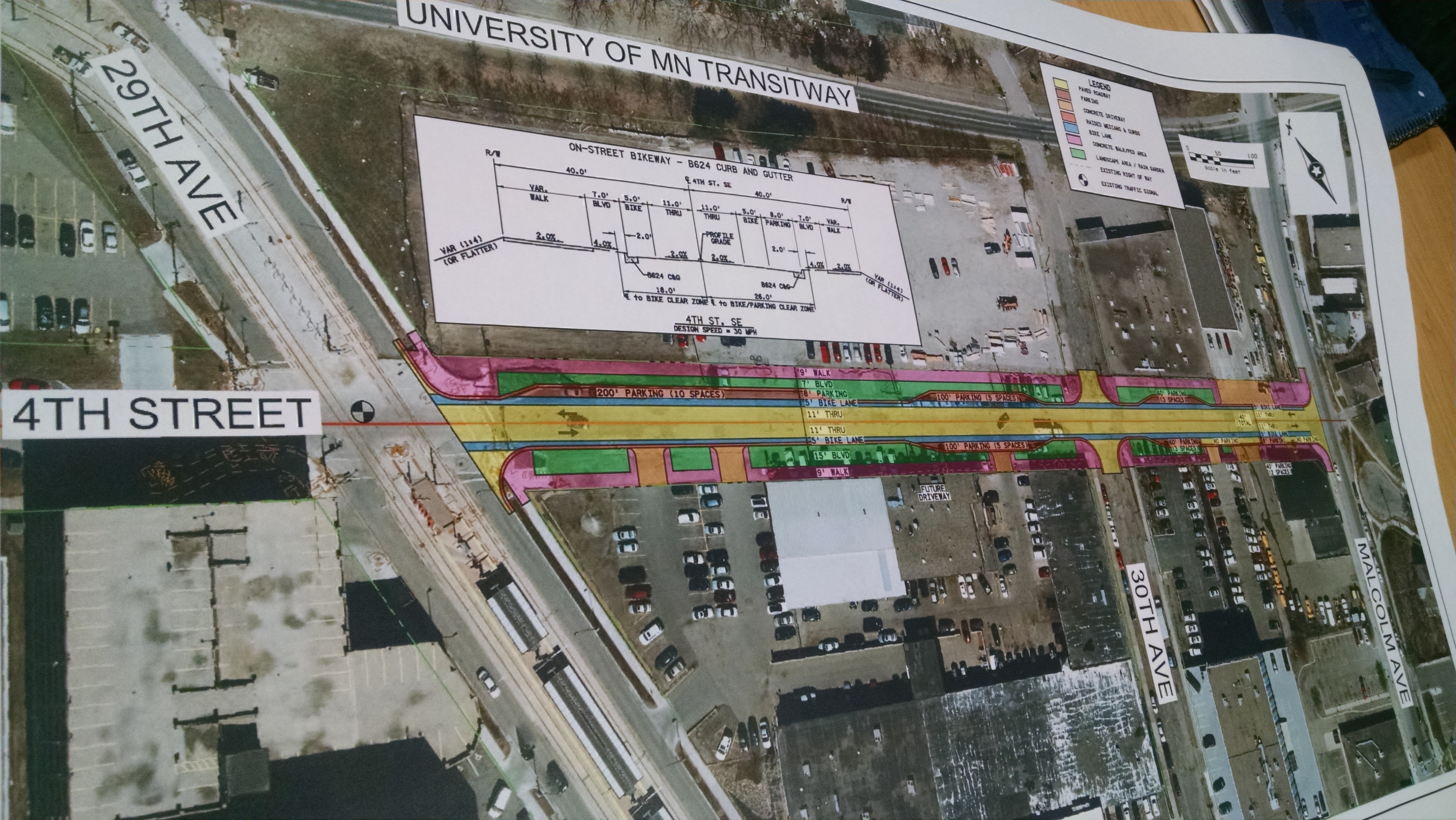 4th St SE between Malcolm Ave SE and 29th Ave SE is an area undergoing significant redevelopment in the near future, with plans for a grocery store as well as several apartment buildings along 4th St SE. The area was planned as an innovation district, but will likely look more conventional after conversations with property owners. Beverly Warmka sought recommendations from the BAC on two issues:

This project will go before the City Council for approval in July, and construction on this project is slated happen in 2016.

The City of Minneapolis CPED and the Minneapolis Parks and Recreation Board (MPRB)are working to create a framework for the public realm in downtown Minneapolis, focusing on placemaking in downtown to increase safety and activity.

MPRB is revising their Downtown Service Area Master Plan, and looking for assets that could be turned into a new park - either a large park, or a series of smaller pocket parks. CPED is working on a Downtown Public Realm Framework, bringing many small neighborhood initiatives together and combining with the protected bikeways plan and others to identify priority areas for improving the public realm in downtown Minneapolis. They're moving from collecting and assessing data to initiating a  community engagement process.

To give input and feedback to improve the downtown area, check out this interactive map and record your favorite downtown parks places and the routes you use to get there. Feedback will be accepted with this map until September 1, 2015.

The BAC brought up the importance of 3rd Avenue as a bikeway, the downtown bike center, and the impact that this framework will have for bikers in downtown, particularly discussing the importance of more bike parking as a core feature of downtown, not just an "amenity."

This framework will go before the City Council for adoption in December 2015.

Parking will be removed from 8th Ave NE on the north side from Sibley St NE to University Ave NE, and on the south side from Marshall St NE to University Ave NE. The main challenge is that businesses along this stretch (Elsie's and the Yacht Club) use loading zones along 8th Ave, which could interfere with protected bike lanes. The City proposes to maintain a left turn lane from 8th Ave N to northbound Marshall St NE, meaning that the bike lane may be unprotected for half of that block.

This month the City will be doing community outreach with Elsie's and Catholic Eldercare, which has a new development planned that will have access to 8th Ave NE.

The City will be at the St. Anthony West Annual Meeting in Dickman Park on July 9th at 6:30 pm to discuss this project with neighborhood residents.

Construction on this project is planned for 2015.

The next BAC Engineering subcommittee meeting will be July 21, 4-6pm.