This guest blog post is written by Sean Hayford Oleary, chair of the Richfield Bike Advocates. Richfield is the first-ring city immediately to the south of Minneapolis, bordering the Armatage, Kenny, Windom, and Diamond Lake neighborhoods. It was named a Bicycle Friendly Community in 2013, but with a substantial portion of its current streets built in the post-war suburban boom, Richfield is continuing to work to transform itself and its streets for the 21st century.

In 2016 and 2017, 66th Street will be reconstructed by Hennepin County and the City of Richfield. The entire Richfield length between TH 77/Cedar Avenue and CSAH 31 York/Xerxes Ave will be rebuilt. As we speak, design features are being decided that could have a major impact on cycling and walking along this street. You can help make this street safe for cycling by attending an open house this Thursday.

Although 66th is located four blocks south of the Minneapolis border, the street plays an important role in South Minneapolis transit and bicycle transportation. 66th is the longest east-west street south of Lake Street, and the first major E-W transit corridor. It's home to many regional destinations, including Cedar Point Commons (Target), Veterans Park, the Hub, 66th & Lyndale, Woodlake, as well as the Southdale commercial district in Edina. The Richfield Bike Advocates would like to see the street be as significant for bicycling as it is for cars and transit today. 66th is already well-connected to bicycle facilities. It is has on-street access into the Minneapolis bikeway network today, at Lyndale Avenue and Bloomington Avenue. Soon, the east end of the street will connect to the Intercity Regional Trail, bridging the gap between the Minnesota River and Lake Nokomis. Future north-south routes are also planned at Portland Avenue, Pleasant Avenue, and Oliver Avenue.

But of course, connectivity does no good without a safe, unintimidating street. And 66th Street today is anything but. The older sections are a traditional 4-lane, undivided format, dangerous for nearly all kinds of road users. To the west, a massive five-lane section sees cars comfortably in the 40 mph range. Very little of the street has any boulevard or shelter for pedestrians, and no section has a bicycle facility. However, that could all change as part of this reconstruction. The City and County are considering protected bike lanes (or cycletracks) along the roadway. This would allow safe, dignified bicycle access for all ages and abilities of bike riders. With well-constructed cycletracks, 66th Street could be the best and longest bikeway south of the Greenway. You could ride from the Lake Nokomis area nearly to Southdale without leaving a safe bicycle route. In the near future, you could ride from Armatage to the Minnesota River on a safe, direct route. 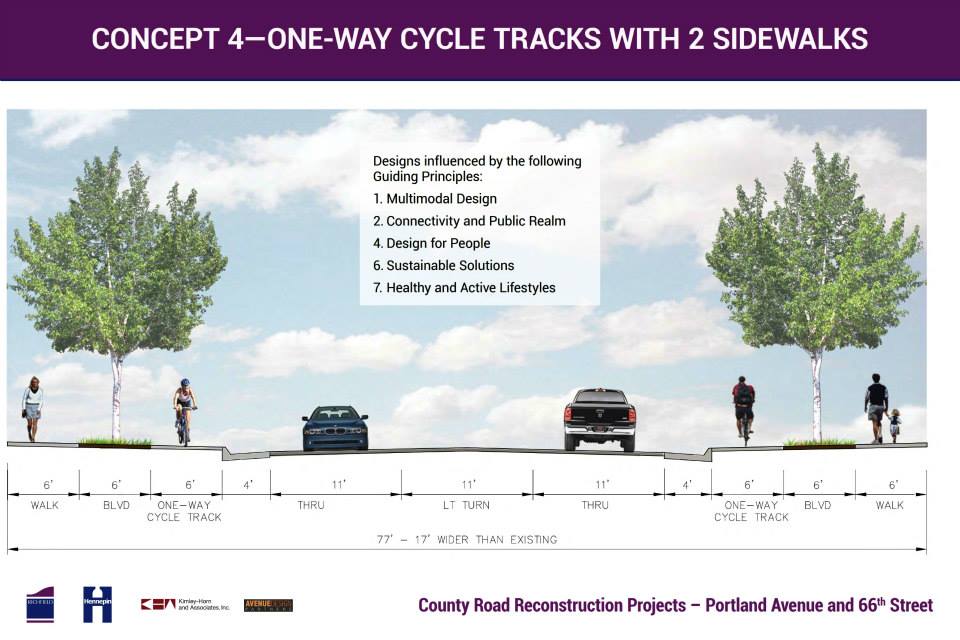 Preferred layout for 66th: Cyclists of all ages and abilities ride safely on one-way cycletracks 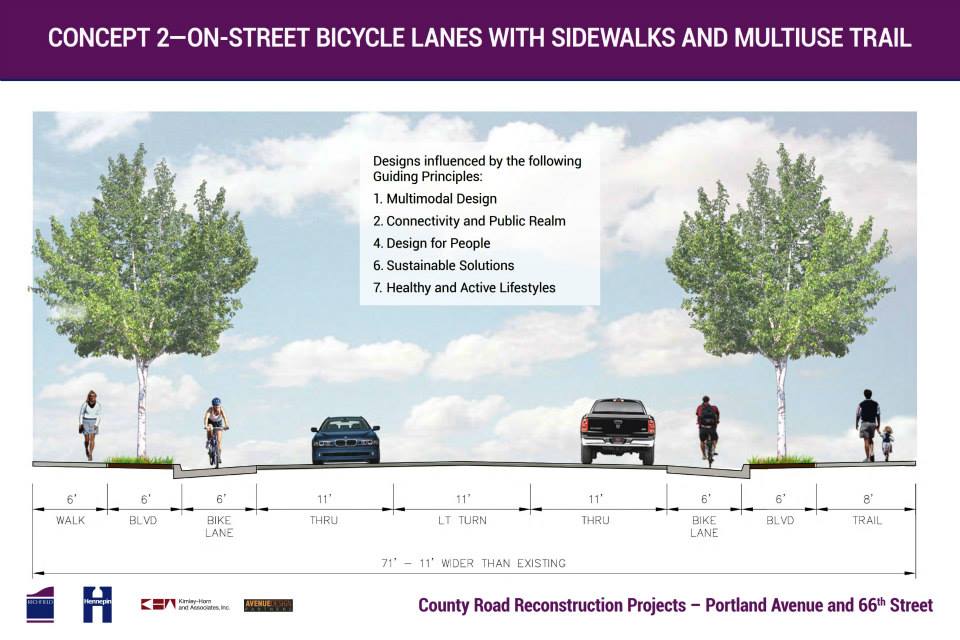 The alternative (narrower) layout suits experienced cyclists, but those who want to avoid traffic must share a narrow shared-use path with pedestrians, and face significant risk at driveways and intersections.

And you can make this happen. Although construction costs are similar, more width and more land acquisition is needed to support cycletracks. As such, we need to see significant community support for cycletracks in order to make them a reality. Please attend the upcoming open house to voice your opinion in favor of cycletracks on 66th Street.